Reviews of articles by: Coral Davenport 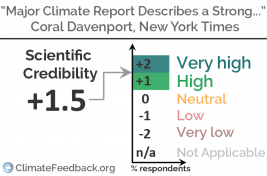 in The New York Times, by Coral Davenport

This story in The New York Times covered the October release of the IPCC’s “Global Warming of 1.5 °C” report. Scientists who reviewed the story found that it provided an accurate and detailed summary of the report, though some statements about warming being “worse than previously thought” could have used some clarifying context.