Reviews of articles by: David Wallace-Wells 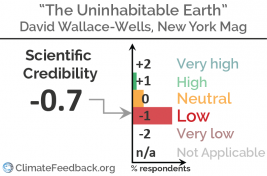 “While it is clear that ongoing warming of the global climate would eventually have very severe consequences, the concept of the Earth becoming uninhabitable within anywhere near the timescales suggested in the article is pure hyperbole. The author has clearly done very extensive research and addresses a number of climate threats that are indeed major issues, but generally the narrative ramps up the threat to go beyond the level that is supported by science.”