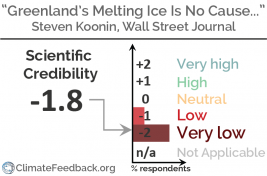 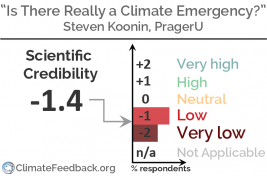 in PragerU, by Steve Koonin

"The author of this video, Dr. Steven Koonin, says he is following the scientific reports published by the UN and US government, but by subtly changing wording and choosing not to mention important context this video is very likely to mislead readers. This style of selective wording and lack of context, an approach called “cherry picking”, applies to every one of Dr. Koonin’s scientific comments." 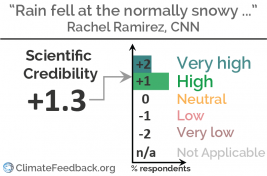 Rain fell on Greenland summit for the first time on record, as accurately reported by CNN

in CNN, by Rachel Ramirez

"The article is highly factual. One issue that we have is the lack of data over the Greenland Ice Sheet (both spatially and temporally). Thus some of the claims, although backed by the limited data, are valid; we can't be sure that we may have missed similar outliers. For example, we can't be sure that a rain event of the type described did not occur in the period before observations were made or may have occurred somewhere on the ice sheet before in a region without any observations." 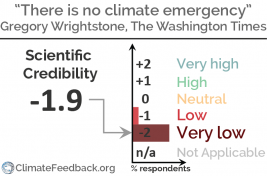 in The Washington Times, by Gregory Wrightstone

"This article recycles old tropes such as “it’s been warm before”, “CO2 levels have been higher in the past” (millions of years ago!), “CO2 is plant food”, “warming is good for ecosystems/humans”, “so far impacts are small, so they will remain small”, etc. All these pseudo-arguments have been addressed many times before (see examples here, here, and here). This article is clearly motivated, misleading and biased." 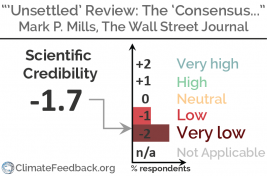 in The Wall Street Journal, by Mark P. Mills

Scientists who reviewed the article found that it builds on a collection of misleading and false claims. For instance, Koonin states that “Greenland’s ice sheet isn’t shrinking any more rapidly today than it was eighty years ago”. Contrary to the claim, scientific studies using airborne and satellite altimetry observations show considerable thinning has occurred along the margin of the Greenland ice sheet since 2003. 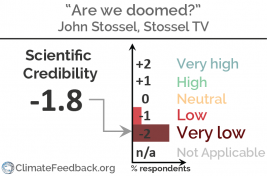 "This video is misleading in so many ways it’s hard to know where to begin. For a start there’s a repeated assertion that climate “alarmists” won’t enter debate on climate change, but there are many examples of renowned climate scientists such as Gavin Schmidt, Michael Mann and David Karoly entering into debates with climate change denialists. Many scientists have found such debates to be unhelpful as they give the false impression of balance despite there being broad consensus among climate scientists..." 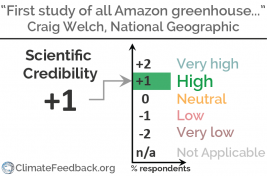 Destruction of the Amazon forest very likely contributes to global warming, as accurately described in The National Geographic article

"The article is good overall, although there are two small issues. First, the title seems to overestimate the results. The scientific study the National Geographic article is based on cannot account for all of the climate forcers, as there are no Amazon basin wide estimates (as clearly stated in the study). This drawback could potentially change the overall warming effect, and therefore the title seems to exaggerate." 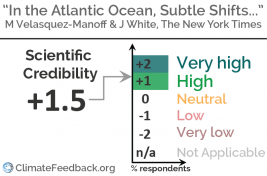 Atlantic ocean circulation system is slowing down, as accurately described in The New York Times article

in The New York Times, by Moises Velasquez-Manoff and Jeremy White

"This article is well-written, and the visuals are outstanding. It is a very strong piece of science communication. That being said, there is at least one error. The author mistakenly conflates the long-term warming hole with the shorter-term North Atlantic cold anomaly. The two phenomena have very different timescales and are likely driven by different mechanisms." 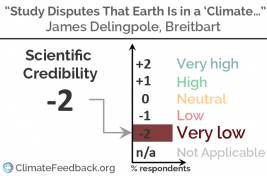 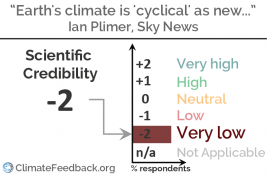 in Sky News, by Ian Plimer

"This video is chock full of false and misleading information, and presented in a way to make the correct scientific information seem like a farce. For example, the direct link between human emissions of carbon dioxide and global warming is very well established. The physics and chemistry of this link has been understood for well over 100 years, and science continues to affirm it."