CLAIM
Less than 5% of carbon dioxide emissions are produced by man [... they] can’t cause 30% of today’s atmospheric carbon dioxide
VERDICT more about the rating framework

DETAILS
Fails to grasp significance of observation: Human activities produce less carbon dioxide than natural processes, but this does not mean that human-caused emissions are insignificant in the atmospheric carbon budget. Carbon dioxide emissions produced by humans since the beginning of the Industrial Revolution have brought an imbalance to the (previously balanced) global carbon cycle, which has led to an unprecedented rise in atmospheric carbon dioxide concentrations. Misrepresents source: The article leans on findings from the Intergovernmental Panel on Climate Change’s Fourth Assessment Report but uses the results out of context to support an inaccurate statement.
KEY TAKE AWAY

Carbon dioxide is a greenhouse gas released by natural processes as well as by human activities. The rapid rise in carbon emissions from burning fossil fuels beginning during the Industrial Revolution upset the natural balance in the global carbon cycle. Human-caused carbon emissions outpaced the ability of natural carbon sinks to absorb excess carbon dioxide, resulting in a rise in atmospheric concentrations from 280 to about 415 parts per million in 2020.

This claim, which was published in August 2019 on the website Issues & Insights in an article titled “A Short List Of Facts Global Warming Alarmists Don’t Want To Face”, has been viewed more than 105,000 times on Facebook in the last three months. The article argues that, since human emissions of carbon dioxide (CO2) are smaller than the total amount naturally circulating in the atmosphere, they cannot have a great influence on climate change.

While it is correct that anthropogenic emissions of CO2 are less than the amount produced and absorbed by natural processes, the author fails to grasp that CO2 emissions produced by human activities are significant because they generate an imbalance between CO2 sources and sinks.

CO2 is a greenhouse gas, naturally released by the ocean, by soil, and by respiring organisms. These sources are only one part of the carbon cycle, a process in which CO2 flows between the oceans, solid Earth, biomass, and the atmosphere. So-called sinks, which include the oceans, soil, and vegetation, remove CO2 from the atmosphere. Based on ice core data, scientists have worked out that the concentration of CO2 in parts per million (ppm) had remained relatively constant for thousands of years. For ten thousand years before the Industrial Revolution, the concentration of CO2 remained between 260 and 280 ppm. During this time, the carbon cycle was balanced.

Human activities, such as fossil fuel combustion, changes in land use, deforestation, and cement production, add to the amount of CO2 emitted into the atmosphere. Earth’s natural carbon sinks are unable to absorb the entire volume of CO2 that humans produce. Currently, natural sinks can absorb a little more than half of human CO2 emissions, with half of this amount going into the oceans and half into plants and soil. The remainder of human emissions cannot be absorbed and remain in the atmosphere. As a result, atmospheric CO2 concentrations have risen from around 280 ppm in the eighteenth century to about 415 ppm in 2020. In the 1950s, Charles David Keeling and other scientists began observing CO2 concentrations at Mauna Loa Observatory, which have steadily increased to the present day. 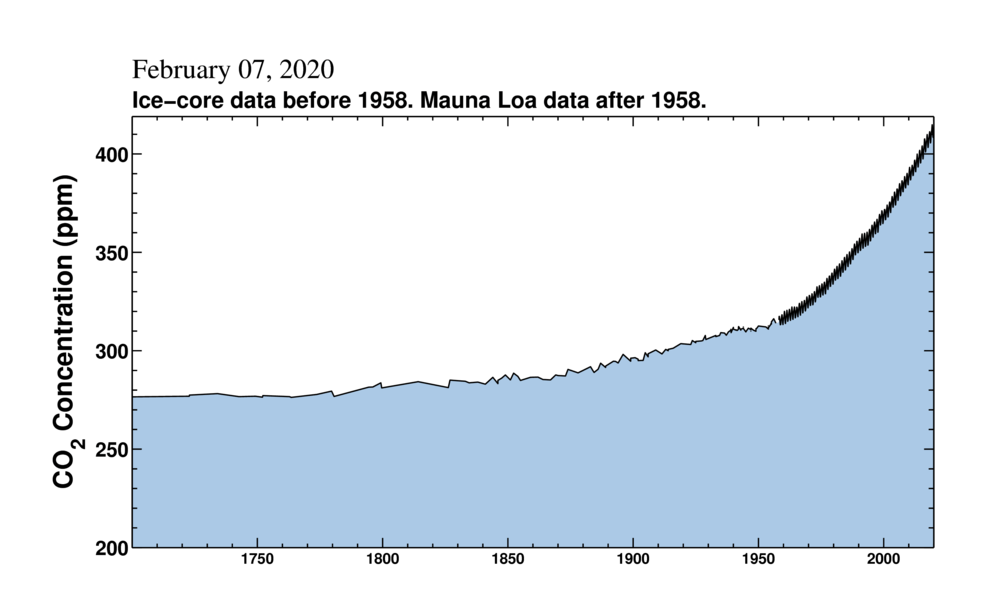 Figure — The Keeling Curve, from 1700 to the present: The early data was derived from ice cores and the data since 1958 was collected at Mauna Loa Observatory. Credit: University of California San Diego, Scripps Institution of Oceanography, 2020. Source.

The vast body of scientific research agrees that recent increases in carbon emissions are due to human activities. The IPCC Fourth Assessment Report succinctly states:  “Yes, the increases in atmospheric CO2 and other greenhouse gases during the Industrial Era are caused by human activities.”[3]

Similarly, Ralph Keeling, a geochemist at the Scripps Institution of Oceanography at the University of California San Diego wrote:

“The rise in CO2 is unambiguously caused by human activity, principally fossil-fuel burning. This is clear from the numbers: We know how much fossil fuel is converted into CO2 each year and emitted into the atmosphere. The CO2 doesn’t all stay there because some enters the ocean and some is taken up by photosynthesis, which ends up in land plants and various types of biomatter. Carbon atoms are not created or destroyed in any of these processes, […]. It’s true that atmospheric CO2 has almost certainly been higher than present in Earth’s distant past, many millions of years ago. But because fossil-fuel burning is not natural, the recent carbon increases in the atmosphere, oceans, and land biosphere cannot be natural either. [….] even though the levels of CO2 in the air may not be unprecedented, the pace of rise probably is. Few if any natural processes can release fossil carbon into the atmosphere as fast as we humans are doing it now via the extraction and burning of fossil fuels.“

(The full quote can be found here.)

While an atmospheric CO2 concentration of 415 ppm is not unprecedented in the planet’s 4.5 billion year history, the pace of its recent increase is unprecedented in at least the last 800,000 years, based on data from ice core records. “Increases in CO2 never exceeded 30 ppm [in any previous 1,000-year period in the past 650,000 years]—yet now CO2 has risen by 30 ppm in just the last 17 years.”[3] The IPCC Fifth Assessment Report shows that this can only be attributed to the increased pace of human industrialization, growing economies and populations.[2]