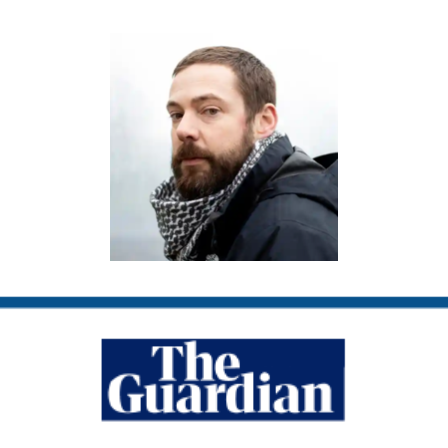 DETAILS
Inaccurate: Deserts reflect solar radiation to space through the atmosphere, cooling the planet. Vegetated areas have an overall warming effect on the planet because they absorb sunlight and increase atmospheric water vapor. Claim in The Guardian article that we need to plant forests in the desert to combat climate change isn’t accurate.
KEY TAKE AWAY

Deserts reflect solar radiation to space through the atmosphere. Because solar radiation isn’t absorbed by the atmosphere, deserts have a cooling effect on the planet. While vegetated areas can reduce temperatures at the ground level locally due to evapotranspiration, they have an overall warming effect on the planet because they absorb more sunlight and heat than deserts. That being said, preventing forests from being cut is an effective way to limit global warming via another mechanism: preventing the carbon stored in trees from being released into the atmosphere.

CLAIM: "Deserts are heat producers, reflecting around 60% to 70% of the solar energy that falls on them straight back into the atmosphere." ; "In addition to sequestering carbon, green areas also help cool the planet" ; Vegetation reduces temperature and solar reflection, creating a stable climate; "If we want to do something about global warming, we have to do something about deserts."

The claim that deserts warm the planet was published in an article by The Guardian in March 2021, which received more than 30,000 interactions on Facebook according to the social media analytics tool CrowdTangle. The article makes several inaccurate or misleading claims about the role deserts play in global warming and climate change.

Specifically, the article makes the inaccurate claim that “Deserts are heat producers, reflecting around 60% to 70% of the solar energy that falls on them straight back into the atmosphere”. As the reviewers describe below, deserts cool rather than warm the planet[1]. Deserts reflect solar radiation to space, meaning it isn’t absorbed by the atmosphere.

The article also claims that areas covered by vegetation cool the planet, however, these dark areas can have a warming effect on the planet because of their albedo effect, which describes how much sunlight is absorbed versus reflected. While vegetated areas can have a cooling effect at the ground level in local regions due to evaporation, they have a warming effect in terms of the global energy balance by increasing atmospheric water vapor, as the reviewers describe below. Furthermore, planting trees has an indirect cooling effect as the trees absorb CO2 while they grow, however, if these habitats are lost through harvesting, natural disasters, or other events, this CO2 will be released. The effects of vegetated areas on temperature are complex and vary between regions.

“Deserts are heat producers, reflecting around 60% to 70% of the solar energy that falls on them straight back into the atmosphere.”

Raymond Pierrehumbert, Professor, University of Oxford:
The statement that “Deserts are heat producers” is absolutely wrong. It is true that they reflect back 60-70% of the sunlight but the reflected light absolutely does not get absorbed by the atmosphere. It just goes right back to space where it came from, and this happens efficiently over deserts since the skies tend to be clear and cloud free. Further, when the surface of the desert heats up, the infrared it radiates gets out to space easily, because the air is very dry and cloud free. Taken together, deserts cool the planet, they don’t warm it.

Christopher Colose, Research Scientist, SciSpace LLC, NASA Goddard Institute for Space Studies:
The claim in the Guardian article that, “Deserts are heat producers, reflecting around 60% to 70% of the solar energy that falls on them straight back into the atmosphere,” misunderstands the impact of reflection on the planetary energy balance, as well as the role of deserts in global climate.

Reflection (or albedo) is a cooling mechanism, not a warming one. Deserts would be even hotter if the sand were black. Because solar radiation that reaches the surface cannot be transmitted through the solid earth, it can only be absorbed at the surface (where the energy is used to evaporate water or raise the temperature of the ground), or the light can be reflected away. Of the light that is reflected upward, most of it passes through the atmosphere and is lost to space, as if it never existed. This is for the same reason light from the Sun coming “downward” reached the surface in the first place– Earth’s atmosphere, especially in the dry subtropics–is rather transparent to solar radiation. If instead a small amount of solar radiation is absorbed by the atmosphere on its passage upward (or downward), this is still not much different than if it had been absorbed directly at the surface anyway. That absorbed energy is still in the coupled surface-atmosphere system. Reflection does not create a source of “new” energy, which of course must be conserved.

Although tropical deserts are hot locally, they are unique regions for the energy balance of the planet. Not only does desert sand have a high albedo, but the hot surface also emits infrared radiation strongly to space through a relatively dry and cloud-free atmosphere. This lack of greenhouse trapping also helps deserts get cold at night. In fact, because the Saharan and Arabian desert regions are bright and effectively lose infrared energy (both cooling mechanisms), the annual mean top-of-atmosphere net radiation is negative over those regions (see figure below), which is unusual for a land region near the equator. Over the Amazon in South America, for example, the outgoing thermal radiation is instead relatively low due to the high moisture content and energy emanating from cold cloud tops. 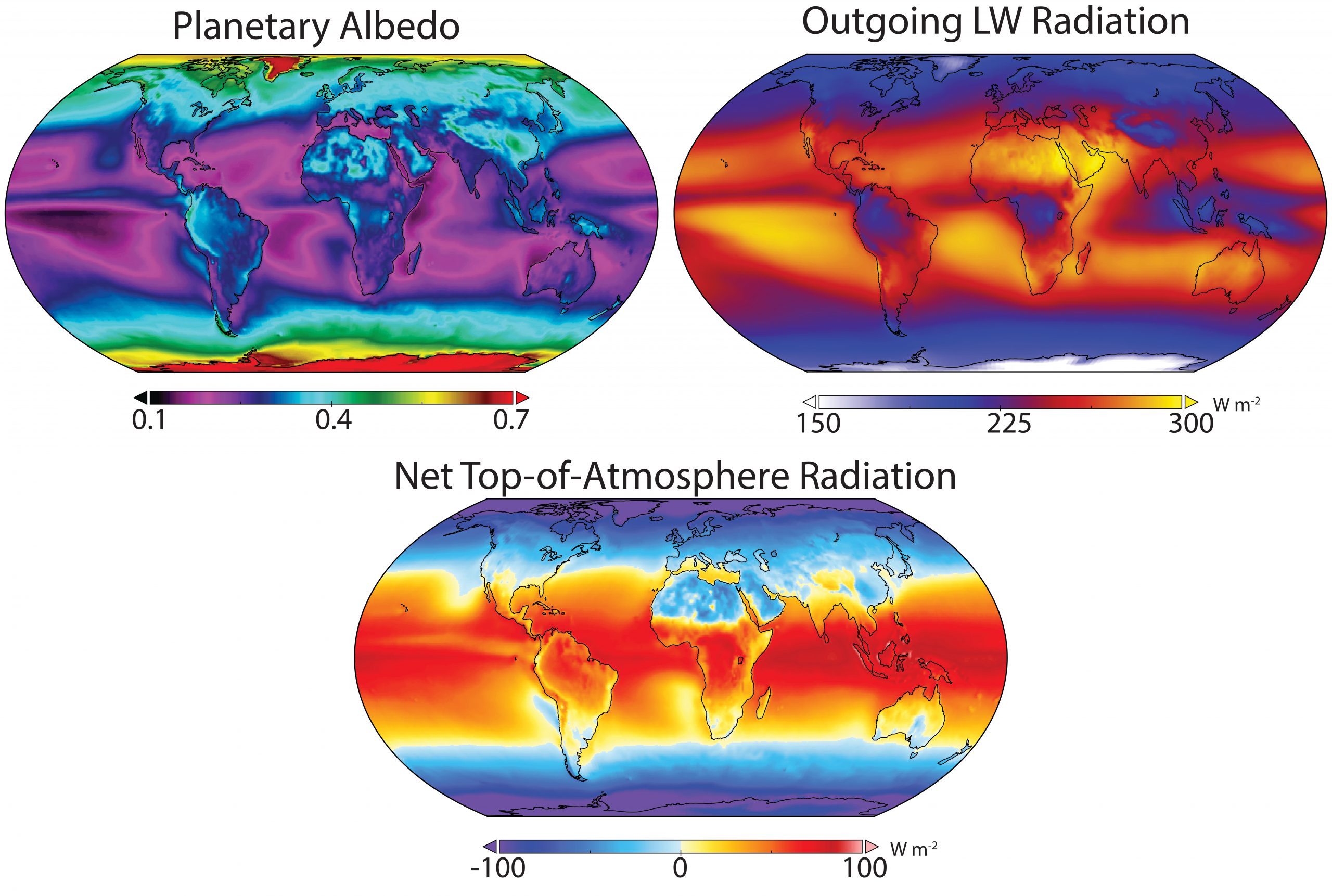 Radiative heating/cooling in the tropics is tightly coupled to vertical motion. The net radiative loss over the large deserts is balanced largely by atmospheric heat transport in the form of air with a high potential temperature flowing in at high altitudes, and descending while being heated adiabatically. This branch of the Hadley circulation continuously provides warm air to the lower atmosphere through subsidence and carries moisture out of the region in near-surface equatorward outflow. The desert surface also has limited evaporation, and so these regions get quite hot, yet are so-called “radiator fins” for the low latitudes that cool the planet[1]. Indeed, the moist part of the deep tropics would be close to a runaway greenhouse state, in isolation, if not for heat transport to the extra-tropics and emission to space from the dry zones in between.

Raymond Pierrehumbert, Professor, University of Oxford:
Greening would take up some carbon, but “sequestering” is the wrong word since the carbon isn’t very securely stored. It is right near the surface where it can easily oxidise back to CO2. The ability of land practices to cause more carbon uptake is real, but the effect is exaggerated in terms of the proportion of the climate problem it can deal with.

But green areas do not cool the planet. By absorbing more sunlight, they actually warm the planet. The statement confuses the local surface energy balance with the global balance. By providing a moist and shaded surface, the evaporation helps cool the ground locally. However, the evaporation just moves heat to another part of the atmosphere. Further, a sufficiently green moist area can cause warming by increasing atmospheric water vapour, though the amount of warming depends on what kind of clouds form, and where. (Clouds reflect sunlight, but both water vapour and clouds add to the greenhouse effect).

“In areas covered by vegetation, much of that solar energy is instead used in evapotranspiration: the process of condensation and evaporation by which water moves between plants and the atmosphere.”

Matthew Huber, Professor, Purdue University:
It is true that locally most sunlight in these regions drives evaporation, not local sensible heating. But this latent heat gain is transferred into latent heat release and warming in convergence (raining) regions, it is not lost to the energy budget of the tropics.

Raymond Pierrehumbert, Professor, University of Oxford:
Yes, evapotranspiration increases, but this only causes local cooling, which is made up for where the energy of the water vapour is released, when it condenses back into the ocean. On the balance, evaporation does not cause a cooling of the planet. Evapotranspiration can move energy away from the local surface, but it cannot move energy into outer space! Only infrared radiation or reflection of sunlight can do that.

Raymond Pierrehumbert, Professor, University of Oxford:
It is absolute rubbish to say that “If we want to do something about global warming, we have to do something about deserts.” There may be local benefits to greening a desert, in terms of the local environment or food production, but deserts cool the planet as a whole, they don’t warm them. Whether human interventions can produce a “stable” greened climate is controversial. The great greening of the Sahara that happened some thousands of years ago was driven by changes in the Earth’s orbital characteristics, which the proposed human interventions don’t duplicate.

Christopher Colose, Research Scientist, SciSpace LLC, NASA Goddard Institute for Space Studies:
Coming back to local afforestation/reforestation and greening efforts in arid places such as Africa or Australia, which have either been proposed or are currently being implemented [e.g., Green the Sinai in the Guardian article, The Great Green Wall (see e.g., Goffner et al., 2019[2])], the goal is usually to geoengineer regional climate toward wetter conditions, which may come with many benefits for local populations. It is also reasonable to expect that in some areas there will be local cooling due to enhanced evapotranspiration and cloud cover, despite the reduced surface albedo due to the darker (vegetated) surface. The reduction in surface albedo could shift the tropical rainbelt known as the Inter Tropical Convergence Zone northward, bringing rainfall to the desert, a biogeophysical feedback recognized by Charney in the 1970s[3].

However, the broader climate effects and sustainability of such efforts, even if scaled up beyond the Sinai domain, are complicated. Modeled climate impacts of such proposals even locally are complex, with Sahara greening altering local atmospheric circulation, such as the African easterly jet and the intensity of the monsoon winds in the Sahel (e.g., Yosef et al. 2018; Kemena et al. 2018[4,5]), or changing dust fluxes (as is important during past “Green Sahara” episodes)[6]; that dust also contain iron and other nutrients that fertilize the ocean, which could affect productivity in other regions. The self-sustainability of this geoengineering is also in question, since much of the evapo-transpired water is precipitated in areas removed from the greening project (e.g., Kemena et al. 2018[5]). Because the desertification/greening in Africa can have impacts globally, even in the polar regions[7,8], more comprehensive assessments with Earth system models are needed before deployment, in addition to discussions of ethics and geopolitics. 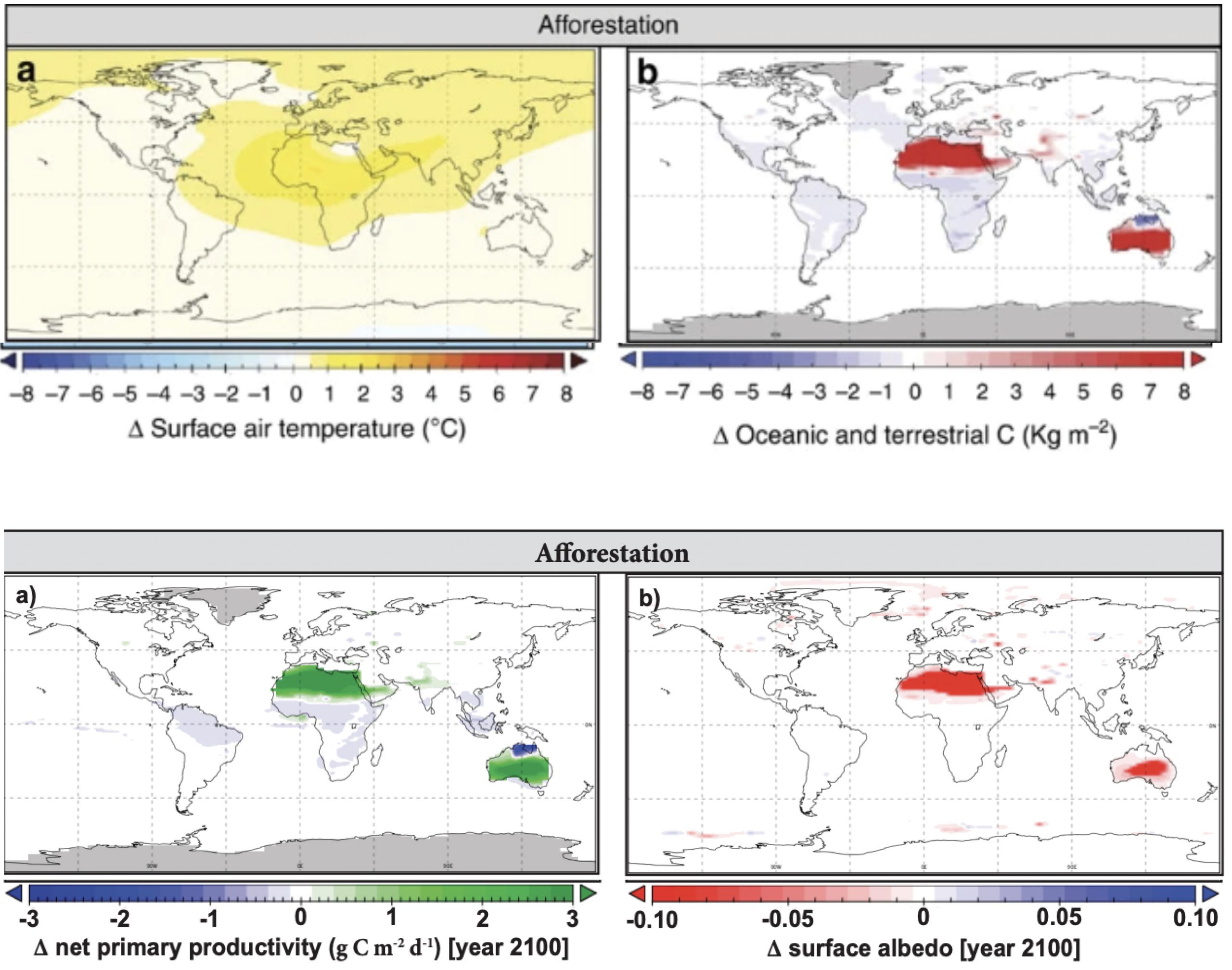