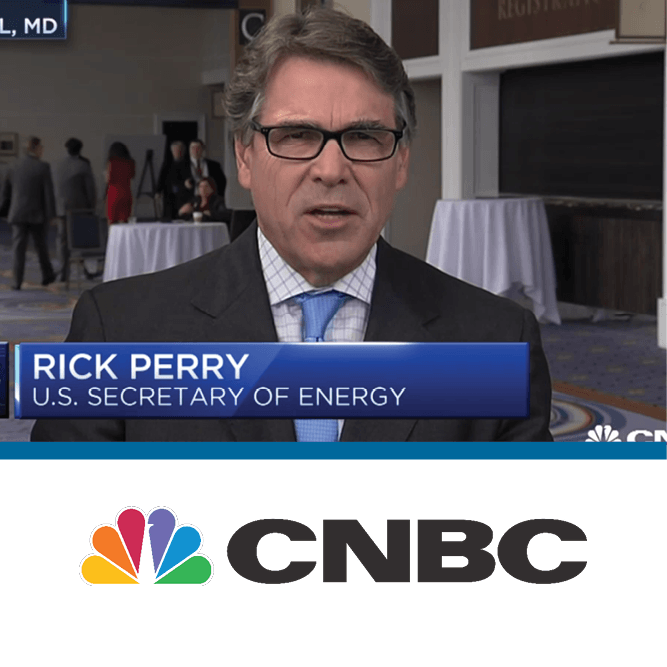 CLAIM
Most likely the primary control knob [on climate change] is the ocean waters and this environment that we live in.
VERDICT more about the rating framework

DETAILS
Misleading : While oscillations in the distribution of ocean temperatures are an important source of natural variability, this does not change the total amount of energy in Earth’s climate system. The increase of carbon dioxide and other greenhouse gases is the primary reason for modern global warming.
Lacks specifics : It is unclear what climatic factors are or are not included in the phrase “and this environment that we live in”.
KEY TAKE AWAY

The best scientific understanding of modern climate change is better summarized by the title of a 2010 study published in the journal Science: “Atmospheric CO2: Principal Control Knob Governing Earth’s Temperature”.

CLAIM: No, most likely the primary control knob [on climate change] is the ocean waters and this environment that we live in.

Patrick Brown, Assistant Professor, San Jose State University:
If we define climate change as the increase in global temperatures that have been observed since the industrial revolution, then Secretary Perry’s statement is false. Human-caused increases in atmospheric CO2 represent the single largest cause of the Earth’s uptake of heat over that time period. 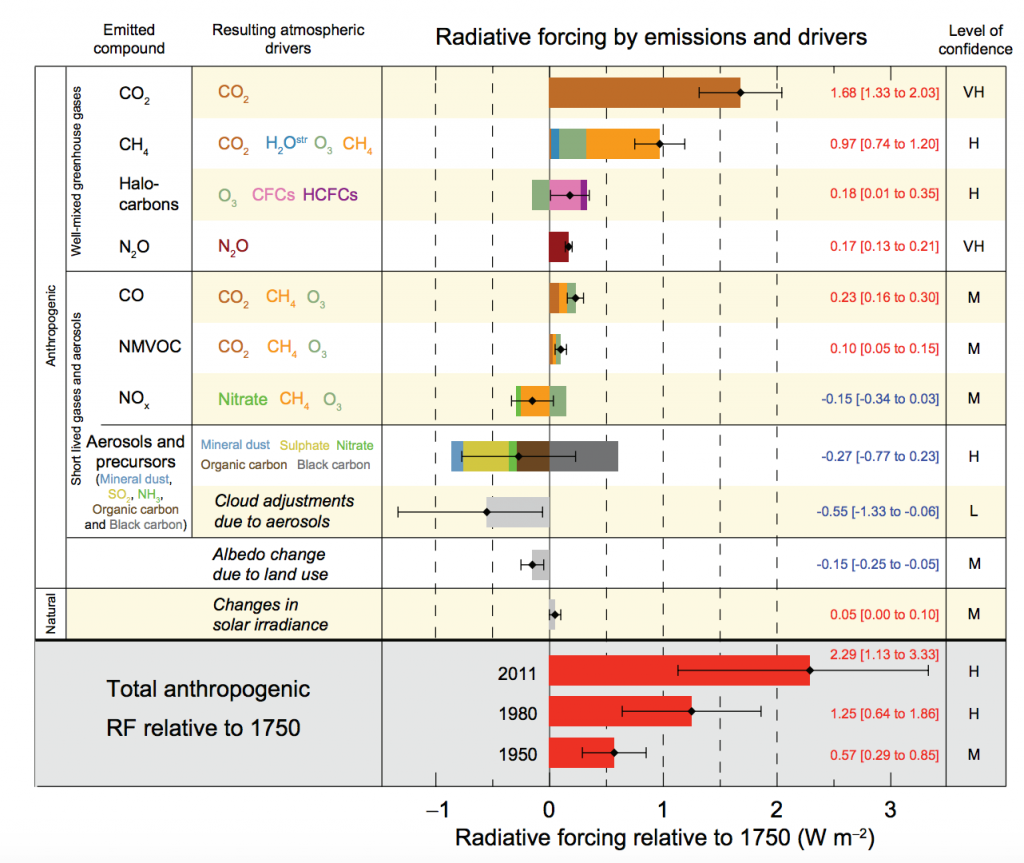 The influence of various drivers of climate change on the amount of Earth heat-uptake since 1750. From IPCC (2013)1.

It is true that natural changes in ocean circulations, combined with other aspects of “this environment that we live in”, can influence global temperatures from year-to-year and from decade-to-decade. Thus, these natural changes can alternatively mask or exaggerate the long-term warming trend for as long as a few decades2. However, these natural changes tend to “cancel out” in the long-run such that they cannot be responsible for the sustained warming that we have seen since the industrial revolution.

Agus Santoso, Senior research scientist, University of New South Wales:
At first impression, this is actually a not-quite-straight-forward question to answer. It is understandable that someone gives an answer like: “No, most likely the primary control knob is the ocean waters and this environment that we live in.”

But such answer is also not correct. Why?

First, there should be many knobs in the Earth’s climate system. It is a complex system: its various components (oceans, land, atmosphere, cryosphere) are coupled together and interact with one another. The system constantly fluctuates, and all the knobs are turning. Because it is a coupled system, turning one knob will turn another, etc. This complexity makes it hard for people to comprehend there is one single knob that controls everything.

The ocean, and thus the Earth, warms and cools naturally on various time scales, even when CO2 is kept constant. For instance, from time to time more cold deep water is brought up to the surface by the strengthened Trade Winds along the equatorial Pacific. Such condition occurring during a certain year is referred to as the La Niña phenomenon, and in effect the global temperature falls. The reverse is called El Niño. Similar conditions are also seen on inter-decadal time scales—referred to as the Interdecadal Pacific Oscillation. Think of the recent “global warming hiatus” associated with a decadal La Niña-like condition1.

So the Pacific Trade Winds can be considered as a knob, right? Imagine if we can control the Trade winds to prevent the Earth from warming or cooling too much. This fact alone makes it hard for certain people to comprehend that there is anything else other than the ocean system that can be considered as a knob. But of course that’s not the only thing. Consider ice cover and the albedo effect, for instance. (E.g. when there’s less sea-ice, more solar radiation is absorbed due to low albedo, warming the Earth—let’s dump more ice on planetary scale so we can reduce global warming?)

So how about CO2? Atmospheric CO2 is a potent greenhouse gas and being a greenhouse gas it keeps the planet warm2. Increasing CO2 does warm the planet further, but it’s not as simple as that. We also need to consider its indirect effect: how it changes ocean and atmospheric circulations and sea-ice, glaciers, as changes in all of these then can influence the Earth’s temperature. Further, as circulation changes, weather also changes, so we need to watch out for changes in the pattern and frequency of extreme events.

Because we humans as aggregate emit CO2 at a rapid rate, largely due to fossil fuel consumption, CO2 can be considered as a “primary control knob” in the sense that it is the most obvious and available knob for us to turn to influence the climate. Although we cannot directly influence other knobs such as the ocean heat pump mentioned above, we can in effect through the CO2 knob—keep in mind the background noise, i.e., natural variability, still operates. That is not saying that there are no other knobs that we can turn. Land-use is one factor that is also important, as land-use changes can affect climate. Land-use changes also affect atmospheric greenhouse gas concentration (e.g. think of all the smoke coming from burning forests for agriculture). In essence, CO2 is humans’ primary climate control knob.

Jonathan Gregory, Professor, University of Reading and UK Met Office Hadley Centre:
If the ocean were the primary control for global mean surface temperature change over decades, we would expect that the ocean below the surface would get cooler while the surface gets warmer, in order to conserve energy. In fact, observations show that the subsurface ocean as well as the Earth’s surface has warmed up over the last few decades. That means the total of the energy stored has been increasing. This extra energy must have come from outside the climate system. Evaluation of the Earth energy budget using observations and models indicates that the increase in stored energy over the last few decades, mostly taken up by the ocean, is about one-third of the extra energy absorbed as a consequence of changes in the composition of the atmosphere due to human activities, predominantly emissions of carbon dioxide. If there were no ocean, the rise in surface temperature would be larger; the effect of the ocean is to mitigate the temperature rise, rather than to cause it. The other roughly two-thirds of the extra absorbed energy has been radiated back to space. 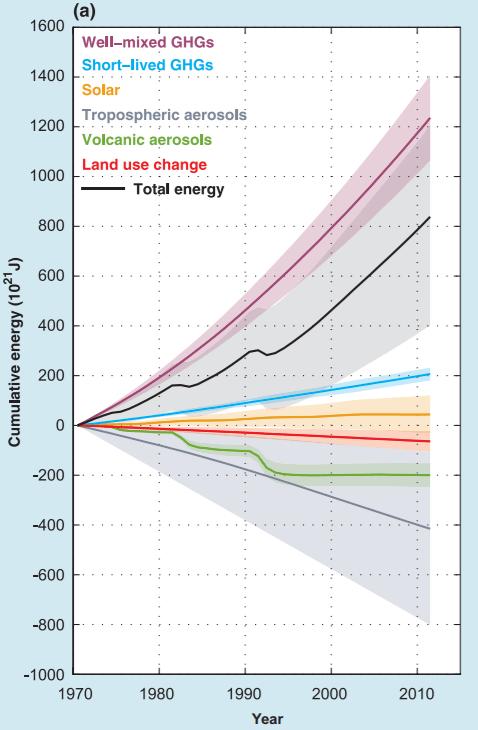 Shaun Lovejoy, Professor, McGill University:
[Taken from a review of a similar claim.]
Let’s say you are given only three pieces of information:
a) The annual average value of the global temperature from 1880 to 1909
b) The atmospheric CO2 concentration for each year
c) The effective climate sensitivity