CLAIM
That one little burp by Mt. Etna has already put more than 10,000 times the CO2 into the atmosphere than mankind has in our entire time on the Earth
VERDICT more about the rating framework

DETAILS
Factually inaccurate: Each year, humans emit far more CO2 than all eruptions around the world combined.
KEY TAKE AWAY

It's true that carbon dioxide is among the gases emitted by volcanic activity. However, it's clear from several lines of evidence that human activities are producing far more carbon dioxide, and volcanoes are not responsible for the observed increase in greenhouse gases.

CLAIM: That one little burp by Mt. Etna has already put more than 10,000 times the CO2 into the atmosphere than mankind has in our entire time on the Earth but don't worry, a scam is in the works to tax you for your miniscule footprint…

Carbon dioxide is released into the atmosphere by volcanic eruptions—as well as by passive venting around volcanoes that are not erupting. The amount of CO2 emitted varies from one volcanic feature to another, and varies with time, which makes quantifying global emissions a challenge. However, there are multiple ways of constraining their contribution.

The most recent estimate1 puts total global emissions from all volcanic activity at approximately 280 million to 360 million metric tons of CO2 per year. Of this, active eruptions only account for about 2 million metric tons per year. Additionally, there is no evidence that volcanic activity has increased over the last century, while atmospheric CO2 has increased significantly.

Human-caused CO2 emissions are much larger than this estimate. Current emissions from fossil fuel burning, industrial processes, and land use change (like deforestation) equal about 39 billion metric tons per year2—at least 100 times greater than the amount released by all volcanic activity, let alone eruptions. 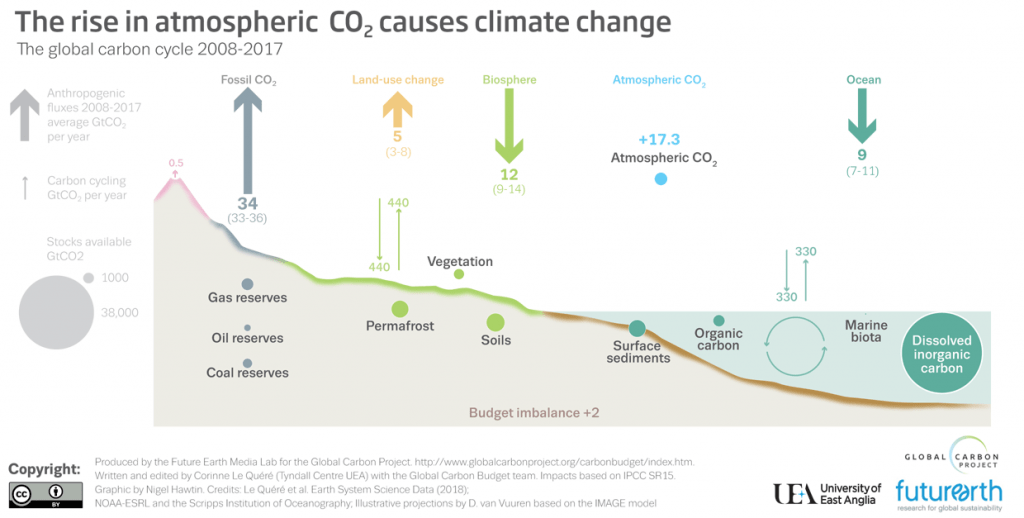 Prior to human-caused emissions, Earth’s carbon cycle was in balance. The amount of CO2 released by things like volcanoes, wildfires, and respiration by living things was equal to the amount of atmospheric CO2 taken up by processes like bedrock weathering and photosynthesis. Human-caused emissions are not matched by a human-caused process of CO2 uptake, so this net addition is responsible for the observed increase in atmospheric CO2 since the Industrial Revolution.

Tobias Fischer, Professor, University of New Mexico:
The contribution of volcanoes to the global carbon dioxide (CO2) emissions budget is small1-16 compared to the emission from burning of fossil fuels17. In detail, the contribution of volcanic eruptions can be illustrated by considering recent, well-studied large eruptions, such as the 2014 Holhuraun eruption in Iceland.

The burning of fossil fuels and production of cement has released 36.3 gigatons of CO2 (or 36,300 x 1012 g CO2) into the atmosphere in 201517. Therefore, the largest CO2 emitting eruption in the past 15 years (Holhuraun in 2014) produced only about 0.026% of the yearly anthropogenic emissions. Indeed, we would need to have about 3,890 such massive eruptions like Holhuraun in one year to produce the equivalent of CO2 emitted due to fossil fuel burning and cement production. However, such large CO2 emitting eruptions are rare and the Holuhraun 2014 eruption is unique in the past 15 years18.