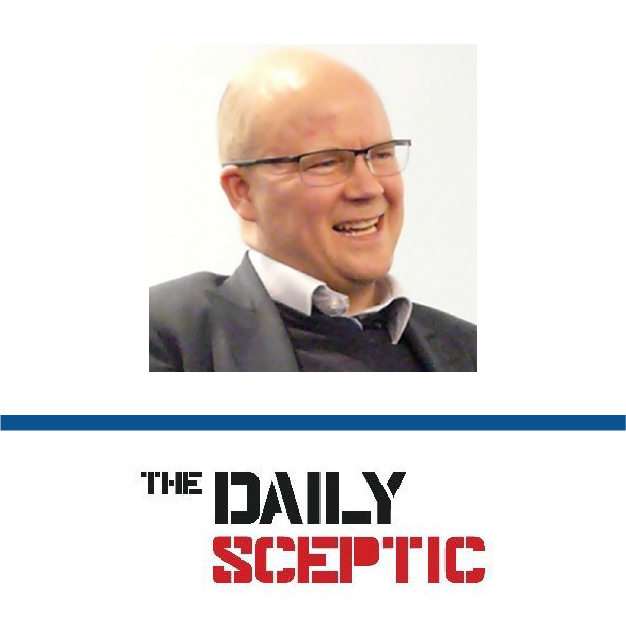 CLAIM
“Natural variation explains a substantial part of global warming observed since 1850;” no statistical evidence that global warming is intensifying natural disasters, or making them more frequent.
VERDICT more about the rating framework

DETAILS
Incorrect Natural (non-human) drivers of climate change have been mostly stable since the onset of modern warming and all the available scientific evidence implicates human greenhouse gas emissions as the primary culprit. Scientific evidence also indicates that climate change is contributing to intensified or more frequent natural disasters such as heatwaves, drought and heavy rainfall.
KEY TAKE AWAY

Scientific evidence shows that climate change is driven by human activities, as recognized by the world’s authoritative scientific bodies such as the U.N.’s Intergovernmental Panel on Climate Change, the U.S. National Academy of Sciences and the U.K. Royal Society. These scientific bodies, composed of experts in the field of climate science, have concluded that climate change is predominantly driven by human emissions of greenhouse gases. The “World Climate Declaration” group, largely composed of non-experts, relies on several inaccurate claims about the science to arrive at an alternative conclusion.

CLAIM: “The political fiction that humans cause most or all climate change and the claim that the science behind this notion is ‘settled’, has been dealt a savage blow by the publication of a ‘World Climate Declaration (WCD)’ signed by over 1,100 scientists and professionals.” “Natural variation explains a substantial part of global warming observed since 1850;” “There is no statistical evidence that global warming is intensifying hurricanes, floods, droughts and such-like natural disasters, or making them more frequent.”

An article authored by Toby Young in the Daily Sceptic, a website with a history of publishing scientifically unfounded claims, reports on an open letter signed by “1,200 scientists and professionals.” The letter, entitled the “World Climate Declaration,” is claimed to have “dealt a savage blow” to the notion that human emissions of greenhouse gases are responsible for climate change. The World Climate Declaration group, which has links to fossil fuel interests, has made similar allegations in the past, which were previously analyzed by scientists and found to be inaccurate.

Young and the letter argue that, rather than greenhouse gas emissions, today’s warming may be a natural event following the end of the Little Ice Age, an interval of particularly cold conditions between around 1400 to 1700.[1] Young quotes Antonio Zichichi, a physicist with ties to the Heartland Institute think tank who does not have a background in climate science: “Natural variation explains a substantial part of global warming observed since 1850…the Earth’s climate has varied for as long as the planet has existed, with natural cold and warm periods.”

While natural variations can impact climate, invoking the existence of such natural variability (i.e., non-human factors such as solar variability and volcanic activity) to explain contemporary warming is scientifically unsound. Examining all plausible climate drivers reveals that natural variability has exerted a relatively minor influence on total climate change since the industrial era (Fig. 1). By contrast, human emissions of CO2 and other greenhouse gases are the dominant factors that have driven warming over this interval.[2,3] 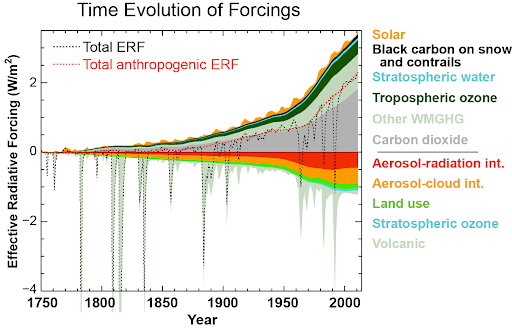 Figure 1. Time series of effective radiative forcing (warming) caused by various mechanisms. Note that carbon dioxide (gray) contributes more to warming than all of the other well-mixed greenhouse gases (WMGHG). Note also that the majority of warming is caused by carbon dioxide and other greenhouse gases. Source: U.S. Fourth National Climate Assessment.

“The warming from the late 1800s to the present is all due to human-caused climate change, because natural factors have changed little since then and even would have caused a slight cooling over the last 70 years rather than the warming we have observed”, said Timothy Osborn, a climate scientist at the University of East Anglia, in a previous review of a similar claim. “Climate scientists study the causes of warming and cooling periods and calculate their effects on our climate. These studies show that natural warming after the Little Ice Age was complete by the late 1800s,” added Osborn.

Scientists estimate the effects of various potential climate drivers by running model simulations, mathematical representations of the climate system. The effectiveness of climate models is evaluated by their ability to capture real-world climate trends. Models used by the IPCC have been faithfully predicting climate since the 1970s, which gives researchers confidence in their performance.[4] Modeling results consistently indicate that the observed increases in surface temperature and ocean heat content are not possible to explain with natural variability alone and rather demonstrate that human activities are responsible for the warming trend (Fig. 2). 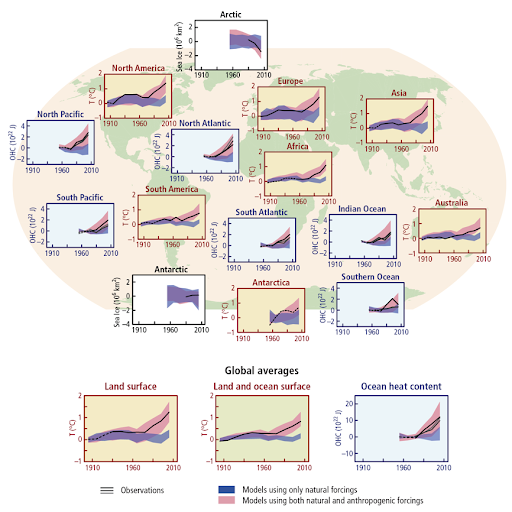 Young’s article later repeats another claim about the merits of CO2 with a quote from the letter, calling the greenhouse gas “beneficial for nature” and responsible for “greening the Earth.” This narrative was explored in a recent Climate Feedback insight article, in which scientists like Sara Vicca, a carbon-cycle expert at the University of Antwerp, were featured. While it is true that plants need CO2, this does not indicate that warming driven by greenhouse gas emissions is harmless.

“The benefit[s] of increasing CO2 concentrations for plant growth are increasingly being outweighed by the negative impacts, especially of global warming,” said Vicca. For example, extreme events associated with CO2-driven warming, such as drought, can adversely impact plant life.[5]

The letter also contests a relationship between climate change and extreme events, claiming that “there is no statistical evidence that global warming is intensifying hurricanes, floods, droughts and such-like natural disasters, or making them more frequent.” Such a claim is at odds with the most recent IPCC report,[2] which states in its summary for policymakers that “human-induced climate change is already affecting many weather and climate extremes in every region across the globe.” The IPCC further notes that “evidence of observed changes in extremes such as heatwaves, heavy precipitation, droughts, and tropical cyclones, and, in particular, their attribution to human influence, has strengthened since AR5 [Assessment Report 5, a previous IPCC report].” Moreover, the IPCC states with high confidence that “increases in frequency, intensity and severity of droughts, floods and heatwaves, and continued sea level rise will increase risks to food security in vulnerable regions from moderate to high between 1.5°C and 2°C global warming level [the maximum level of warming that the Paris Agreement calls for], with no or low levels of adaptation” (Fig. 3). 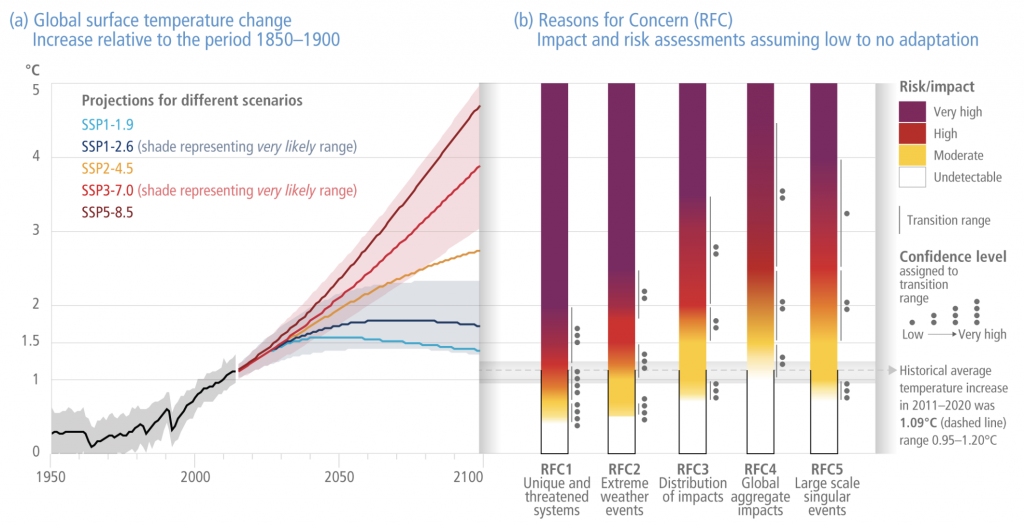 Given the volume of inaccurate claims made in the letter and Young’s article, it is perhaps surprising that “1,200 scientists and professionals” agree with its content. It is, however, instructive to examine the credentials of the signatories. Of the 1,200, only a handful mention having a background in climate science. Some of these individuals claim that they have a master’s degree in the subject matter while others identify as “independent researchers” without mentioning specific credentials. Many signatories have degrees in unrelated fields (i.e., psychology) or work in the fossil fuel industry. Such findings are similar to Climate Feedback’s review of the signatories to the previous letter.