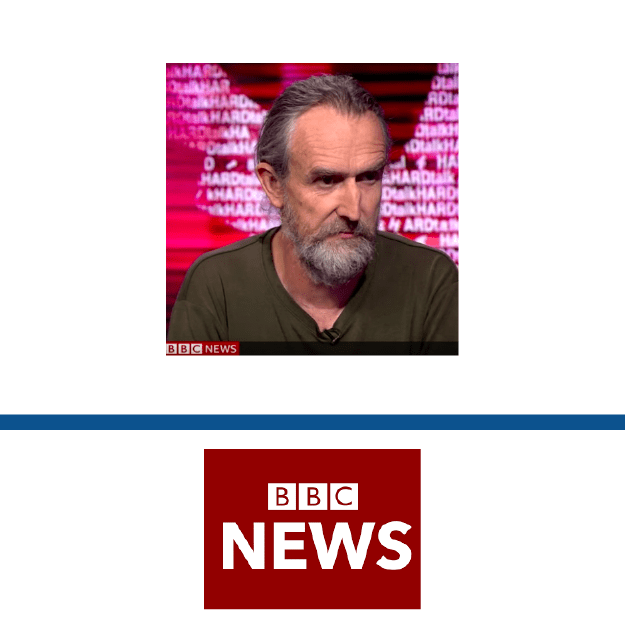 CLAIM
I am talking about the slaughter, death, and starvation of 6 billion people this century—that's what the science predicts.
VERDICT more about the rating framework

DETAILS
Inadequate Support: While Hallam claims to be presenting a prediction from the scientific literature, this claim is not supported by published research.
KEY TAKE AWAY

Research shows that continuing climate change results in a broad array of serious threats to humans and other species. However, counter to Hallam's statement, published studies have not predicted 6 billion human deaths this century and there is no credible mechanism referred to justify how this could happen.

CLAIM: I am talking about the slaughter, death, and starvation of 6 billion people this century—that's what the science predicts.

Amber Kerr, Researcher, Agricultural Sustainability Institute, University of California, Davis:
Mr. Hallam’s claim that “the science predicts” that six billion people are headed for slaughter and starvation by 2100 is simply not correct. No mainstream prediction indicates anywhere near this level of climate-change-induced human mortality, for any reason. The effects of war, disease, and weather disasters are somewhat harder to anticipate (and outside of my core expertise), so I will focus the remainder of my reply on food supply issues.

It is likely that climate change will exacerbate food insecurity in many parts of the world, especially in the developing tropics, but even under the worst-case scenarios (e.g.10-20% yield declines of staple crops, combined with gross income inequality, political instability, and continued high population growth rates), it is hard to conceive how the death toll would exceed tens of millions or, at most, the low hundreds of millions. Of course, a potential death toll of tens of millions is gravely alarming and should be treated with great moral urgency. But I do not believe it is helpful to grossly exaggerate the predictions that have been made.

It should also be noted that:

(1) Many temperate regions will likely see increased crop yields under future climate, due to warmer temperatures and the CO2 fertilization effect. Depending on the extent of global trade and cooperation, these yield increases could help to partially ameliorate decreases experienced elsewhere. Many agricultural impact projections don’t include the CO2 fertilization effect, due to uncertainty, but in reality this effect will probably help soften the blow of climate change to some extent. (For example, global wheat production may be more likely to increase than decrease; Liu et al. 2018 Global Change Biology1.)

(2) Food production and distribution is greatly dependent on policy; it is not an inexorable biophysical process. It is within our current capabilities to produce and distribute enough food for the 10 billion people who will likely be alive in 2100, if we reduce wastage, eat more plant-based foods, increase the efficiency of production, and ensure more equitable distribution. Climate disruptions will make this more challenging, but by no means impossible.

In support of point (2), Ch. 7 of the 2014 IPCC 5th Assessment Report, WGII (Impacts)2, states that:
“It is only about as likely as not that the net effect of climate and CO2 changes on global yields will be negative by 2050, but likely that such changes will occur later in the 21st century. At the same time, it is likely that socioeconomic and technological trends, including changes in institutions and policies, will remain a relatively stronger driver of food security over the next few decades than climate change.”

Patrick Brown, Assistant Professor, San Jose State University:
Hallam’s claim is of low scientific credibility. It is wild speculation, based much more on his imagination than “the science”.

Presumably, many of the 6 billion deaths that Hallam mentions are imagined to come about due to starvation, induced from climate-change-caused crop failures. Food security under climate change is a concern. However, most of the concerning projections that get attention are defined as reductions in yield (e.g. calories grown per unit area) relative to a no climate change scenario (not relative to the yield today). This is very different than a projection of a reduction in the total production of calories relative to today. In order to project total production into the future, technological and economic factors would also need to be taken into consideration.

For example, over the historical period of global warming, technological advancements have increased yields by 100-200% in spite of any negative impact of climate change. Even if this yield trend were to reverse, the total production of calories might not be affected if economic forces cause more land to be used for agriculture. In other words, if yields were to be reduced by 10% that does not translate directly into 10% less food available. It is likely that the reduction in yield would stimulate increased land use for agriculture. In this example, if 10% more land were used for agriculture, total production would remain unaffected.

All these factors would need to be reckoned with before one could make any credible projection of reduced food production in the future, much less a projection as outlandish as “…starvation of 6 billion people”.

What science projects under plausible scenarios of human courses of action is varying degrees of further disruption of fundamental planetary life support systems (e.g. water, agriculture, ecosystems) needed to support the nearly 8 billion humans currently living on Earth. This disruption poses some degree of existential risk to civilization as we know it—with the amount of risk likely still depending on how rapidly we reduce radiative and ecological forcings—but these degrees of risk are not quantified with any certainty. Ice models have had difficulty projecting the melting rate of the Greenland ice sheet; predicting the mechanism of the collapse of civilization and the number of lives lost as a result is a far more complex problem, and there is no scientific consensus that six billion lives will be lost. On the other hand, models have tended to underestimate ice sheet melting, and model projections in general have been systematically “conservative.” I unfortunately don’t see how the possibility of six billion deaths can be ruled out with confidence, especially when the intrinsically unpredictable but real possibility of climate-related war (which could include nuclear weapons) is considered. In other words, Hallam’s claim is speculative, but given the depth and rapidity of anthropogenic change, so is confidently ruling it out.

While I don’t agree that “science predicts” the death of six billion people, in my opinion Hallam’s broader warning has qualitative merit and in the context of a lay translation of risk his use of “six billion” might reasonably be interpreted as figurative, an illustration of a worst-case scenario (again, that I don’t think can be ruled out). Whether to interpret this claim literally or figuratively is a question perhaps best left to humanists. Given this ambiguity I judge it “unrateable.”

I know of no climate model simulation or analysis in the quality peer-reviewed literature that provides any indication that there is a substantially non-zero probability of “starvation of 6 billion people this century” as a result of climate change.

Climate damage has been discussed extensively in various IPCC reports and in the peer-reviewed academic literature. Estimates of climate change damage for this century, in business-as-usual scenarios, are typically in the range of a few percent of global GDP to tens-of-percent of GDP for the most extreme damage functions in the most extreme scenarios. There is no analysis of likely climate damage that has been published in the quality peer-reviewed literature that would indicate that there is any substantial likelihood that climate change could cause the starvation of 6 billion people by the end of this century.