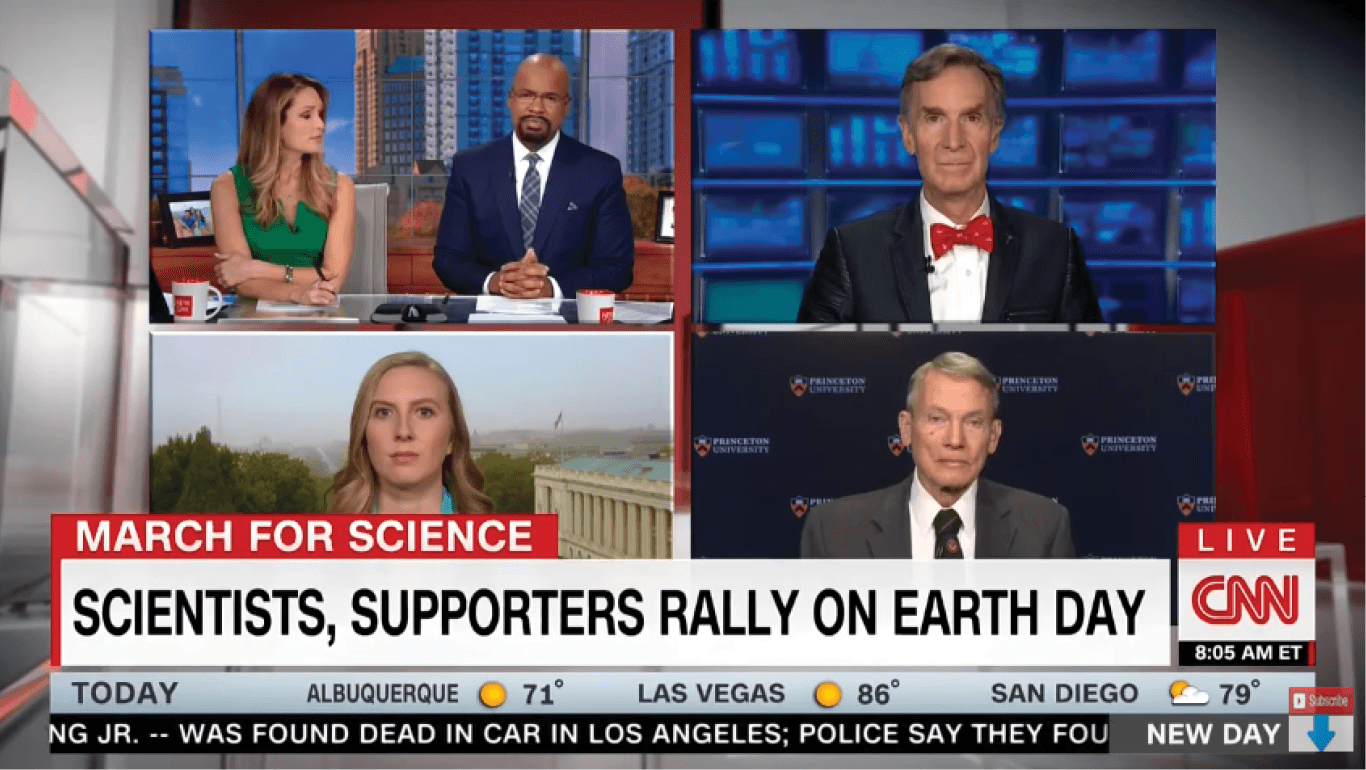 The April 22 edition of CNN’s “New Day Saturday” featured a guest panel discussing the science marches that gathered many thousands in hundreds of cities around the world.
Few scientific points were discussed regarding climate change, and CNN relied on Bill Nye and William Happer to comment on the science—neither of whom have a scientific background in climate change. We asked scientists to check the credibility of two key scientific claims made during the interview by William Happer.

The first one argues that CO2 is not a pollutant because it is causing “greening”, or increased plant growth. Even though CO2 does indeed allow plants to grow faster (as Alexis Berg and Jean-Francois Exbrayat explain below), this fact is often used in a misleading way in the climate change conversation to give the impression that CO2 is harmless, ignoring the many ways in which CO2 can cause harm to the environment—like causing climate change. Sara Vicca explains, “[C]limatic changes (and particularly extreme events) are an important threat to ecosystems and to the land carbon sink.”
[see the full comments on this quote below]

The second claim Happer makes is that the observed warming is less than projected by climate models. Scientists explain why this is incorrect (or, at best, misleading). As Zeke Hausfather notes, “At the surface (where we all live) models predict a rate of warming of 0.2 °C per decade since 1970, while NASA observes warming of around 0.18 °C during the same period.”

Happer’s claim may be based on the fact that over a short period of time (between about 1998 and 2013), surface warming was slower than the long-term trend. However, scientists emphasized that such short-term fluctuations are expected due to natural climate variability and do not contradict the existence of the underlying long-term warming due to CO2.
[see the full comments on this quote below]

CNN has aired misleading and incorrect information left uncorrected. If CNN wants to inform their viewers about the science of climate change, it is easy to find scientists who have expertise on the topic.

“there’s this myth that’s developed around carbon dioxide that it’s a pollutant […] Carbon dioxide is a perfectly natural gas, it’s just like water vapor, it’s something that plants love. They grow better with more carbon dioxide, and you can see the greening of the Earth already from the additional carbon dioxide in the atmosphere.” -William Happer

Sara Vicca, Postdoctoral research fellow, University of Antwerp:
That claim is correct, and it is generally assumed the elevated CO2 concentrations have contributed considerably to the land carbon sink (ca. 30% of our CO2 emissions have been absorbed by land ecosystems). The claim may still be misleading, though. Plants don’t only need CO2 and water, but also nutrients like nitrogen and phosphorus. If the latter are not sufficiently available, plants may not respond to elevated CO2 at all. Moreover, climatic changes (and particularly extreme events) are an important threat to ecosystems and to the land carbon sink. It is expected that nutrient limitations and extreme events will reduce the land carbon sink and may eventually turn the land into a source of CO2.

I didn’t mention soil (for simplicity), but that’s an important part of the land carbon sink, too.

Alexis Berg, Research Associate, Harvard University:
Yes, we are seeing an increase in vegetation around the world, with satellites showing up to 50% of the land surface greening over the last 30 years, most of it being indeed attributed to increased atmospheric CO2*. This is not a surprise. This vegetation increase is consistent with the fact that we know that about a quarter of our CO2 emissions is being taken up by the land biosphere (another quarter going into the oceans, and the remainder staying in the atmosphere). This greening is taken into account in climate models. The real question is how long this greening is going to go on (there are already indications that it is slowing down), as we expect that as climate warms further, adverse impacts on ecosystems may start to offset the positive impact of increased atmospheric CO2—particularly in places where regional climate is moving away from the “comfort zone” of current ecosystems.

Jean-François Exbrayat, Post-doctoral Research Fellow, The University of Edinburgh:
Carbon dioxide is a gas that is naturally present in the atmosphere. Plants grow by taking up CO2 from the atmosphere through the process of photosynthesis. Terrestrial ecosystems have taken up about 20-30% of fossil-fuel emissions since the 1960s[1]. Through this so-called “CO2-fertilization”, plants help reduce the growth of atmospheric CO2 responsible for climate change, and this might be what William Happer refers to when talking about greening.

A global “greening”, (i.e., longer growing seasons) of the Earth has also been detected in satellite observations of leaf area index from the 1980s to the present day, and modelling experiments have attributed 70% of this greening to CO2 fertilization[2].

However, plants grow better with more CO2 only if they also have access to nutrients like nitrogen and phosphorus to fix the photosynthesised carbon. For example, results from Free-Air CO2 Enrichment (FACE) experiments[3] have shown that the initial enhancement of plant productivity under CO2-fertilization was declining through time. This enhancement could, however, be restored and maintained through an additional nitrogen treatment. Results from another FACE experiment in Australia[4] have recently shown that, under current phosphorus limitations, no additional growth was recorded under increased CO2.

These results from FACE experiments raise uncertainty on the sustainability of the CO2-fertilization effect in mostly nitrogen-limited temperate and boreal forests and mostly phosphorus-limited tropical ecosystems. Accordingly, adding nitrogen and phosphorus limitations on plant growth in Earth system models reduces the projected capacity of the land surface to continue offsetting fossil-fuel emissions during the 21st century[5].

Pierre Friedlingstein, Professor, University of Exeter:
This is the usual misleading argument that if CO2 is good for plants, it cannot be bad for the climate.
Happer’s statement is correct—CO2 is needed for plant growth (along with water, nutrients, and energy from the sun)—but it does not change the fact that CO2 is a greenhouse gas. It increases the radiative forcing of the planet and leads to warming, as observed over the last century.

What he says is like saying, “Sun cannot cause skin cancer. The sun is natural, it’s something plant love, they grow better with more sunshine!”

“The temperature is not rising nearly as fast as the alarmist computer models predicted. You know, it’s much, much less, factors of 2 or 3 less. So the whole basis for the alarmism is not true, it’s based on flawed computer modeling.” -William Happer

Zeke Hausfather, Director of Climate and Energy, The Breakthrough Institute:
Dr. Happer’s assertion that models show 2x to 3x greater warming than observations is incorrect. At the surface (where we all live) models predict a rate of warming of 0.2 °C per decade since 1970, while NASA observes warming of around 0.18 °C during the same period. During this period models have been running about 10% too hot, hardly 200% to 300%. Similarly, the observations from all the different groups that measure global surface temperatures are well within the envelope of model projections:

Mat Collins, Professor, University of Exeter:
Looking over the last 50 years, for example, the models and the observations are consistent in terms of the rates of global temperature warming that we expect from human activities. Over shorter decadal periods, there are natural fluctuations in climate in the real world that are much harder to predict.

It is true that models do not provide perfect simulations of the real world climate. However, we have considerable confidence in long-term trends at the global scale. For shorter time scales and for regional scales, we still have some work to do.

Pierre Friedlingstein, Professor, University of Exeter:
Climate models are doing an excellent job reproducing the warming of the 20th century. They simulate a warming consistent with the observations and they can actually attribute the warming trend over the century to the observed increase in CO2, other greenhouse gases, and aerosols. What they have a harder time simulating in phase with observations is the natural variability—in particular the relative pause in warming that occurred in the last decade (1998-2013 or so). But again, this has very little to do with CO2 and climate change; this is mainly about decadal variability in the global ocean circulation.