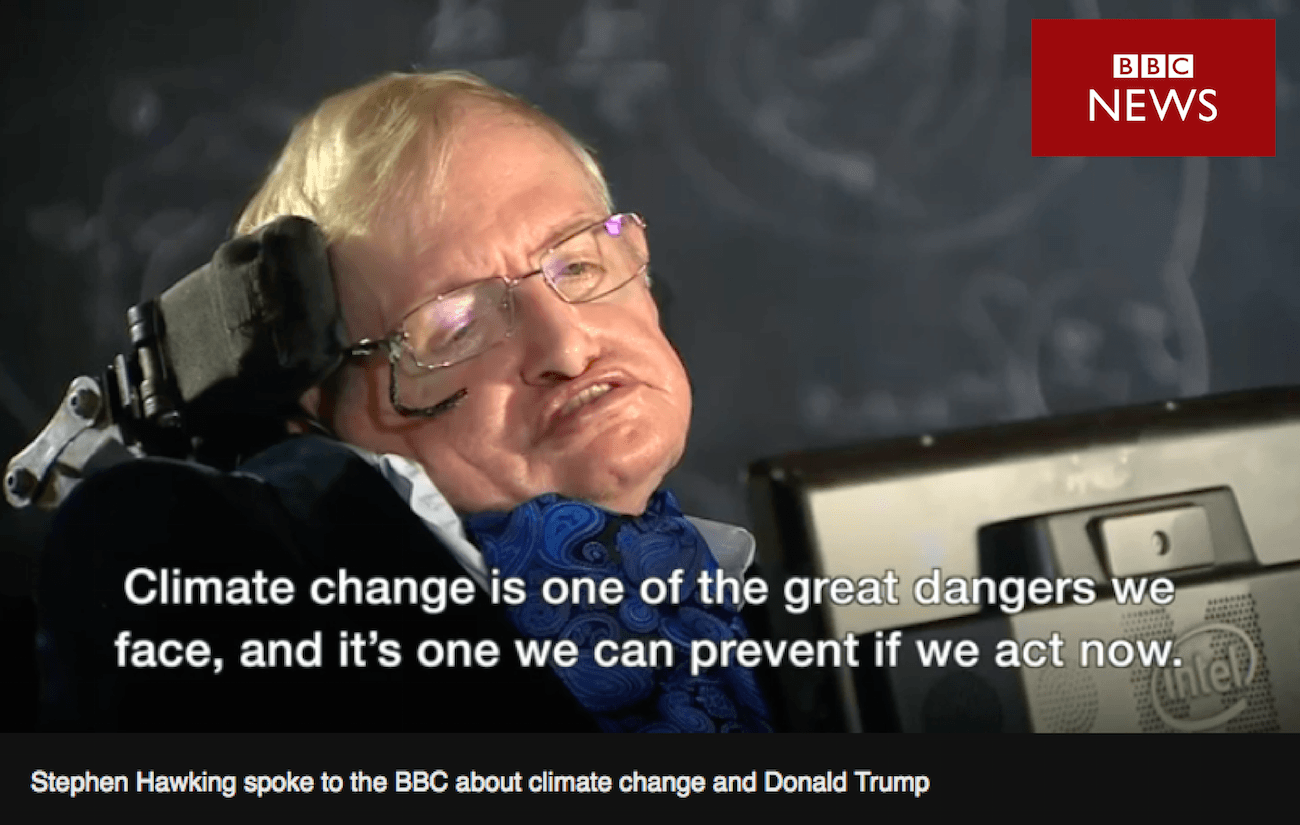 On July 2nd, BBC News ran an interview with the well known theoretical physicist Stephen Hawking that touched on climate change. As we have discussed previously, such interviews can sometimes run the risk of spreading misinformation if the interviewee’s comments are presented without correction or context.

We asked scientists to review two of Hawking’s statements from the interview to assess their accuracy. The first was:

“We are close to the tipping point where global warming becomes irreversible. Trump’s action could push the Earth over the brink, to become like Venus, with a temperature of two hundred and fifty degrees, and raining sulphuric acid.”

The scientists who reviewed this statement explained why it is actually incorrect. The Earth is not at risk of “runaway” warming that could match the extreme state of Venus.

NASA GISS Postdoctoral Research Fellow Christopher Colose said that this is due, in part, to the state of Earth’s water. “Liquid water is not stable at the surface of Venus today, which is over 850 °F. An ancient vaporized ocean on Venus (for which there is some isotopic evidence for) would eventually be lost to space by the breakup of high altitude water by intense wavelengths of sunlight; this sustained water loss does not occur on Earth due to very cold temperatures in the upper troposphere, which keeps most of the vapor near the surface[…] Luckily, Earth does not absorb enough Sunlight for this runaway scenario to be a credible threat. Adding CO2 to the atmosphere would never bring Earth near the critical point of water or lock Earth into a state where it can’t lose enough energy to cool off.”

Or as Texas A&M University Professor Andrew Dessler put it, “Best guess warming of the 21st century is a few degrees C. Make no mistake, this could be terrible for humans and ecosystems, but it’s a lot less than suggested [by Hawking].” [Read the reviewers’ full comments here.]

The BBC News article does at least highlight the judgment of the most recent IPCC report that the amount of warming required to cross significant “tipping points” towards additional warming is uncertain.

The second statement by Hawking related to his opinion on the Trump Administration’s decision to announce withdrawal from the Paris Agreement:

“Climate change is one of the great dangers we face, and it’s one we can prevent if we act now. By denying the evidence for climate change, and pulling out of the Paris Climate Agreement, Donald Trump will cause avoidable environmental damage to our beautiful planet, endangering the natural world, for us and our children.”

It is generally correct to say that any effort that slows the reduction of greenhouse gas emissions has consequences for climate change. Of course, the exact impact of the Trump Administration’s decision on global emissions will depend on additional factors like market forces in the US and the way other nations respond.

While Hawking’s comparison with Venus is misleading, the interview also includes comments about the impacts of inaction on climate change that are well supported by science. But Hawking undermines his argument by mixing in inaccurate hyperbole to support his point.

The reviewers’ full comments on the second statement are provided below.

Ken Caldeira, Senior Scientist, Carnegie Institution for Science:
Climate change is one of the great dangers we face, and it is a danger we can largely prevent if we act now. There is a little bit of climate change in the pipeline even if we zeroed out greenhouse gas emissions today, but the vast majority of climate change anticipated for this century is expected to come from emissions that have not yet occurred from infrastructure that is yet to be built.

Andrew Dessler, Professor, Texas A&M University:
This is vague enough that it’s hard to evaluate; also, it’s mainly a policy statement. That said, I agree that we have the ability to head off a lot of the warming predicted for the 21st century and beyond. And I also agree that pulling out of the Paris Climate Agreement will not help the world handle the threat of climate change in the most rational way.

Christopher Colose, Research Scientist, SciSpace LLC, NASA Goddard Institute for Space Studies:
Indeed, climate change is one of the great dangers humanity faces, and has aptly been called “humanity’s final exam.” However, despite the absurd reasons for leaving the Paris agreement, this decision does not lock the climate into an alternative path, and the U.S. would be welcomed back into the agreement during the next presidency.

The Paris commitments, if met, as well as continued commitments to carbon reductions in future decades, do have tremendous impacts on the future trajectory of climate warming. Indeed, zeroing out carbon emissions today effectively eliminates future committed warming, while unabated emissions ensure warming that is unparalleled going back tens of millions of years.

Fortunately, the rest of the world has shown signs that it is willing to move ahead, and long-term investments in energy infrastructure in the U.S. should not be strongly affected by Trump’s decision, leaving only Trump behind. It is still up to the world to decide how much future carbon we emit. Today’s excess CO2 will affect climate for tens of thousands of years, while Trump’s presidency will only last 4-8 years. Those 4 years alone do not amount to much on their own; however, every gigaton of carbon we stop from being emitted in the future will cut down on peak warming.