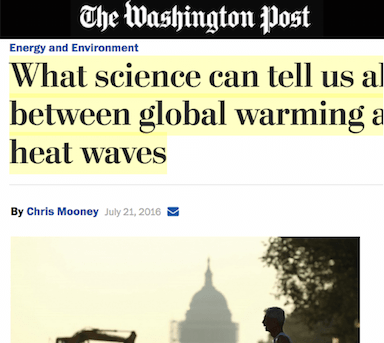 Because of human-caused global warming, heat waves in the U.S. are becoming more common and the hottest heat waves are getting hotter. Weather is naturally variable, but the trend of warming temperatures means that local record highs are set more often, and record lows less often.

Andrew King, Research fellow, University of Melbourne:
This is true and is also consistent with findings from other areas of the world. For example, Dr Sophie Lewis led work* that showed in Australia there have been 12 times as many hot records compared to cold records since 2000.

Rasmus Benestad, Senior scientist, The Norwegian Meteorological institute:
“Climate change” is by definition a shift in the weather statistics, such as the curve that describes the likelihood of temperatures exceeding a certain threshold [see figure below]. The temperature has a statistical character that is close to being bell-shaped (normal distribution), which implies that high temperatures are expected to be more frequent with a global warming – unless the typical range of temperatures (standard deviation) or shape of the curve changes as well. Climate is the typical character outlined by this curve (probability density function) describing the probabilities, whereas weather is each different data point on which this curve is based. When referring to one event – one data point – one talks about weather. Weather is not the same as climate, but they are related: climate is the expected weather. 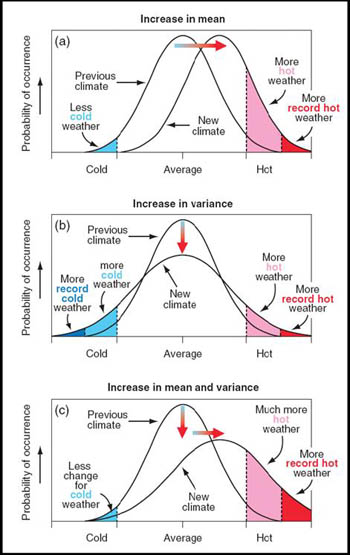 Sarah Perkins-Kirkpatrick, Research Scientist, Climate Change Research Centre, The University of New South Wales:
This is certainly true—the distribution of temperature is shifting towards warmer conditions. This allows for a large increase in the frequency of heatwaves, as well as an increase in their intensity. But the amount of change depends largely on the area of focus. Some regions have a much wider temperature distribution than others. Changes in the variability of the temperature distribution will also influence by how much extreme events like heatwaves will change.

Almost all attribution studies on extreme heat conditions have come back with some measurable human influence. The amount of this influence varies a lot, and therefore, is specific to the event analysed. But in general, yes, there is a detectable human influence behind extreme hot temperature events.