Global sea level rise is caused primarily by two processes: (1) the expansion of seawater as its temperature increases and (2) the melting of glacial ice on land. It is well known that the melting of floating ice does not play a role. 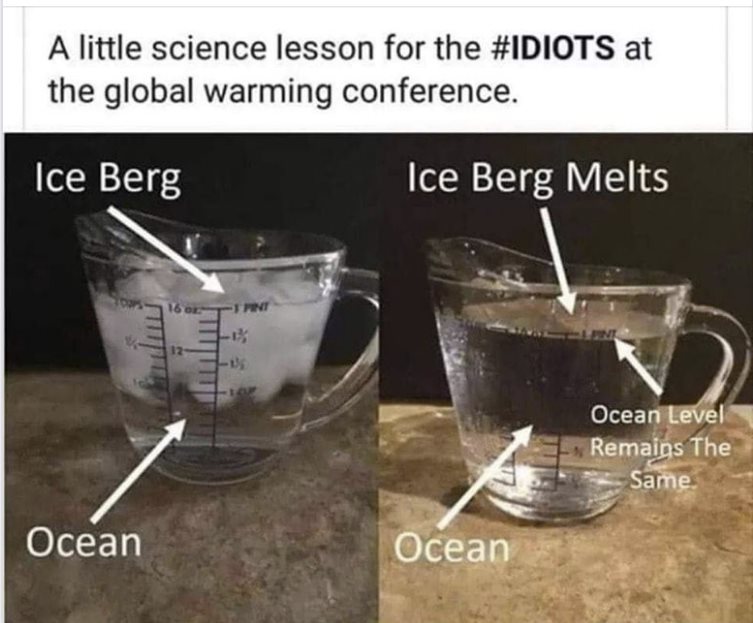 This meme, which has spread widely on Facebook, implies that the science of human-caused global sea level rise is based on the faulty assumption that floating ice raises sea level as it melts. However, a critical step is missing in this set of “before-and-after” photos: the water level before the ice cubes were placed in the measuring cup.

The ice on planet Earth—part of what is termed the “cryosphere“—includes sea ice as well as glacial land ice. Sea ice is frozen seawater floating at the surface, not unlike the ice that covers a lake or river in colder winter climates. As such, the freezing and melting of sea ice does not have a significant effect on sea level, though the loss of polar sea ice does have profound impacts on local ecosystems and the Earth’s climate system.

But on land, glaciers high in mountains around the world or making up part of the great ice sheets of Greenland and Antarctica, do raise sea level when they melt and flow into the ocean. Some glaciers end on land, with meltwater flowing down rivers to reach the ocean. Other glaciers slide into the ocean directly, calving off large blocks called “icebergs” that drift away as they melt.

The melting of an iceberg does not raise sea level significantly, because it is already displacing that volume as it floats. (There is, however, a small additional contribution from the dilution of salty seawater with fresh melt from the iceberg. This adds 2-3% to the volume of displaced seawater.1) But as the land-based portions of glaciers shrink, more and more icebergs and meltwater are added to the ocean, raising sea level. Greenland, for example, lost around 3,800 billion tonnes of ice between 1992 and 2018, while Antarctica lost about 2,700 billion tonnes between 1992 and 2017, together raising global sea level by about 18 millimeters over that timespan2,3.

There is also one more process that is a primary contributor to sea level rise: thermal expansion. Like other fluids, seawater expands as its temperature increases. This means that as the oceans warm, their volume expands enough to raise sea level measurably.