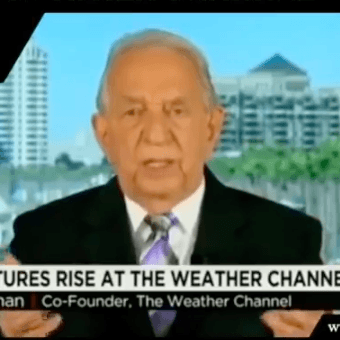 CLAIM
Climate change is not happening, there is no significant man-made global warming now, there hasn't been any in the past, and there's no reason to expect any in the future.
VERDICT more about the rating framework

DETAILS
Factually inaccurate: The warming of Earth's climate has been unequivocally documented by measurements of many types, including surface station and ocean records, multiple sources of satellite data, and effects like shrinking glaciers.
Inadequate Support: Based on multiple lines of evidence, scientists have concluded that human activities are clearly the dominant cause of climate change.
KEY TAKE AWAY

Coleman's central claim in this video—that there is no human-caused climate change—is contradicted by a wealth of evidence and decades of published, peer-reviewed, scientific research. There is no evidence to support his claim.

CLAIM: There's no question about it. Climate change is not happening, there is no significant man-made global warming now, there hasn't been any in the past, and there's no reason to expect any in the future.

Stephen Po-Chedley, Research Scientist, Lawrence Livermore National Laboratory:
[This comment is taken from an earlier review of a similar claim.]
This claim is not accurate. Global temperature datasets, developed by a number of independent research groups, show robust warming in the troposphere and at the Earth’s surface. The radiative effect of carbon dioxide has also been observed[1]. Considering multiple lines of evidence, the IPCC concluded that it is “extremely likely that human influence has been the dominant cause of the observed warming since the mid-20th century.” More recent analysis of satellite data shows that tropospheric warming from the satellite record is pronounced and cannot be explained by natural climate variability alone[2].

Baird Langenbrunner, Associate Editor, Nature Climate Change:
[This comment is taken from an earlier review of a similar claim.]
If we’re assuming [Coleman is] talking about Earth since the industrial revolution, when humans started ramping up fossil fuel burning, then he’s quite wrong. There has been very clear and measurable warming since this time period—this has been confirmed time and time again using station data and satellite measurements and it matches well with predictions based on increases in greenhouse gas concentrations. Even in the brief periods when the surface temperature warms less quickly, the oceans continue to warm, which together with the atmosphere accounts for all the extra heat predicted by increased greenhouse gas concentrations.

Shaun Lovejoy, Professor, McGill University:
[This comment is taken from an earlier review of a similar claim.]

Let’s say you are given only three pieces of information:
a) The annual average value of the global temperature from 1880 to 1909
b) The atmospheric CO2 concentration for each year
c) The effective climate sensitivity