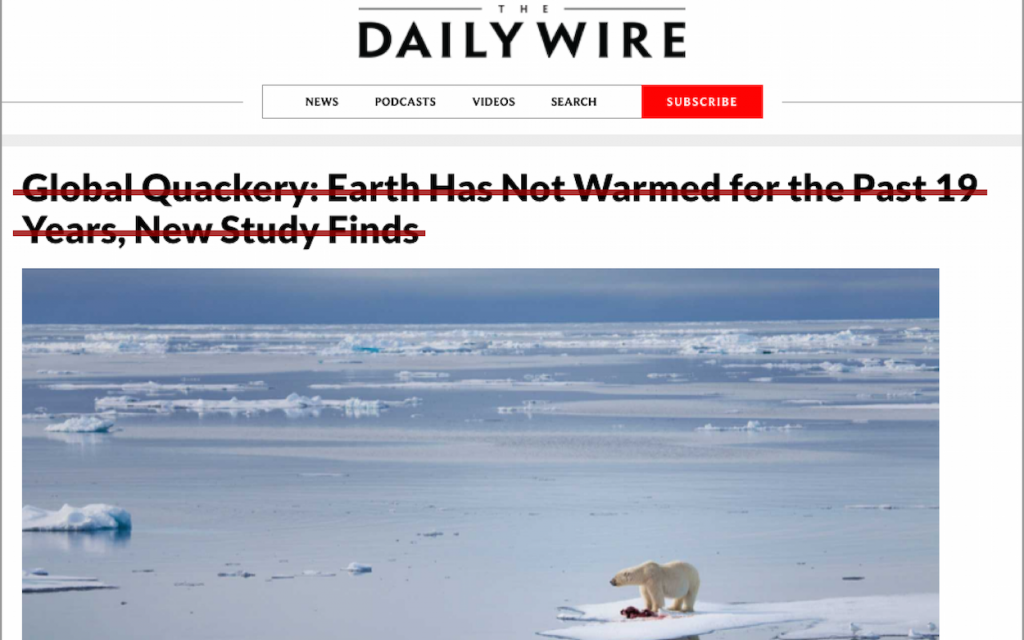 The Daily Wire edited its recent article on climate change after scientists reviewed it and Climate Feedback provided feedback to the editor. The author has removed two paragraphs and changed the title, but the new version of the article does not contain any mention of the fact that the article has been updated.

While the title initially read:
Earth Has Not Warmed for the Past 19 Years

It has been changed to:
Report: Earth Has Not Warmed for the Past 19 Years

Notably, the revised article withdraws the direct attribution of the false claim that the Earth has not warmed over the past 19 years to the Denmark Meteorological Institute (DMI). As DMI scientists Ruth Mottram, Martin Stendel, and Peter Langen explained, “The Daily Telegraph and the Daily Wire stories are misleading or simply wrong based on our data.”

It also withdraws the final paragraph of the article, that read:

This is the second time that the Daily Wire has updated an article after a Climate Feedback review. An article titled “Scientists: Here’s What Really Causes Climate Change (And It Has Nothing To Do With Human Beings)” was also edited following our analysis, but those changes, too, still left the article misleading, scientists concluded.
This Daily Wire article, which has been viewed over 150,000 times on the site, has left many more people misinformed as it has been picked up by other sites across the web and was shared on Facebook more than 70,000 times before the changes. The Daily Wire is unlikely to contact all these people to notify them that they have been misinformed. Maybe Facebook should?