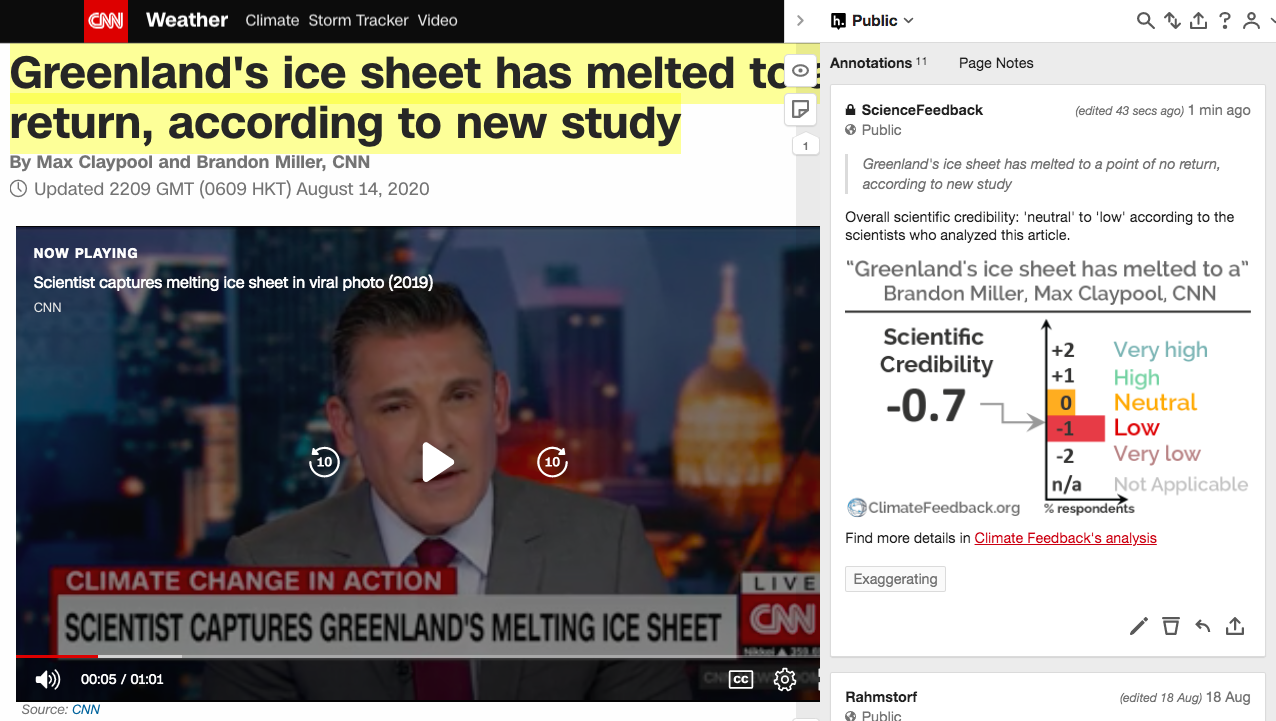 Specifically, the observational study examines rates of ice discharge (losses from icebergs and melting on the coast) from the Greenland Ice Sheet on a decadal scale over the past 34 years[1]. Between 1985 and 2018, there was a net loss of 4,200 Gt of mass from the Greenland Ice Sheet, in part due to ice discharge. The average rate of ice discharge from 2007 – 2018 was 14% greater than the average rate from 1985-1999 (see figure below).

The study authors also calculated the retreat of glacier fronts across all regions of the Greenland Ice Sheet, as quantified by front position and ice thickness (see figure below). 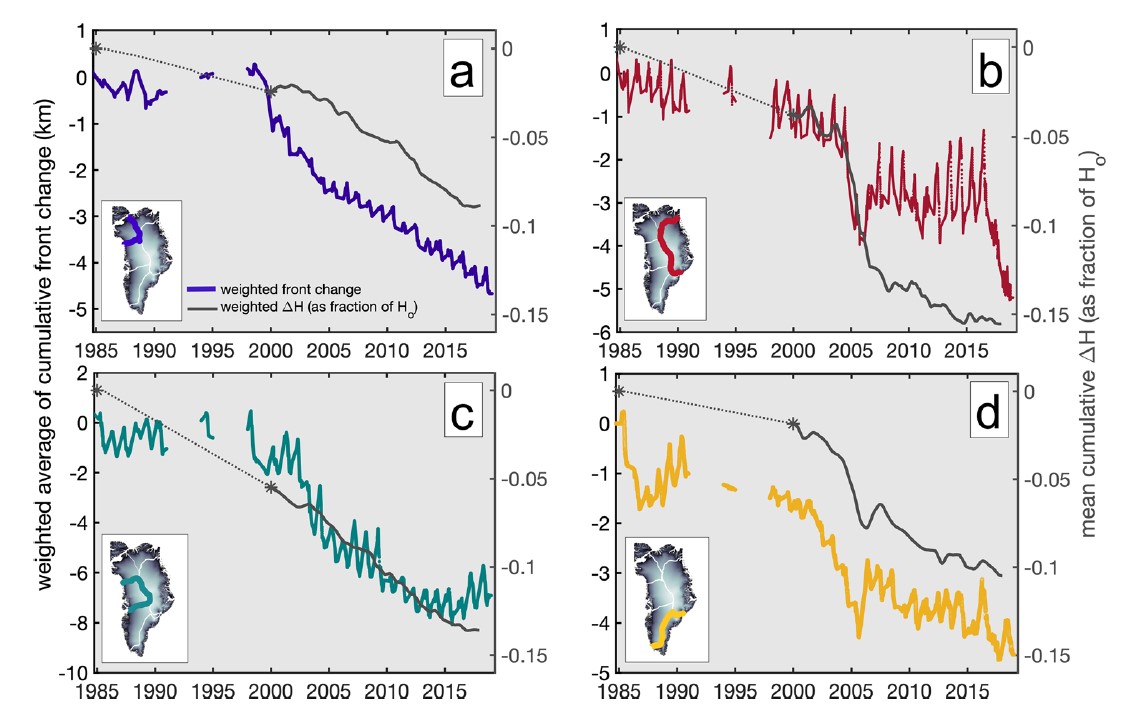 As described by the reviewers below, the CNN article also overlooks the role of human-caused greenhouse gas emissions in altering the future rate of ice loss from the Greenland Ice Sheet as well the consequences for global sea level rise. For example, one study found that under a low-emissions scenario (RCP 2.6) the Greenland Ice Sheet will lose 8-25% of its present-day mass over the long-term, compared to a loss of 72-100% under a high-emissions scenario(RCP 8.5)[2].

Stefan Rahmstorf, Professor, Potsdam University:
While most of this article is correct, I have to give it a low credibility rating because the attention-grabbing headline conclusion is not supported by the study the article is about: “Greenland’s ice sheet has melted to a point of no return, and efforts to slow global warming will not stop it from disintegrating.”

What the paper actually finds is well described in its press release: “Even if humans were somehow miraculously able to stop climate change in its tracks […] the ice sheet would continue to shrink for some time.”[1]

The key phrase here is “for some time”. Based on the study, I conclude that the time scale meant here is decades, maybe a century. However, complete loss of the ice sheet would take about a millennium even with unmitigated warming, and the process which decides over the complete ice loss is surface melt—not the ice discharge by glaciers flowing into the ocean at the margins of the ice sheet, which the study is about. When the ice sheet shrinks, it will withdraw further and further from the coast and ice discharge into the ocean will become less important. This is shown by model simulations that continue all the way until complete ice loss.

The study reported on here is an observational study looking at ice flow changes in the past decades, not a model projection for future ice loss. It does not provide evidence about the eventual fate of the Greenland ice sheet. The impression given by many media articles, namely that the Greenland ice sheet is already doomed to be lost completely, is not supported by the evidence in the paper. While the concern about Greenland ice loss is certainly very serious and justified, the conclusion that it is already doomed is an over-interpretation of the results of this study.

Twila Moon, Research Scientist, University of Colorado, Boulder:
The article correctly notes most measurements and facts and figures. However, it fails to provide nuance in critical areas regarding how quickly ice may be lost, whether this is a new scientific insight, and the role of human climate action in determining the future of Greenland ice loss (and associated sea level rise).

Luke Trusel, Assistant Professor, Pennsylvania State University:
Greenland ice sheet melt and its discharge of ice into the ocean has increased over the last few decades, making it one of the largest contributors to global sea level rise. This is important and concerning, and there’s a clear human fingerprint on Greenland ice sheet mass trends. The referenced study by King and coauthors represents important new observations of Greenland’s mass loss and the large increases that have recently occurred[1].

However, the CNN article’s suggestion that Greenland has passed a tipping point is not well established. For example, a paper published in Nature Climate Change in 2018 by Pattyn and coauthors found that the tipping point (that is, the point where potentially irreversible change is set in motion) would be in the neighborhood of 1.5 to 2°C warming above pre-industrial[3]. We’re close, but not quite there yet.

In my opinion, the most important point that is missing in the article is that our emissions trajectories *right now and in the next few decades* are critical for determining the rates and magnitudes of mass loss and sea level contributions from the Greenland ice sheet. Lower emissions mean a lower likelihood of reaching a tipping point, as well as lower amounts of warming in the atmosphere and ocean. Less warming means lower rates of mass loss from the Greenland ice sheet and enables greater opportunity for humans to respond to changing sea levels[3].

melted to a point of no return, and efforts to slow global warming will not stop it from disintegrating

Stefan Rahmstorf, Professor, Potsdam University:
While the Greenland ice sheet is certain to shrink further even without further warming, it is not at all clear whether it has crossed the point where it will be lost completely. The new study by King et al. has not examined this issue and does not say anything about it[1]. Neither does their press release, which states: “Even if humans were somehow miraculously able to stop climate change in its tracks […] the ice sheet would continue to shrink for some time.” It does not say “until it’s gone.”

Twila Moon, Research Scientist, University of Colorado, Boulder:
It is correct that there is no longer a reasonable scenario in which the Greenland Ice Sheet is fully stabilized or gains significant ice. However, this statement ignores the very important matter of how quickly ice is lost. An excellent recent study by Aschwanden et al. demonstrates what a dramatic difference there is in ice loss under a low emissions scenario v. a high emissions scenario[2]. The critical matter right now (which has already been understood by glaciologists for some time) is not whether or not we lose ice from Greenland but how quickly ice is lost.

Twila Moon, Research Scientist, University of Colorado, Boulder:
Yes, this is accurate. The Greenland Ice Sheet began consistently losing ice year-after-year around the turn of the 21st century and this number is close to the recent average for annual ice loss.

Twila Moon, Research Scientist, University of Colorado, Boulder:
Measuring changes in gravity is one important method used to determine how much ice is lost (or gained). There actually does not need to be a large change in ice mass for it to create a measurable change in the gravitational field. So it is a bit misleading to suggest that “measurable change in the gravitational field” is synonymous with “massive” ice loss. It is not. But it IS true that Greenland has lost a lot of ice in recent years. In fact, 2012 and 2019 both set records for ice loss within the historical record.

Stefan Rahmstorf, Professor, Potsdam University:
This is a completely valid concern. Rising seas already cause major problems and this will get ever worse during the course of this century. The question of whether the Greenland Ice Sheet is doomed to disappear completely in the end or eventually stabilizes at a smaller size concerns the very long term; it has no bearing on what happens in this century.

the ice sheet is retreating in rapid bursts, leading to a sudden and unpredictable rise in sea levels, making it difficult to prepare for the effects

Twila Moon, Research Scientist, University of Colorado, Boulder:
I do not agree with this statement. Ice sheet edge retreat is not a direct measure of ice mass loss. Even if ice edge retreat happens in bursts, we cannot determine from that measure how much total ice will be lost each year. Also, sea level rise is the result of a combination of changes that include land ice melt, ocean heat causing ocean volume to increase, and local vertical land motion. I would argue that the current spread in future projections of sea level rise is not highly influenced by Greenland glacier retreat rates.

Twila Moon, Research Scientist, University of Colorado, Boulder:
Correct. There is widespread retreat of the ice edge around all of the Greenland Ice Sheet. This is well documented.