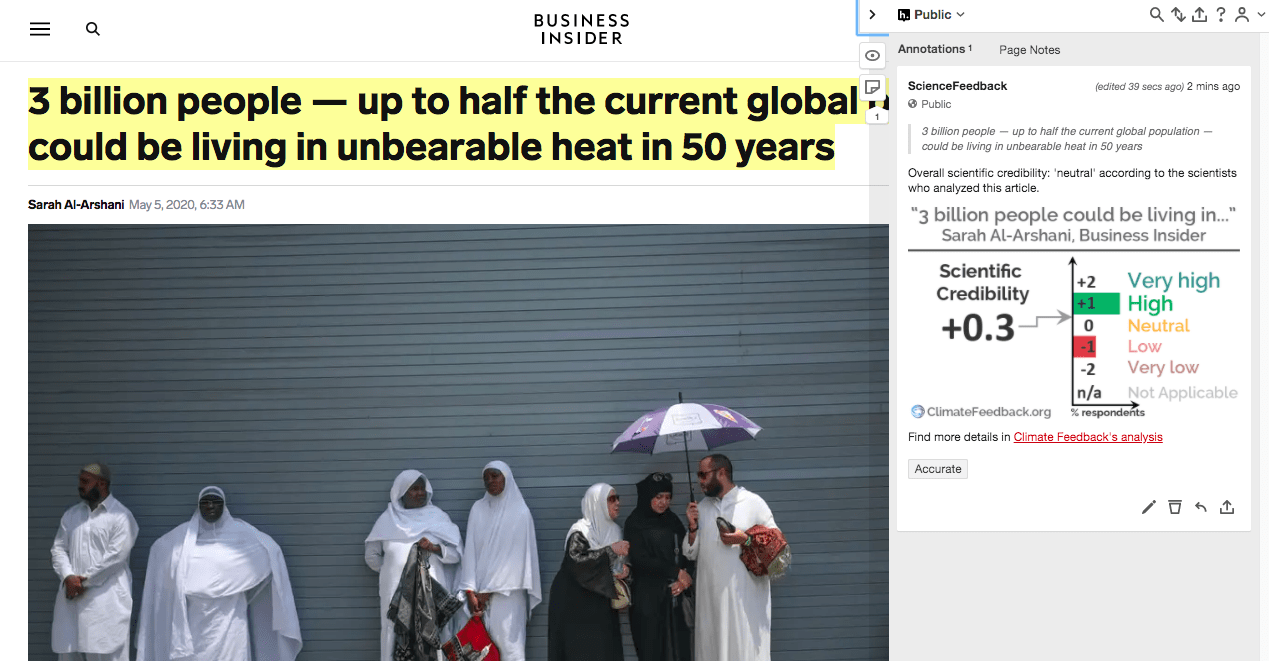 The article in Business Insider discusses findings from a study published May, 2020 that projected one to three billion people could live in much warmer climates by 2070, assuming migration is limited and greenhouse gas emissions remain high[1]. Reports on this study were also published by The Guardian and USA Today, receiving over 39,000 interactions on Facebook across the three articles over the past week. The Business Insider article accurately describes the study’s projected changes in mean annual temperatures around the globe, however, the study does not describe these increased temperatures as “unbearable” or “unlivable,” as claimed in the article. Without adequately discussing the methods and findings of the study, some reviewers state that the article exaggerates the results and misleads readers, as described below.

The study used several human population datasets to map the geographic distribution and density of humans from 6,000 years before present (BP) to today[1]. Human populations are currently concentrated in geographic regions with mean annual temperatures of ~11°C to 15°C, which has remained fairly consistent over time (see figure below). 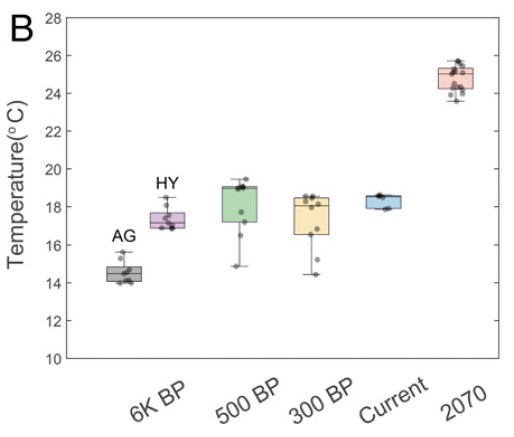 Figure—Mean annual temperature experienced by humans during different time periods ranging from 6,000 years before present (BP) to today. Humans are projected to experience much higher mean annual temperatures in 2070 (pink), relative to any other time period in the last 6000 years. HYDE (HY) and ArchaeoGlobe (AG) are datasets used to reconstruct human populations from 6000 and 5000 years BP. From Xu et al (2020)[1].

The Business Insider article accurately discusses the number of people that could be impacted by increasing mean annual temperatures, but it also states that 3 billion people could experience “unbearable” and “unlivable heat” by 2070. Because the study does not discuss whether humans can or cannot survive the projected changes in mean annual temperatures, these statements exaggerate the study results and can be misleading to readers. The value of 29°C was not chosen based on a critical threshold for human health, but to illustrate the change with a value representing some of the warmest regions people live in today. As described by the reviewers below, the article accurately discusses the key points of the study, but by focusing on the worst-case scenario and exaggerating statements about “unbearable heat” it also misleads readers.

You can read the original Business Insider article here.

Marten Scheffer, Professor, Wageningen University:
[Prof. Scheffer was an author of the study that was the topic of this article.]
It is slightly misleading to compare the future amount of people under severe climate stress to the current total population, as in the meantime the global population will have grown. It is not wrong, but it somehow suggests half the people get in severe climate trouble whereas it would be one third (for the high end forcing scenario).

Steven Sherwood, Professor, University of New South Wales:
The study does not address temperatures that are “survivable,” only those which humans evidently prefer and thrive in. We know the warmer temperatures are not unsurvivable because people have been surviving in them for millenia. Thus the story is misleading and overhyped.  It appears that the fault for this lies more with overzealous statements by some of the ecologists than the journalist who wrote the story. Nonetheless the warmer temperatures will be more difficult and undoubtedly lead to all kinds of problems, and it is valuable to have this new study highlighting that past societies in these climates have not progressed in the same way as those in cooler climates. So I applaud the study and the choice to write about it, they just needed to stay to what they’d actually shown.

Andrew King, Research fellow, University of Melbourne:
Overall, this article provides a fair representation of the study it’s based on. It accurately portrays the study’s main results in the headline, key points and throughout the text. I think the focus of the article on the worst-case scenario ahead of more likely scenarios may not be the most helpful, but this is at least explicit in the article.

Kristie Ebi, Professor, University of Washington:
As Xu et al. note[1], the analyses are statistical associations not process-based understanding of the multiple drivers of the location of human settlements over time. The authors note there are many variables they did not investigate because data were not available; this does not mean the variables are unimportant. Some of these variables are likely also to be associated with geographic location of humans, crops, and livestock. It would be interesting to hear from agricultural specialists about variables related to the geographic location of crops (such as growing degree days, day length, timing of precipitation, and others). The perspectives of anthropologists on the drivers of successful human settlements also would be interesting.

The scenario in the main text combines RCP 8.5 and SSP 3, resulting in very high greenhouse gas emissions, leading to greater climate change in 2100 than in other scenarios. The Paris Agreement committed governments to significantly reduce their GHG emissions, decreasing the probability of RCP 8.5.