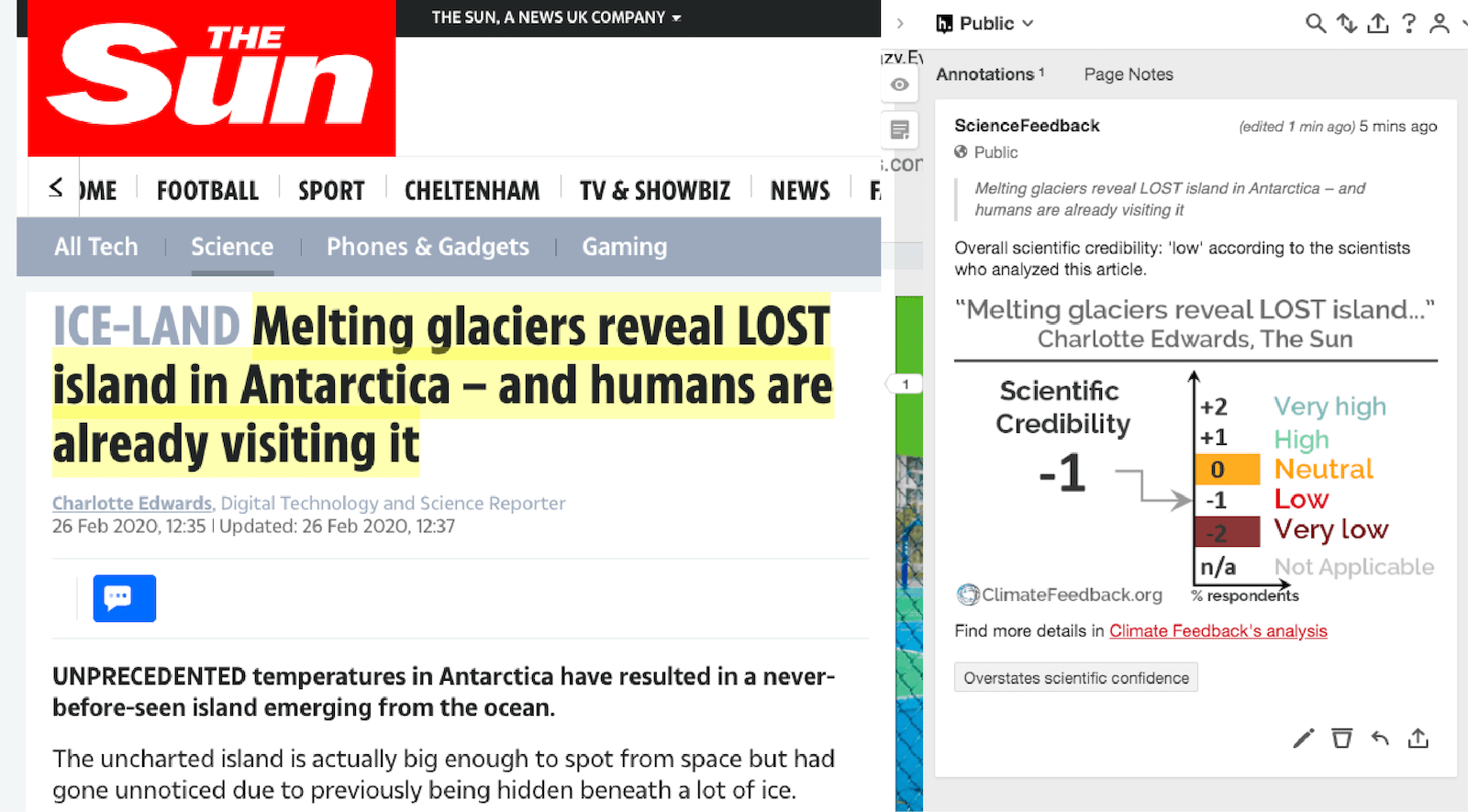 This article in The Sun describes the chance discovery of a small island in Antarctica’s Pine Island Bay, which seems to have appeared in the last decade. But the article sensationally connects this with a recent record high temperature at a station elsewhere in Antarctica. While warming trends in the atmosphere and ocean may be relevant, a single weather record is not.

It is not yet clear what is responsible for the island’s appearance. It could be that upward motion of the bedrock—relieved of weight as the ice sheet shrinks—has raised the island above sea level. It could, instead, be that that island was previously encased in the floating ice shelf in front of the glacier on land.

The map presented in the article is quite inaccurate. The inset box on the map is in the wrong location, and the satellite image is of a different location that is also wrong. Pine Island Bay—and so the newly discovered island—lies more than a thousand kilometers from either of them.

UPDATE (12 March 2020): The Sun article has been updated, removing the inaccurate map and editing the statements highlighted below. It now refers to climate trends rather than a singular weather record and qualifies statements that previously presented hypotheses as certainties.

Lauren Simkins, Assistant Professor, University of Virginia:
The article is misleading, and flawed from the title to the end. There are two discoveries here that do not belong together. First, record temperatures in the northern Antarctic Peninsula on Seymour Island were measured as a single data point and not associated with large-scale melt events of glacial ice in Antarctica. Second, the uncharted island in Pine Island Bay is 2,000 kilometers away from Seymour Island, with an unknown history but most definitely not revealed by melting due to air temperature in the northern Antarctic Peninsula. This is a prime case of jumping to conclusions before data has confirmed the origin of the island, and making unsound connections between heavily publicized events occurring in Antarctica.

Mike MacFerrin, Postdoctoral Research Associate, University of Colorado in Boulder:
The article isn’t wholly inaccurate in itself (aside from the map, which is very bad), but doesn’t really present anything new beyond what has already been published in other outlets. It moderately exaggerates the certainty of some points in which scientists still aren’t sure, but not enough to raise a big fuss over. Their map, however, is quite poor. The inset box is placed over the Antarctic Peninsula, several thousand km from the pin they placed in the Ross Sea, and both of them are more than 1000 km away from the actual location of Pine Island Bay in the Amundsen Sea (see attached image). It’s roughly the equivalent of drawing a box around Spain, putting a pin on Copenhagen, and labeling it “London.” 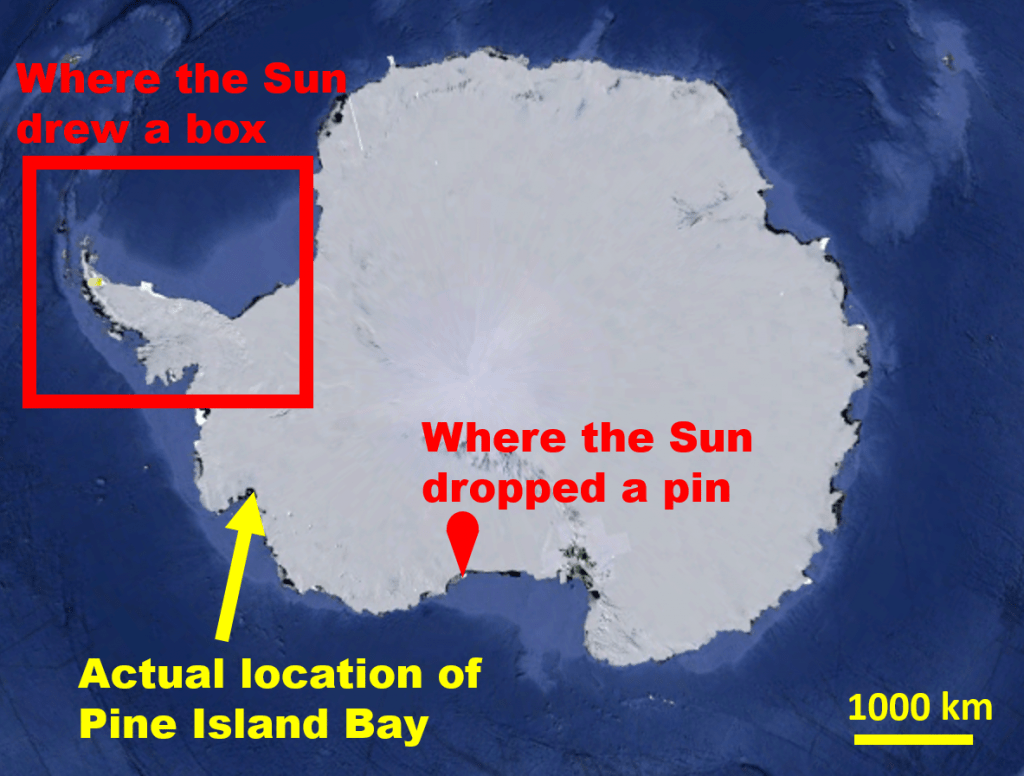 UNPRECEDENTED temperatures in Antarctica have resulted in a never-before-seen island emerging from the ocean.

Lauren Simkins, Assistant Professor, University of Virginia:
The record air temperature occurred on Seymour Island in the Antarctic Peninsula, over 2,000 kilometers from the uncharted island.

Because this island has just been identified and its history is completely unknown, we don’t know if it emerged from below sea level to above sea level by a process called glacial isostatic adjustment, or the floating ice shelf has simply retreated from the island. Regardless, based on historical satellite imagery, the island seems to have been uncovered in the early 2010s. Much work is needed to confirm whether the island emerged from beneath sea level or was deglaciated by the ice shelf retreating landward off the island.

Earlier this month, Antarctica recorded its hottest temperature on record, with the mercury lurching above 20C for the first time.

Lauren Simkins, Assistant Professor, University of Virginia:
The record temperature was recorded as one measurement and not a part of a long-term measurement dataset.

This has caused ice caps to melt and glaciers to retreat.

Lauren Simkins, Assistant Professor, University of Virginia:
To my knowledge, the record daily temperature is not responsible for widespread melt of glacial ice in the northern Antarctic Peninsula and certainly not an immediate retreat response in the local glacial systems.

Extreme melting and changes to the climate like this has released pressure on to the continent, allowing the ground to rise up.

Lauren Simkins, Assistant Professor, University of Virginia:
It is true that reduced ice load on the solid Earth leads to land rebound; however, it is not true or even plausible that a single record warm day is responsible for island discovery (possibly due to emergence or simply ice shelf retreat) 2,000 kilometers away.

The new island is made of granite

Lauren Simkins, Assistant Professor, University of Virginia:
This is true based on preliminary visual identification of rocks sampled on the island.

Lauren Simkins, Assistant Professor, University of Virginia:
This is not true, and was not stated by Dr. J.S. Wellner [whose photo this text is used to caption].

We’ve contacted them to ask more details about the size of the Sif.

Lauren Simkins, Assistant Professor, University of Virginia:
It is important to note for all media outlets that contacting scientists regarding discoveries made in the field or on the ship while in Antarctica is extremely difficult due to limited to no internet access. While on the ship, scientists do not have access to their institutional email accounts.