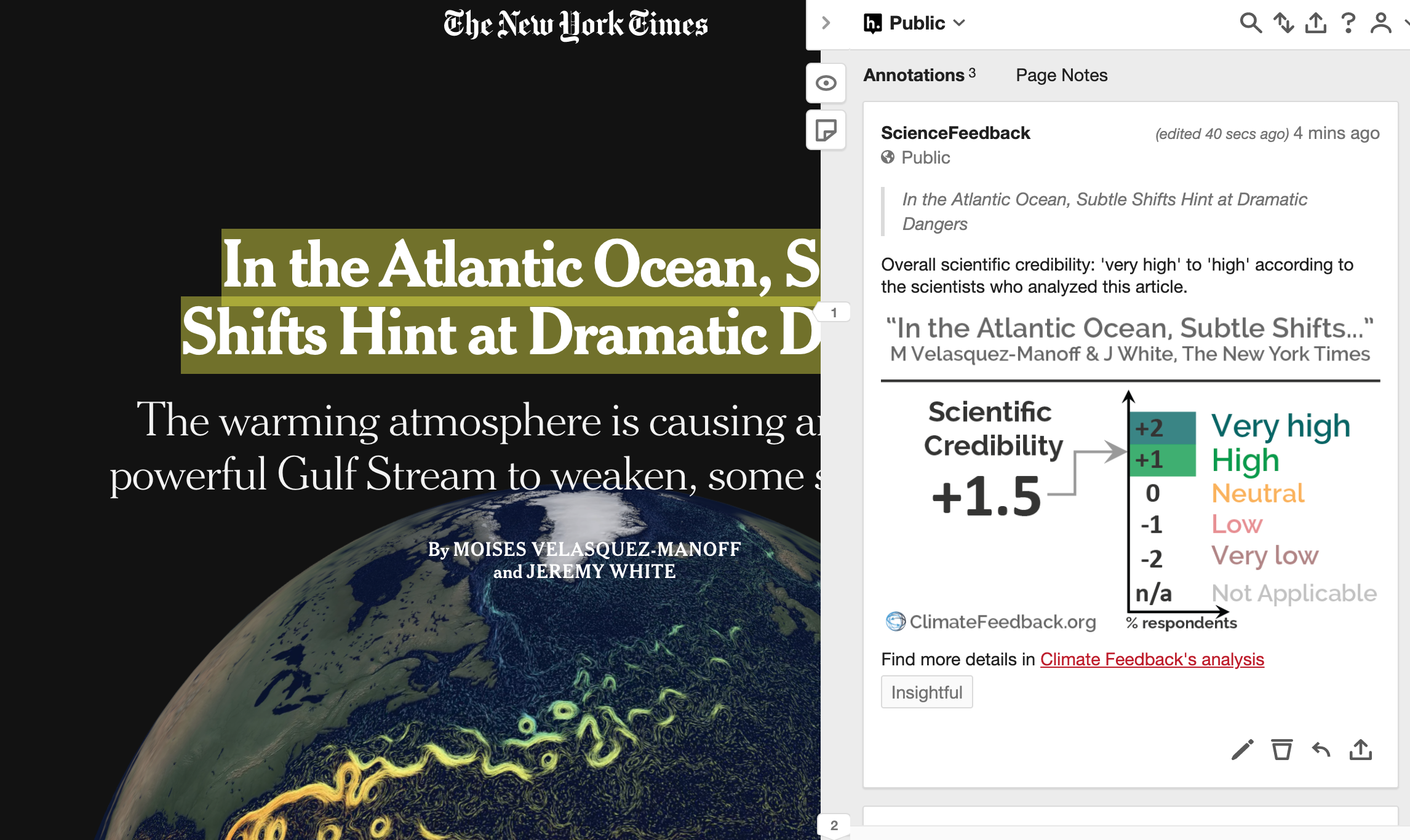 The article published in The New York Times discusses findings from a study published in February 2021 that reconstructed the evolution of the Atlantic Meridional Overturning Circulation (AMOC), an ocean circulation system that strongly influences Earth’s climate[1]. The AMOC redistributes heat on the planet as warm, surface water flows northward and cold, deep water flows southward. The article received more than 60,000 interactions on Facebook, according to the social media analytics tool CrowdTangle. Scientists who reviewed the article described it as insightful and accurate overall, however, they note a few minor points of confusion.

The recent study, among others, found that the AMOC started weakening during the 19th century and, in recent decades, reached its weakest state in over a millennium[1]. The slowdown of the AMOC can influence the climate by changing temperature and precipitation patterns, as accurately described in the article.

However, the article conflates the long-term warming hole or “cold blob” with the shorter-term 2015 North Atlantic cold anomaly. As the reviewers explain below, the ‘cold blob’ and the 2015 cold anomaly have different timescales and different underlying mechanisms. Specifically, the “cold blob” may be caused by a weakening of the AMOC, as discussed in the article, whereas the more recent cold anomaly appears to be caused by successive winters with extreme heat loss.

A reviewer also suggested that the article could be more clear about the distinctions between the Gulf Stream and the AMOC. The Gulf Stream refers to a warm, Atlantic ocean current that stretches from the Gulf of Mexico along the eastern U.S. Whereas the AMOC describes a network of currents at the surface, subsurface, and deeper levels of the ocean.

You can also install the Hypothesis browser extension to read the scientists’ annotations in context.

Dan Jones, Physical Oceanographer, British Antarctic Survey:
This article is well-written, and the visuals are outstanding. It is a very strong piece of science communication. That being said, there is at least one error. The author mistakenly conflates the long-term warming hole with the shorter-term North Atlantic cold anomaly. The two phenomena have very different timescales and are likely driven by different mechanisms. The long-term warming hole that is the focus of the NYT article may have been driven by the Atlantic Meridional Overturning Circulation (AMOC) slowdown as discussed, but the 2015 cold anomaly that was linked to European heat waves was a shorter-term phenomena that was likely caused by successive winters with extreme heat loss, as opposed to an AMOC slowdown.

Indeed, in the study by Duchez et al. that was linked to in the NYT article, the authors state “It is important to distinguish between this long-term warming hole and the short term 2015 cold anomaly that is the focus of our study.”[2] Unfortunately, the authors of the NYT article missed this distinction and conflated the two phenomena. To be fair, this is an easy mistake to make! Many of our own colleagues have confused the two phenomena at first glance.

For more information on the causes of the recent, short-term North Atlantic cold anomaly, see this review article[3].

Marcos Fontela, Postdoctoral researcher, Institute of Marine Research (IIM-CSIC):
It is a very powerful and insightful article. The article has awesome graphics and good selection of quotes, although it would be very nice to have the comments from the lead author of the article (L. Caesar). The article has very good, up-to-date references. Some minor comments:
1) As was already pointed by Dan Jones on twitter, they mixed the decadal-scale cold blob and the short-term subpolar North Atlantic 2015 cold anomaly.
2) In the article sometimes the distinction between the Gulf Stream and AMOC is not very clear. It’s true that sometimes the AMOC is called the Gulf Stream System, but because the AMOC is a network of currents, we should keep in mind that Gulf Stream and AMOC are not synonyms. There are more currents in the AMOC and they are not only in the surface-subsurface layer.

Stefan Rahmstorf, Professor, Potsdam University:
The article provides a very good and credible overview of recent scientific findings regarding the Atlantic Meridional Overturning Circulation (AMOC) and nicely covers science history all the way back to discoveries in the 16th Century. It properly describes the relationship between Gulf Stream and AMOC, and it uses beautiful visualisations.

One minor comment, it describes our recent study as providing “reconstructions of sea temperature around the North Atlantic, some going back 1,600 years”, whilst what we mostly provided are proxy data series for AMOC strength from the sediments at the bottom of the Atlantic, most of which are unrelated to temperature. But that is just one sentence in an otherwise great article.

Didier Swingedouw, Researcher, CNRS (French National Center for Scientific Research):
Generally speaking, the article is sound and has numerous sources of scientists to equilibrate the debate. There are only a few things that are maybe exaggerated and not clearly explained in my opinion, e.g.: The estimate that the AMOC has weakened by 15% is not in Rahmstorf et al. (2015)[4], but in Caesar et al. (2018)[5]. Also, the sentence “Hurricanes derive their energy from heat in the water” is a bit misleading when referring to mid-latitude storms. The fact that a weakening AMOC might enhance their probability is mainly due to strengthening of equator-pole temperature gradient. Consensus is low on the paper cited in the article. Why not refer to the IPCC chapter 6.7 special report on extremes, abrupt changes, and managing risks in the ocean and cryosphere in a changing climate instead to find consensus on potential climatic impacts?[6]

“Scientists at the U.K.’s National Oceanography Centre have somewhat counterintuitively linked the cold blob in the North Atlantic with summer heat waves in Europe. In 2015 and 2018, the jet stream, a river of wind that moves from west to east over temperate latitudes in the northern hemisphere, made an unusual detour to the south around the cold blob. The wrinkle in atmospheric flow brought hotter-than-usual air into Europe, they contend, breaking temperature records.”

Here, the decadal-scale warming hole that is possibly linked to AMOC slowdown has been conflated with the shorter-term cold anomaly that featured record low North Atlantic sea surface temperatures in 2015.

The authors of the U.K.’s National Oceanography Centre study are careful to make this distinction in their article: “It is important to distinguish between this long-term warming hole and the short-term 2015 cold anomaly that is the focus of our study.”[2]

The long-term warming hole that is the focus of this New York Times article is not the same thing as the short-term 2015 cold anomaly. The two phenomena have very different timescales and different causes. Current understanding suggests that the short-term 2015 cold anomaly was caused by successive winters with extreme heat loss, i.e. it was largely driven by changes in air-sea heat exchange. The longer-term warming hole may have been caused by the AMOC slowdown, as discussed in this article.

For more information on the 2015 cold anomaly and its causes, see this review article led by Simon Josey[3].

““That was not predicted,” said Joel Hirschi, principal scientist at the centre and senior author of the research. It highlights how current seasonal forecasting models are unable to predict these warm summers. And it underscores the paradox that, far from ushering in a frigid future for, say, Paris, a cooler North Atlantic might actually make France’s summers more like Morocco’s.”

As in the paragraph above, here the long-term warming hole has been conflated with the short-term North Atlantic cold anomaly, which are phenomena with very different timescales and causes.

Conflating the two mechanisms and timescales has resulted in some confusion in this part of the article.