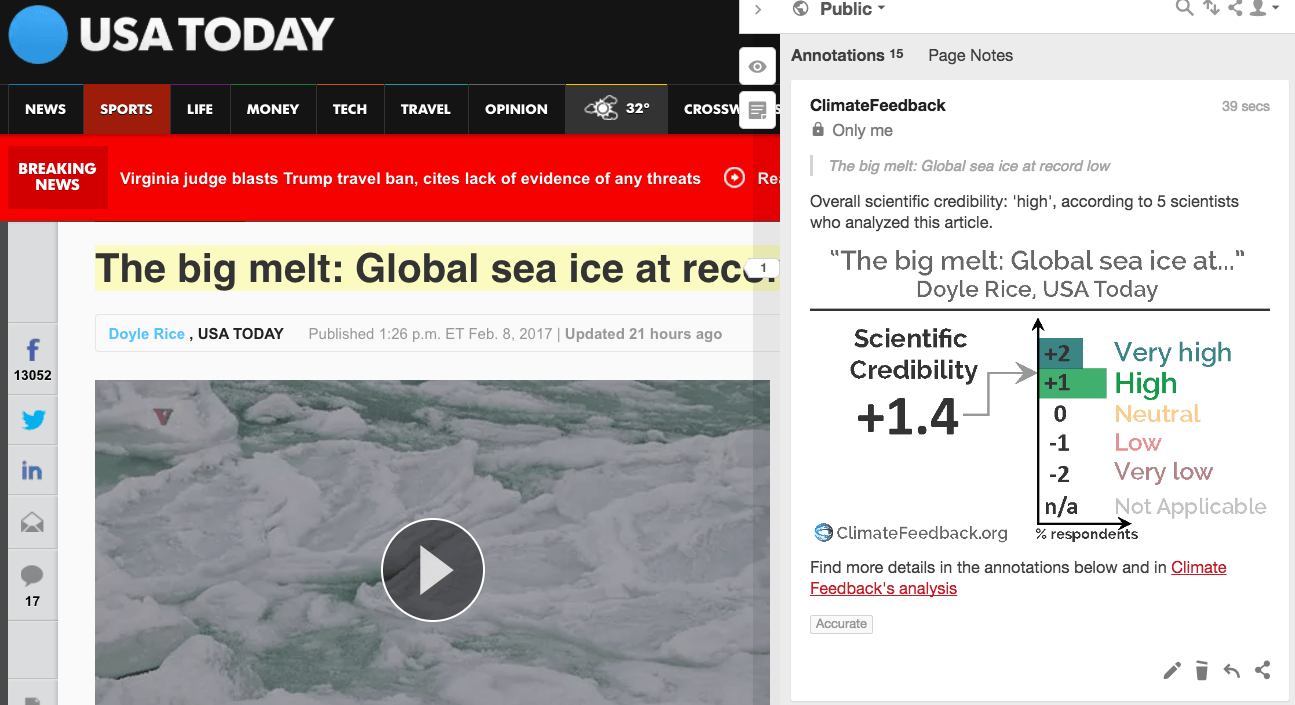 This USA Today article by Doyle Rice describes a US National Snow & Ice Data Center announcement that the combined extent of Arctic and Antarctic sea ice set a record low for January extent.

Steffen Tietsche, Senior Scientist, European Centre for Medium-Range Weather Forecasts:
The article does a good job in conveying the basic facts about sea ice and how it has been changing to a reader without prior knowledge of the subject. The strong statements it makes about the recently observed sea ice extremes are correct, and backed up by appropriate numbers, figures, and expert quotations and references.

Michel Tsamados, Lecturer (Assistant Professor), University College London:
This is a factual article and gives an accurate representation of the state of the sea ice cover in 2016/2017. One small caveat is that the author states that “sea ice is shrinking to levels not seen in thousands of years” which is a bit vague and still a topic of active research. The IPCC report has a more timid statement (maybe too cautious?).

François Massonnet, Postdoctoral Research Fellow, Université catholique de Louvain:
This article is based on facts, and does not attempt to over-interpret or extrapolate from these facts. References to the sources are provided. I consider the article trustworthy.

Alek Petty, Postdoctoral associate, NASA Goddard Space Flight Center:
The article did a pretty good job in general of discussing recent sea ice decline, relying mainly on information from the NSIDC and NASA (reliable sources). The article was sometimes a bit loose in the language used, however (as highlighted by the annotations). This was somewhat unfortunate, as it would have been a good opportunity to provide the reader with more insight into the impact of sea ice decline, and the open questions that remain (e.g. regarding how it might impact US weather).

Twila Moon, Research Scientist, University of Colorado, Boulder:
An excellent article that does a good job of summarizing current measurements of the loss of sea ice, especially in the Arctic. The article also hits on why this change is important and that the reduction in sea ice is directly connected to man-made climate change. These are important scientific points.

1. Global sea ice extent is at an all time low.

“There is now less sea ice on Earth than at any time on record. Ice in the Arctic and Antarctic melted to record low levels in January, scientists reported this week.”

Michel Tsamados, Lecturer (Assistant Professor), University College London:
Focusing on sea ice extent can be dangerous as it is partly driven by short-term weather patterns, in contrast to the volume of sea ice that is now regularly monitored by European Space Agency satellite Cryosat and is more indicative of slower climatic changes.
Having said that, 2016/2017 has displayed such unusual patterns in total sea ice extent that it has triggered renewed interest in the scientific community. 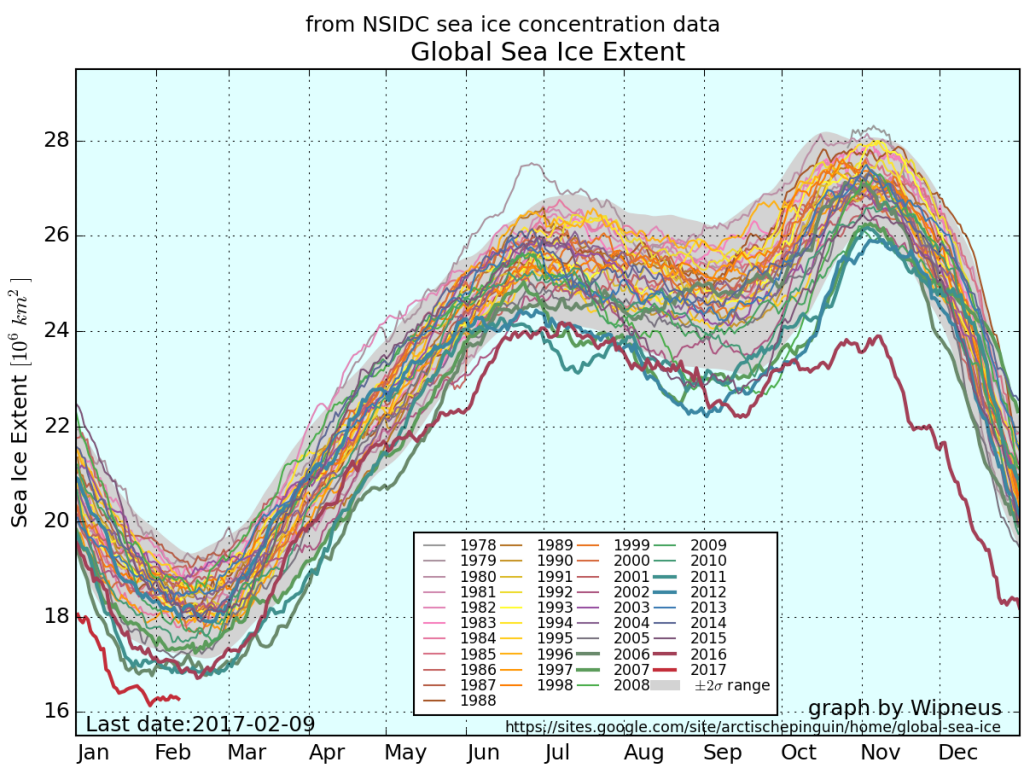 François Massonnet, Postdoctoral Research Fellow, Université catholique de Louvain:
One has to bear in mind that the seasonal developments of Arctic and Antarctic sea ice are out of phase by ~6 months. Hence, the Earth’s “total” sea ice extent is a number with limited meaning, and is not directly obvious to interpret. In addition, this number smooths out regional variations, which can be particularly pronounced in the Antarctic.

Nevertheless, just like global-mean temperature or the GDP of a country, this number can be useful to have a 0th-order view on the health and state of our planet.

Michel Tsamados, Lecturer (Assistant Professor), University College London:
The relevant assessment from the latest IPCC report (Chapter 5 Information from Paleoclimate Archives) is: “There is medium confidence from reconstructions that the current (1980–2012) summer sea ice retreat was unprecedented and sea surface temperatures in the Arctic were anomalously high in the perspective of at least the last 1450 years. Lower than late 20th century summer Arctic sea ice cover is reconstructed and simulated for the period between 8000 and 6500 years ago in response to orbital forcing.”

2. The pronounced loss of sea ice in the Arctic is largely due to human-caused climate change, but natural variability can also be considerable—especially in the Antarctic.

“‘Greenhouse gases emitted through human activities and the resulting increase in global mean temperatures are the most likely underlying cause of the sea ice decline,’ the snow and ice data center said.”

François Massonnet, Postdoctoral Research Fellow, Université catholique de Louvain:
Observed trends in Arctic sea ice result from the superposition of forced, man-made variations and internally generated variations. While it is clear from the literature (see IPCC WG1 AR5 Chapter 10 for a review) that observed trends cannot be explained by internal variability alone, it should be remembered that internal variability can also modulate the forced trends, in a way that is complex to properly describe.

In conclusion, greenhouse gases are well responsible for the observed decline, but their effect on sea ice trends may have even been amplified by internal variability.

“The amount of summer sea ice in the Arctic has steadily declined over the past few decades because of man-made global warming, according to the National Oceanic and Atmospheric Administration.”

“Sea ice thickness also substantially declined in the latter half of the 20th century, the snow and ice data center said.”

Twila Moon, Research Scientist, University of Colorado, Boulder:
This is an important change to emphasize because sea ice thickness is also an indicator of sea ice age. While thin sea ice can reform more quickly year to year, thick sea ice requires more time. The loss of thick sea ice is perhaps even more striking than the loss of ice area.

François Massonnet, Postdoctoral Research Fellow, Université catholique de Louvain:
It should be added here that this is talking about Arctic sea ice.

“At the bottom of the world, sea ice is also at all-time record low levels around Antarctica, the data center said. The lack of ice in the Antarctic, where it is currently summer, is most pronounced in the Amundsen Sea, where only a few scattered patches of ice remain.” 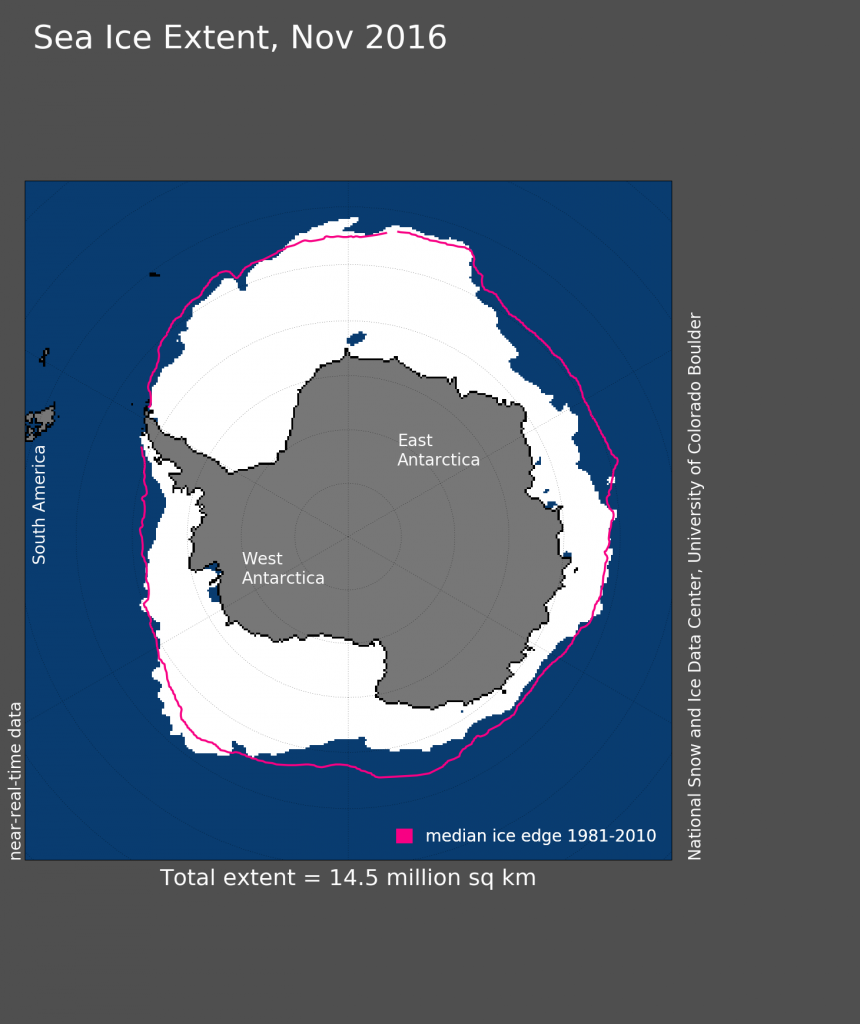 Three months later, the extent anomaly has persisted but is due to an unusual ice retreat in the Amundsen sector—i.e., at the exact opposite location—as the article correctly reports: 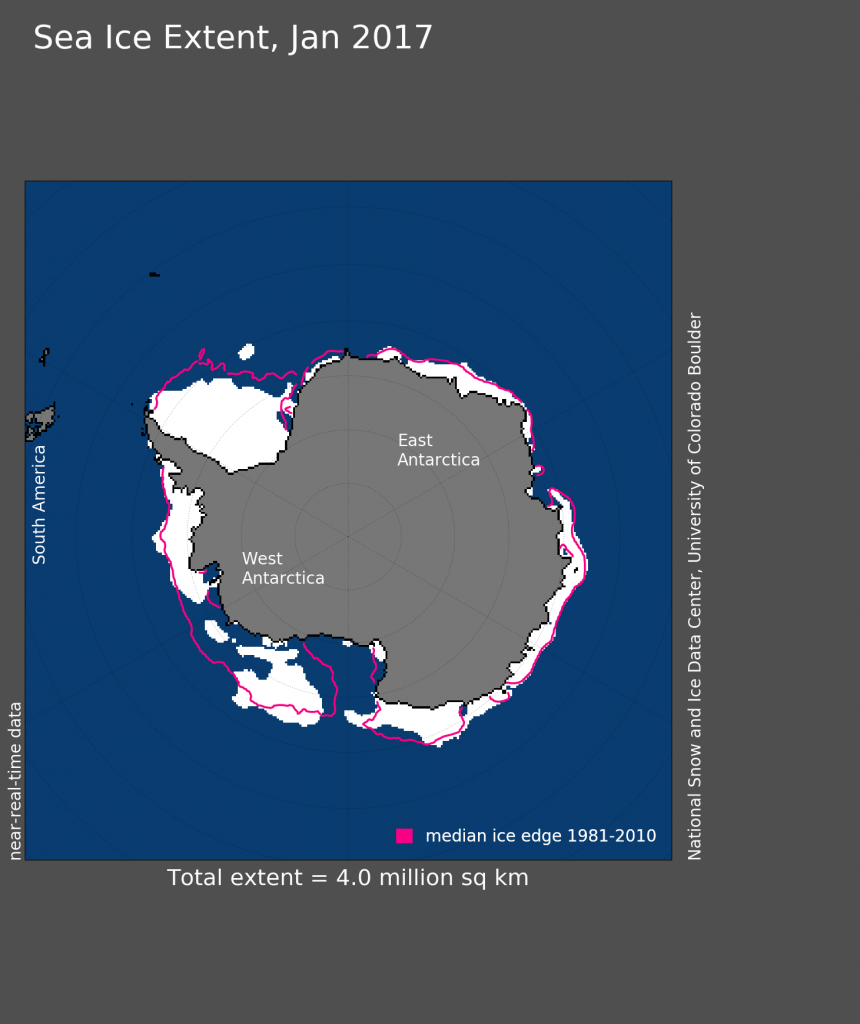 This short example reveals why sea ice extent is a useful, but not sufficient diagnostic to characterize the recent sea ice variability.

Michel Tsamados, Lecturer (Assistant Professor), University College London:
This is true for the Antarctic, while the Arctic is expected to respond more significantly to climate change—the so-called polar amplification. This is described in detail in Box 5.1 | Polar Amplification of IPCC chapter 5 Information from Paleoclimate Archives.
On short time scales (~100 years) the Antarctic response differs from the Arctic and displays a delayed warming. There are several hypotheses proposed (see, for example, Ferreira et al, 2016*).

3. Sea ice loss can influence climate and weather patterns beyond just the polar regions, but some aspects of these connections are still uncertain.

“[Sea ice] also helps regulate the planet’s temperature by influencing the circulation of the atmosphere and ocean. It can affect weather in the U.S.”

Michel Tsamados, Lecturer (Assistant Professor), University College London:
Sea ice acts as an insulating blanket over the Arctic Ocean and by removing it (via our impact on the climate) we are “performing the largest experiment in oceanography”, allowing the winds and atmosphere to directly interact with the Arctic Ocean and therefore potentially waking up the “sleeping Arctic Ocean” both mechanically and thermodynamically. (See the Lunch Hour Lecture at University College London below.)

Twila Moon, Research Scientist, University of Colorado, Boulder:
Sea ice cover is also better at reflecting energy from the sun than open ocean. This makes sea ice an important player in keeping the ocean surface from taking up additional heat.

François Massonnet, Postdoctoral Research Fellow, Université catholique de Louvain:
There is currently no consensus in the scientific community about the magnitude of Arctic-lower-latitudes teleconnections compared to other teleconnections (e.g. from the tropics). This statement has to be taken with caution.