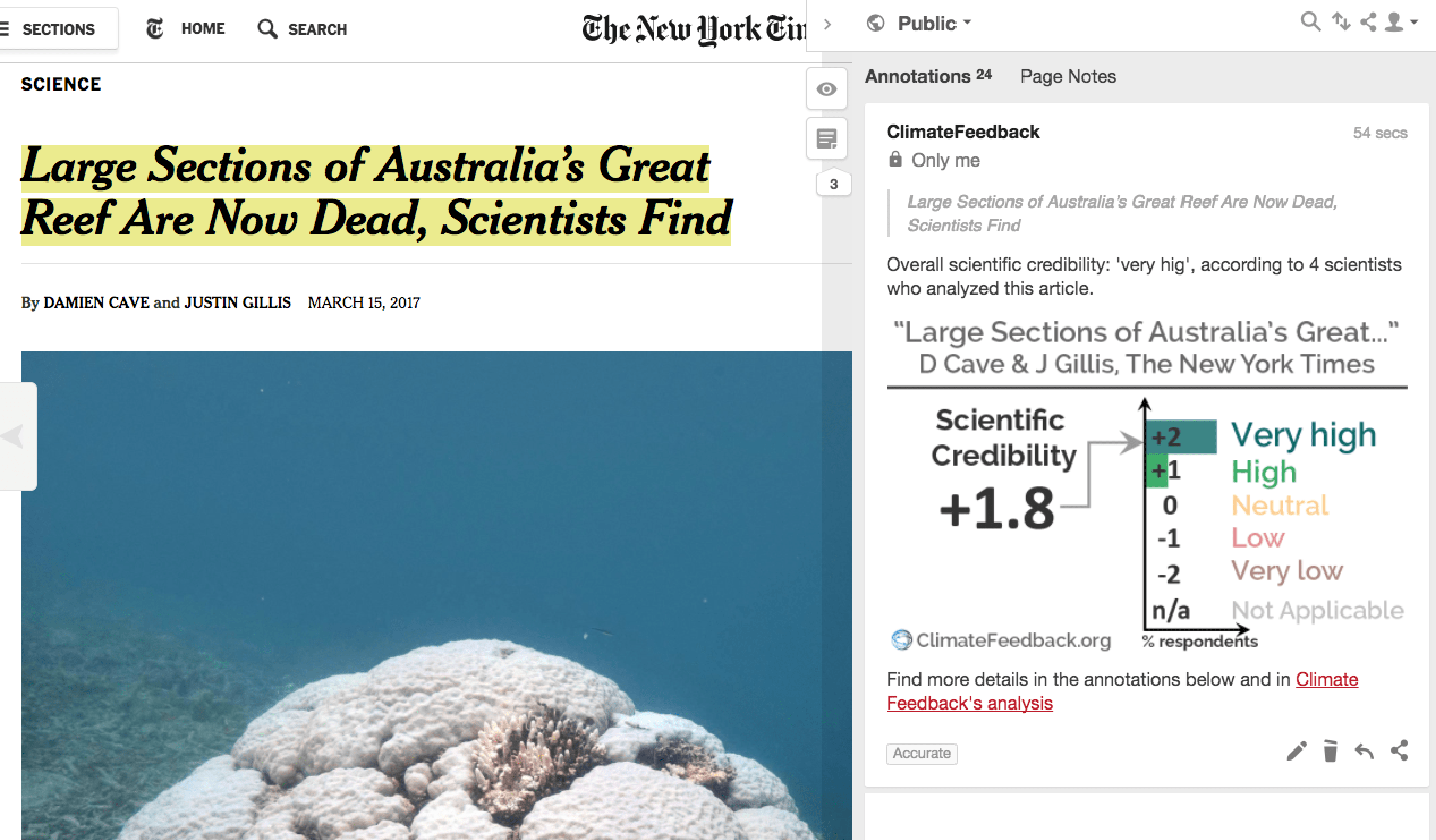 The New York Times published an article on coral bleaching and mortality in the Australian Great Barrier Reef and the influence of climate change. Scientists who reviewed the article deemed it largely accurate. While last year saw a record bleaching event that ended up damaging a record number of corals in the region. Severe bleaching has continued for a second consecutive year, which is unprecedented. While natural temperature fluctuations (due to El Niño, for example) have always occurred, they are now superimposed on a warmer background due to human-induced global warming. That causes mass coral bleaching to happen more frequently.

Under a business-as-usual scenario of greenhouse gas emissions, coral reef ecosystems are expected to undergo major losses as their slow development and habitat requirements prevents fast migration towards cooler regions.

Ove Hoegh-Guldberg, Professor and Director, Global Change Institute, University of Queensland:
This is an important article that relates the latest science. Even though people may find it shocking, we are facing a serious downward trend in the world’s largest continuous coral reef system.

John Bruno, Professor, The University of North Carolina at Chapel Hill:
Overall, this was an accurate article. There were three sentences that was just a tad off—to be clear, these are minor quibbles (see below).

Mark Eakin, Scientist, Coordinator of NOAA’s Coral Reef Watch, National Oceanic and Atmospheric Administration:
It is a very nice article. A couple of spots are a bit overstated but this article appears well-researched and carefully worded.

“Huge sections of the Great Barrier Reef, stretching across hundreds of miles of its most pristine northern sector, were recently found to be dead, killed last year by overheated seawater.”

For validation, see our previous analysis of an article in USA Today titled “Australia’s Great Barrier Reef has worst coral die-off ever”.

“An additional kick was supplied by an El Niño weather pattern that peaked in 2016 and temporarily warmed much of the surface of the planet, causing the hottest year in a historical record dating to 1880.”

John Bruno, Professor, The University of North Carolina at Chapel Hill:
This is a very common misconception even among scientists. The warming, bleaching, and coral loss is 100% due to greenhouse gas emissions, not the ENSO cycle and the fact that we were in a peak of the El Niño phase in early 2016. The Great Barrier Reef has experienced El Niño events for thousands of years, yet bleaching wasn’t observed there until 1998 when ocean warming pushed ocean temperatures just above the bleaching threshold.

2. Some corals could potentially migrate to cooler waters, but the rapid pace of warming means most coral will be lost.

“The global reef crisis does not necessarily mean extinction for coral species. The corals may save themselves, as many other creatures are attempting to do, by moving toward the poles as the Earth warms, establishing new reefs in cooler water.”

Simon Donner, Associate Professor, The University of British Columbia:
Minor quibble: the article mentions corals potentially migrating towards the poles. While coral species may spread poleward as the ocean warms, it takes many years for the reef structure to grow, thus the habitat for other reef species may not be easily recreated.

Mark Eakin, Scientist, Coordinator of NOAA’s Coral Reef Watch, National Oceanic and Atmospheric Administration:
This is rather overstated. While some weedy species may migrate poleward, studies have shown that corals cannot move to much higher latitude due to other factors, such as the light corals require for photosynthesis and skeletal growth. Higher latitude corals will also be restricted to shallow water where they are more susceptible to cold stress.

“If water temperatures stay moderate, the damaged sections of the Great Barrier Reef may be covered with corals again in as few as 10 or 15 years”

John Bruno, Professor, The University of North Carolina at Chapel Hill:
First, they aren’t moderate now. If they were to decrease and not exceed the bleaching threshold for another few decades, there would be some coral recovery. Second, 10-15 years is a big stretch. There would be some recovery, but not total recovery, especially of very long-lived slow-growing species.

“Within a decade, certain kinds of branching and plate coral could be extinct, reef scientists say, along with a variety of small fish that rely on them for protection from predators.”

John Bruno, Professor, The University of North Carolina at Chapel Hill:
I think it is very unlikely any corals would be extinct in a decade. The problem isn’t threat of extinction, its loss of habitat for other critters when corals bleach and die. The corals become less dense, but there will still be many millions of colonies for most species.