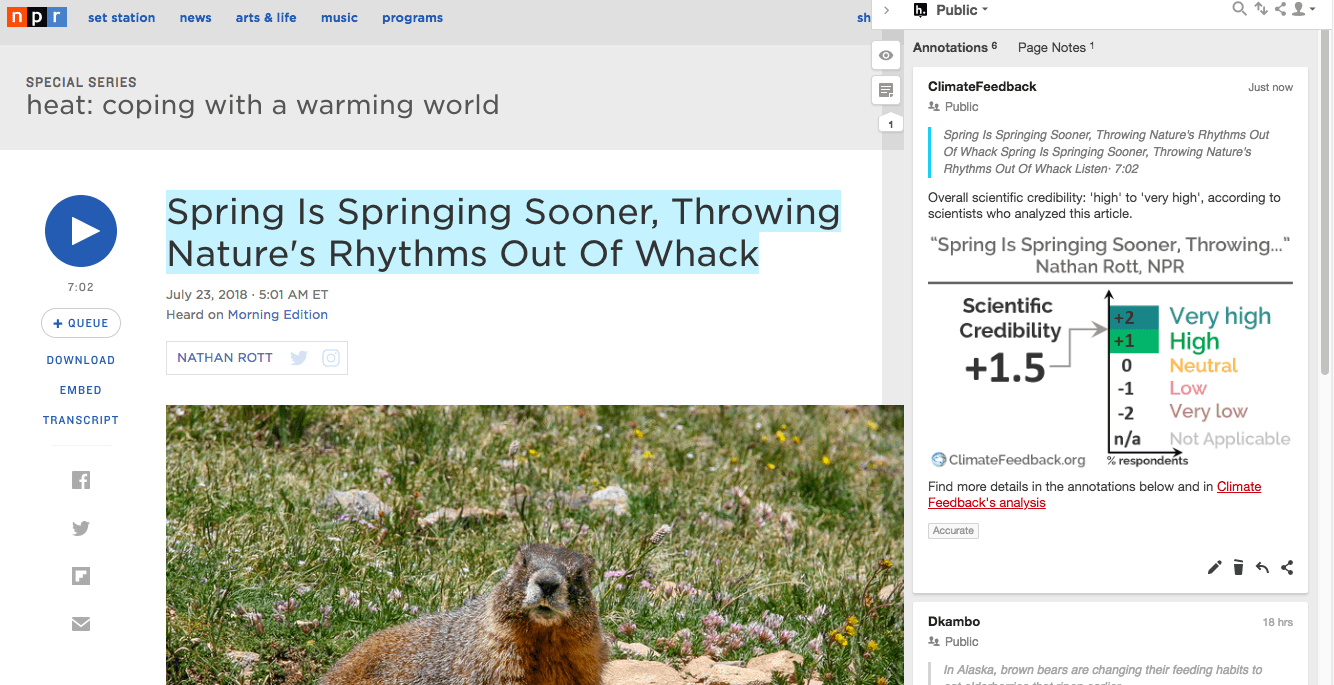 This article at NPR discusses what happens when warm spring weather arrives earlier because of climate change. Animals must adjust to changes in the timing of plant flowering, for example, leading to noticeable desynchrony in the ecosystem, e.g. “Flowers are blooming before there are bees to pollinate them. Hard frosts are still occurring long after winter’s snow melts away, decimating fruit orchards and budding plants.”

Scientists who reviewed the story found that it accurately represented trends in data and research on the topic. They found only a few statements that could be improved, such as referencing snowpack in April rather than January to better relate to spring conditions.

Dasvinder Kambo, PhD Candidate, Queen's University:
I believe that the article is well written and it is mostly supported by the evidence. However, there were a few places where I believe the evidence was not as strong for the given statement.

Mark Eakin, Scientist, Coordinator of NOAA’s Coral Reef Watch, National Oceanic and Atmospheric Administration:
Really more like a 1.9 rating [than 2.0] because they should have quoted the April snowpack data, not January.

In Alaska, brown bears are changing their feeding habits to eat elderberries that ripen earlier.

This was a good paper they cited*. It clearly demonstrated a shift from hunting salmon to elderberry, which fruits earlier.

“The April low temperatures here are now about 6 degrees Fahrenheit warmer than they used to be.”

Colorado’s snowpack this year was the worst it had been in .

This statement cites the January snowpack. The April snowpack is the measure of peak snowpack at the end of the season. It should have quoted this story, instead. The conclusion would have been similar but not the “more than 30 years” figure.

“We have less flowers.”

Would be nice to have species listed here. Purely because in some cases it’s not whether flowers are ‘fewer’, but rather their flowering time has been altered.

Species that have a lot of plasticity tend to be generalists.

While this statement is true on a theoretical level, I’m not sure the appropriate research has been done on a large scale in alpine ecosystems.

And there is a lot of evidence that climate change is diminishing biodiversity, which can be seen in these alpine meadows as well.

Not an adequate reference (linked) for such a strong claim. I recommend incorporating the following paper: