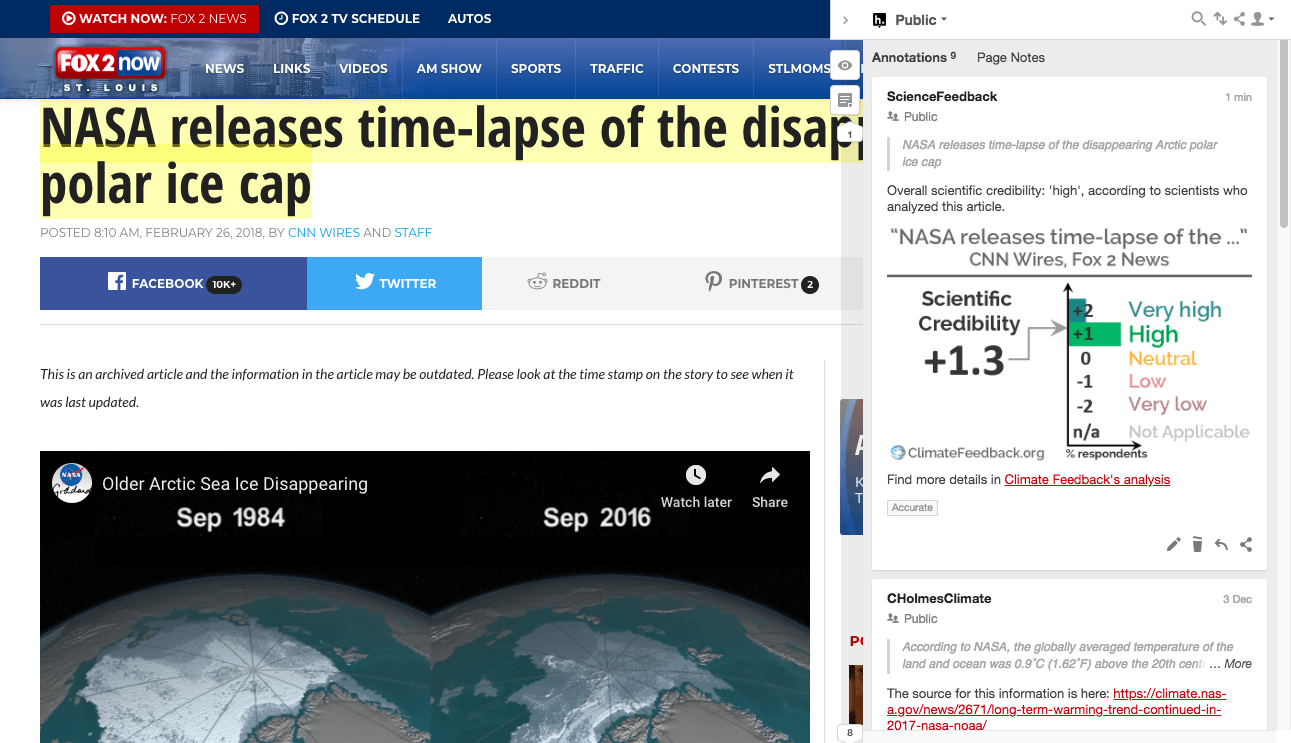 This February 2018 article on the website of Fox 2 St. Louis—based on an article syndicated from CNN—reported on 2017 climate data released by NOAA and NASA. It notes that 2017 ranked as the second/third (depending on dataset) warmest year on record, and annually averaged sea ice extent in the Arctic was at its second lowest extent.

Scientists who reviewed the article found that it accurately conveyed this information. However, a couple statements lack clarifying details. It is not explained that the sea ice extent numbers given relate to annual mean extent rather than summer minimum extent, for example, or that temperature was given relative to the 1951-1980 average.

Christopher Merchant, Professor, University of Reading and UK National Centre for Earth Observation:
The NASA movie [below] shows the power of being able to visualise what has been happening to the environment over many years, in this case for Arctic sea ice. The evidence of change is plain to see. The facts-driven description in the article that accompanies the movie addresses developments in other parts of Earth’s climate system straightforwardly and informatively.

The article is factually correct. The reality that Arctic sea ice is getting younger [rather than surviving for several years and growing thicker] is not so well known from the public, so such an article is welcome.

The article’s title and the front video are about sea ice, but most of the rest of the text is about global temperatures. There has been clear evidence that the two (rising temperatures and declining sea ice) are linked on long time scales (say, >15 yr), but interannual fluctuations of the latter are more difficult to formally relate to the former.

Stephen Po-Chedley, Research Scientist, Lawrence Livermore National Laboratory:
Overall, I thought the article provided a good summary of the major climate features of 2017. The article mentioned a number of geophysical metrics, including sea ice, temperature, extreme events, and snow cover. The article had a good discussion of the impact of natural El Niño/La Niña variability (despite a slightly inaccurate description of El Niño/La Niña), noting that 2017 was the hottest year on record if El Niño/La Niña events are statistically removed. The article also included a brief, but warranted discussion of the Paris Climate Agreement.

Caroline Holmes, Polar Climate Scientist, British Antarctic Survey:
The article is credible and the overall message/insight conveyed to the reader is accurate.

However, the reader could be easily misled on some details because some of the values quoted are given with insufficient information and without traceable sources. (The 2017 temperature anomaly quoted is relative to 1951-1980. The Arctic sea ice ‘second lowest’ refers to the annual mean.)

According to NASA, the globally averaged temperature of the land and ocean was 0.9˚C (1.62˚F) above the 20th century average. This puts us well over halfway to the ambitious target of limiting warming to 1.5˚ C (2.7˚F) set in the 2016 Paris Climate Agreement.

The source for this information is here. 2017 was 0.9°C warmer than 1951-1980. The Paris agreement target was “[to keep] the global temperature rise this century well below 2 degrees Celsius above pre-industrial levels and to pursue efforts to limit the temperature increase even further to 1.5 degrees Celsius.

Pre-industrial is an earlier period than 1950-1981, so “well over halfway… to 1.5°C” is therefore still true. Therefore the spirit of the statement in these sentences is true although the details are slightly inaccurate.

This should be “in the central and eastern-central equatorial Pacific”.

La Niñas, on the other hand, feature cooler than average waters in the Pacific

This should be “in the eastern equatorial Pacific”.

Sea ice continued its declining trend, both in the Arctic and Antarctic.

It is misleading to already call the recent turn in Antarctic sea ice a declining trend. “Trend” suggests something happening long-term; as stated in the next sentence, the Antarctic downturn is recent.

The Antarctic, which was trending at record high levels just a few years ago, reached a record low during 2017

Both in the annual-mean and for the minimum extent and other summer months. (See NOAA’s summary.)

In the Arctic, sea ice extent was the second-lowest since records began in 1979, behind only 2016,

This is true for the annual average; for the September minimum extent, which is often discussed, the minimum was 2012.