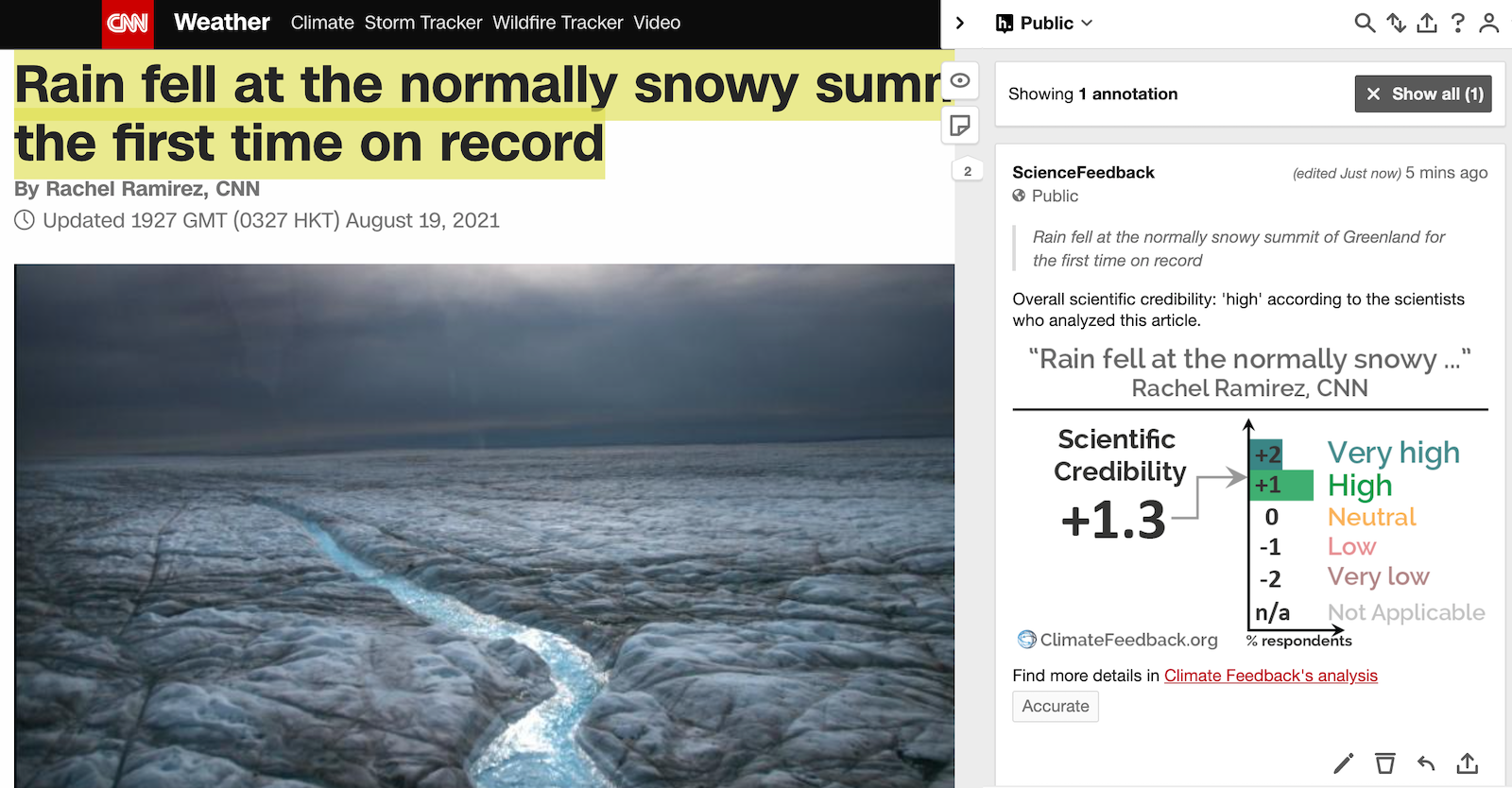 An article published in CNN discusses observations made by scientists stationed at the highest point on the Greenland ice sheet. Reporting on a summary released by the US National Snow and Ice Data Center (NSIDC), the article describes how rain, instead of snow, fell at Greenland’s summit in August 2021 for the first time in the instrumental record. Combined with above-freezing air temperatures, this led to seven times more ice lost by melting from the ice sheet during the August event compared to the 1981-2010 average ice melt for the same time of year. Scientists who reviewed the CNN article, which received more than 95,000 interactions on social media according to the analytics tool Buzzsumo, described it as ‘highly accurate’. However, they noted it could be clearer on a couple of aspects, including that many of the results described in the article are derived from models, not direct observations.

The NSIDC report, published online on August 18, summarizes the extreme weather conditions that scientists encountered at the Summit Station in Greenland on August 14 and 15. The station is located at 3,216 meters (10,551 ft) above sea level and is occupied year-round. The report explains:

“On August 14, 2021, rain was observed at the highest point on the Greenland Ice Sheet for several hours, and air temperatures remained above freezing for about nine hours. This was the third time in less than a decade, and the latest date in the year on record, that the National Science Foundation’s Summit Station had above-freezing temperatures and wet snow. There is no previous report of rainfall at this location (72.58°N 38.46°W), which reaches 3,216 meters (10,551 feet) in elevation.”

The CNN article reports on the physical observations at the weather station and model estimates of the total amount of ice lost as a result of the elevated temperatures and rainfall. Reviewers suggested that the difference between rain and melting (and the potential impacts of these events on sea-level rise) could have been better explained in the CNN article. They also mentioned that the author of the article could have been more explicit about the fact that the total amount of ice mass lost was derived from a model.

While the claims in the CNN article accurately reflect the available data (and the NSIDC report), one reviewer noted that additional context could have been useful. For example, there is a lack of measurement stations over much of Greenland, meaning that it is possible rain fell at the summit before but was not captured.

Overall, scientists agree that the rain event was an ‘extreme event’ that demonstrates the impact of climate change on the Greenland ice sheet and that the CNN article captured that well, even if there are some points of clarification that could further improve the article’s accuracy and scientific context.

Ted Scambos, Senior Research Scientist, National Snow and Ice Data Center:
It is typical for accuracy for the press – CNN and BBC and many others tend to write about climate such that the events sound more exciting, and less qualified or approximate.

The main omission is that the rain event over the whole island was the largest for those days in August, and that the amount is an estimate from a model, based on weather re-analysis (which I think I explained to Rachel [Ramirez, the journalist who wrote the story on CNN]).

That the overall ice sheet runoff was seven times higher than ’normal’ (1981-2010 average) is not hard to believe, because runoff tails off abruptly after the first week in August in most years. The event was a warm spike over about 50% of the island, and a lot of the southwestern slope was still in late summer mode.

The statement about the crust at Summit Station forming a layer that would enhance run-off is a slight misquote: increased melting on the flanks of the ice sheet has led to thick ice layers that allow greater runoff.

We should retain our stance that this was a major climate anomaly for Greenland and that the public was appropriately informed about the event — it is not an exaggeration to say it was an extreme event. The later Twitter reports of other melting events in the 1930s and 1950s do not include the Summit Station area, and that analysis of the GISP-2 and GRIP cores, and many others, show that melting (or rain, which would look like a melt event) is rare in the ‘dry snow zone’ of Greenland — hence the name.

Kent Moore, Professor, University of Toronto:
The article is highly factual.  One issue that we have is the lack of data over the Greenland Ice Sheet (both spatially and temporally).

Thus some of the claims, although backed by the limited data, are valid; we can’t be sure that we may have missed similar outliers.

For example, we can’t be sure that a rain event of the type described did not occur in the period before observations were made or may have occurred somewhere on the ice sheet before in a region without any observations.

Xavier Fettweis, Research scientist, University of Liege:
The numbers and statistics given in the CNN article are based on a report from NSIDC which is:

According to this paper, MAR is one of the internationally recognized models to quantify the surface mass balance of the Greenland ice sheet, and only outputs of models like this can give statistics such as the one listed in the CNN article.”

Mira Berdahl, Postdoctoral Scholar, University of Washington:
This article is meant for a general audience and does well to emphasize the fairly drastic effects of climate change on the Greenland ice sheet. However, there are a few statements throughout, (e.g., global sea level rose permanently by 1.5 millimeters as a result), which I find slightly frustrating. I wouldn’t, for example, claim sea level rise is permanent (on what time scale?). Also, there should be more care taken to distinguish between rain events and melt events at the summit. I worry these could be confused if not explicitly explained. Also, I think the mention of polar bears, while interesting, is fairly tangential to this story.

Overall, the story is worth getting out there, it is true that rain did fall for the first time in recorded history at the summit.