TO VIEW THE VIDEO, COPY AND PASTE THIS ADDRESS INTO YOUR BROWSER: https://www.youtube.com/watch?v=mtHreJbr2WM

3’30: “There is no empirical evidence that increasing greenhouse gases are the primary cause of Global Warming” 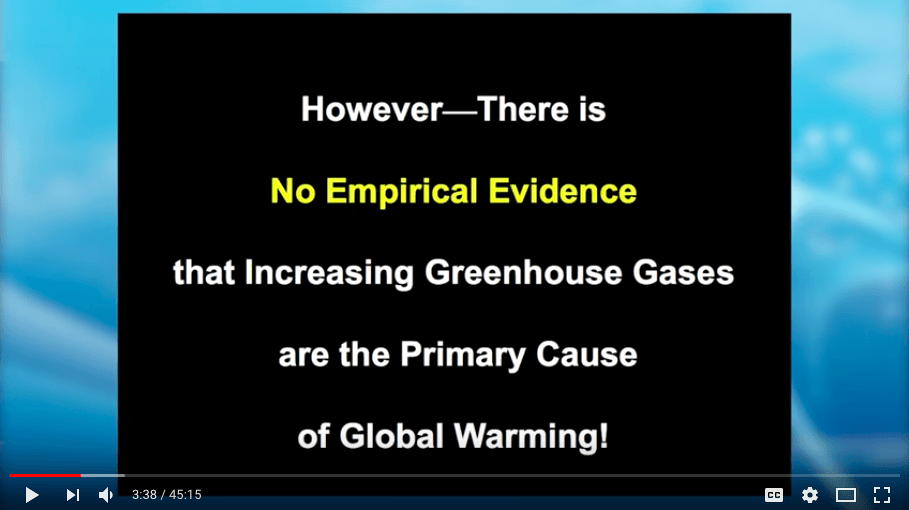 4’45: “Our temperatures in Chicago vary from about -5 Fahrenheit to 95 Fahrenheit every year[…] I’m going to superimpose on this the amount that global surface temperatures have risen in the last 130 years[…] That’s what climate scientists tell us is a coming calamity.”

5’24: “Of course climate change is real, climate has been changing for all of Earth’s history”

6’10: “It was warmer a thousand years ago [when Vikings lived in Greenland] than it is today.”

6’12: “Greenland was warmer a thousand years ago than it is today”

7’51: “the record refers to the thermometer record, which is only a 130 years long… see that little green dot on the right, that’s the record. Wow that is really scary isn’t it. That is very misleading: that ignores all the period over the past 10,000 years when it was warmer than it is today” 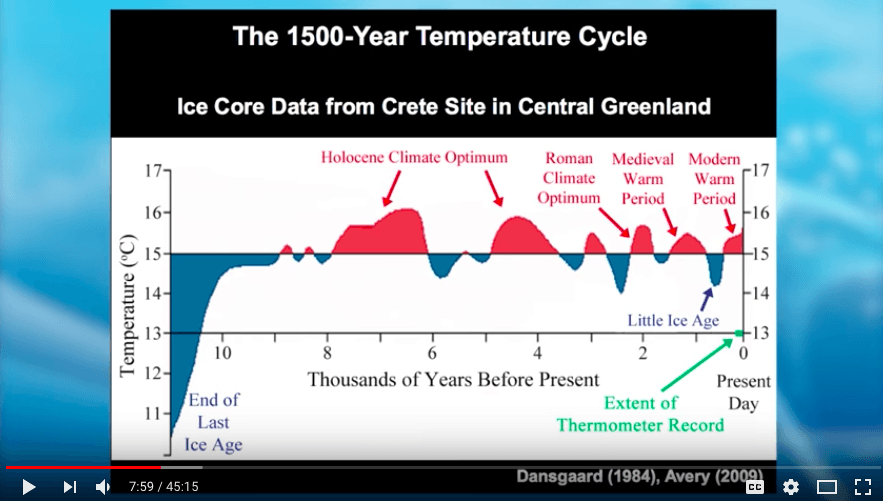 11’18: “Today climate scientists are obsessed with the level of carbon dioxide in the atmosphere, a very very small part of the overall picture. Carbon dioxide is a trace gas.”

11’52: “But what is nature’s most abundant greenhouse gas? Water vapour. It’s not carbon dioxide, it’s not methane… Scientists estimate that somewhere between 75% and 90% of Earth greenhouse effect is caused by water vapour in clouds.” 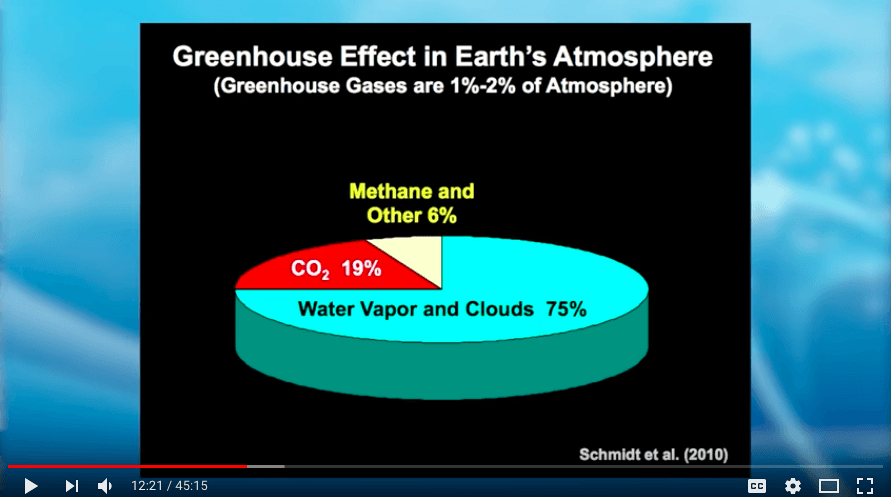 13’06: “Every day, nature puts twenty times as much carbon dioxide into the atmosphere as all of Earth industries. That means that humans are responsible for about one or two parts per hundred over its greenhouse effect.” 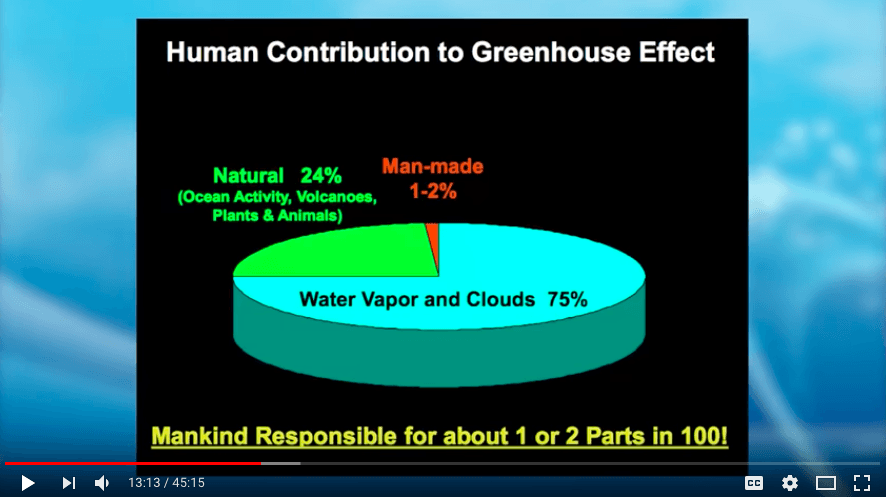 13’36: “If we completely eliminate all our emissions, we probably cannot measure the difference in global temperatures.”

14’10: “So it’s clear now we’re not seeing dangerous global warming, and the climate models are wrong.” 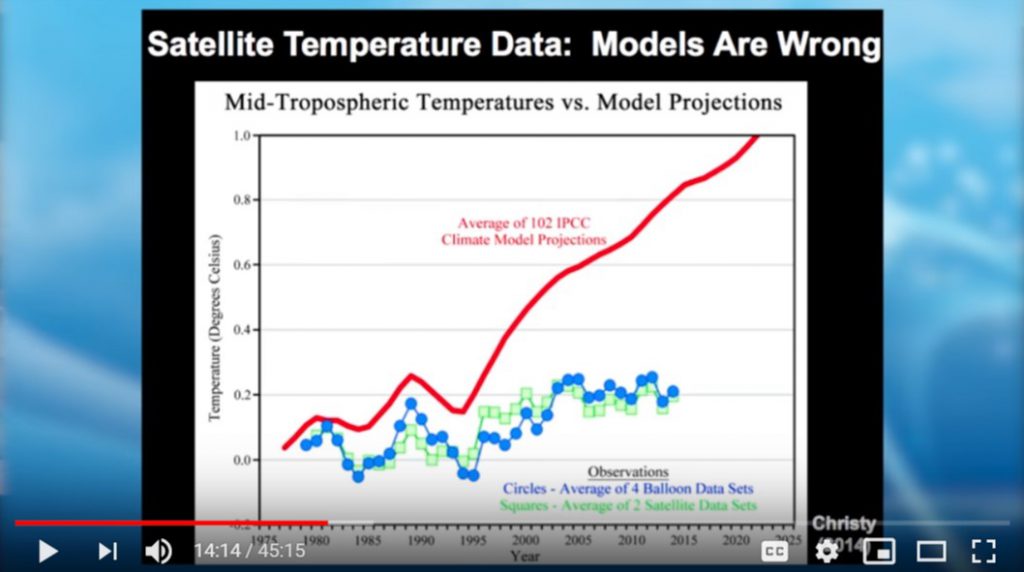 14’46: “If we double atmospheric carbon dioxide[…] we’d only raise global surface temperatures by about a degree Celsius.”

15’00: “All of the climate models make an assumption, they all assume a positive feedback from water vapor.”

15’50: “The idea that the much smaller carbon dioxide cycle is now controlling the water cycle is not very likely.” 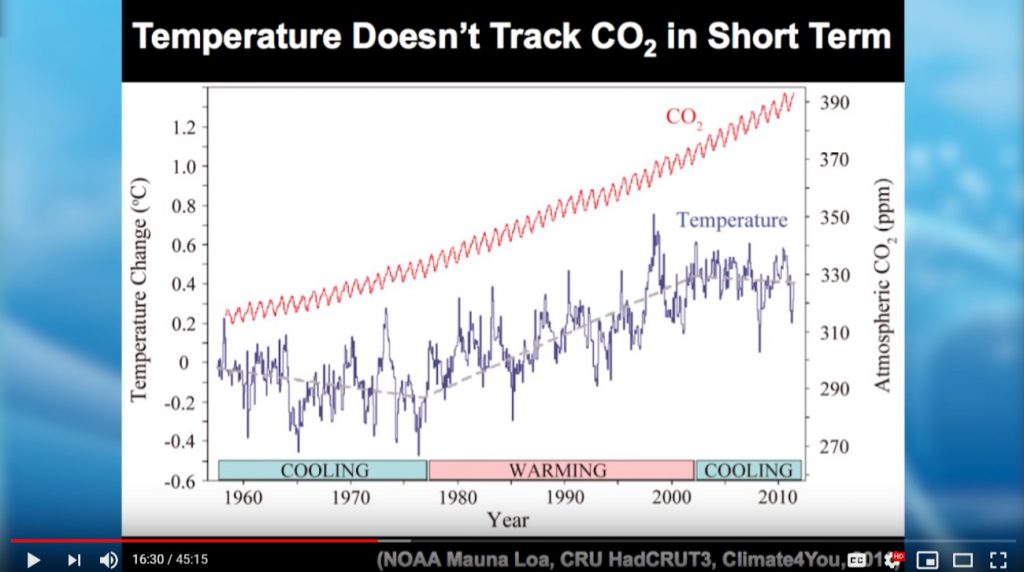 16’40: “[The] front cover of Time and Newsweek, and many professors were teaching that we had to prepare for the coming ice age.” 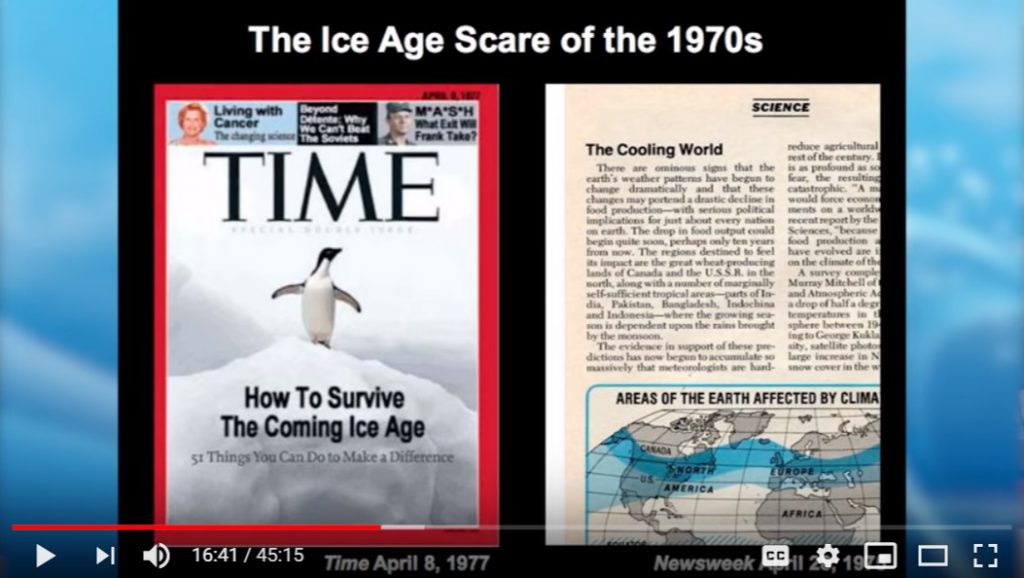 17’25: “So now we’re able to explain from natural factors how we’ve had the 20th Century warming. And it’s the combination of two factors: The first, we’re having a long-term, gentle temperature rise as we’ve emerged from the Little Ice Age[…] And then on top of that, we have the variations in temperature cycles of the oceans.”

20’00: “This is the third station at the South Pole, I’m sure some of you know what happened to the other two stations[…] They were buried by snow.”

22’25: “Greenland is melting a little bit at the edges and getting thicker in the center, but overall the ice is perfectly rock solid, very little change.”

22’40: “Ocean levels have been rising for the last 20,000 years[…] No climate scientist can tell you when natural sea level rise stopped and man-made sea level rise began.”

27’50: “If there is one compound we can put into the air that would be great for the environment, carbon dioxide is that compound.”

30’30: “So the bottom line of all this is that climate change is natural, not man-made. I don’t have a chance to go into a lot of the details, but it’s due to natural cycles of Earth that are probably driven by the Sun. Man-made greenhouse gases play only an insignificant role.”

42’50: “Climate scientists are telling us it’s likely we’re going to be in for a period of cooling. The two big ocean currents of the Pacific and Atlantic are moving into a cool phase[…] The Sun is very inactive now, which portends cooler temperatures.”