After Climate Feedback attached a fact-check rating to John Stossel’s recent video titled “Government Fueled Fires” on Facebook, Stossel published a second video claiming that our rating was inappropriate and unfair. Publishers that correct their content or believe their content was rated incorrectly are able to appeal that decision, in which case the fact-checking partner reviews the content again and privately responds accordingly. Because Stossel’s video publicly misrepresents our actions—and seeks to present scientists who contributed to our review as disagreeing with our actions—we would like to set the record straight.

Stossel complains that we should not have rated his post using a claim review of a quote that does not appear in his video. This is a misunderstanding of how fact-checking partners operate on Facebook. Given that many pieces of content posted on Facebook can separately make the same claim, it is not necessary to create a separate claim review article for each post we rate. It is, of course, necessary that the claim we reviewed is representative of the claim in each post we rate, which is true in this case. 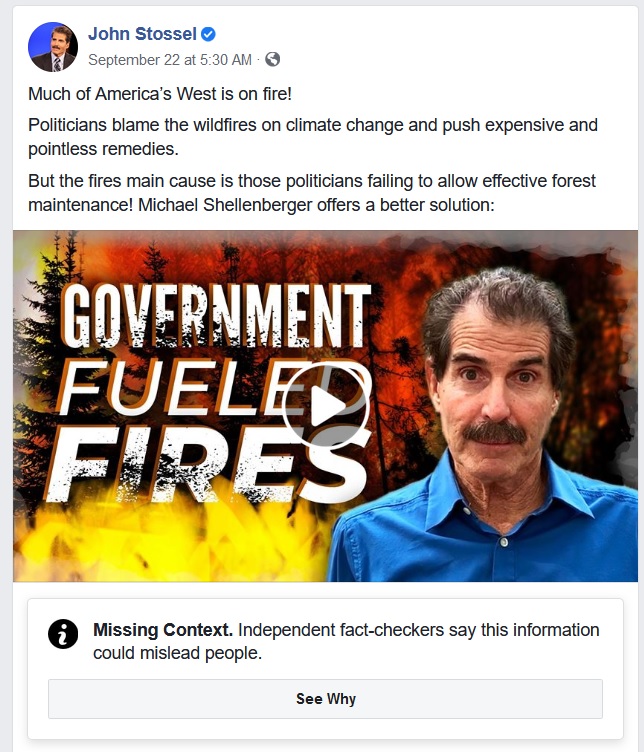 Our review was based on one specific formulation of a claim we saw frequently appearing amidst record-setting wildfires on the US West Coast: “Forest fires are caused by poor management. Not by climate change.” We relied on comments supplied by three scientists for a previous appearance of this exact claim by Michael Shellenberger—who was also the guest Stossel interviewed in his video. The scientists explained that this claim is misleading. For example, Daniel Swain wrote:

“This is misleading and incorrect as stated. While the legacy of 20th century forest management policies, as well as urban incursion into the wildlands, are indeed relevant in some areas, research has shown that such non-climate factors cannot account for the enormous increase in area burned by wildfire both in the broader American West and California specifically.

In fact, drying of vegetation due to climate change is responsible for about half of the observed increase in western U.S. forest fire area burned over the past several decades[1]. More specifically in California, observed warming and drying more than doubled the occurrence of extreme fire weather conditions between 1979 and 2018—a trend that is attributable to human-caused climate change[2].”

The same claim is made in Stossel’s video. In it, Stossel narrates, “[Michael Shellenberger] says it’s silly to blame the fires on climate change.” Later, he continues, “If not climate change, what is to blame? Foolish policies.”

“California has warmed three degrees over 50 years, but—” Stossel says, followed by a clip of Shellenberger, who states, “You could have had this warming and not had these fires.”

Stossel concludes the video with this line: “Bad policies were the biggest cause of this year’s fires, not the slightly warmer climate.”

We rated the video as “Missing Context” (not “False” or “Partly False”) because viewers did not receive an accurate explanation of the scientific research on the role of climate change in western US wildfires. A 2016 study[1], for example, found that “human-caused climate change caused over half of the documented increases in fuel aridity since the 1970s and doubled the cumulative forest fire area since 1984”.

The Stossel video accurately discusses the fact that 20th century fire suppression policies led to a greater accumulation of vegetation on the landscape, which has contributed to more intense wildfires. But the video also dismisses the contribution of climate change, which is not a position supported by scientific evidence and research.

John Stossel and his team were welcome to appeal our rating by contacting us following Facebook’s guidelines. But instead, his team initially contacted one of us and several of the scientists who reviewed this claim to request an interview for a new video. (They later reached out to appeal, and we responded to explain the rating after reviewing the video again.)

The two scientists they interviewed are not involved in our rating of Facebook content, including this video. We invite scientists to comment on the scientific credibility of statements or articles and use their comments to build our reviews, but applying those reviews to Facebook content is our job. This means the scientists were not previously familiar with Stossel’s video or the specific rating we had applied to it. During their interviews, the scientists were pressed for judgments on whether the rating we applied was appropriate. Clips from these interviews were then used in Stossel’s new video to attempt to discredit our rating.

However, both Zeke Hausfather and Stefan Doerr subsequently discussed the video with us and both agree the rating was appropriate—a fact that Stossel noted in his video.

In an email to Stossel’s team, Hausfather wrote:

“While the video does mention that climate change plays a role, it emphasizes that poor forest management is the primary cause of increased wildfire activity that we are seeing and minimizes the role of climate. This is at odds with the majority of wildfire scientists, who suggest that both are major factors in driving the changes we are seeing—as I told John in the interview.

[…]While I do not think that a false or partly false rating would be appropriate here, I do think that the missing context that Climate Feedback gave the piece is appropriate given its reliance on a single individual (Shellenberger) who is not an expert in the subject and whose views are at odds with the majority of the scientific community.“

“Whilst the original fact check was indeed not carried out on the video you produced, it was carried out on the claim that ‘Forest fires are caused by poor management. Not by climate change.’ Your video implies the same (you explicitly state that ‘their policies were the biggest cause of this year’s fires, not climate change’). This is fundamentally the same message that we collectively fact checked and which is misleading by misrepresenting a complex reality. On that basis I do find the flag on your post on Facebook entirely appropriate to alert the reader that context is missing.“

Contrary to Stossel’s claims, we rated his post using the appropriate process and based on the claims presented in his video. Climate Feedback works carefully to ensure that content is evaluated objectively. Our mission is to effectively inform audiences about the scientific credibility of the claims they encounter, including claims about climate’s relationship to wildfire trends.