CLAIM
“Forest fires are caused by poor management. Not by climate change.”
VERDICT more about the rating framework

DETAILS
Misrepresents a complex reality: The causes and behaviors of wildfires in the western US are influenced by a variety of factors, including weather conditions, climate change, past fire suppression practices, and an increase in the number of people living near wildlands.
Incorrect: Scientific studies demonstrate clear links between climate change, hotter and drier conditions, and an increase in dry vegetative fuel load, drastically increasing the amount of forest fire area in the western US.
KEY TAKE AWAY

In addition to land management practices, the severity of wildfires in the western US is influenced by extreme heat, drought, and the amount of dry vegetative fuel, which are all linked to human-caused climate change. Climate change is not the only factor that affects fire behavior, but it is an important one. Since 1984, the forest fire area in the western US likely doubled due to climate change.

CLAIM: “Forest fires are caused by poor management. Not by climate change. While fire behavior is affected by weather and climate...fires around the state of California do not happen because of climate change; they are caused because of an unsustainable fuel load and failed environmental practices.”

The claim that the forest fires currently burning in the western United States are caused by poor forest management and not climate change appeared in multiple Facebook posts published in September 2020. While forest management practices, specifically fire suppression, have increased the fuel load, scientific evidence also links climate change to hotter and drier conditions, which increase the amount of dry vegetative fuel and the total area burned in the western US[1].

Forest management efforts like thinning and prescribed burns are important to restore forests to the lighter fuel loads that existed before the fire suppression policies of the 20th century, says Valerie Trouet, an associate professor at the University of Arizona. But climate change is also a key contributor to fire severity today. As described in Abatzoglou and Williams (2016), “human-caused climate change caused over half of the documented increases in fuel aridity since the 1970s and doubled the cumulative forest fire area since 1984” (see figure below)[1]. 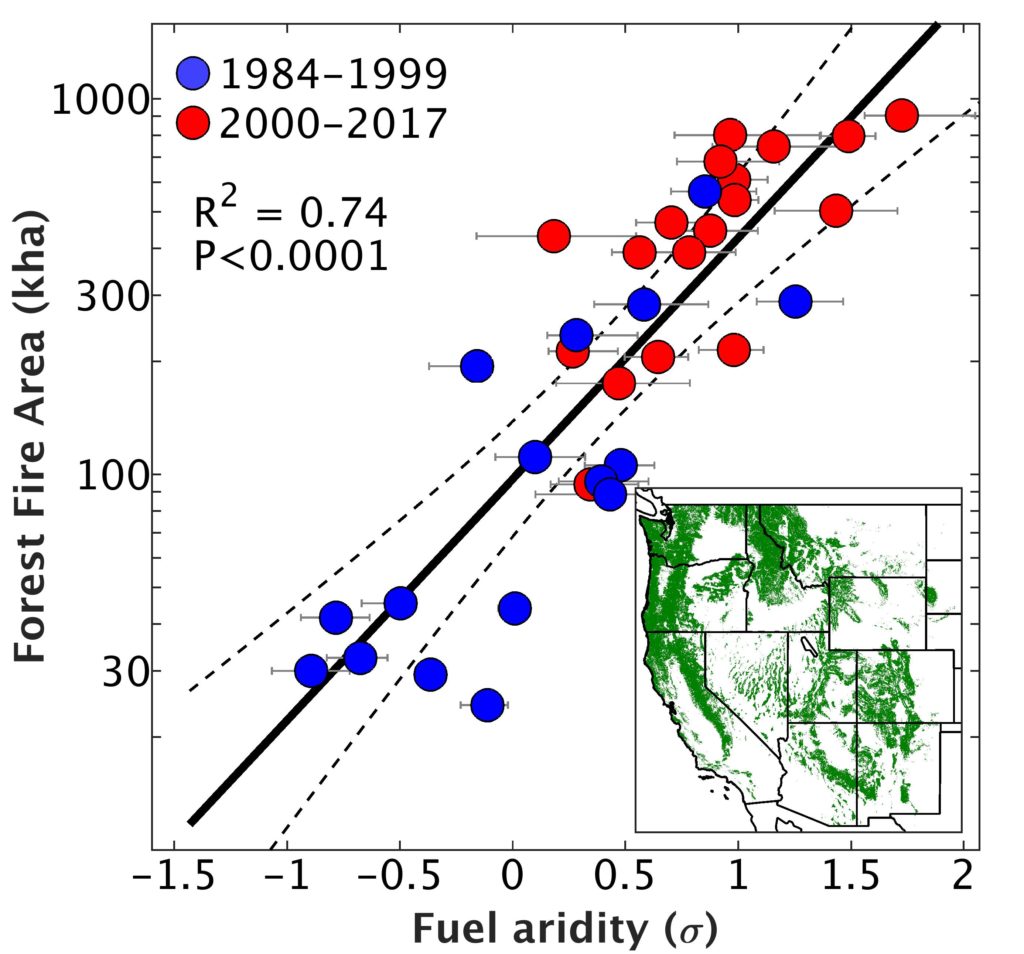 Several states in the western US, including California, Oregon, and Washington, are currently experiencing extreme drought (see figure below). 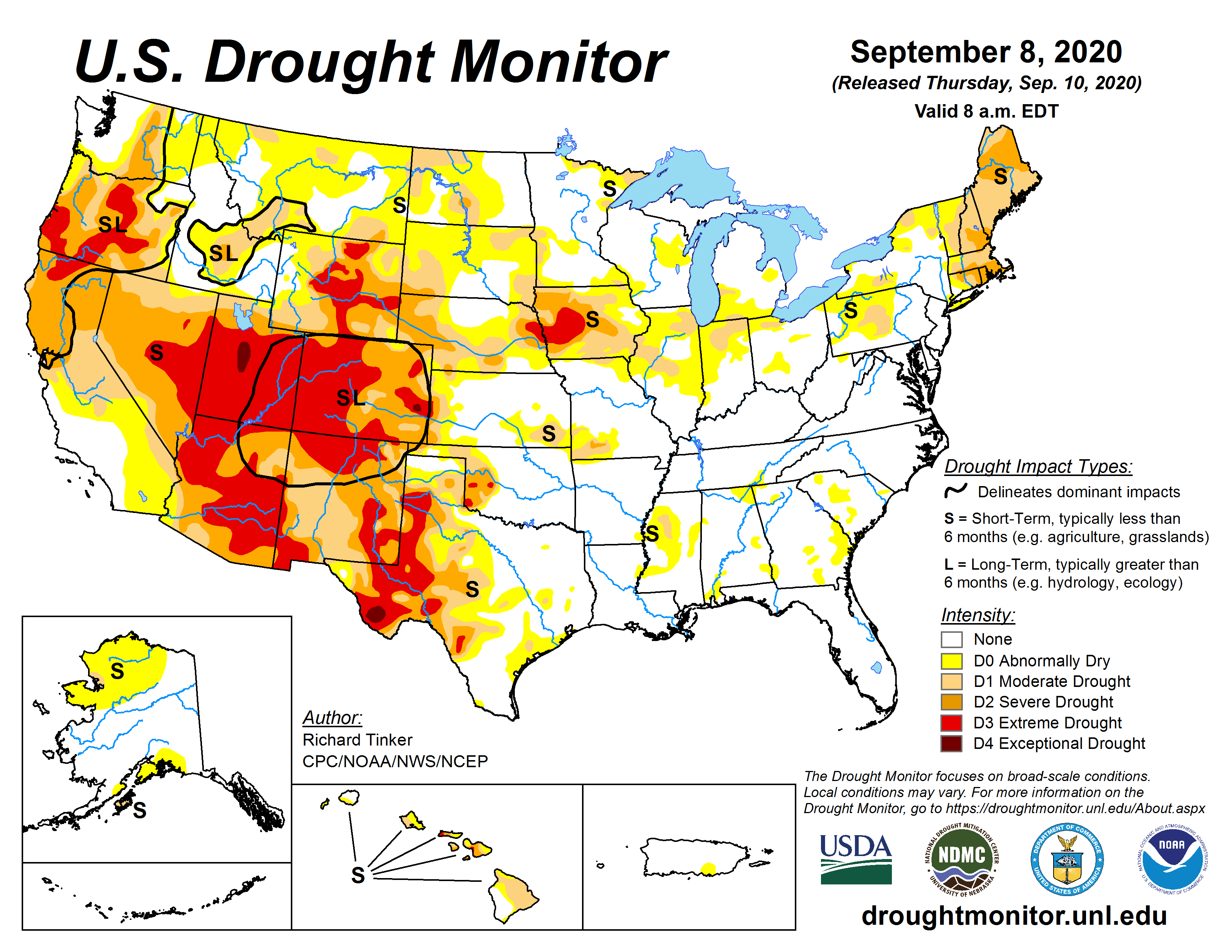 August was also the hottest month on record for California. These conditions, combined with strong winds, increased the severity of the current wildfires.

In addition to climate and weather, factors such as past fire suppression (causing fuel accumulation over time) and people living in closer proximity to wildlands also influence wildfire behavior, as described by the reviewers below. For a more in-depth discussion of how climate change influences wildfires in California, see our 2018 post: A discussion with experts on California wildfire links to climate change.

UPDATE (8 October 2020): Stossel TV claimed this review was inappropriately used to apply a “Missing Context” flag to their video on Facebook. This claim is based on a misrepresentation of our process, and of the assessments of the scientists who contributed to this review. For an explanation of how we rated their video, read our post published here.

Zeke Hausfather, Director of Climate and Energy, The Breakthrough Institute:
[Comment from a previous evaluation of a similar claim]

[The] claims that climate plays no role in natural disasters and wildfires fly in the face of a large peer-reviewed scientific literature showing clear links between climate change and extreme heat events, drought, and extreme rainfall as well as links between hotter and drier conditions and wildfire areas burned in many regions of the world[2-5].

All three factors – buildup of vegetation due to fire suppression, more people living in the wildland-urban interface, and hotter and drier conditions have contributed to severe wildfires in regions like the western US in recent years.

A 2016 study showed that climate change is responsible for over half the increase in fuel aridity (drier fuel load), and has doubled the cumulative forest area burned[1]. Rising average global temperatures have led to higher spring and summer temperatures, which in turn have led to earlier spring snowmelt. Further, there is evidence that climate change is causing winter rains to come later in autumn, and stop earlier in spring[6,7]. This is extending the area and time periods in which forests become combustible, and in parts of California, fire season is now 50 days longer than in 1979[8,9]. 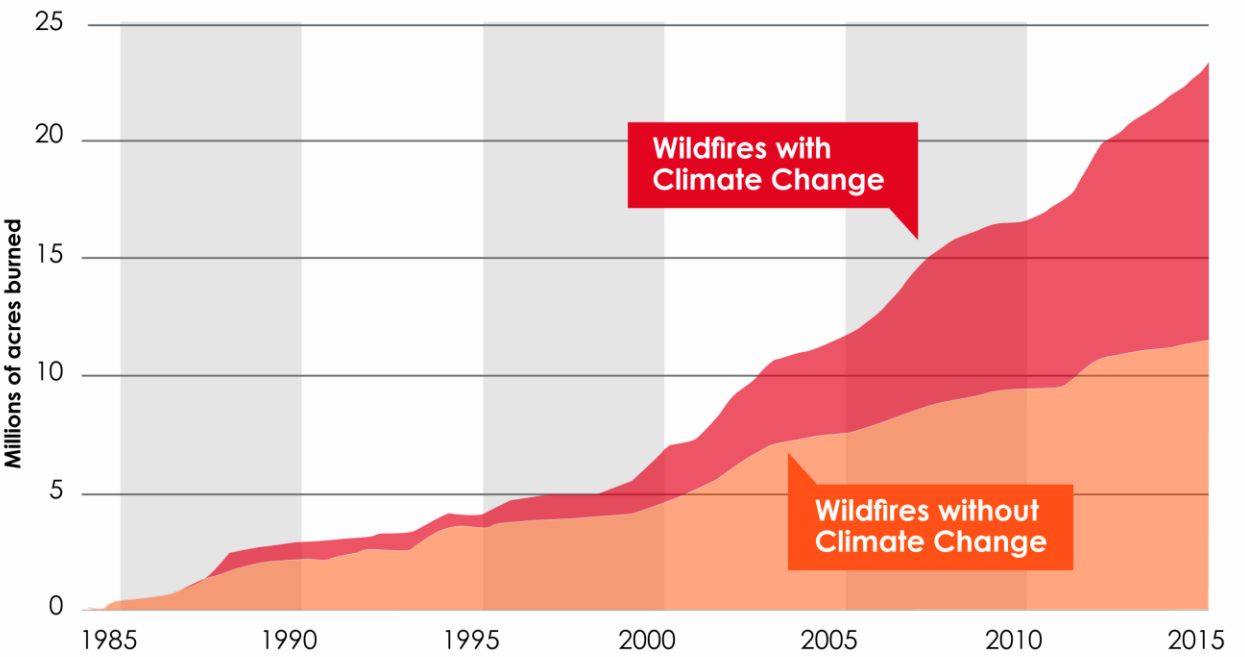 Several global climate trends promote fire: increased temperature, frequency, intensity and/or extent of heatwaves, droughts and extreme winds. This is very well established and summarised in the IPCC (2014) report[2,3].Climate change has led to an increase in area burned in regions where fires burn more intensely and have a greater impact (e.g. western USA and Canada)[1,10].

This is misleading and incorrect as stated. While the legacy of 20th century forest management policies, as well as urban incursion into the wildlands, are indeed relevant in some areas, research has shown that such non-climate factors cannot account for the enormous increase in area burned by wildfire both in the broader American West and California specifically.

In fact, drying of vegetation due to climate change is responsible for about half of the observed increase in western U.S. forest fire area burned over the past several decades[1]. More specifically in California, observed warming and drying more than doubled the occurrence of extreme fire weather conditions between 1979 and 2018—a trend that is attributable to human-caused climate change[10].