During our crowdfunding campaign, we are asking our backers which media sources they would most like scientists to check for accuracy in reporting on climate change.

Out of more than 300 backers, here is what they told us so far.

The Top 10 news outlets our backers want scientists to pay special attention to: 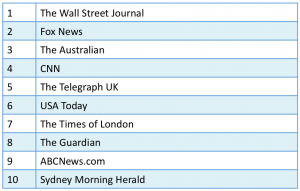 We are still taking votes and will release more details at the end of the campaign.

The primary area people want us to focus on is news media, specifically online outlets and TV channels. However, we have also received requests to evaluate the scientific credibility of public figures, mainly in the United States and Australia.

While the most mentioned Australian public figures include journalists and radio broadcasters, like Andrew Bolt, Miranda Devine and Alan Jones, the most cited  American public figures who people want us examine are politicians such as Texas Congressman Lamar Smith, North Carolina Governor Pat McCrory and the presumptive Republican presidential nominee, Donald Trump.

Should scientists evaluate statements made by politicians?

We have asked our supporters if they also want scientists to evaluate the accuracy of climate statements made by politicians. The first results: an overwhelming 93% of respondents said ‘yes’. 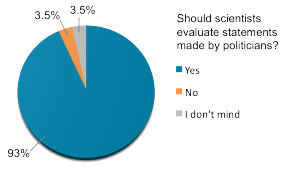 Here are just a few of the reasons why our supporters think scientists should check politicians:

“Politicians shape public perception. They should be held to high standards.”

“People need to know whether politicians are making decisions based on sound science.”

“Sometimes what politicians say gets a wider audience than any single newspaper or TV channel.”

“Thank you. This is a really powerful approach. Keep up the good work.”

“Love that this effort is “sunlighting” the best climate coverage.”

“Thanks for organizing this educational initiative and for creating a reliable hub of scientific critique on climate news articles and sources!”

“Getting to the point where you can rate and rank different outlets and particular writers would be great. It would be great to have dynamic rankings so that writers and news sources know that if they improve their coverage of climate science they can improve their relative rankings–to provide an incentive system to be better.”

Though our backers are from dozens of different countries, they are highly concerned about the credibility of climate change reporting in the U.S., Australia, U.K. and Canada.

People want scientists to concentrate their efforts on monitoring news outlets with the widest audiences in these countries.

It is still possible to vote for the media source of your choice. You will see all the results when we reveal the top sources our backers requested at the end of the campaign!

If you want to help scientists claim a voice of their own in online climate coverage, please take a few minutes to donate to our crowdfunding campaign today!