Climate Feedback used as a trusted reference by: 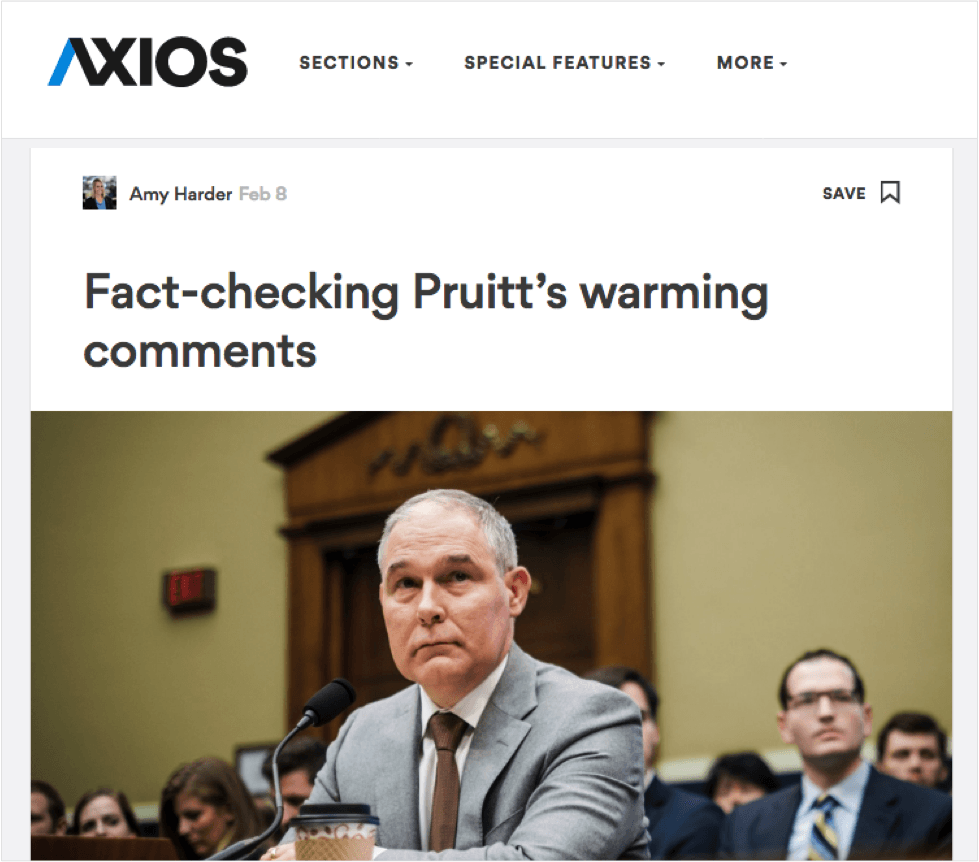 “Go deeper: Climate scientists roundly refuted with very detailed responses an article in May 2016 that said in “many ways global warming will be a good thing.” 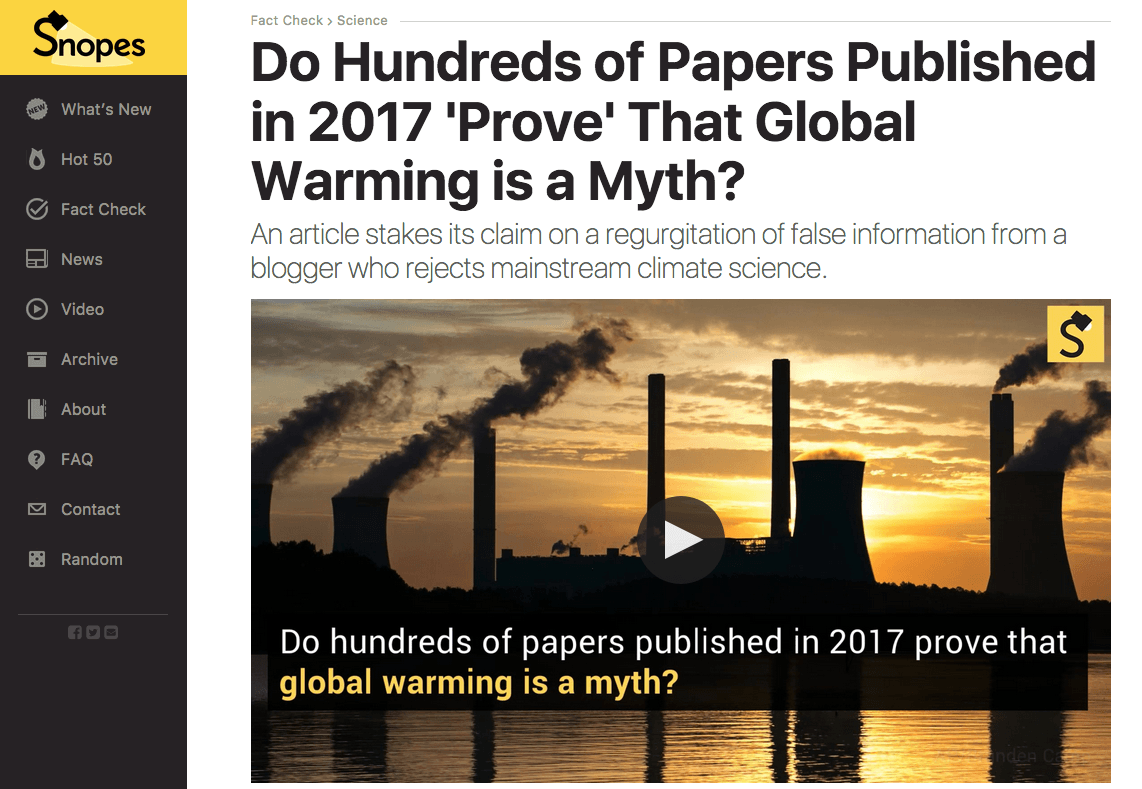 Do Hundreds of Papers Published in 2017 ‘Prove’ That Global Warming is a Myth?

“The first time that Breitbart ran a NTZ based-story, numerous scientists listed in the report pointed out their their graphs had been digitally altered by NTZ to omit data, and that NTZ had either misinterpreted their papers or read them so superficially that the author of the post did not realize he was sometimes quoting from general background material and not the actual findings of the papers themselves. […] Ernesto Tejedor Vargas, whose study “Temperature Variability in the Iberian Range Since 1602 Inferred from Tree-ring Records” was featured in both the June Breitbart article and in the current iteration, told Climate Feedback in June that he “would like the author of the No Tricks Zone post to remove my name from the blog since it is not reflecting our research conclusion”” 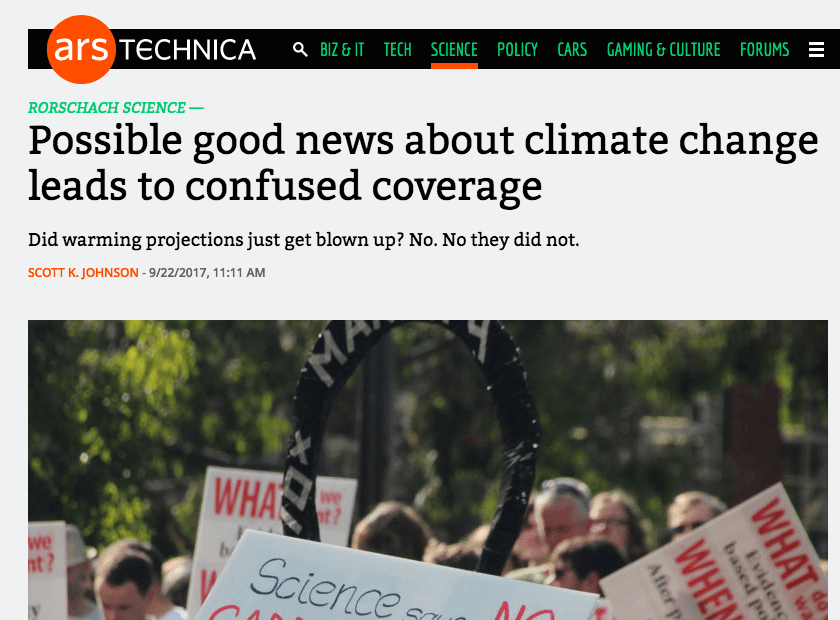 “Here is where some coverage of the story diverged from the facts of the study. Some interpreted this to mean that climate models have overestimated global warming because they were too sensitive to changes in greenhouse gases. […] In reality, those model projections have done an admirable job of matching the observed rise of global temperatures in recent years.” 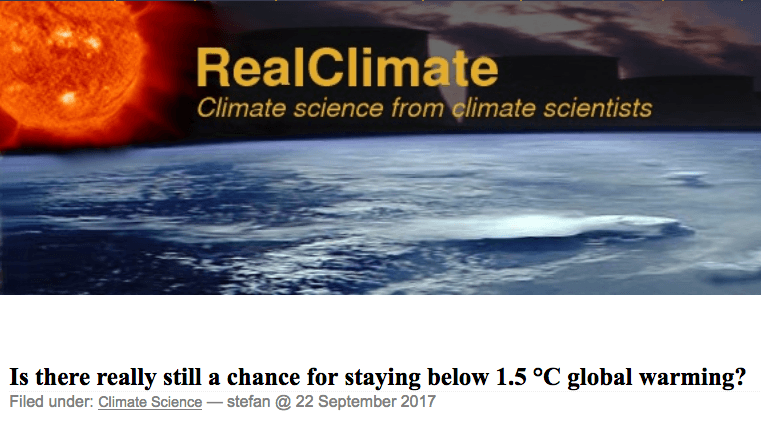 Is there really still a chance for staying below 1.5 °C global warming?

“We’ve seen a bizarre […] misreporting about Millar et al., focusing on the claim that climate models have supposedly overestimated global warming. Carbon Brief and Climate Feedback both have good pieces up debunking this claim, so I won’t delve into it much. “ 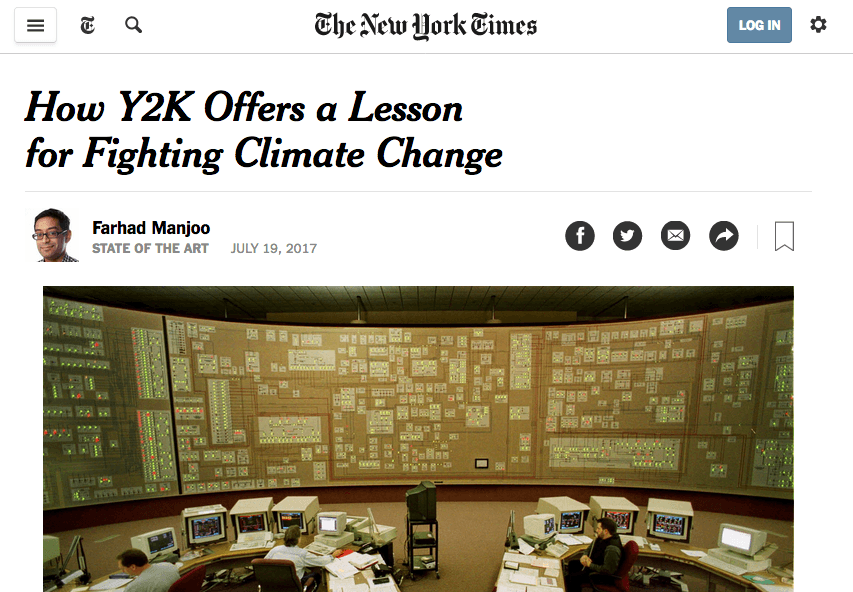 How Y2K Offers a Lesson for Fighting Climate Change

“Last week, New York magazine published a riveting and frightening look at the future of the planet we call home.[…] The article captured the public’s attention, quickly becoming the most-read piece in the magazine’s history. But many critics, including several climate scientists, argued that it was flawed because Mr. Wallace-Wells focused on the worst-case scenario, a pessimist’s take. Why feed the public a too-bleak picture of the future? Why frighten people into action, rather than inspire them?” 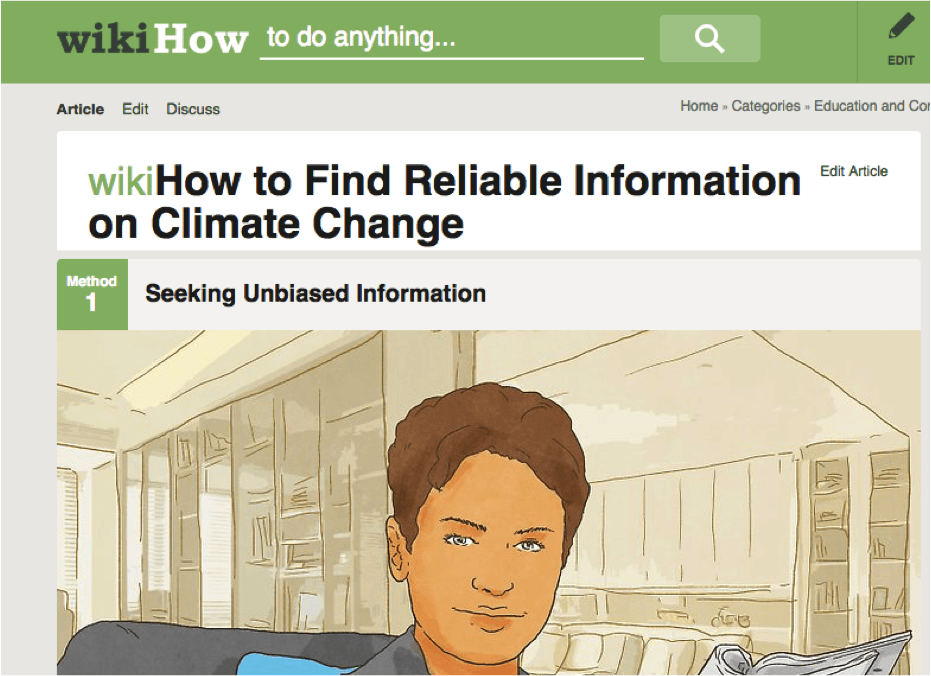 How to Find Reliable Information on Climate Change

“Many different industries and companies are affected by the public facts and opinions on climate change. You may notice articles that seem to be very pointed in one direction or the other. In this case, it is best to find other information, or at least to make an effort to find information supporting the statements made by the article.” 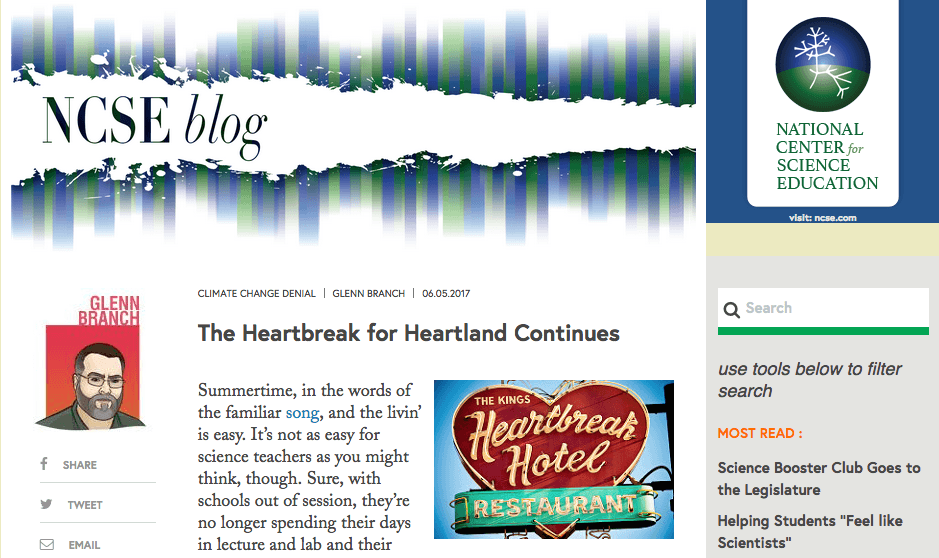 The Heartbreak for Heartland Continues

“diligent science teachers are updating their curricula and lesson plans, participating in professional development, and catching up on the latest science. Unfortunately, the Heartland Institute is continuing to inflict its climate change denial literature on science teachers across the country. […] Climate Feedback, a network of scientists who collectively assess the credibility of climate change coverage, published a detailed assessment of the Heartland material on May 31, 2017. […] “Scientists found that almost all the claims that made it to the ‘Key Findings’ section are incorrect, misleading, based on flawed logic, or simply factually inaccurate.”” 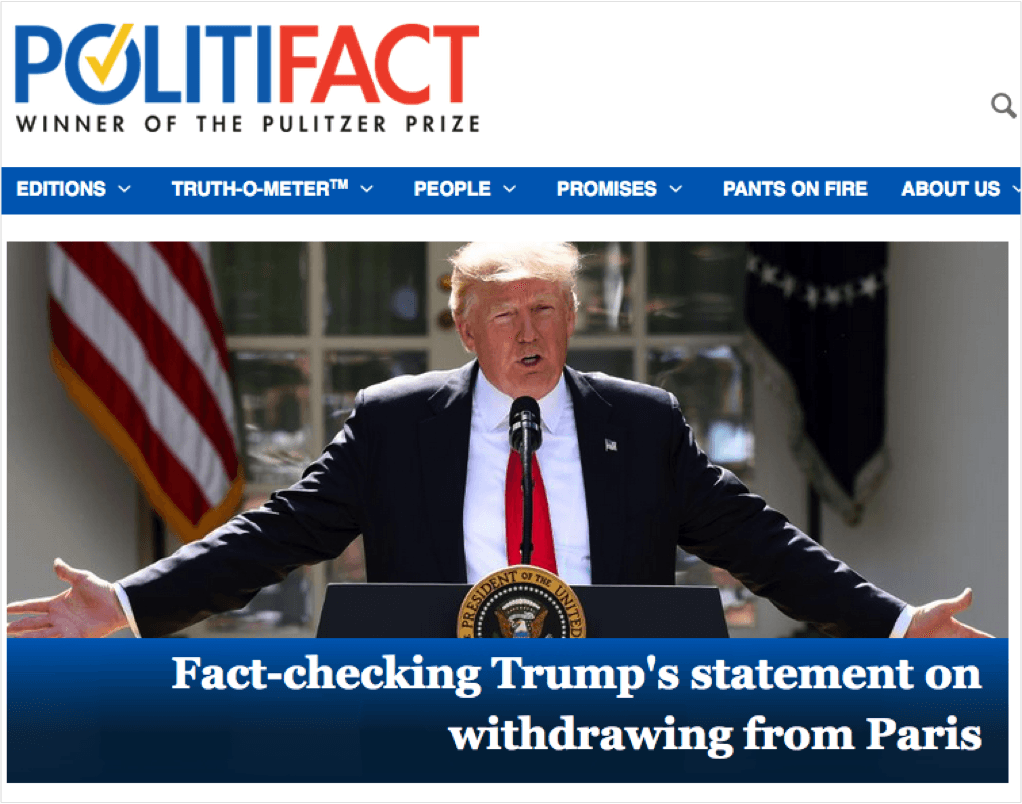 “Trump cited a number of negative statistics about the predicted economic impact from the climate deal […] All of these statistics come from a March 2017 study, prepared by NERA Economic Consulting, that estimates the potential impact of hypothetical regulatory actions necessary to meet the goals of the Paris Agreement. The study makes assumptions that gave several economics and environmental professors pause when reacting to the NERA study for ClimateFeedback.org.” 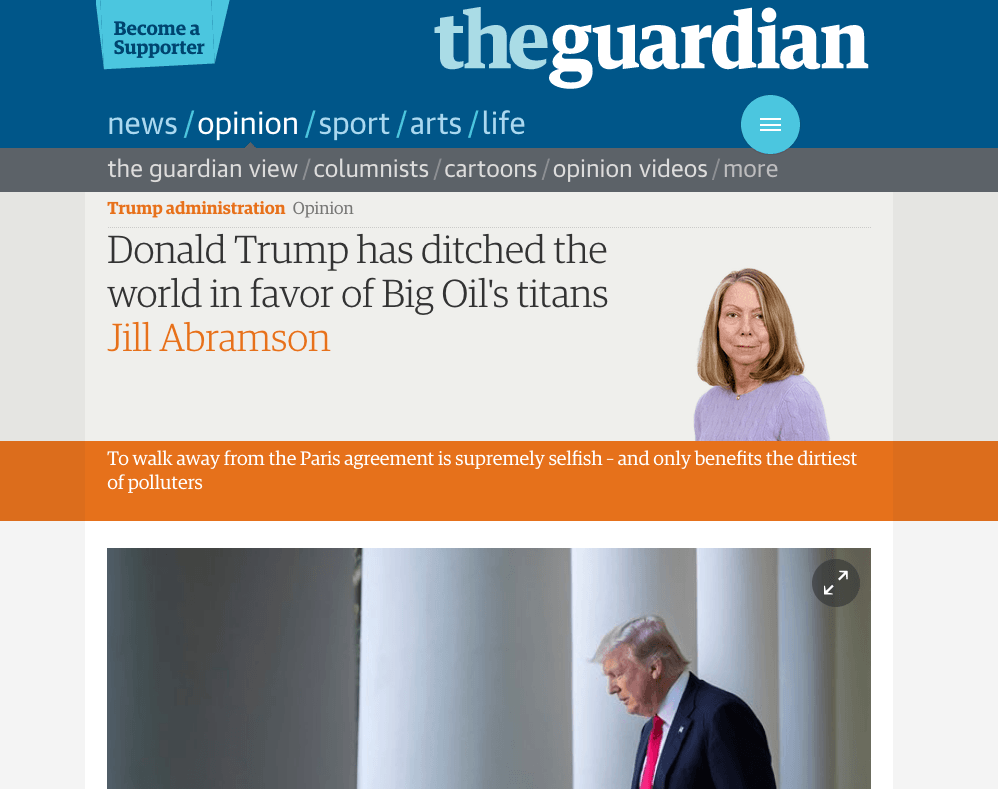 “In his remarks, Mr Trump listed sectors of the United States economy that would suffer lost revenues and jobs if the country remained part of the accord. But the only evidence he used is a study that has been roundly disputed by credible environmental experts.” 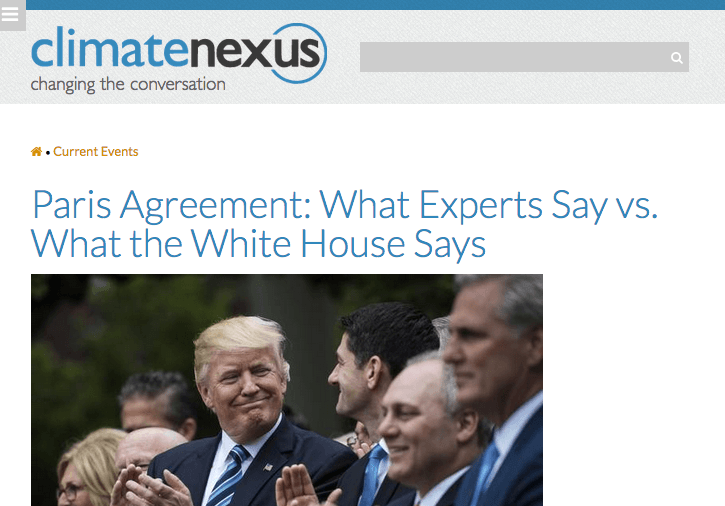 Paris Agreement: What Experts Say vs. What the White House Says

“The NERA study cited by the President is wrong. They assume we’ll take the LEAST efficient path to decarbonization, and that innovation in cleantech will slow down, instead of speed up. If it’s going to kill jobs and cost money, why are businesses so uniformly supportive? (One debunking by WRI, and another by economist Gary Yohe, and similar arguments rebutted by a variety of scientists)” “This past November, Rose tried to blame the record-shattering hot global temperatures of 2016 on El Niño in a piece that the climate scientists at Climate Feedback gave a “very low” scientific credibility score of -1.9. The lowest possible score is -2.0. The scientists described Rose’s article as “incredibly misleading,” “flawed to perfection,” “deceptive,” and “completely bogus.” One expressed dismay that they couldn’t rate its credibility worse than “very low.”” “What we should do […] Gather the views of independent experts. A very useful initiative in this regard is Climate Feedback, which solicits and publishes comments from a whole range of scientists about media articles on climate.” 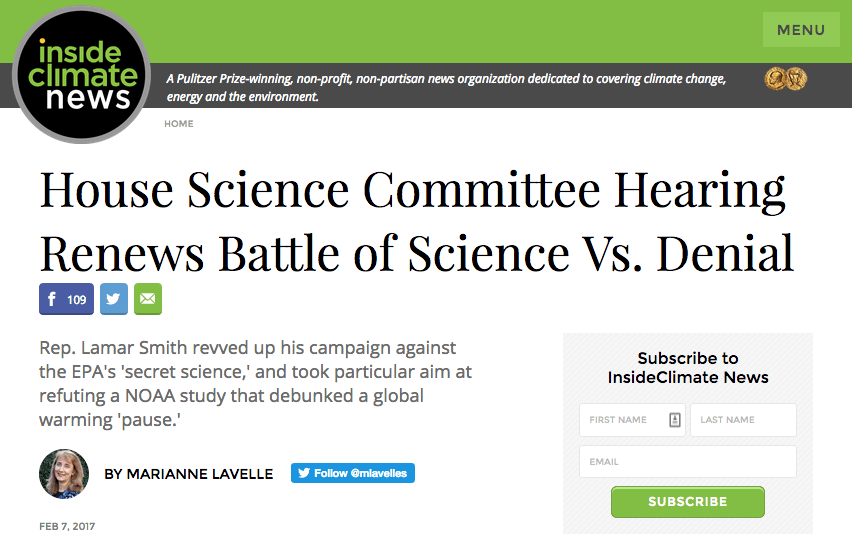 “The article, written by David Rose, has been roundly criticized by climate scientists, diplomats, and others, who have pointed out a number of flaws and errors.” “The author of the Mail on Sunday news article, David Rose, has a history of publishing sensationalized articles that respected scientists have found to be false and misleading.” “British journalist David Rose, […] has reported inaccurately on climate science and Iraqi weaponry in the past,” “David Rose, who has a history of scientifically inaccurate reporting, portrayed this flawed procedural complaint as proof of scandal and dubbed it “Climategate 2”.”

“Climate scientists, in turn, have been highly critical — a band of them just extensively challenged the original Mail on Sunday article at the website Climate Feedback, where they “estimated its overall scientific credibility to be ‘very low.’” “The article is a prime example of cherry picking: pulling a single item out of context in order to build a misleading case.” Should we make peace with CO2?

“Last week, Rodney Nichols and Harrison Schmitt published an op-ed in The Wall Street Journal protesting what they call the “phony war against CO2.” The authors are the co-founders of the CO2 Coalition, a group established to publicize the positive benefits of CO2. Our friends over at Climate Feedback assembled a group of 6 scientists to examine their claims.” MMFA published a study on how The Wall Street Journal, USA Today, The New York Times and The Washington Post featured Climate Science in their opinion pages, building on several Climate Feedback analyses. “The website Climate Feedback, in which leading climate scientists review the credibility of articles published in the media, examined a story in the Independent trumpeting Beckwith’s “unprecedented” claim. It gave the story a “low” credibility score and concluded: “In reality, such wind features are frequently observed and the central claim of the article is thus unsupported by science.”” The Partnership for Responsible Growth

series of 12 ads in The Wall Street Journal

This summer, the Partnership for Responsible Growth ran a series of 12 ads in The Wall Street Journal asking for more accurate climate science coverage in their opinion pages. The ad series is based on a report by Climate Nexus “How The Wall Street Journal Opinion Section Presents Climate Change”, which grounds its investigation on Climate Feedback analyses, among other resources.

“Are these realities any surprise when we see headlines such as “Planet is not overheating, says professor” and “Scientists ‘are exaggerating carbon threat to marine life’” in the UK’s national media? It was the former article that recently prompted a number of members of the House of Lords, including me, to write a letter to the editor of The Times, John Witherow. We highlighted the newspaper’s recent record of tendentious and misleading coverage of climate science” Members of the House of Lords

Members of the House of Lords have written to the editor of the Times to demand more accurate coverage of climate science. In their letter they use as a reference Climate Feedback’s latest analysis of the Times’ article “Scientists ‘are exaggerating carbon threat to marine life”. The story has been covered by The Guardian and ABC News. “I suggest you read what actual climate scientists have to say about Taylor’s claims, because you’ll see words and phrases like “total fabrication” and “very misleading” and “disingenuous” and “inaccurate” and “wild misrepresentation.””