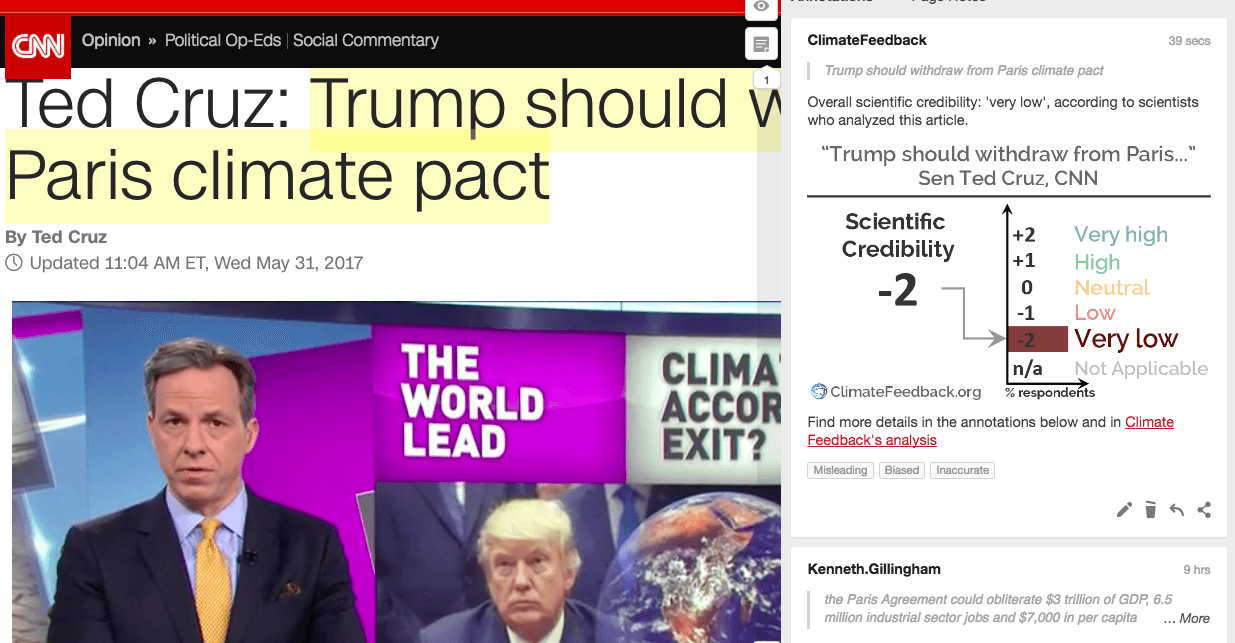 In an op-ed published by CNN, US Senator Ted Cruz (R-TX) argues for a US withdrawal from the Paris Agreement, an international agreement with the goal of reducing greenhouse gas emissions to limit global warming. Sen. Cruz’s argument is based on claims about the climate impact of cutting greenhouse gas emissions (which he says is limited) and the economic impacts of emissions reductions (which he says are dramatic).

We asked researchers to evaluate whether these claims reflected the scientific state of knowledge on these topics. The reviewers indicated that Sen. Cruz’s article cites a single report that assessed only the costs of climate actions, relying on a series of assumptions that maximized those estimated costs, and that excluded the benefits of avoided climate change and of renewable sources of energy.

Frank Vöhringer, Dr. rer. pol, Scientist, Ecole Polytechnique Fédérale de Lausanne (EPFL):
This article is a statement of opinion which uses information and pseudo-information in a biased and misleading way. For example, the economic consequences of the Paris Agreement for the USA are hugely exaggerated.

Gary Yohe, Professor of Economics and Environmental Studies, Wesleyan University:
The claims that the Paris Accord would only produce negligible benefits is just wrong—it is the start of an iterative response that minimizes the cost of meeting any long term goal like a 2 °C target. The jobs lost claim is just hyperbole and misdirection (e.g. the demand side is costing coal jobs—a trend that started before Obama became President and that will not be reversed by Presidential Orders that open more supply). Moreover, it ignores jobs created in alternative energy design, installation, and maintenance.

1. The United States’ pledged emissions reductions were one portion of the global actions that would significantly limit the magnitude of future warming.

“This, all while doing nothing to meaningfully decrease global temperatures.”

Gary Yohe, Professor of Economics and Environmental Studies, Wesleyan University:
[Comment taken from an evaluation of similar statements.]
The statement about the climate impact of the Paris Agreement is incorrect. The figure below, appropriated from Fawcett et al (2015)*, displays the nuances of correctly projecting the impact of the Paris Accord through 2100. Business as usual creates an emission trajectory that rapidly passes by 80 gigatons of CO2 per year by 2070; the likelihood of seeing warming less than 3 °C through 2100 along this path is 10% with a median of more than 4 °C. Abiding by the Paris Accord through 2030 and continuing its momentum through 2100 would increase that likelihood to nearly 60% with a median somewhere around 2.5 °C – a reduction of approximately 1.5 °C and not 0.2 °C.

Figure — Ranges of emissions scenarios with and without the Paris Accord through 2030 and beyond. The bars on the right indicate distributions of warming through 2100, and the trajectories show a no policy case as well as a modest policy, the Paris Accord extended, and an accelerated policy case. Source: Fawcett (2015)

Valentina Bosetti, Professor, Bocconi University:
The Paris Climate Agreement alone will not solve the climate change problem (meaning we need even more action, not less). It puts us on the right track, though.
See the Climate Action Tracker website for details. 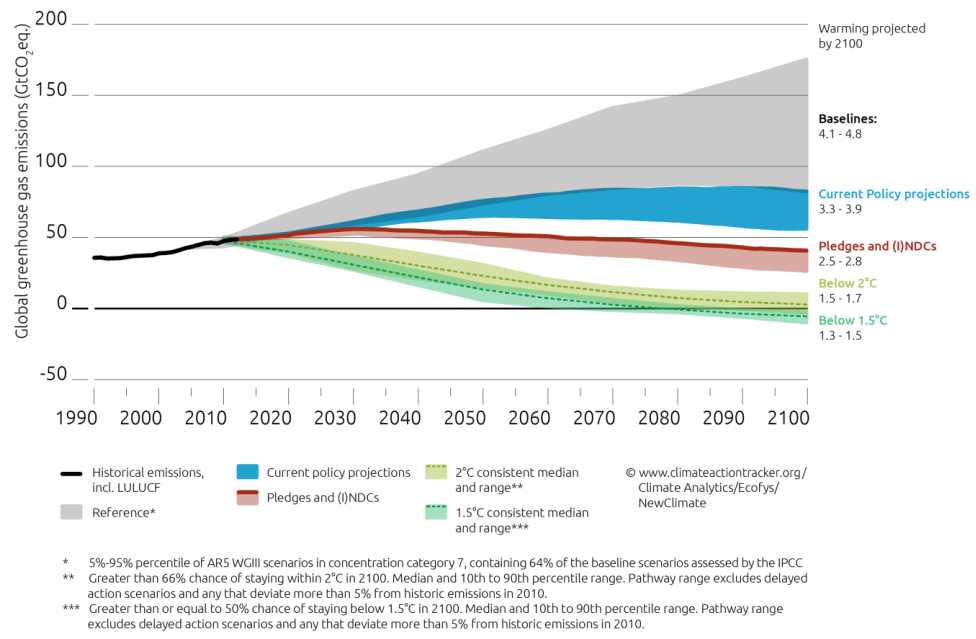 2. Research shows that reducing greenhouse gas emissions does not have to result in economic harm. And importantly, the impacts of climate change come with significant costs of their own.

“According to a recent National Economic Research Associates Economic Consulting study, the Paris Agreement could obliterate $3 trillion of GDP, 6.5 million industrial sector jobs and $7,000 in per capita household income from the American economy by 2040. Meeting the 2025 emissions reduction target alone could subtract $250 billion from our GDP and eliminate 2.7 million jobs. The cement, iron and steel, and petroleum refining industries could see their production cut by 21% 19%, and 11% respectively.”

Kenneth Gillingham, Associate Professor, Yale University:
It is true that this is what the NERA study says, with many caveats. However, this statement is misleading and taken out of context. There are three reasons for this.

First, and most importantly, the NERA study looked at the costs of a hypothetical set of policy actions. These may not be the actions that will be taken to comply with the Paris Agreement. One could easily model other actions with much lower costs.
Second, it is only the costs that are modeled. The benefits from avoiding climate change (sea level rise, greater storm surges, greater spread of diseases, etc.) are entirely ignored. The net costs from the policies would be entirely different and likely even positive.

Third, there is some cherry-picking going on here. The NERA model is known to be inflexible in how it allows for innovation to influence economic activity, and thus it tends to provide much higher cost estimates than other well-known models such as the U.S. Department of Energy’s NEMS or ICF Consulting’s IPM. The NERA model provides useful information, but it is important for it to be taken in context of model results from other models and not cherry-picked as was done here.

Valentina Bosetti, Professor, Bocconi University:
The claim on jobs lost is totally unsubstantiated by any scientific assessment. Depending on HOW we decide to decarbonize, the effect on jobs could be either positive or negative. In general, the large investments in infrastructure required might increase jobs. This is not accounting for the totally unrelated reduction in jobs that will be most likely materialize due to robots*.

Gary Yohe, Professor of Economics and Environmental Studies, Wesleyan University:
[Comment taken from an evaluation of similar statements.]
The numbers he quotes are from an analysis that adds new meaning to the term “business as usual”. They look to frame their vision of the future on the basis of static behavior across major sectors of the economy; i.e., they do not allow their sectors to adapt their business operations in response to changes in their economic environment. This allows the analysis to report prices for carbon that vary by orders of magnitude across 4 major sectors and leads them to expecting investment to fall by nearly 20% at a time when increasing investment in alternative energy and new production technologies would allow them to grow their profits and support more jobs. The reported losses in jobs, GDP, and personal income are the result of these rigid assumptions and not their similarly rigid depictions of how the US would implement its plan to meet its Paris Accord target.

Rather than quote a different report from a different set of experts that show economic growth in both GDP and employment (though they exist, doing so would fall into the same ordering trap as the Senator), let’s look at the recent experience in the United States. The first figure below shows that US carbon emissions have fallen by 14% since 2006, a period of time during which the unemployment rate also fell from nearly 9% to around 4.4% and the annual rate of GDP growth climbed to the historically normal range of 1.5% to 2%.

The second figure shows emissions falling in California by nearly 8% since 2008 partly in response to a cap and trade program that has generated $4billion in revenue—revenue that has been used to support investment in adaptation and simultaneous expansion of the employment of less carbon intensive and/or carbon free sources of energy at scale. Over the same period, California GDP has climbed by nearly 10%. These simple economic observations contradict the Senator’s claims. 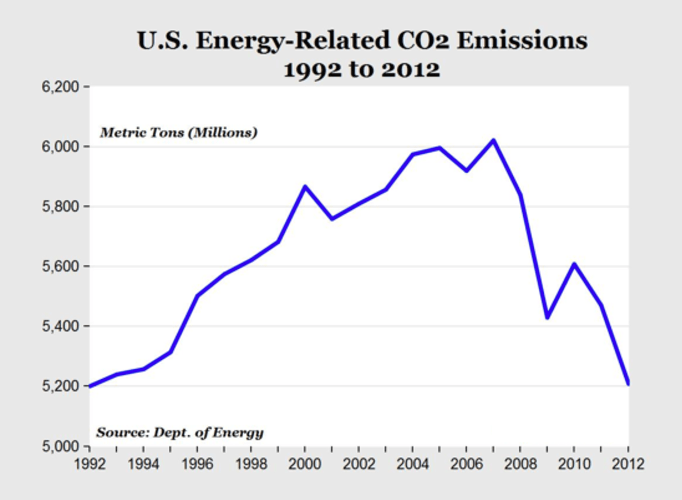 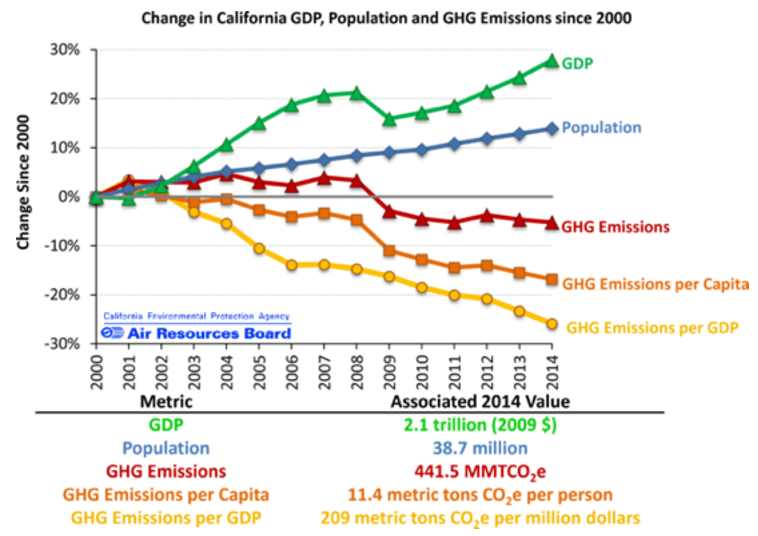 Bob Ward, Policy and Communications Director, London School of Economics and Political Science:
The National Economic Research Associates study assumes that the United States meets the 2025 target for reducing annual emissions of greenhouse gases, which is set out in its “nationally determined contribution”, and goes on to reduce its annual emissions by 80% by 2050 compared with 1990.

The authors of the study admit on pages 10-11 to making the astonishing assumption that every other country in the world ignores the targets in their nationally determined contributions and make no further efforts to reduce emissions, so that much of the calculated costs to the United States economy subsequently arise from high-carbon companies relocate or lose business to competitors in other countries.

The model assumes no increase in low-carbon electricity generation over the next four decades compared with the baseline scenario, so no increase in economic growth or jobs in the low-carbon sector and no substitution of low-carbon energy for high-carbon energy—emissions reductions are achieved by imposing very high carbon prices that reduce the consumption of coal and energy.

The study makes the unrealistic assumption that there will be no economic benefits to the United States from avoided impacts of climate change or co-benefits from reducing local air pollution from fossil fuels which currently contributes to the premature deaths of 200,000 Americans each year, according to a study by the Massachusetts Institute of Technology*.

Overall, this is an inaccurate and misleading assessment of the cost to the United States of participating in the Paris Agreement and honouring the commitments in its nationally determined contribution—indeed, the extreme assumptions mean this a study of the costs of policy-makers attempting to achieve emissions reduction targets in some of the least cost-effective ways available.

Kenneth Gillingham, Associate Professor, Yale University:
This is possible, but hard to defend based on the evidence known today. Regulations to reduce greenhouse gases would lead to a re-optimization in the economy. For example, there would be fewer jobs at coal power plants, but more jobs in renewable energy. Whether net jobs increase or decrease depends very much on the “job intensity” of services provided in these sectors. Most estimates suggest that the job intensity is higher for renewables than for fossil fuel plants and fossil fuel extraction. See the Bureau of Labor Statistics website for very solid (but somewhat dated) evidence on green jobs in the United States.

Kenneth Gillingham, Associate Professor, Yale University:
This is unlikely. Other modeled analyses, such as those for the Clean Power Plan, have shown that monthly utility costs would decline under action due to increased energy efficiency investments. See EPA’s regulatory impact analysis.

Kenneth Gillingham, Associate Professor, Yale University:
This is misleading. While coal burning has become cleaner due to regulations on the air pollutants it emits, it still emits copious amounts of carbon dioxide, which is a greenhouse gas. Carbon capture and sequestration technologies have proven to be expensive and troubled (For example, see this story in The New York Times).

“The Clean Power Plan, a major component of fulfilling the agreement, would spike energy costs for working and middle-class Texans by 16% by 2030, according to the Economic Reliability Council of Texas”

Kenneth Gillingham, Associate Professor, Yale University:
This statement is incorrect. It is true that the Economic Reliability Council of Texas states that energy PRICES will increase by 16% (not costs—prices). However, with the additional energy efficiency investments the Clean Power Plan would encourage, total energy costs are modeled to decline, rather than increase (see the EPA analysis).

“[…]and devastates our core industries.”

Kenneth Gillingham, Associate Professor, Yale University:
This is simply untrue. The costs would be relatively minor in most modeled estimates and the benefits have been shown to be greater than the costs. Again, see the EPA analysis.