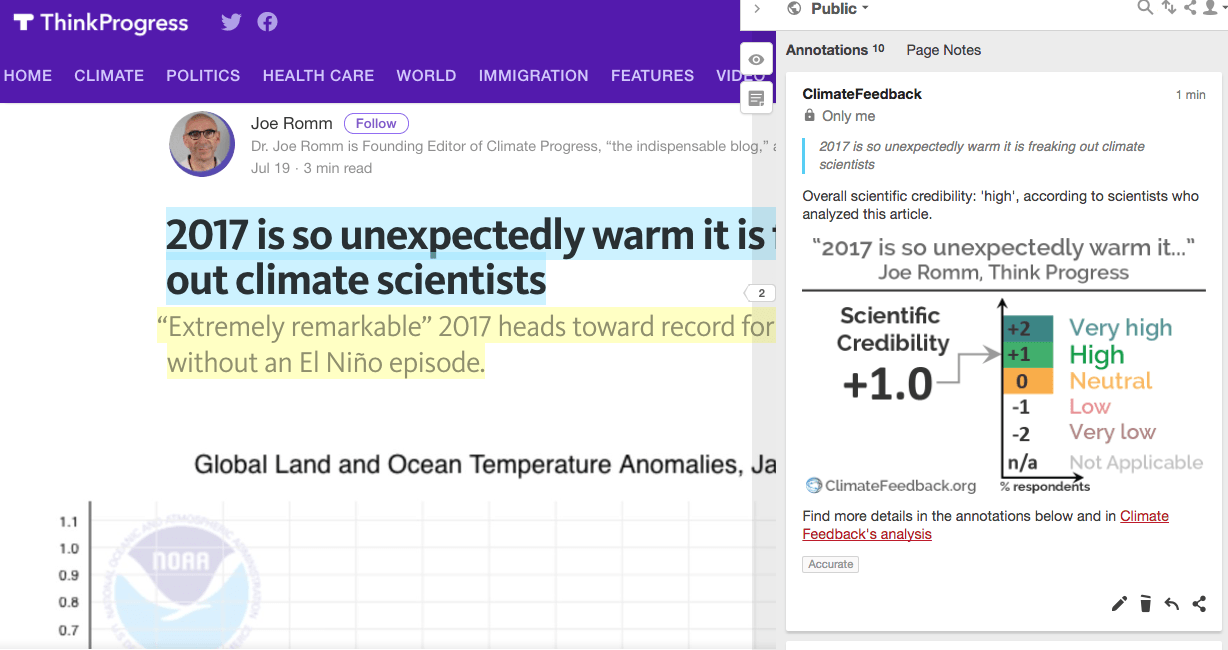 ThinkProgress published a brief but influential article commenting on record warm global temperature over the first half of 2017. The scientists who have reviewed the article confirm it accurately reports that 2017 is on track to being one of the warmest years on record. Reviewers note this wasn’t as unexpected as the article states, but the fact that 2017 global surface temperatures are that high is a clear reminder that global warming has not stopped or slowed down.

Zeke Hausfather, Director of Climate and Energy, The Breakthrough Institute:
While generally accurate, the article may overstate how unusual 2017 is shaping up to be. It is very unlikely to set a new temperature record in any of the different global surface temperature datasets (NOAA, NASA, Hadley, Berkeley Earth), and is likely to either be the second or third warmest on record. If 2017 temperatures end up comparable to or slightly below 2015, a year where the El Niño contribution was not that large, 2017 temperatures will be quite warm but “extremely remarkable” might be overstating the case a bit.

However, even if temperatures end up being below 2015, the year 2017 will likely be a bit warmer than we’d naively expect simply based on the past warming trend: 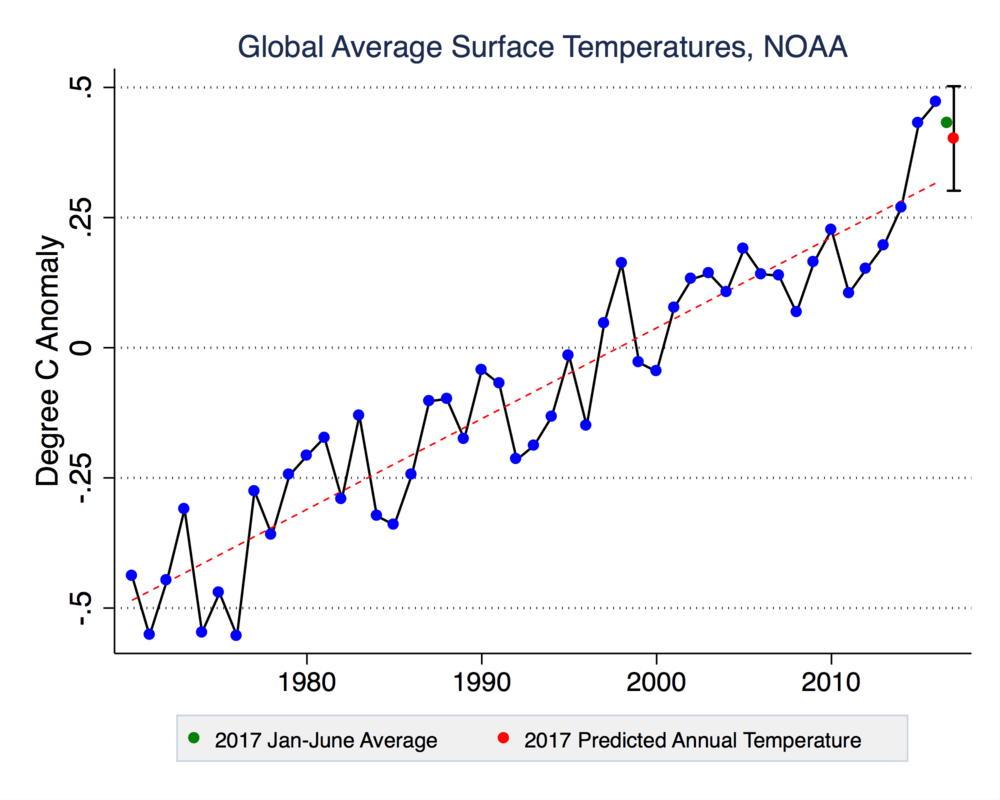 Victor Venema, Scientist, University of Bonn, Germany:
The large variety of comical claims that scientists are surprised 2017 will be warm is somewhat annoying, (the Earth is warming, every year will normally be among the warmest recorded) but the facts are otherwise right.

Richard Betts, Professor, Met Office Hadley Centre & University of Exeter:
This article is factually correct in terms of the presentation of the data, but the claim that this is “a surprise to climate scientists” is not correct. The article seems to have been written without awareness of some important and relevant climate science. In December 2016, climate scientists at the UK’s Met Office Hadley Centre predicted that 2017 would be “another very warm year for global temperatures” – see MetOffice news release.

I’m giving this a rating of 0 (neutral) because although the scientific content of the article is correct, the headline that this is “unexpected” is incorrect.

Eric Guilyardi, CNRS Research Director, Université Pierre et Marie Curie & Professor, University of Reading:
This article rightly explains that El Niño events, which see the tropical Pacific – a quarter of the planet’s surface – warm by a few degrees celsius, boost the global surface temperature by a few tenth of a degree. So having a year without El Niño being 1°C warmer than the pre-industrial period adds to the evidence that the planet is warming at a pace that is not due to natural variability.

“’Extremely remarkable’ 2017 heads toward record for hottest year without an El Niño episode.”

Victor Venema, Scientist, University of Bonn, Germany:
At the moment, it is more likely than not that 2017 will become the second warmest year of the instrumental period. The warmest was 2016 with El Niño. So this claim is correct.

“So it’s been a surprise to climate scientists that 2017 has been so remarkably warm — because the last El Niño ended a year ago.”

Victor Venema, Scientist, University of Bonn, Germany:
2016 would most likely also have been a record warm year without El Niño. Given the long-term warming trend due to global warming, it was to be expected that 2017 would also be warm. 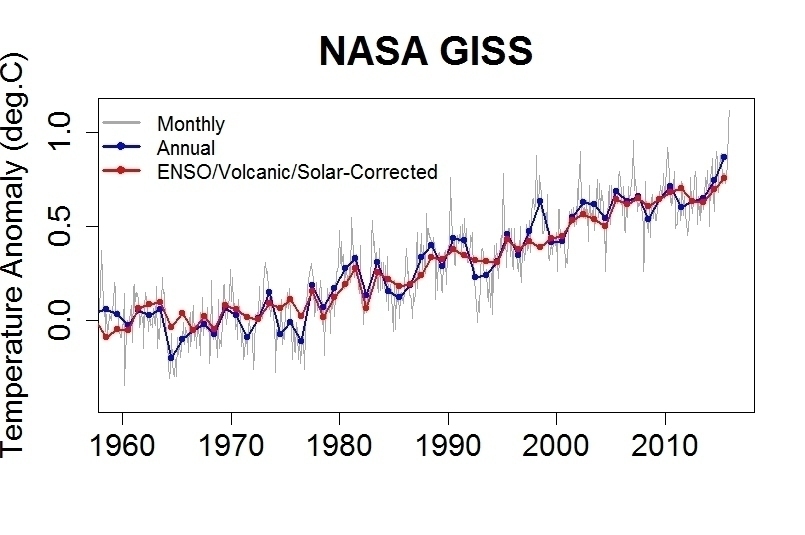 Richard Betts, Professor, Met Office Hadley Centre & University of Exeter:
The claim that this is “a surprise to climate scientists” is not correct. In December 2016, climate scientists at the UK’s Met Office Hadley Centre predicted that 2017 would be “another very warm year for global temperatures”. 2017 was forecast to be among the warmest on record, but not as warm as 2016, so what is happening is actually consistent with the prediction.

“that is a sign the underlying global warming trend is stronger than ever.”

Victor Venema, Scientist, University of Bonn, Germany:
The rate of warming has been about the same since 1980. 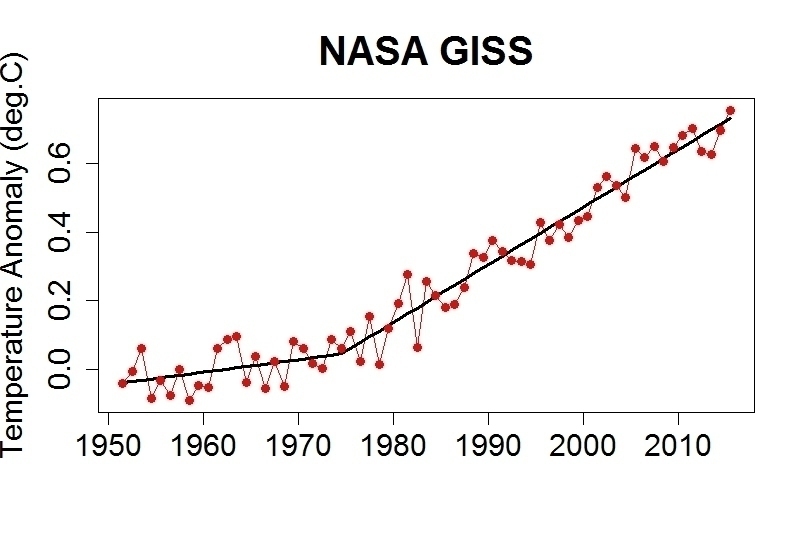 The warming is only exceptionally strong if you were deceived by people claiming that global warming had/has stopped.

“The latest NOAA report is “a reminder that climate change has not, despite the insistence of climate contrarians ‘paused’ or even slowed down,” Mann said..”

“2017 is so unexpectedly warm it is freaking out climate scientists”

Richard Betts, Professor, Met Office Hadley Centre & University of Exeter:
2017 is not “unexpectedly warm” nor is it “freaking out” climate scientists, because they predicted this!

Victor Venema, Scientist, University of Bonn, Germany:
No, we are not freaked out.