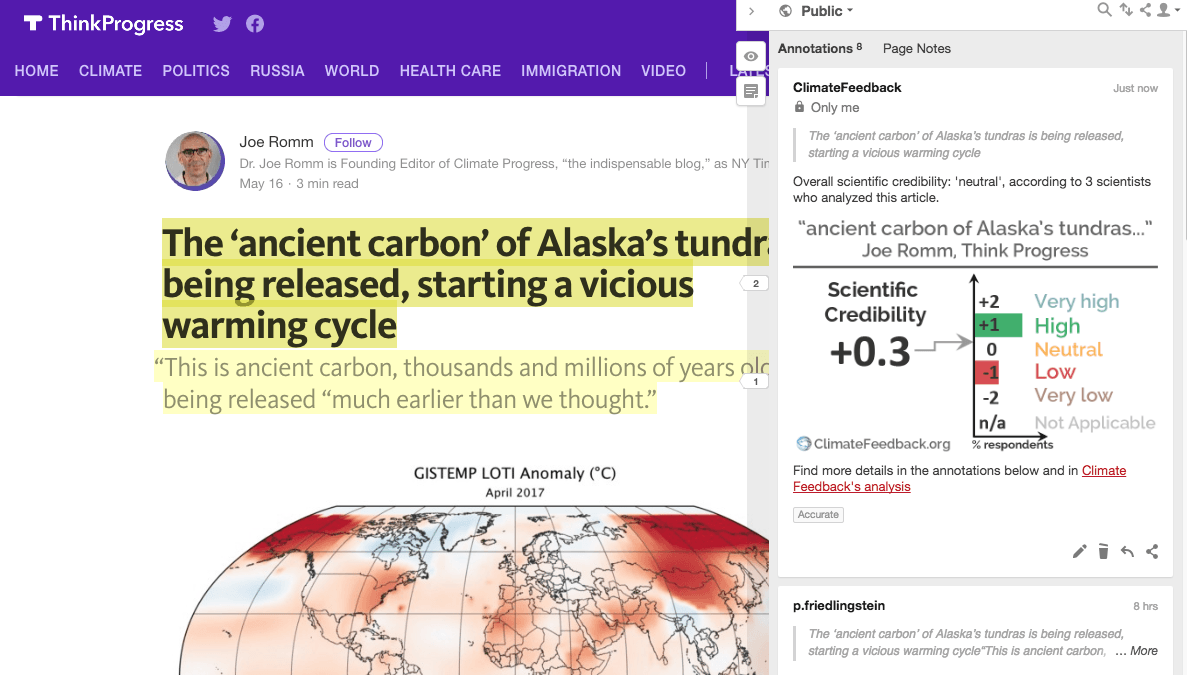 This article at ThinkProgress by Joe Romm describes a study of carbon dioxide released from warming Alaskan tundra in recent years. While the article correctly notes the study’s conclusions, it also includes some language that is imprecise or extends beyond the contents of the study.

Scientists who reviewed the story found that the article’s headline, in particular, carries a tone that exaggerates the study’s conclusions. One of the study’s authors also clarified that a personal quote used in the story (taken from a radio interview) requires context for clarity.

UPDATE (19 May 2017): The ThinkProgress article has been edited, clarifying some of the statements highlighted here, including the title of the piece. Read more

Charles Koven, Staff Scientist, Lawrence Berkeley National Lab:
The writing is a bit over the top, but factually correct in general. The main weakness is in linking the solidly evidence-based observed changes from the Commane et al paper with much more speculative links such as the Siberian methane bubbles.

Pierre Friedlingstein, Professor, University of Exeter:
The article departs significantly from the PNAS study it aims to cover. It’s catastrophic tone is not really supported by the study.

David Archer, Professor, University of Chicago:
It’s true that Arctic permafrost contains lots of carbon and that this is vulnerable to decomposition in the coming few centuries. My only caveat to the reader would be that the amount of methane from the Arctic, and even the amount of CO2, are today much smaller than anthropogenic sources of those gases. The largest source of methane in the Arctic is the fossil fuel industry, but we never hear that.

Warming of the Arctic leads to thawing permafrost, which releases carbon that amplifies the warming—but this is not a runaway feedback.

Pierre Friedlingstein, Professor, University of Exeter:
This is an interesting headline and quote. The article in PNAS uses atmospheric measurements of CO2 to derive sources and sinks from tundra and boreal forests. The study does not say that “this is ancient carbon, thousands and millions year old”… It could be, but there is no evidence for this in the paper. The paper only shows that atmospheric measurements indicate that Alaskan ecosystems have been a source of carbon in recent years (2012 to 2014).

Charles Koven, Staff Scientist, Lawrence Berkeley National Lab:
Most of the carbon in the permafrost pool is thousands to tens of thousands year old at the oldest, rather than millions.

“The Alaskan tundra is warming so quickly it has become a net emitter of carbon dioxide ahead of schedule, a new study finds”

Pierre Friedlingstein, Professor, University of Exeter:
The study doesn’t really say that. The PNAS study itself focused on 3 years (2012-2014) for which aircraft measurements were taken from April to November, and finds that Alaskan tundra was a source of carbon for 2 of these 3 years (2012 is a small sink). Then these flux estimates are compared to  data from CMIP5 models for those particular years. However,  the PNAS paper does not assess when these CMIP5 models become sources of CO2. One would need to see long time series of the CMIP5 models, along with longer time series of aircraft measurements and inferred carbon fluxes to estimate when each turn from sink to sources.

Róisín Commane, Research Associate, Harvard School of Engineering & Applied Sciences:
(Dr Commane is the first author of the scientific study discussed in the ThinkProgress article)
I spoke with Henry Fountain (New York Times), Chris Mooney (Washington Post), Oli Milman (Guardian), and Bob Berwyn (Inside Climate News) about the PNAS paper and I think they all did a great job condensing my attempts at communicating the message of the paper. The radio chat I did with a local NPR station in Juneau, AK (which I think is the source of this article) was probably the least comprehensive attempt—I tried to make things as simple as possible and didn’t realize that the quote would sound so off when taken outside of that context. I think the written articles better conveyed the essence of the paper compared to what I tried to say in the radio piece.

“Melting permafrost can release not just CO2, but also methane, a much stronger heat-trapping gas.”

Charles Koven, Staff Scientist, Lawrence Berkeley National Lab:
“Thawing” is a more accurate description than “melting” for what happens to frozen soil when you warm it.

“‘We find that Alaska, overall, was a net source of carbon to the atmosphere during 2012–2014,’ the study concludes. Data from NOAA’s Barrow Alaska station ‘indicate that October through December emissions of CO2 from surrounding tundra increased by 73 percent since 1975, supporting the view that rising temperatures have made Arctic ecosystems a net source of CO2.’”

Here is the list of statements that have been modified from the original version of the ThinkProgress article: 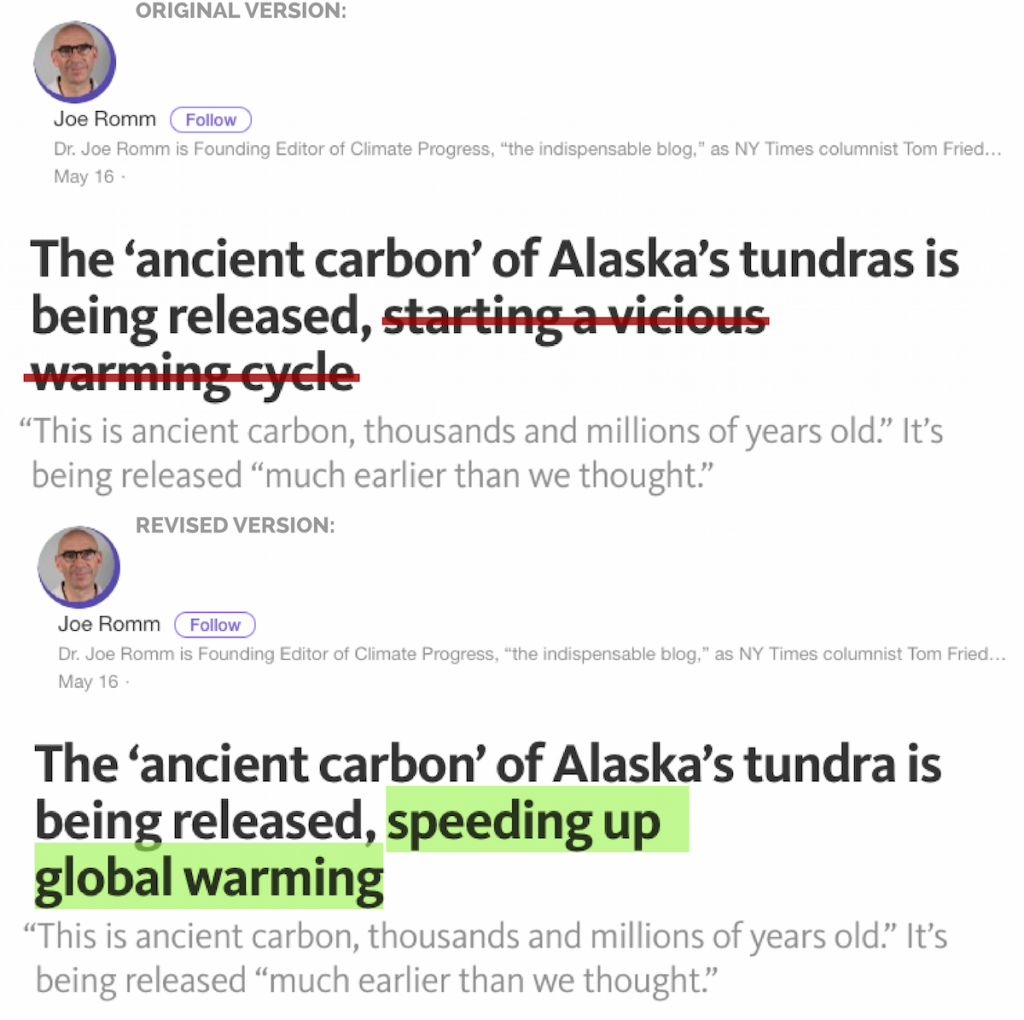 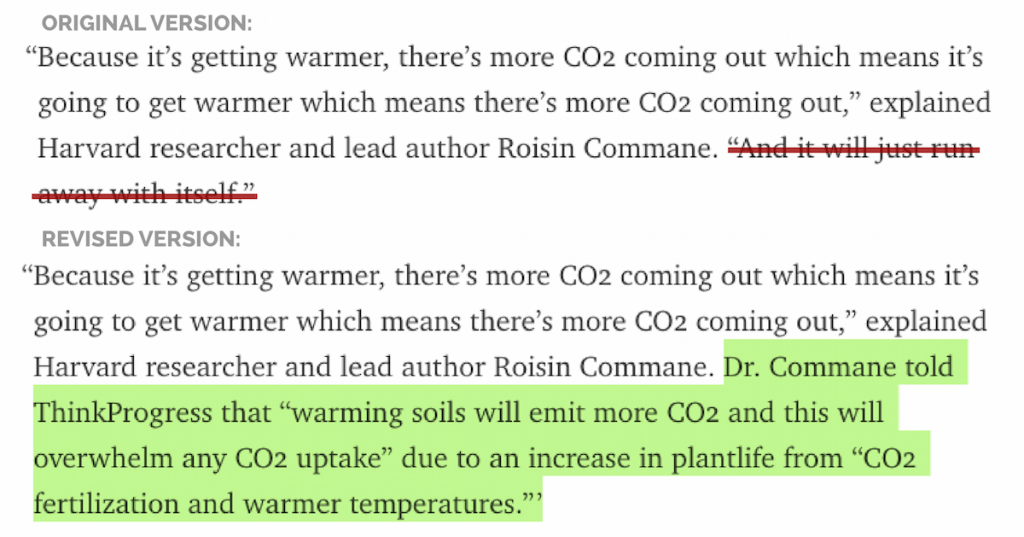 We have edited our review summary for precision. While it initially read “it also includes some language that is misleading”, we changed the word “misleading” to “imprecise”, which better describes the issue scientists had with this piece—some sloppiness in the precision of concepts used.