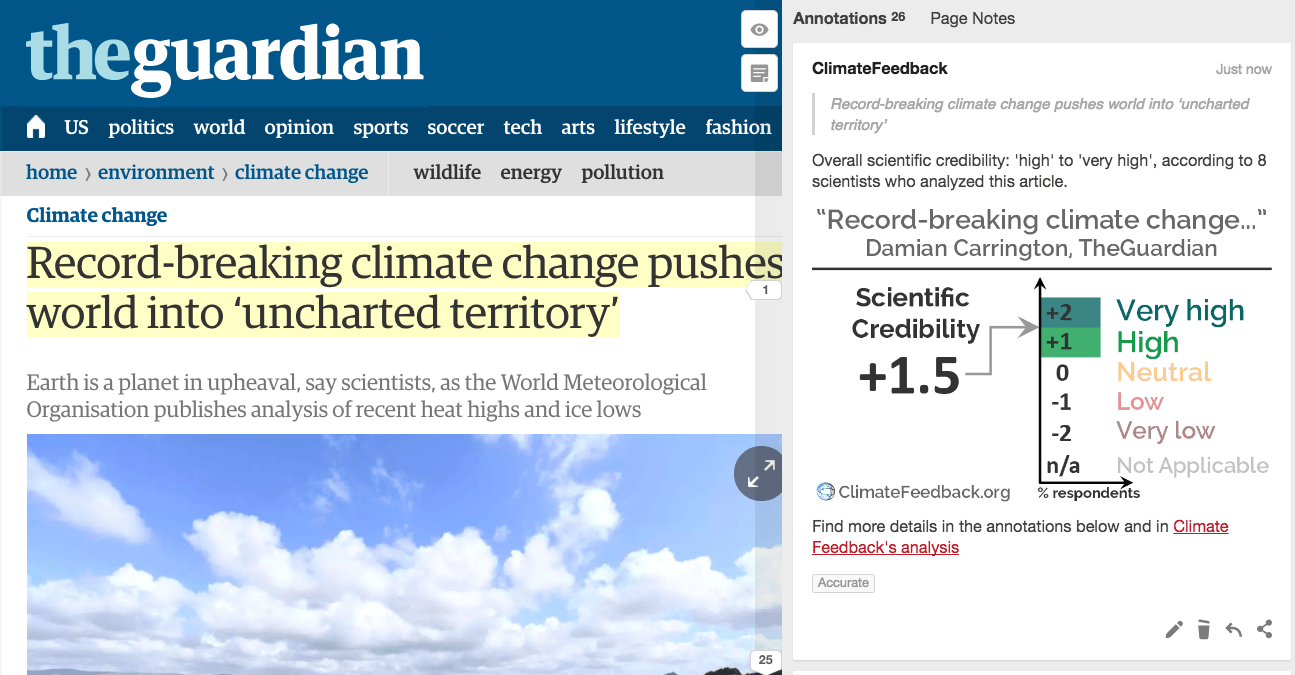 This article in The Guardian describes a “State of the Global Climate” report for 2016 recently released by the World Meteorological Organization (WMO). The report highlights observations of global temperature, sea ice extent, and sea level rise, as well as notable weather patterns.

Scientists who reviewed the article found that it accurately described climate trends and events mentioned in the WMO report, including record global warmth and notably low sea ice extents at both poles.

Timothy Osborn, Professor, University of East Anglia, and Director of Research, Climatic Research Unit:
Overall, this is an accurate and well-supported presentation of the significant nature of climate in 2016. I have highlighted a couple of statements that are overly confident/overstated, but most of the article is fine.

Andrew King, Research fellow, University of Melbourne:
The article clearly and concisely documents some of 2016’s climate extremes and puts them in the context of the warming trend.

James Renwick, Professor, Victoria University of Wellington:
An excellent summary, mostly based on a report from the authoritative World Meteorological Organization. Some of the discussion (such as around sea level rise) cuts a few corners.

Michael Henehan, Postdoctoral Researcher, GFZ Helmholtz Centre Potsdam:
In general, the article is scientifically accurate and does not misrepresent things, although to be critical, given the title and angle of the piece it might be better to focus more on observational data and measurements from 2017, rather than citing many observations from 2016. Another possible criticism is that the piece also relies heavily on quotes and opinions from scientists rather than objective datasets or new graphic representations of those datasets. There aren’t many of the measurements that the WMO have cited included in the report, for example.

Aimée Slangen, Researcher, Royal Netherlands Institute for Sea Research (NIOZ):
I think the article gives an accurate view of the WMO report, and it refers to other sources/papers to support the claims.

1. Human-caused global warming (along with El Niño conditions) lifted 2016 to the warmest year on record.

“Global warming is largely being driven by emissions from human activities, but a strong El Niño – a natural climate cycle – added to the heat in 2016.”

James Renwick, Professor, Victoria University of Wellington:
Yes, as stated in the last IPCC report, human emissions of greenhouse gases have been the dominant driver of climate change since the mid-20th century. No other changes (such as the output of the Sun) can adequately explain the observed warming.

“But scientific research indicates the world was last this warm about 115,000 years ago and that the planet has not experienced such high levels of carbon dioxide in the atmosphere for 4m years.”

Timothy Osborn, Professor, University of East Anglia, and Director of Research, Climatic Research Unit:
This statement is overly confident and not based on a broad consensus in the literature. Even the cited study states “we cannot be certain that the current year is warmer than any single year earlier in the Holocene due to centennial smoothing of the Holocene stack and original resolution of the underlying proxy records”. The most recent IPCC assessment indicates only moderate confidence that 1983-2012 was the warmest 30-year period in the last 1,400 years and limited this to the Northern Hemisphere rather than the global average.

Michael Henehan, Postdoctoral Researcher, GFZ Helmholtz Centre Potsdam:
Actually, some of the more recent estimates* have suggested that we may have crossed over the 400 ppm threshold briefly as recently as 2.4 million years ago, and again at 2.9 million years ago. (see Martinez-Boti et al.*). I think climate scientists typically think of the Pliocene (between about 5.3 and 2.6 million years ago) as being the last time period where CO2 may have been more or less permanently above the 400 ppm threshold though, so perhaps this is what they are referring to here. It might be advisable to tidy up the terminology a little here nonetheless.

James Renwick, Professor, Victoria University of Wellington:
At the last interglacial period 115,000 years ago, increased solar intensity was responsible for the added warmth, but today’s high CO2 was last seen in the atmosphere 3-5 million years ago. At that time, global mean temperatures were a couple of degrees higher than present, and sea levels were several metres higher than present.

“‘With levels of carbon dioxide in the atmosphere consistently breaking new records, the influence of human activities on the climate system has become more and more evident,’ said Taalas.”

2. Sea ice extent in both the Arctic and Antarctic have been exceptionally low in recent months.

“El Niño is now waning, but the extremes continue to be seen, with temperature records tumbling in the US in February and polar heatwaves pushing ice cover to new lows.”

Andrew King, Research fellow, University of Melbourne:
The El Niño pattern of sea surface temperatures waned quite a long time ago, with neutral conditions by mid-2016. The effects of the El Niño on the atmosphere persisted through the year, though.

Daniel Swain, Climate Scientist, University of California, Los Angeles:
The fact that numerous high temperature and low sea ice records are still being exceeded in 2017, despite the lack of El Niño conditions in the Pacific Ocean, is indeed a testament to the increasingly strong human fingerprint upon global weather and climate events.

James Renwick, Professor, Victoria University of Wellington:
This is especially striking in the Antarctic where sea ice extent has been increasing gradually for many years. We are now seeing historic lows in sea ice extent. 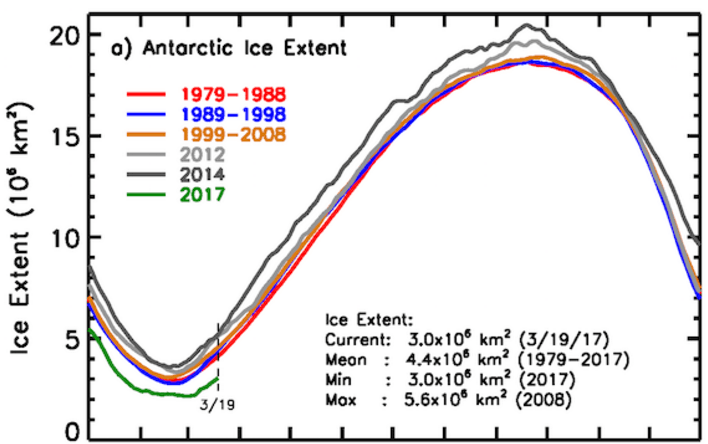 Timothy Osborn, Professor, University of East Anglia, and Director of Research, Climatic Research Unit:
Yes, this is supported by the observations, available at the NSIDC website. 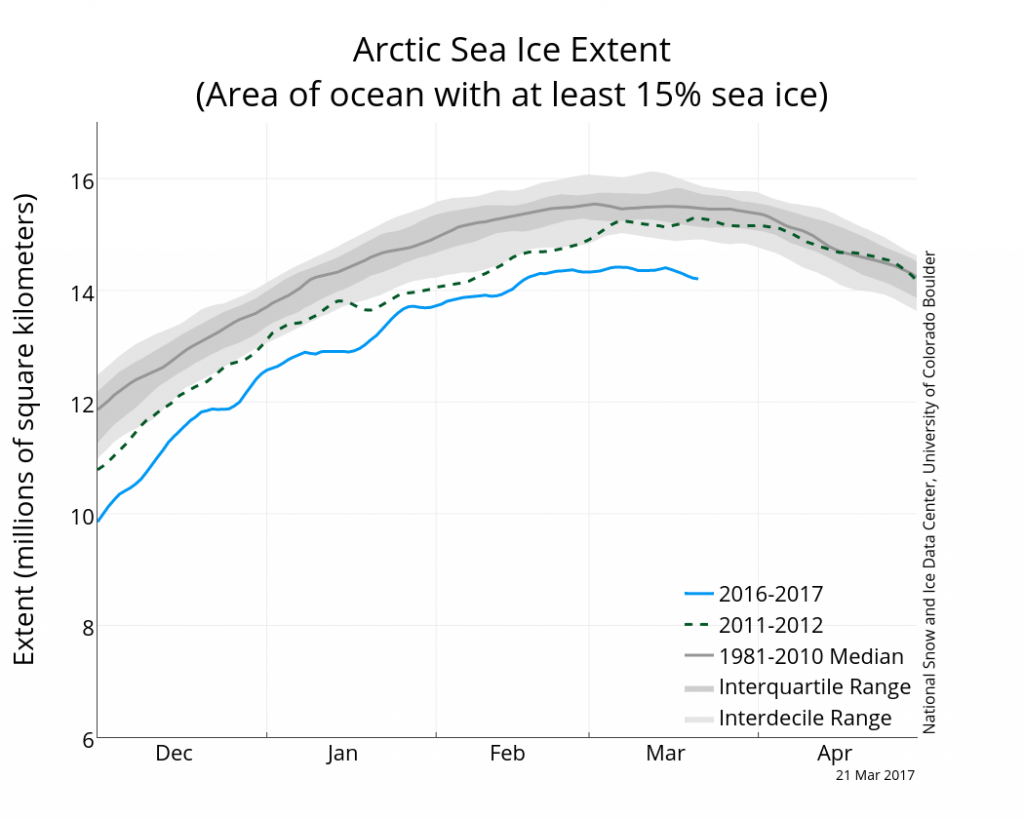 “‘The Arctic may be remote, but changes that occur there directly affect us. The melting of the Greenland ice sheet is already contributing significantly to sea level rise, and new research is highlighting that the melting of Arctic sea ice can alter weather conditions across Europe, Asia and North America.’”

Daniel Swain, Climate Scientist, University of California, Los Angeles:
There is indeed observational evidence that melting of the Greenland ice sheet, which contributes to global sea level rise, has accelerated in recent years. While scientists are still intensively investigating the details, it is also true that recent research* suggests that the loss of Arctic sea ice will mostly likely influence weather patterns in mid-latitude regions (including much of Europe, Asia, and North America).

3. The article also mentions sea level changes, notable heat waves, and some of the societal implications of continued global warming.

“The WMO’s assessment of the climate in 2016, published on Tuesday, reports unprecedented heat across the globe, exceptionally low ice at both poles and surging sea-level rise.”

Timothy Osborn, Professor, University of East Anglia, and Director of Research, Climatic Research Unit:
“Surging” suggests that the faster sea level rise in 2016 has continued, whereas the surge was between Nov 2014 and Feb 2016, as indicated in WMO’s statement and in the data. 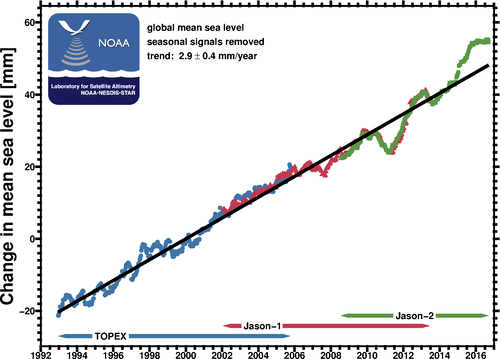 “Global sea level rise surged between November 2014 and February 2016, with the El Niño event helping the oceans rise by 15mm.”

James Renwick, Professor, Victoria University of Wellington:
A large part of this rise is related to the transition from La Niña to El Niño. The background rate of global sea level rise is still between 3-4mm per year.

“Final data for 2016 sea level rise have yet to be published.”

“For example, the Arctic heatwaves are made tens of times more likely and the soaring temperatures seen in Australia in February were made twice as likely.”

Andrew King, Research fellow, University of Melbourne:
This statement is referring to rapid attribution analyses that were conducted by the World Weather Attribution group.
We found that the Arctic heat of late 2016 was made much more likely by human-induced climate change (although it remains a very unusual event in the current climate).

In another analysis, we found the February heatwave in New South Wales was at least twice as likely to occur because of climate change.

“‘Continued investment in climate research and observations is vital if our scientific knowledge is to keep pace with the rapid rate of climate change.’”

James Renwick, Professor, Victoria University of Wellington:
Correct. We are learning as we go, observing how the climate is changing, but more effort is required to keep up with changes and to understand the physical processes at play.

“Our children and grandchildren will look back on the climate deniers and ask how they could have sacrificed the planet for the sake of cheap fossil fuel energy, when the cost of inaction exceeds the cost of a transition to a low-carbon economy,’ Watson said.”

Valentina Bosetti, Professor, Bocconi University:
There are large uncertainties surrounding the cost of inaction (i.e., what would be the monetary consequences of adapting to climate change were we not to mitigate its causes and keep emitting as we are doing today). Some of the physical impacts are estimated through projections which may be imperfect. There is large disagreement about what discount rate to use to value future climate damages1. Many of the consequences are simply hard to translate in monetary terms (non-market impacts). Some of the impacts may be nonlinear. This has lead multiple authors to consider abatement as a valuable tail-hedge insurance investment2,3.