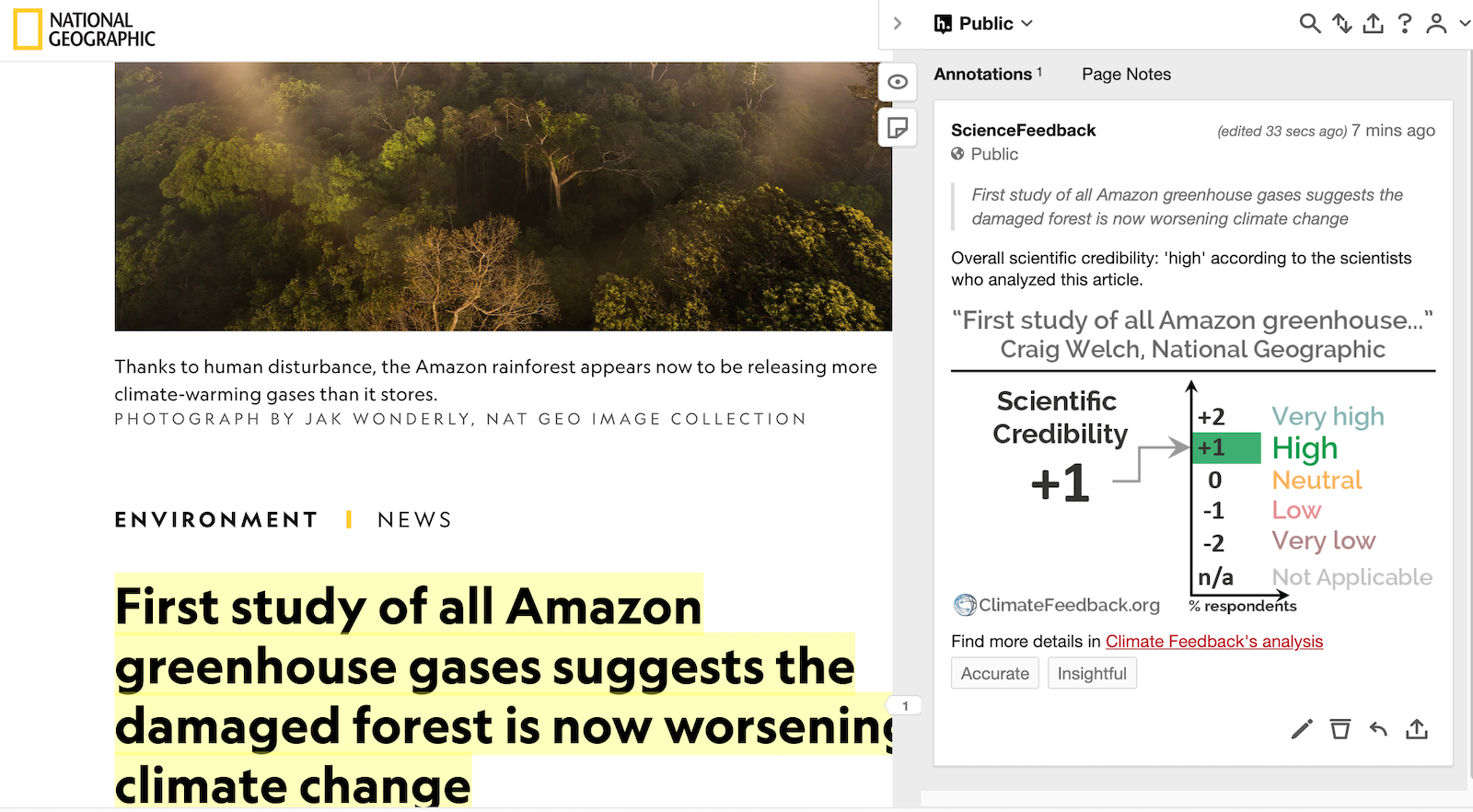 The National Geographic article discusses findings from a study published in March 2021 by Covey et al. and partly funded by the National Geographic Society[1]. This study assessed the role of the Amazon rainforest in global climate change, taking into account all non-carbon dioxide (CO2) climate drivers, such as methane, nitrogen oxide, black carbon, and evapotranspiration, among others. The article received more than 8,000 interactions on Facebook, according to the social media analytics tool CrowdTangle. Scientists who reviewed this article described it as insightful and accurate overall, however, they note a few minor points of confusion and some places that lacked context.

The recent study explored how non-CO2 climate drivers respond to local changes (deforestation, dam construction, and cattle ranching) and global changes (warming and drying of soil, wetlands, and biomass). The authors concluded that current warming from non-CO2 drivers, especially methane and nitrogen oxide, in the Amazon Basin “largely offsets—and most likely exceeds—the climate service provided by atmospheric CO2 uptake”, as accurately described in the National Geographic article. The Amazon rainforest plays a key role in slowing the pace of global warming as it absorbs large quantities of carbon dioxide from the atmosphere.

However, as David Armstrong McKay noted below, the article’s original headline claimed that the Amazon forest no longer stores carbon, which is inaccurate as the reviewer explains below. The original photo caption also didn’t clarify that greenhouse gas emissions are primarily driven by human disturbance. Both the headline and photo captions were updated to address these issues.

Another minor inaccuracy pointed out by a reviewer is the claim that scientists haven’t studied the balance between carbon storage and loss in the Amazon forest. A previous study, based on satellite measurements, concluded that tropical forests are losing more carbon than they store globally[2].

Finally, as David Armstrong McKay noted below, the article lacks some context by overlooking the scientific debate related to the difficulty of comparing the contributions of short-lived climate forcers, such as methane, and long-lived climate forcers, such as CO2. When calculating the global warming potential of each gas, the overall net effect on climate may be different depending on the time scale considered, as discussed in the study, but not in the article.
The most commonly used averaging period is 100 years, but some prefer to average over a 20 years period, which prioritizes gases with shorter lifetimes. For example methane has a residence time in the atmosphere of about a decade. Its global warming potential is 28 times more than CO2 when its effects are averaged over 100 years, but up to 84 times more when averaged over 20 years.

According to the study, among the 18 emissions scenarios considered, only three showed a cooling effect of the Amazon, whereas the others point to warming of the atmosphere. The cooling effect is obtained only when the global warming potential of non-CO2 gas is calculated over a 100 years time period.

Ana Maria Yañez Serrano, Postdoctoral Researcher, Ecological and Forestry Applications Research Center:
The article is good overall, although there are two small issues. First, the title seems to overestimate the results. The scientific study the National Geographic article is based on cannot account for all of the climate forcers, as there are no Amazon basin wide estimates (as clearly stated in the study). This drawback could potentially change the overall warming effect, and therefore the title seems to exaggerate. However, it is true that to look at the climatic effect of the Amazonian rain forest, one should not only look at CO2. Second, when the article says the moisture respired by plants falls as rain again, one should say only 50% falls as rain again, according to Zemp et al. (2017)[3]. When the article says: “But until recently, no one had attempted to understand that balance”, I’m not sure if the author is claiming that the study authors are the only ones who assessed this balance, as Scott et al., 2018 conducted the first global approach taking into account Amazonia[4].

Richard Houghton, Senior Scientist Emeritus, Woodwell Climate Research Center:
Even considering CO2 alone, the Amazon basin is likely a carbon source rather than a sink, according to Baccini et al. (2017)[2]. Based on satellite-measurement of carbon stocks, we could already conclude that the forests of Brazil and Latin America were losing more carbon than they were accumulating. However, the Baccini et al. study did not specifically quantify Amazonian forests, and did not consider other greenhouse gases.

The main contribution of this new study is that the forests of the Amazon basin are adding to climate change, not helping to slow it. And the conclusion is based on a comprehensive analysis of several greenhouse gases.

David Armstrong McKay, Researcher, Stockholm Resilience Centre, Stockholm University:
Overall this is an informative article, for the most part accurately reporting the findings of a recent review[1]. However, the original headline and photo caption (since updated) suggested that the Amazon is “no longer storing carbon for our planet” – which is inaccurate given the 150-200 billion tonnes of carbon the rainforest is still estimated to store and recent observations showing that in most years carbon storage in undisturbed areas is for the moment still growing (Hubau et al., 2020)[5]. The headline and caption also didn’t initially make it clear enough that the higher emissions are primarily driven by human disturbance rather than natural feedbacks to climate change.

The difference between disturbance-driven emissions and natural feedbacks is an important point to be clear on because several steadily worse milestones – a net warming feedback from across the whole Amazon due to direct human disturbances, undisturbed areas transitioning from carbon sinks to sources due to climate change, and a deforestation or warming-induced ‘tipping point’ beyond which a large-scale regime shift to savannah becomes inevitable – are often conflated in popular discussion of climate change and the Amazon rainforest. While this review suggests the former may be close or passed, undisturbed rainforest may take another couple of decades to become a persistent carbon source[5] and the ‘dieback’ tipping point could occur beyond 20-40% deforestation (vs. ~17% now) or ~4°C of global warming[6,7]. If the Amazon had become a net warming forcing, but this was still human-driven, then this means this may still be reversible by mitigating disturbance, whereas a transition to net positive feedbacks from undisturbed rainforest would not be easily reversible.

Although the increased focus on non-carbon dioxide forcings in the Amazon is welcome, it is also not mentioned in this article that part of the reason for the mainstream focus on carbon is that other forcing agents, such as methane, tend to be quite short-lived, reducing their long-term effect and making carbon storage the dominant factor for long-term climate change. There is some debate too over the ideal timescale and accounting method for comparing the contribution of short-lived climate forcers to carbon dioxide, but in contrast to the study, the article does not get into the issue of timescales and how it could affect the study’s conclusion. As a result, the article still lacks some extra context on forcing timescales and why some other climate scientists might disagree with the overall conclusion on this basis.

The updated article does a good job overall though at conveying the uncertainties discussed in the review, making it clear that net warming due to the Amazon is not yet confirmed, and also illustrates the Amazon’s biogeochemical complexity and the many ways it can interact with climate change.