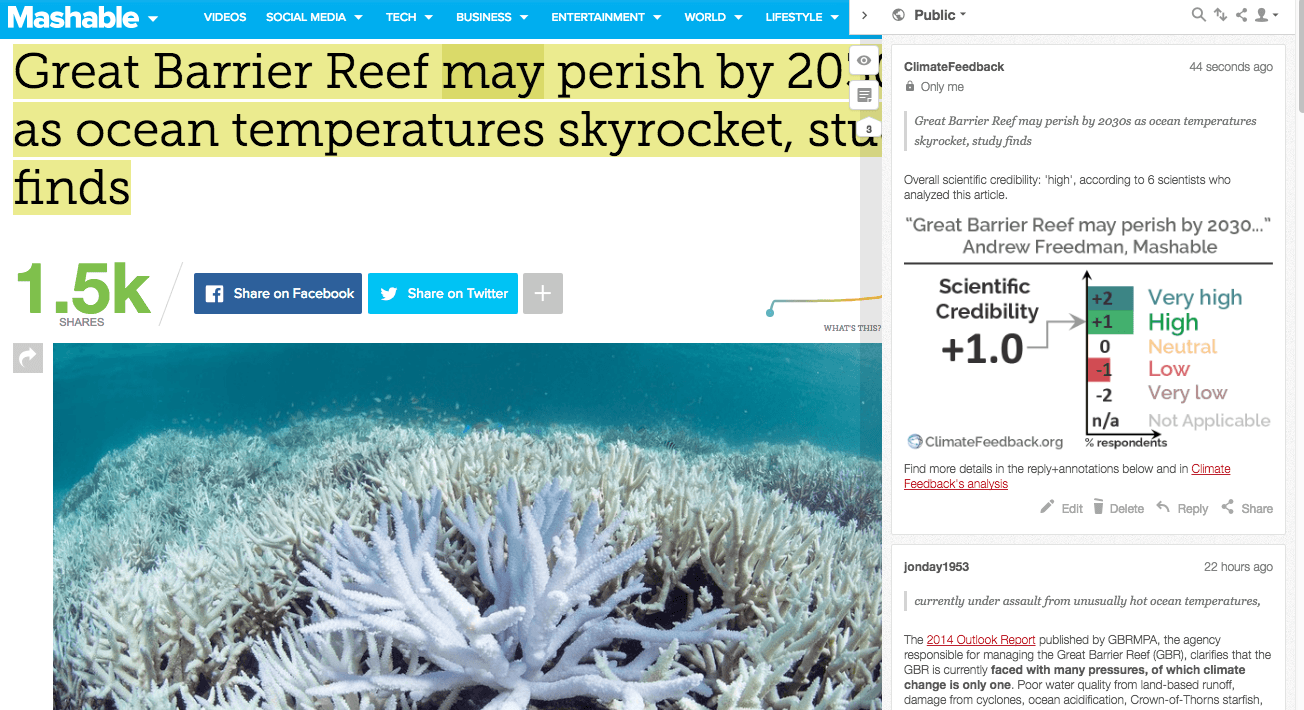 This Mashable article reports on preliminary research that finds that the ongoing coral bleaching event in the Pacific is mainly due to human-caused global warming, and that if global warming proceeds as currently expected, “large parts” of the Great Barrier Reef could die by the mid-2030s.

Six scientists have reviewed the article and conclude that overall it is accurate and in agreement with the science. The title, however, was pointed out to be somewhat exaggerated. Scientists expect that coral reefs may perish by the 2030s, yet the “Great Barrier Reef” is an ecosystem of many different species that are variously resilient to climate change. To be clear, catastrophic impacts are predicted for coral reefs, but this does not necessarily mean the entire Great Barrier Reef will be devastated.

Ove Hoegh-Guldberg, Professor and Director, Global Change Institute, University of Queensland:
The article reflects the current state of knowledge in this area. While it may sound alarming (even alarmist) that the world’s most biologically diverse marine ecosystem may be largely eliminated over the next 20-30 years, this is the conclusion and scientific consensus to be found in Chapter 30 and other places of the latest Intergovernmental Panel on Climate Change report (IPCC). It is also the consensus conclusion of the major scientific bodies and science community that study coral reefs (e.g. International Society for Reef Studies report).

Jon Day, PhD candidate, ARC Centre of Excellence for Coral Reef Studies, James Cook University:
The article focuses solely on increasing ocean temperatures whereas the Great Barrier Reef (GBR) is currently threatened by multiple pressures – however, none of the other pressures are mentioned. It builds on the erroneous headline that “..93% of the GBR has already been devastated by bleaching” – whereas the media release from the ARC Centre for Coral Reef Studies explained why this was not a true summation of the recent bleaching situation. This article also gives readers the (false) impression that the entire Great Barrier Reef will be devastated within decades; whereas the article should have clarified it was referring to the coral reefs which, whilst a critical part of the GBR, comprise around 10% of the entire area.

John Bruno, Professor, The University of North Carolina at Chapel Hill:
The article is an accurate description of an unpublished study that models the effect of anthropogenic ocean warming on ocean temperatures and coral bleaching. It is a nice description of the science, context, warming impacts, and basic ecology of the system.
Minor points off for a somewhat exaggerated headline.
(Note, the faculty are at three academic research institutions in Australia, not at the ARC, which is the national funding agency).

James Renwick, Professor, Victoria University of Wellington:
This is a very good and readable article. I can find very little to quibble with over the description of the science. Excellent science, communicated clearly.

Sarah Perkins-Kirkpatrick, Research Scientist, Climate Change Research Centre, The University of New South Wales:
I was an author on the scientific study this article is reporting on. The article is sticking to our findings very accurately. It also does a nice job of presenting the state of knowledge in the field.

The statements quoted below are from Andrew Freedman; comments and replies are from the reviewers.

1. Coral reefs around the globe are threatened with extinction this century due to climate change that causes the oceans to warm and become more acidic

“The projection that much of the Great Barrier Reef could perish within the next few decades could turn out to be too pessimistic, since other research has shown that some species of corals are surprisingly resilient to the stress from changing ocean temperatures.”

Ken Caldeira, Senior Scientist, Carnegie Institution for Science:
Whether it is two decades or four decades does not make much of a difference to people living 100 years from now. It is clear that if we do not curtail emissions dramatically and soon, coral reefs around the world will be gone.

Ove Hoegh-Guldberg, Professor and Director, Global Change Institute, University of Queensland:
I would like to add to Ken’s point here. We are already – and have been for some time – into dangerous climate change when it comes to coral reefs and hundreds of millions of people that depend on them. The first global mass coral bleaching (NB: reef scale and regional coral bleaching has been reported since the early 1980s and not before) occurred in 1998 and saw the death of an estimated 16% of reef building corals from across the planet (which sounds small until you appreciate that this is a global average!). While it is too early to speculate at this point, the fact that we now have much warmer seas underpinning the current global disturbance to temperature patterns (plus the much more severe event in Australia) suggests that we will have a much greater mortality at the end of 2016 than what we saw in 1998.

“The analysis’ findings dovetail with other research that has predicted the mass die-off of coral reefs around the planet by the year 2050, as waters warm and exceed the tolerance level of many coral reef systems.”

Ove Hoegh-Guldberg, Professor and Director, Global Change Institute, University of Queensland:
This is true. This statement refers to the study I published in 1999 (Climate change, coral bleaching and the future of the world’s coral reefs) which brought climate projections together with the known tolerances of reef building corals and specifically proposed that the conditions that cause serious bleaching today would occur every 1-2 years by 2040-2050.[…]

The important point here is that anything more frequent than 10-15 years in terms of mass coral bleaching events will overwhelm regeneration, which normally takes this long to occur. That is, coral reefs go downhill well before bleaching conditions become as frequent as every 1-2 years.

“a new study by scientists at the Australian Research Council finds that the ongoing bleaching event is mainly due to human-caused global warming, and that if global warming proceeds as currently expected, “large parts” of the Great Barrier Reef could die by the mid-2030s.”

Ken Caldeira, Senior Scientist, Carnegie Institution for Science:
We published a paper some years ago projecting that by mid-century, no coral reefs would be sustainable (Silverman et al 2009: Coral reefs may start dissolving when atmospheric CO2 doubles). It is thus not surprising to see the failure of large areas of reef before that date.

Ken Caldeira, Senior Scientist, Carnegie Institution for Science:
This word ‘may’ is obviously key. The question is: what is the likelihood.

2. The current global bleaching event is unprecedented; it is due to the combined influence of global warming and El Niño

“The ongoing global bleaching event is the longest-lasting one ever observed, and only the third ever seen. It has occurred during the warmest year on record, which occurred in 2015, and the two most unusually mild months on Earth, which took place in January and February, respectively.”

Ove Hoegh-Guldberg, Professor and Director, Global Change Institute, University of Queensland:
It should be emphasized to the readers that mass coral bleaching first turns up in scientific records in the early 1980s – with no reports prior to that. Over time, mass coral bleaching and mortality has expanded in frequency and severity, with three truly global events being recorded so far – 1998, 2010, and 2016. The apparent shortening of the interval between global events is of great concern and suggests that anything we can do now to avoid further increases in carbon dioxide and other greenhouse gases in the atmosphere will save very substantial amounts in lost income and livelihoods from subsistence as well as industries such as fishing and tourism. This is an issue of food security – the effects of which are already occurring and which are growing more serious by the day.

3. Ocean warming is one of many human pressures that are stressing coral reefs (eg pollution, acidification…)

“Australia’s Great Barrier Reef is one of the world’s greatest reservoirs of biodiversity.  A World Heritage site, it is currently under assault from unusually hot ocean temperatures,”

Jon Day, PhD candidate, ARC Centre of Excellence for Coral Reef Studies, James Cook University:
The 2014 Outlook Report published by Great Barrier Reef Marine Park Authority, the agency responsible for managing the Great Barrier Reef (GBR), clarifies that the GBR is currently faced with many pressures, of which climate change is only one. Poor water quality from land-based runoff, damage from cyclones, ocean acidification, Crown-of-Thorns starfish, dumping of dredge spoil, etc, are among a multitude of pressures which are cumulatively impacting on the GBR, and particularly upon coral reefs.

Ken Caldeira, Senior Scientist, Carnegie Institution for Science:
Note that there is also a possibility that ocean acidification is contributing stress to coral reef systems, making them more susceptible to bleaching from high seawater temperatures.

Note: The article builds on another Mashable article (“Coral bleaching has devastated 93% of the Great Barrier Reef”) whose title is misleading

“Coral bleaching has devastated 93% of the Great Barrier Reef”

Jon Day, PhD candidate, ARC Centre of Excellence for Coral Reef Studies, James Cook University:
This headline stating that “bleaching has devastated 93% of the GBR” is misleading as I explained in a recent article in The Conversation:

“It is important to recognise that if bleaching was observed on a reef, this does not mean a particular reef has entirely bleached. […] Perhaps the more accurate way to frame the results (and indeed the wording used in the media release) is to say that only 7% of the coral reefs across the Great Barrier Reef have completely avoided bleaching.”