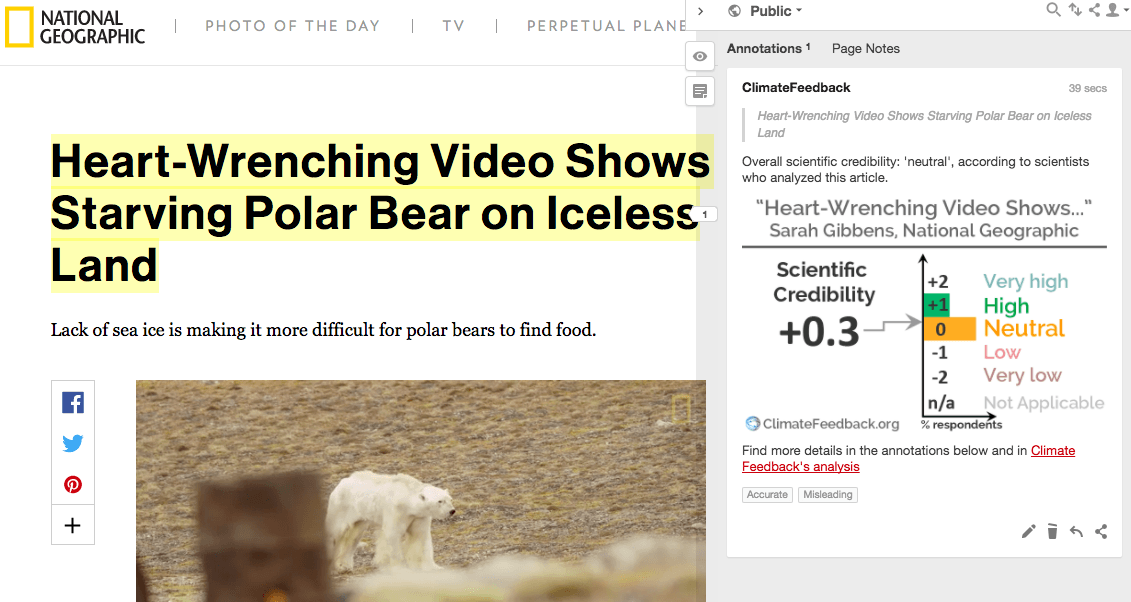 This widely-shared December 2017 article at National Geographic featured emotional footage of a starving polar bear, highlighting the plight of polar bears as the extent of Arctic sea ice declines.

Scientists who reviewed the article explained that the connection to climate change should have been explained more carefully. While polar bears will face more difficulties reaching prey as Arctic sea ice continues to diminish, it is also true that starvation is a common natural cause of death for polar bears. It is not known whether this polar bear’s death was a result of human-caused sea ice conditions, even if it does provide a visceral example of the fate many polar bears will suffer due to climate change.

UPDATE (27 July 2018): National Geographic has updated their article with the following note: “The text on the video above was edited on June 1, 2018 to make it clear that it is impossible to know why the polar bear pictured was starving. An earlier version of the video went too far in suggesting that climate change was responsible (read more).”

Karen Lone, Research Scientist, Norwegian Polar Institute:
The article contains valid information on the devastating consequences of climate change on polar bears. The only problem as I see it is that the article presents (implicitly) that the polar bear in the video is dying as a consequence of climate change and from not finding enough food due to lack of sea ice. This issue that this bear might be dying from starvation naturally due to sickness or old age should be stated more clearly in the article (and this concern has been raised in the media, by experts, already). The only flawed reasoning is the strong IMPLICIT link between climate change and the death of this particular bear in the video. However, the wording used in the article, “this is what is starving polar bear looks like…” is true. While it could be presented better in this (central) aspect, the article’s content, overall, is credible.

Steven Amstrup, Chief Scientist, Polar Bears International, and Adjunct Professor University of Wyoming in Laramie:
This reveals what declining survival looks like for polar bears, a trend we will see increase as the world warms. But the article neglected to point out this bear’s problems may or may not have had much to do with declining sea ice in the Baffin area—an error of omission that can become a target of global warming deniers.

The important lesson from the observations shown is that ever-more polar bears will be suffering this kind of fate as we allow the world to continue to warm. Largely by omission, this article suggests we know what led to this bear’s demise, and we don’t. Starvation is the main cause of death among wild polar bears. After all, they have few natural predators. Starvation rates will increase (decreased survival rates) as sea ice continues to decline. But we must be careful in presenting an observation like this as the fingerprint of climate warming. Without proper context, observations and stories like this can distract from the critical message we need to get out.

These comments are the overall opinion of scientists on the article, they are substantiated by their knowledge in the field and by the content of the analysis in the annotations on the article.
Stephen Hamilton, PhD Candidate, University of Alberta:
The 2002 WWF report and NSIDC findings cited would be better replaced with peer-reviewed literature, of which there are many high-quality and more modern choices. Furthermore, there is good work done on polar bear energetic needs and how land-based nutrition is insufficient for their diet*.

The title’s inclusion of “iceless land” could give the impression that being on land is the cause of starvation in itself. Nevertheless, the article correctly mentions that it is not uncommon for bears to fast for months.