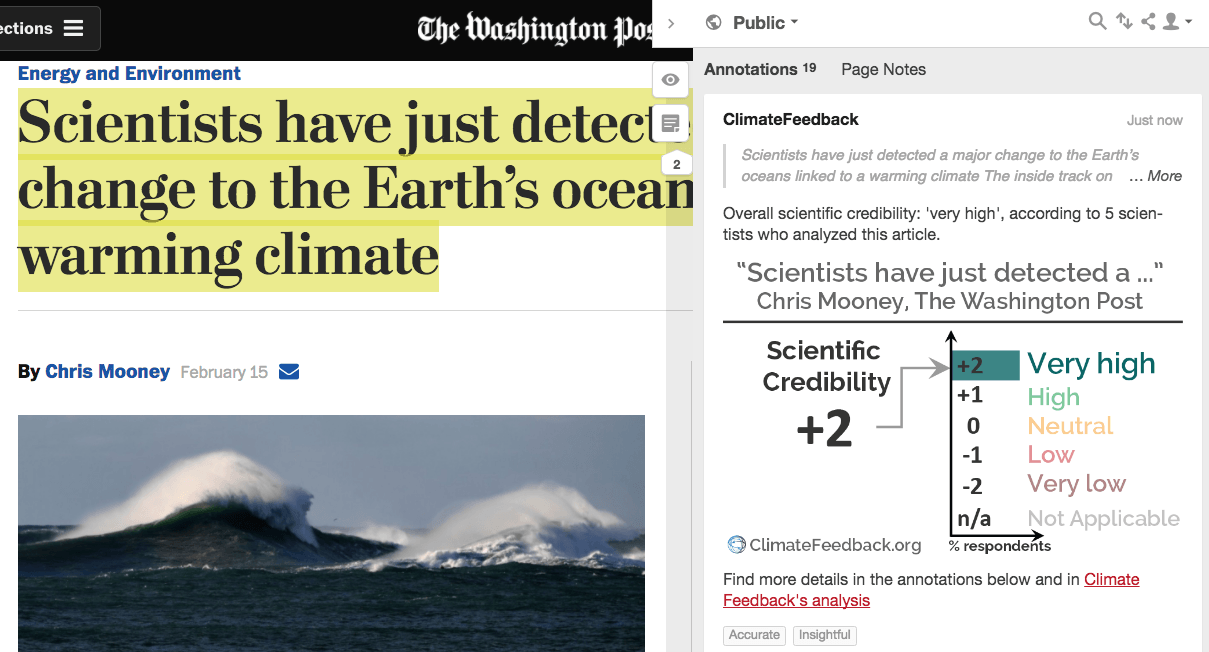 This article in The Washington Post details a new study that compiled oxygen concentration measurements in the ocean from all over the world, showing a detectable global decrease of a little more than 2% since 1960. While the study does not definitively evaluate the cause of the observed decrease, this is an expected consequence of ocean warming.

According to the scientists who reviewed the article, it accurately represents research on the topic—including clear and measured descriptions of the negative impacts of oxygen trends on marine life.

Marina Levy, CNRS Senior scientist, Université Pierre et Marie Curie:
The content of the article is correct. It reports on a new study in Nature showing the first observational evidence of a diminution of oxygen levels in the oceans at a global scale. This is in agreement with projections from climate models. In some regions where oxygen concentrations are already low, this can be critical for ecosystems.

Lauren Simkins, Assistant Professor, University of Virginia:
Changes in ocean chemistry, temperature, and circulation have significant consequences for marine life and can initiate positive feedbacks to accelerate ocean and atmosphere warming. This article is refreshing in that the author presents the results and significance of global ocean oxygen loss accurately and very clearly for non-expert audiences.

Soeren Thomsen, Postdoctoral Research fellow, Sorbonne University:
This is a very good article which includes an interview with the first author as well as comments from two other researchers (Matthew Long and Denis Gilbert) who work on oxygen. The article is very accurate and the author does not exaggerate, but tries to explain several details.

Jonathan Lauderdale, Postdoctoral Research Associate, MIT:
This article was well substantiated and measured in its reporting of the decline in global ocean oxygen concentrations, without being hysterical about the potential for mass fish suffocations, which I have seen in previous articles on this subject. Several quotes were from scientists not involved in the research paper, which lends credibility. Shame that the headline is not entirely transparent about the content of the article. The content does support the headline, but I would still consider this clickbait.

1. There has been a detectable decrease in oxygen concentrations in the ocean. This trend is projected to continue as the oceans warm.

“A large research synthesis, published in one of the world’s most influential scientific journals, has detected a decline in the amount of dissolved oxygen in oceans around the world — a long-predicted result of climate change that could have severe consequences for marine organisms if it continues.”

William Gilly, Professor of Biology, Stanford University, Hopkins Marine Station:
It has been clear for at least 10 years that oxygen has been declining in the world’s oceans, both in near-surface waters and at depth, particularly in those areas with strong, natural oxygen-minimum-zones. This new study greatly extends analyses of historical data to include a significantly longer time period, a much broader global area, and to the entire water column—from the surface to 6,000 meters [depth]. This volume represents most of the inhabitable volume of the planet, and what happens there impacts all organisms, including humans, that inhabit the thin skin of terra firma.

“But as that upper layer warms up, the oxygen-rich waters are less likely to mix down into cooler layers of the ocean because the warm waters are less dense and do not sink as readily.”

As the upper-layer of the ocean warms faster than the deeper layers, the temperature stratification increases, with the already-warm upper layer getting warmer. This enhanced thermal stratification acts as a barrier to vertical mixing, since warmer water is less dense (like when a low density fluid (e.g. oil) tops a high density fluid (e.g. water)). This stratification can prevent oxygen coming from the surface from reaching deeper layers where it gets depleted by biological activity (respiration).

As climate change proceeds, the upper-ocean layer is also expected to become fresher (less salty) in the tropics as rainfall increase, further increasing the upper-ocean stratification[2].

“‘Natural variations have obscured our ability to definitively detect this signal in observations,’ Long said in an email. ‘In this study, however, Schmidtko et al. synthesize all available observations to show a global-scale decline in oxygen that conforms to the patterns we expect from human-driven climate warming. They do not make a definitive attribution statement, but the data are consistent with and strongly suggestive of human-driven warming as a root cause of the oxygen decline.’”

Soeren Thomsen, Postdoctoral Research fellow, Sorbonne University:
It’s very good that the difficulties in detecting the signal of declining oxygen are mentioned by citing a researcher. Also the very cautious statement on the reasons are good. No unnecessary panic mongering.

Lauren Simkins, Assistant Professor, University of Virginia:
This is supported by the relatively rapid (sub-decadal to decadal) changes in global ocean oxygen loss that are consistent with rapid changes in atmospheric greenhouse gas emissions and associated warming effects on the atmosphere and ocean, when compared to the longer-term context recorded in geological archives of past ocean variability.

“Because oxygen in the global ocean is not evenly distributed, the 2 percent overall decline means there is a much larger decline in some areas of the ocean than others.”

Jonathan Lauderdale, Postdoctoral Research Associate, MIT:
I think this is a subtle and important point to make—2% globally might not seem that much but there will be areas where the decline is more significant, such as the boundaries of Oxygen Minimum Zones, where waters could go from habitable to uninhabitable.

2. Areas of the ocean that are extremely low in oxygen significantly impact local ecosystems. The trend of decreasing oxygen concentrations is associated with increasing consequences for marine life.

“Moreover, the ocean already contains so-called oxygen minimum zones, generally found in the middle depths. The great fear is that their expansion upward, into habitats where fish and other organism thrive, will reduce the available habitat for marine organisms.”

William Gilly, Professor of Biology, Stanford University, Hopkins Marine Station:
Expansion of naturally occurring oxygen-minimum-zones, particularly the world’s largest in the eastern Pacific Ocean, is becoming more and more firmly established over a vast region at depths of several hundred meters. What’s important—and counter-intuitive—about these oxygen-minimum-zone regions is that they tend to be dynamic features of some of the most productive upper-ocean areas on Earth. The Humboldt Current system off South America supports the world’s largest single-species fishery (Peruvian anchovetta) but has water with extremely low oxygen concentration in near-shore fishing zones at depths of less than 100 meters. Any vertical (upwards) expansion of this oxygen-minimum-zone will compress the surface layer where anchovetta as well as their predators (including human fishers) operate. Increasing the density of predator and prey in a shrinking volume seldom produces a pretty result. It’s not just a matter of reduced habitat for individual species—it’s more like putting an entire highly productive ecosystem into a trash compactor.

“At the end of the current paper, the researchers are blunt about the consequences of a continuing loss of oceanic oxygen. ‘Far-reaching implications for marine ecosystems and fisheries can be expected,’ they write.”

William Gilly, Professor of Biology, Stanford University, Hopkins Marine Station:
Potential biological consequences of the trends in ocean deoxygenation documented are, if anything, understated. This is really serious business. We have done a fair job at increasing public awareness of ocean acidification, and we need to do that with deoxygenation as well. The scary thing is we know very little how these two phenomena (low pH and low oxygen) work together to impact animals that live in the ocean—from plankton to predators. When you add increasing temperature to this mix, it is clear that we have a lot to learn.

Soeren Thomsen, Postdoctoral Research fellow, Sorbonne University:
It’s true that this is the last sentence of the paper. However, they refer to another study here:

3. The warming of the world’s oceans also has many other impacts, including sea level rise and “positive feedbacks” that can further enhance global warming.

Lauren Simkins, Assistant Professor, University of Virginia:
This is especially true for marine-terminating glaciers, meaning that the seaward-most margin of the glacier rests on a bed below sea level and, therefore, in direct contact with the ocean. Examples are glaciers in the Amundsen Sea, Antarctica such as Pine Island and Thwaites glaciers*, currently experiencing rapid retreat that is associated with warm ocean water melting the glaciers and their floating ice shelves.

“On top of all of that, declining ocean oxygen can also worsen global warming in a feedback loop. In or near low oxygen areas of the oceans, microorganisms tend to produce nitrous oxide, a greenhouse gas, Gilbert writes.”