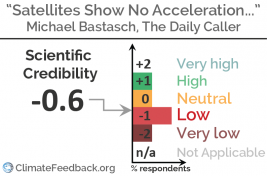 in The Daily Caller, by Michael Bastasch

"The absence of accelerating warming trends is meant to go against prevailing climate science, but I find that to be a strawman argument. In that sense the article is misleading—however, to its credit, it does report on other published results that contradict this recent study, but it fails to provide further context or to make any effort to compare/reconcile the validity of these different studies." 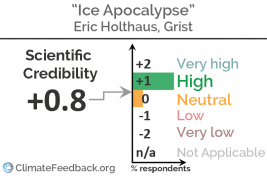 Grist article on an “Ice Apocalypse” mostly accurate, but doesn’t make the likelihood of that apocalypse clear enough to readers

in Grist, by Eric Holthaus

"The article has a bias, emphasizing the high end scenarios of ice sheet behavior, avoiding scrutiny of model assumptions. The concept of marine ice cliff instability and how unusual it is as a mechanism today on the vast coastline of Antarctica or Greenland is ignored." 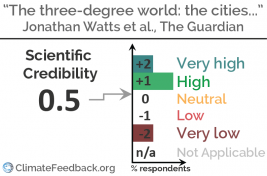 "This article provides an excellent visual of an unfortunately very likely general future for humanity, in which sea level rise slowly inundates many coastal cities ... However, one major drawback of this article is that the magnitude and timescale of the sea level rises described in this report are not well explained." 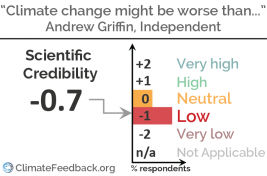 in The Independent, by Andrew Griffin

"The article reports on a paper which suggests there may be complications with ONE method we use to determine past ocean temperature. Notwithstanding possible flaws in the methods of the paper, the article ignores significant evidence from other measurements and observations and tells us nothing directly about the severity of future and present climate change." 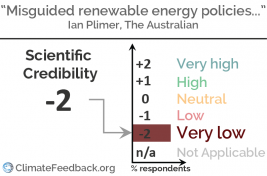 "Yet another in the exhausting heap of opinions choosing not to engage with evidence, while still expecting readers to believe inaccurate and baseless claims. It is baffling why publications such as The Australian wish to promote opinions that are both not well-argued and demonstrably not based on fact." 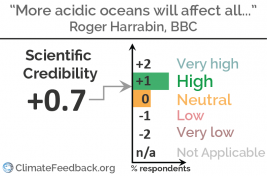 in BBC, by Roger Harrabin

"A good summary of BIOACID's key results. The information provided here is based on peer-reviewed scientific articles... I think these complex (and so far poorly understood) food web interactions deserve attention by both the public and the scientific community." 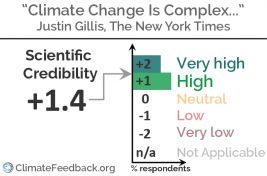 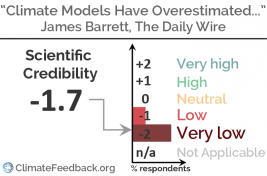 "The article selectively quotes from interviews and scientific papers to create the false perception that climate models significantly overestimate the rate of warming. The article also falsely implies that the cited paper is about the so called “hiatus” while the paper is actually about the carbon budget for the 1.5 ºC target." 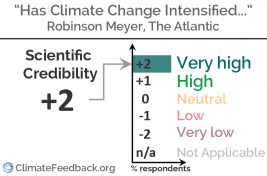 Global Warming and fire suppression practices boost wildfires in the US West, as correctly reported in The Atlantic

"The article provides an excellent summary of how rising air temperatures are leading to drier conditions and more fire activity among forests in parts of the western United States. The article is strengthened by including multiple interviews with scientists who have produced seminal studies of fire-climate interactions in this region." 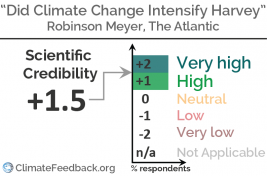 "A well written article that captures the essence of our understanding that under climate change storms will likely bring more rainfall. In the case of Harvey, all we can say is that it is consistent with those ideas. But we cannot say that it is the direct consequence of climate change."