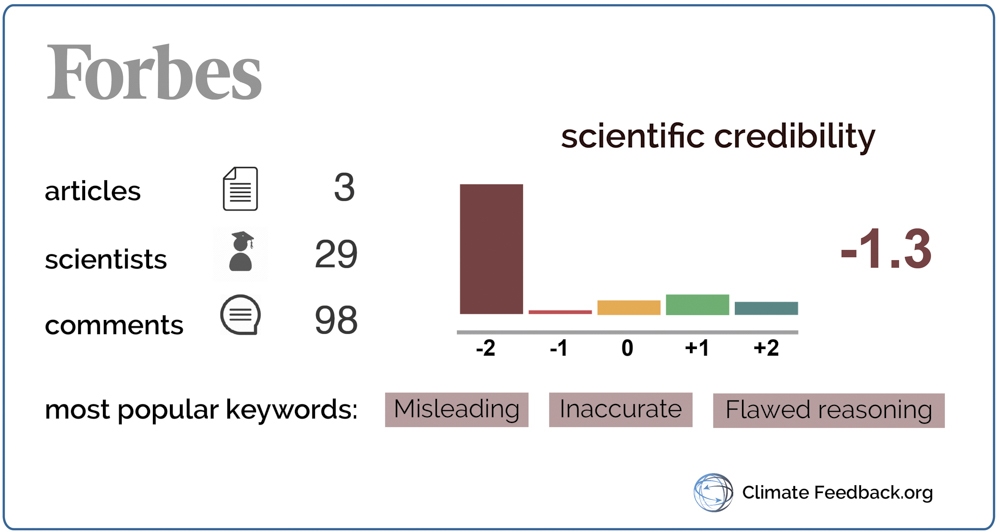 Recently, scientists analyzed some of Forbes’ most influential climate articles for 2015. While one article was rated as highly accurate, two articles were found to be deeply inaccurate and misleading by the more than 20 scientists who reviewed them. In both cases, all scientists independently gave the articles the lowest possible scientific credibility rating.

These two articles, both written by Forbes contributor James Taylor, include: “Top 10 Global Warming Lies That May Shock You,” which has 125,000 views; and “Updated NASA Data: Global Warming Not Causing Any Polar Ice Retreat,” which has more than 750,000 views as of December 9 2015 and is still being pushed to tens of thousands of new readers every week – which gives an idea of the scale of the problem we’re tackling.

Dr David Bahr, an associate professor at Regis University and Institute of Arctic and Alpine Research, University of Colorado, was one of the scientists who analyzed Taylor’s “Top 10 lies” article, and commented on its overall scientific credibility:

“I have rarely read such a misleading and factually inaccurate article,” he wrote. “This is not science journalism and has no place in a magazine that purports to be a leading source of reliable news. It cannot qualify as an informed or informative opinion piece, and Forbes does their readers a great disservice by allowing the publication of blatant falsehoods.”

Taylor is one of the primary contributors to Forbes’ climate change coverage, and yet based on his stories his basic climate science knowledge appears to be seriously flawed. In addition to being inaccurate, these articles are deeply misleading, as noted by Dr Julienne Stroeve in “Updated NASA Data: Global Warming Not Causing Any Polar Ice Retreat”:  “The article is misleading and completely incorrect. It appears that the article is lumping together sea ice and ice sheets, although perhaps the author does not know the difference between sea ice and the ice on Greenland and Antarctica.”

Taylor discusses land and sea ice interchangeably, which is “a fundamental error, equivalent in other fields to confusing house and senate, or an artery and vein”, according to Dr Ken Mankoff.

This is one out of many arguments that proves to be incorrect:

Dr Robert Grumbine comments: “Incorrect on at least two levels. What he compares is ice at a particular time in 1979 with ice at a particular time in 2015. Today, the figure is negative; ice is again below the long term average, and below values at any time in 1979.
The second and more important level on which this is wrong is that for examining long term trends, scientists use all the data, not just two particular days out of 36 (and growing) years of data. The long term trend is negative.”

Dr Twila Moon comments: “This is flat out false. NASA has an excellent visualization and graph of Arctic sea ice decline since 1979 here. Antarctic sea ice, on the other hand, has had some expansion. However, this expansion does not negate climate change, as explained in this news article.”

So far, scientists have only analyzed a few articles from Forbes. More will be needed to confidently assess the overall credibility level of the outlet when it comes to climate change coverage. However, because these two inaccurate articles are among the most popular of the year, this is already a very significant result.

Though Taylor is a contributor and not a staff writer, we believe Forbes has a responsibility to ensure that the site is being used to disseminate accurate journalism, not factually inaccurate information, as is the case with both Taylor’s articles.

“This article simply ignores the essential principles of good scientific journalism: Truth and accuracy, independence, and impartiality. The article is plagued with inaccurate information and false statements about climate and glacier change.” – Dr. Tobias Sauter commenting on the “Updated NASA Data” article.

Views of Forbes’ climate articles hover around 10,000. The mass audience that these articles have reached, which is still increasing even 7 months after publication, suggests that these articles are being actively pushed to a large audience. This raises the question of whether Forbes, an established and esteemed publication, is being used to broadcast inaccurate information about climate change and push a political agenda.

You can find the full analyses for these Forbes articles here: