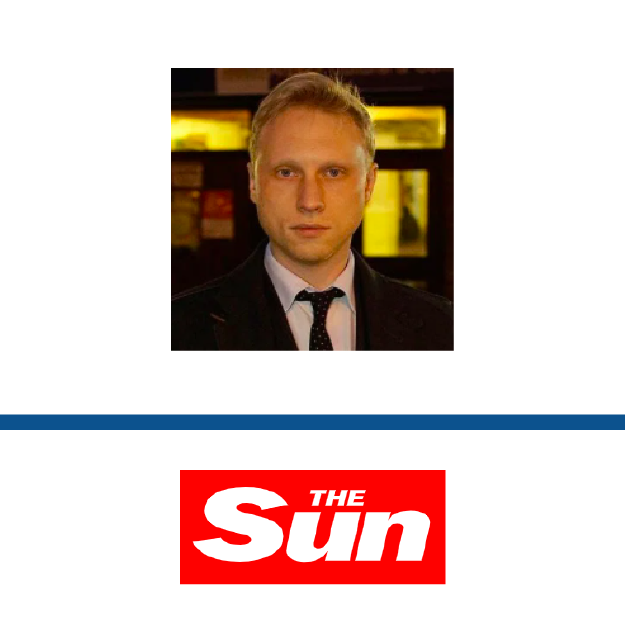 CLAIM
"The sun has gone into ‘lockdown’ which could cause freezing weather, earthquakes and famine, say scientists"
VERDICT more about the rating framework

DETAILS
Incorrect: Solar activity cycles have little effect on the Earth’s climate and are not related to earthquakes or volcanic eruptions.
Inadequate support: The article does not provide references to support predictions about solar activity and its effects on climate.
KEY TAKE AWAY

Although solar activity is currently in a quiet phase, this is typical of the 11-year cycle in the Sun’s energy output. The effect of low solar activity on the Earth’s climate is small compared to global warming caused by greenhouse gas emissions.

CLAIM: “The sun has gone into ‘lockdown’ which could cause freezing weather, earthquakes and famine, say scientists. Nasa scientists fear it could be a repeat of the Dalton Minimum, which happened between 1790 and 1830 — leading to periods of brutal cold, crop loss, famine and powerful volcanic eruptions.”

This claim appeared in multiple outlets including The Sun, PJ Media, and the New York Post, and has been viewed on Facebook more than 40.5 million times in the past week. This claim, along with several others made in the article, contradict or are unsupported by scientific evidence. While the Sun varies in energy output in approximately 11 year cycles, this cycle has little effect on Earth’s climate, particularly compared to global warming caused by greenhouse gas emissions[1].

The claim “Nasa scientists fear it could be a repeat of the Dalton Minimum, which happened between 1790 and 1830 — leading to periods of brutal cold, crop loss, famine and powerful volcanic eruptions,” is unsupported and contrasts with scientific evidence showing no relationship between low solar activity and Earth’s climate[1].

The latest sun cycle forecast data shows a solar minimum occurring this year (see figure below), but there is no evidence of a prolonged “grand minimum” occurring, as the reviewers explain below.

The article relies on a quote from Dr. Tony Phillips stating that “Solar Minimum is under way,” but the quote does not mention temperature, earthquakes, or famine. Contrary to this claim, NASA explains, “the current scientific consensus is that long and short-term variations in solar activity play only a very small role in Earth’s climate. Since 1750, the warming driven by greenhouse gases coming from the human burning of fossil fuels is over 50 times greater than the slight extra warming coming from the Sun itself over that same time interval.”

A study evaluating the relationship between low solar activity and Earth’s climate found that a grand solar minimum may offset -0.3°C at most, a decrease much smaller than the warming expected from greenhouse gas emissions (see figure below)[1]. 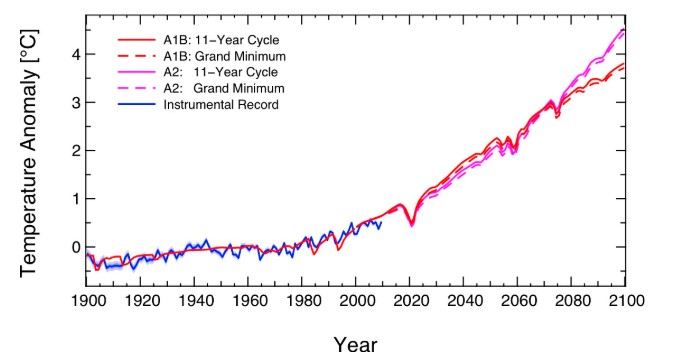 The article is misleading to readers by suggesting the volcanic eruption of Mount Tambora in 1815 was linked to the Sun’s activity. The article claims, “NASA scientists fear it could be a repeat of the Dalton Minimum, which happened between 1790 and 1830 — leading to periods of brutal cold, crop loss, famine and powerful volcanic eruptions…On April 10, 1815, the second-largest volcanic eruption in 2,000 years happened at Mount Tambora in Indonesia, killing at least 71,000 people.” However, as the reviewer explains below, this eruption was not related to solar activity and the article provides no support for its claim of a link.

There is also no scientific evidence to support the claim that a solar minimum can cause earthquakes, as claimed in the headline[2]. According to the USGS, “it has never been demonstrated that there is a causal relationship between space weather and earthquakes. Indeed, over the course of the Sun’s 11-year variable cycle, the occurrence of flares and magnetic storms waxes and wanes, but earthquakes occur without any such 11-year variability.”

Although solar activity is currently low, this is typical of the 11-year cycle. There is no scientific evidence to support the claims that low solar activity can cause freezing weather, famine, earthquakes, and volcanic eruptions.

UPDATE (22 May 2020): After this post was published, the headlines and bodies of articles in The Sun and the New York Post were corrected to clarify that low solar activity does not cause brutal cold, crop loss, famine, or volcanic eruptions. These articles now include disclaimers saying previous versions of the articles included misleading claims.
(27 May 2020): After this post was published, the headline and body of an article in The Daily Mail was corrected to clarify that solar activity cycles have little effect on the Earth’s climate.

Rasmus Benestad, Senior scientist, The Norwegian Meteorological institute:
There are indeed some indications that the solar activity is declining, e.g. as seen from the sunspot number during the most recent solar max in ~2014. 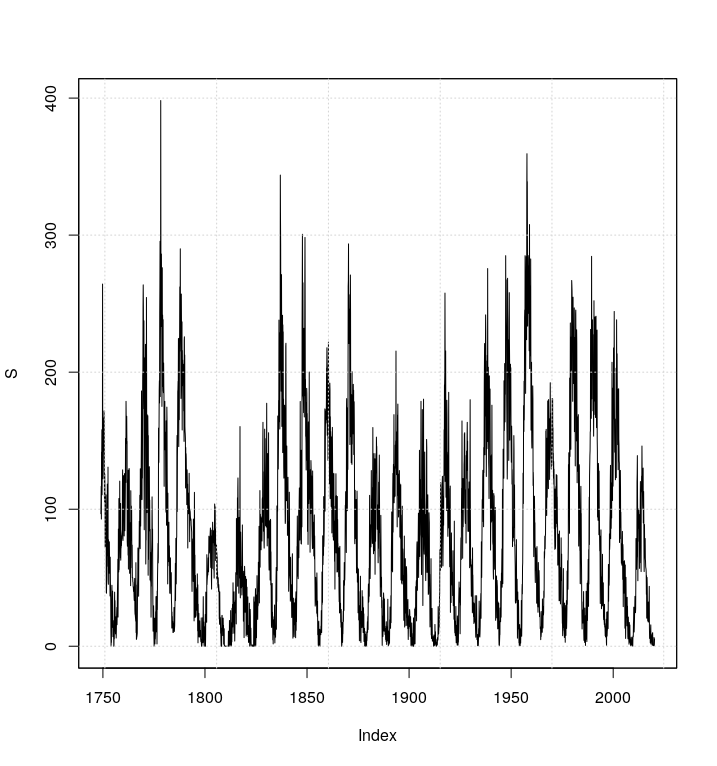 Figure—Updated sunspot record shows a lower number of sunspots during the most recent solar maximum. The solar minima, on the other hand, tend to be on a similar level with few sunspots, and we are currently heading into a solar minimum as is typical every ~11 years. Source: http://sidc.oma.be/silso/DATA/SN_m_tot_V2.0.txt

Claim: “Sunspot counts suggest it is one of the deepest of the past century. The sun’s magnetic field has become weak, allowing extra cosmic rays into the solar system.”

This sentence is also consistent with the sunspot record, but the solar max in ~1885 was almost on the same level as the recent solar max in ~2014. The solar maxima in ~1805 and ~1817 were at lower levels, however.

Claim: “Nasa scientists fear it could be a repeat of the Dalton Minimum, which happened between 1790 and 1830 — leading to periods of brutal cold, crop loss, famine and powerful volcanic eruptions.”

The implication of this sentence is not supported by science.

In 1815, there was a big volcanic eruption (Tambora in Indonesia) which was responsible for a drop of temperature (the year without summer) and poor crop yields, but it was completely unrelated to the solar activity.

There is anecdotal evidence for low temperatures in Europe in 1816, but there is little data from the rest of the world available from that time. The longest ongoing instrumental temperature record is the Central England Temperature (CET), shown in the figure below, and it suggests that while 1816 was cold, there were also other years with colder or comparable summer temperatures. There is little reliable information to say whether the cold summers in England are part of a global phenomenon. We know today that England can have a cold summer without the rest of the planet being cold.

Claim: “Temperatures plummeted by up to 2C over 20 years, devastating the world’s food production.”

The implications of this sentence are misleading since it suggests that these changes are due to changes in solar activity. There are no convincing links between solar activity/cosmic rays and climate variations[1,3].

If there were a strong connection between solar activity and climate, that would indeed be interesting, as it would suggest that our climate is quite sensitive to external forcing. The climate sensitivity is influenced by amplifying feedback mechanisms, such as changes in snow/ice-cover (changed albedo) or changes in atmospheric humidity (water vapour is a greenhouse gas). However, many of these feedback mechanisms act on changes in temperature, and would play a role for any type of forcing—also anthropogenic forcing. In that sense, there is no reason to think that a sensitivity to solar activity would rule out sensitivity to greenhouse gases—quite the opposite.

The global warming trend in the last decades cannot be explained in terms of solar activity because there has not been any trend in solar activity. There is additional evidence that the trend cannot be due to galactic cosmic rays (GCRs) because (a) there has been no trend in GCRs, (b) the warming has been strongest during the polar night (winter in the Arctic) and at nighttime, where the mechanisms proposed for GCR is absent (changes in cloudiness and albedo), (c) there is no trend in the global albedo[4].

While there were volcanic eruptions coinciding with the Dalton Minimum, there is no evidence whatsoever to suggest that solar activity causes volcanic eruptions! The volcanic eruptions during that time, and in particular the eruption of the Tambora in 1815, did cause the climate to cool and affected harvests, but this had little to do with the low solar activity of the Dalton Minimum. Studies also show that most of the cooling was due to volcanic aerosols, and that even a prolonged solar minimum could not offset future warming from human greenhouse gas emissions[1].

Claim: “On April 10, 1815, the second largest volcanic eruption in 2,000 years happened at Mount Tambora in Indonesia, killing at least 71,000 people. It also led to the so-called Year Without a Summer in 1816 — also nicknamed “eighteen hundred and froze to death” — when there was snow in July.”

Again, these are the effects of the Mount Tambora eruption which has no connection to the low solar activity at that time.

There is no evidence we are headed into a grand minimum. With Cycle 25 predicted to be similar to Cycle 24 [2009-2020], we do not see anything approaching a grand minimum, at least not in the near future. What we cannot say is what Cycle 26 will look like—mainly because no one has a demonstrated method for predicting that far ahead.