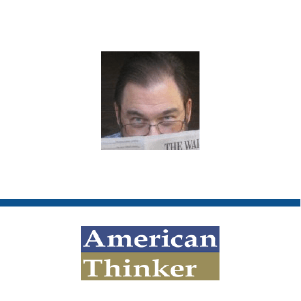 CLAIM
Sea level rise has been slow and a constant, pre-dating industrialization
VERDICT more about the rating framework

DETAILS
Factually inaccurate: Scientific studies clearly show that rates of sea level rise have increased since industrialization.
Misrepresents source: The article incorrectly describes results from a scientific paper published in Geophysical Research Letters (according to an author of that paper) to support its claim that sea level rise is slow and not caused by human factors.
KEY TAKE AWAY

Sea levels have risen at increased pace since industrialization, with the fastest rates of sea level rise occurring in the late 20th century. At local geographic regions, sea levels can rise faster or slower than the global average, and in the past, these local variations might have been large in magnitude. However, at the global scale, sea levels are rising at an accelerated rate due to human-induced global warming.

CLAIM: Sea level rise has been slow and a constant, pre-dating industrialization ... A study by the University of York found evidence for a period of enhanced pre-industrial sea-level rise of about 2-3 millimetres per year in three locations — Nova Scotia, Maine and Connecticut, which were largely natural, without any human constructions or man-made factors.

The claim that sea level rise has been slow and constant, pre-dating industrialization appeared in several outlets, including American Thinker and The Global Warming Policy Forum, going viral in March 2020 with nearly 8,000 interactions on Facebook. This claim contradicts ample scientific evidence showing that the rate of sea level rise has increased over time, as seen in the figure below. 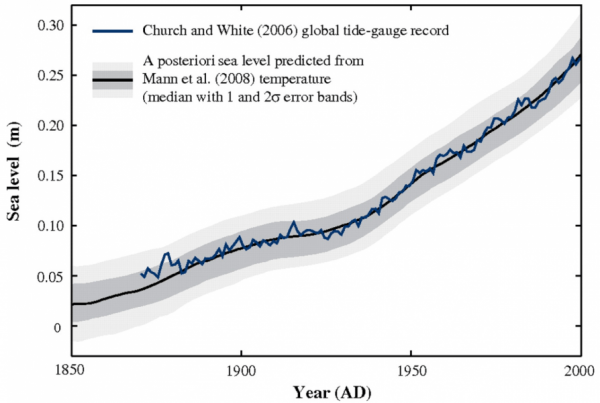 Figure – Sea level data from the US Atlantic Coast shows an overall rise from 1850 to 2000, with the fastest increases occurring in the 20th century. Adapted from Kemp et al. 2011[1].

Sea level rise is primarily driven by glacial ice melting and the expansion of seawater as it warms. Although natural factors such as land mass movements and ocean circulation patterns influence sea levels, human-induced climate change is accelerating the rate of sea level rise[2,4]. Specifically, greenhouse gas emissions have increased global temperatures, causing ice sheets to melt and oceans to thermally expand, as Margot Saher describes in the reviewer comments below.

Roland Gehrels, Professor, University of York:
The blog is a misrepresentation of our paper [published in GRL[2]]. Sea-level rise in our study area (the North American Atlantic coast north of Cape Hatteras) has been neither slow nor gradual nor constant. We found that sea-level rise in the 20th century was the fastest (at least in the last 3,000 years—this we also published in PNAS in 2016 in a paper led by Bob Kopp[3]) but there was also a rapid sea-level rise, albeit somewhat slower, in the 18th century. The rates in both centuries are not slow at all; there haven’t been any other centuries in the last 3,000 years that saw similar rates. Sea-level during most of the 19th century did not rise by much, so the sea-level rise is not constant either; there was a clear break between the 18th and the 20th century. What it all means is that there is an underlying natural mechanism in this “hotspot”, which we hypothesize is related to Arctic ice melt and the North Atlantic Oscillation. In the 20th century (and in the future) this mechanism operates IN ADDITION to anthropogenic forcing, which was significant and since 1970 has been the dominant control on global sea-level rise (e.g. Slangen et al. 2016[4]; Dangendorf et al. 2015[5]; Kopp et al. 2016[3]).

The last sentence [in our paper] is quite clear (my emphasis in bold here): Our findings suggest that enhanced rates of sea level rise along eastern North America are not only symptomatic of human activity, but might additionally arise from natural processes in the climate system.

Benjamin Horton, Professor, Earth Observatory of Singapore:
Please see the two papers that use a global dataset which clearly shows that the rate of [sea level rise] in the 20th century is faster than anything of the past 2000 and 3000 years respectively[1,3].

Jonathan Gregory, Professor, University of Reading and UK Met Office Hadley Centre:
I would say that the article in American Thinker is a misrepresentation of the state of science. Furthermore, Dr. Singer’s conclusion (in his second paragraph) is completely untrue. The GRL paper cited[2] doesn’t say anything about the causes of 20th-century global-mean sea-level rise. They are about sea-level change in a particular location. For the global mean, it is generally accepted that 20th-century sea-level change is partly anthropogenic and partly natural[5]. A substantial part of it is due to contraction of glaciers worldwide, beginning before the 20th century, and not likely to be anthropogenic. However, the increasing rate of glacier retreat and warming of the ocean, causing thermal expansion, is probably anthropogenic[4]. It is also generally accepted that sea-level in any particular location can show considerably different trends from the global mean, even for long periods, because of unforced variability in the climate system[3].

Margot Saher, Lecturer, Bangor University, Wales, UK:
Sea level is not level. Global sea level rises due to thermal expansion and ice melt, but neither of these processes leads to the same amount of sea level rise all over the globe. There are many aspects that cause this: vertical land movement, ocean currents, wind patterns, etc. Gehrels and Long wrote a good introductory text on that, be it applied to the UK[6].

That sea level is rising should surprise nobody; rising CO2 levels in the atmosphere lets the same amount of solar energy in, while letting less long-wave radiation out. It’s a question of simple physics that means the Earth system is warming, which leads to the oceans thermally expanding and ice bodies melting. And these effects have been extensively documented[7-10].

That sea level is not only rising but also accelerating has been found in a plethora of records, both from tide gauges (see figure above)[11,12], satellite measurements[13,14], proxy records[2,15] and combinations thereof[16-18]. The important thing here is that the global average records[17,12] show this increase, as when looking at individual reconstructions, the signal can be dominated by local effects.

When looking at an individual record it is important to see it in context. One could, for example, look at the Stockholm tide gauge record (available on PSMSL.org); this shows a sea level drop. Does that prove that sea level isn’t rising at all? No, it means that Sweden is rising up after having been pushed down by the ice sheets of the last glacial period. Does a period of rapid pre-industrial sea level rise on the US east coast, as seen in Gehrels et al. (2020)[2], mean that sea level rise isn’t accelerating? Of course not. It just means that the various factors that determine sea level at that location can result in much more than average sea level rise there, and have done so in the past. This can happen again. And this means its citizens would be well-advised to be even better prepared for future sea level rise than people living in other areas along the US east coast.

Let’s start with the title: ‘New study shows sea level rise has been slow and a constant, pre-dating industrialization’. That statement is wrong, and does not come from the article it’s based on. A comprehensive 2016 study unambiguously shows using proxy and modern sea-level records that 20th-century global-mean sea-level rise is larger than during any century over the past 3000 years[3].

The scientific article the text refers to sea level along the US East Coast, which is not representative for global sea level at all. Over the last 60 years or so, sea-level rise along the US East coast has been accelerating much faster than the global mean, and is therefore often called a sea-level hotspot[19]. There’s a lot of discussion of its causes[20], and it is not yet known whether this anomaly is human-caused or not. So, the article discusses an anomaly in regional sea level. Regional sea level often deviates a lot from global sea level, so this anomaly does not say much about the global mean sea level, and definitely not about sea level on Pacific islands mentioned in the article. The new study shows that similar anomalous acceleration patterns have happened during the 18th century as well, which implies that the anomalously high rate of sea level along the US east coast is not an indicator of anthropogenic climate change per se. Since this large acceleration comes on top of the global rise in sea level due to climate change[4,5], this study does not refute at all anthropogenic sea-level rise, and the news article deliberately frames it that way, despite the clear message in the conclusions:

“Our findings suggest that enhanced rates of sea‐level rise along eastern North America are not necessarily symptomatic of anthropogenic forcing, as was argued in past work[19], but might arise from other forcing mechanisms in the coupled climate system. Our results also suggest that these multidecadal‐centennial periods of low or high sea level might dampen or amplify any future sea‐level signal that is generated by greenhouse‐gas forcing, and should be taken into account in projections of future coastal vulnerability and risk.”

It’s in a sense similar to saying after a very hot summer, that because in the 18th century, we also had some hot summer that the climate isn’t changing.

Finally, the concluding takeaways are all factually wrong: “The takeaways include the realization that sea level rise is gradual and has been going on for centuries, may or may not be related in some small way to CO2 emissions, and can be adapted to because it is so slow.”