Seven scientists analyzed the article and estimated its overall scientific credibility to be ‘very high’. more about the credibility rating
A majority of reviewers tagged the article as: Accurate, Insightful, Sound reasoning, Unbiased. 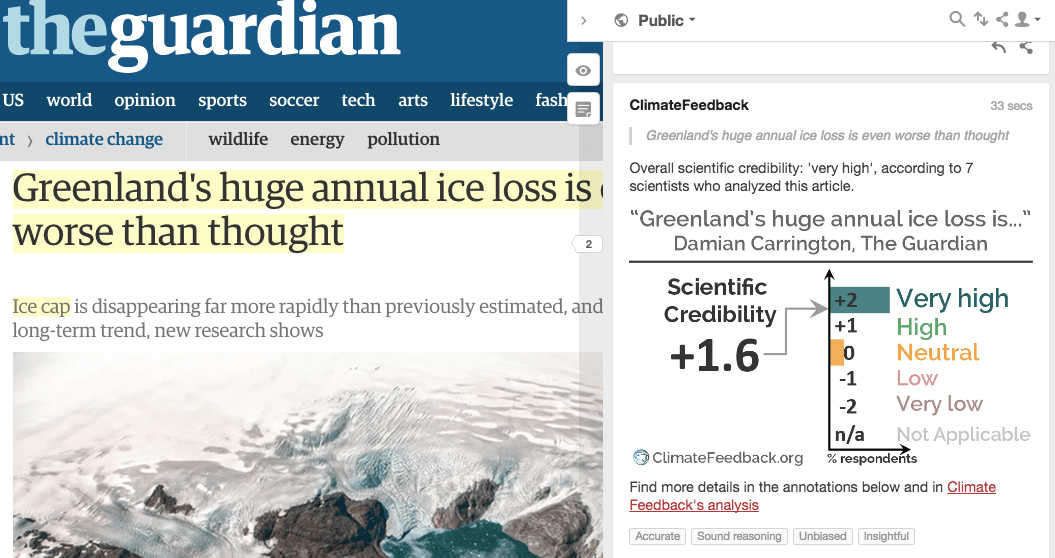 Damian Carrington’s article in the Guardian is an accurate summary of a new study advancing estimates of ice lost from Greenland. One of the factors that must be accounted for when monitoring the size of the great ice sheets of Greenland and Antarctica is the vertical motion of the land beneath the ice due to geological forces. The Earth’s crust is depressed under the weight of a growing ice sheet, and will rebound upwards as the ice sheet shrinks. Carrington’s article describes a new study finding greater “crustal rebound” in Greenland, which means some methods of estimating the loss of Greenland ice will have underestimated that loss.
The reviewers pointed out that, while this work is important, it doesn’t constitute as much of a breakthrough as is suggested in the article, but mostly confirms that the rate of Greenland ice melt is now 3 times what it was before the industrial revolution.

Niels Jákup Korsgaard, Postdoctoral research fellow, Nordic Volcanological Center, University of Iceland:
While I would have preferred a slight moderation of the headline (replace ‘worse’ with e.g. ‘greater’ or ‘larger’) I find the headline accurate and supported by the article. The article explains the novelty and impact of the research accurately for the general readership and in particular the context provided from the scientists works really well in this regard.

Martin Truffer, Professor, University of Alaska Fairbanks:
The article might not explain the relevance of this work all that well, but there is really nothing controversial being presented here. The Science article presents some important new measurements, but there is no fundamental difference to what we understand about how the icesheet works.

Allen Pope, Research Associate, National Snow and Ice Data Center, University of Colorado Boulder:
The article does a good job of accurately portraying and providing insight to the science. A clearer focus on the different timescales involved might have improved it, but it is very good.

Lauren Simkins, Assistant Professor, University of Virginia:
Carrington’s article is a succinct and accurate assessment of past and present ice mass loss from the Greenland Ice Sheet that is supplemented by insightful comments from scientific experts.

The statements quoted below are from Damian Carrington; comments and replies are from the reviewers.
1. A new estimate of the vertical motion of Greenland’s land surface implies that some monitoring of the Greenland ice sheet has slightly underestimated recent ice loss, which has accelerated due to human-caused warming.

“the rapid ice loss recorded by satellite measurements over the last 20 years is not likely to be a blip, but part of a long-term trend being exacerbated by climate change. Global warming is driving major melting on the surface of Greenland’s glaciers and is speeding up their travel into the sea.”

Niels Jákup Korsgaard, Postdoctoral research fellow, Nordic Volcanological Center, University of Iceland:
While this paragraph is not imprecise, there is a slight wiggle room for the wrong interpretation that the acceleration of ice loss seen in the past decades is just a “blip” on top of a much larger rate of mass loss since the Last Glacial Maximum (LGM). This new work finds the contribution to sea level rise from the Greenland Ice Sheet since the LGM to be 4.6 ± 0.7 m – an average ice loss rate of roughly 75-80 Gt/yr, which is almost identical to the rate of ice loss in the 20th century (75 Gt/yr) suggested by Kjeldsen et al. (2015). The rate of ice loss has accelerated in the past decades so that we today see rates that are more than the triple of those earlier rates. However, I do not think this is a major issue, as the paragraph is sandwiched in between precise explanations and context provided by scientists.

Allen Pope, Research Associate, National Snow and Ice Data Center, University of Colorado Boulder:
Yes, there are two processes going on here: 1) changes still happening in the solid Earth from the last ice age and 2) current changes to the Greenland ice sheet. The former is impacting our ability to measure the latter.

“Previous satellite estimates of modern ice losses tried to take this into account, but precise new GPS data showed much of Greenland is rising far more rapidly than thought, up to 12mm a year. This means 19 cubic kilometres more ice is falling into the sea each year, an increase of about 8% on earlier figures.”

Niels Jákup Korsgaard, Postdoctoral research fellow, Nordic Volcanological Center, University of Iceland:
When scientists use modern data from e.g. satellite gravity measurements to estimate present-day ice loss, we need to correct for land uplift. Because the satellite sees that mass is changing below, but it cannot tell what is due to land motions and what is due to ice loss. The huge Sumatra earthquake caused huge land displacements and changed the gravity field. But for Greenland, changes in gravity are both due to land displacements and ice mass “displacements” or “ice loss”. This new paper solves the problem by using direct GPS measurements of land displacements.

Ian Joughin, Affiliate Professor, University of Washington:
It’s a nice study, but the 20GT/yr represents less than 10% of the observed signal and is well within the uncertainty of those measurements (263+/-30 Gt/year – 2005-2010 loss from Shepherd et al, 2012).
Moreover, it’s not clear how well sparsely sampled points constrain their estimates, so there is some uncertainty on the 20Gt/yr (it could be more or less).
So while we are always striving to improve measurements of ice sheet mass loss, and this is a step in the right direction, it doesn’t produce any fundamental change in the current estimates of rates of loss from the Greenland ice sheet.

Allen Pope, Research Associate, National Snow and Ice Data Center, University of Colorado Boulder:
It might be worth noting that only some satellite estimates need to take this into account. Especially gravity-based mass change recoveries will be impacted while elevation-change or input/output methods will not. Projects like IMBIE intercompare different methods to build consensus among them.

2. The loss of ice from the Greenland Ice Sheet is a major source of global sea level rise , after thermal expansion of ocean water and melting mountain glaciers outside the polar regions.

“The melting Greenland ice sheet is already a major contributor to rising sea level and if it was eventually lost entirely, the oceans would rise by six metres around the world, flooding many of the world’s largest cities.”

W. Tad Pfeffer, Professor, University of Colorado:
This number [six meters] is quoted in virtually every article published about Greenland (in media and science literature!). It’s really an irrelevant number, and without any context can be very misleading, as it is here. The total loss of the Greenland ice sheet may not happen under any reasonable future scenario, and in any case would take many thousands of years to occur. A more meaningful number would be the current estimate of what the net loss might be by 2100; this could then be given as a percentage of the total ice volume on Greenland, but for the purposes of an article like this, where the reader is thinking about human consequences, quoting the total ice volume will only confuse the issue.

Note: While the term “ice cap” is commonly used to refer to several different types of polar features, it technically refers to much smaller areas than Greenland, which should be called an “ice sheet”.

“Ice cap is disappearing far more rapidly than previously estimated, and is part of a long-term trend, new research shows”

Twila Moon, Research Scientist, University of Colorado, Boulder:
Again, “ice sheet” is more accurate than “ice cap”. In general, the term “ice cap” is not used in scientific literature. As a result, I think its use is confusing in the media, too, as people have a hard time understanding if it refers to ice sheets (thick ice on land) or sea ice (which are very different!).