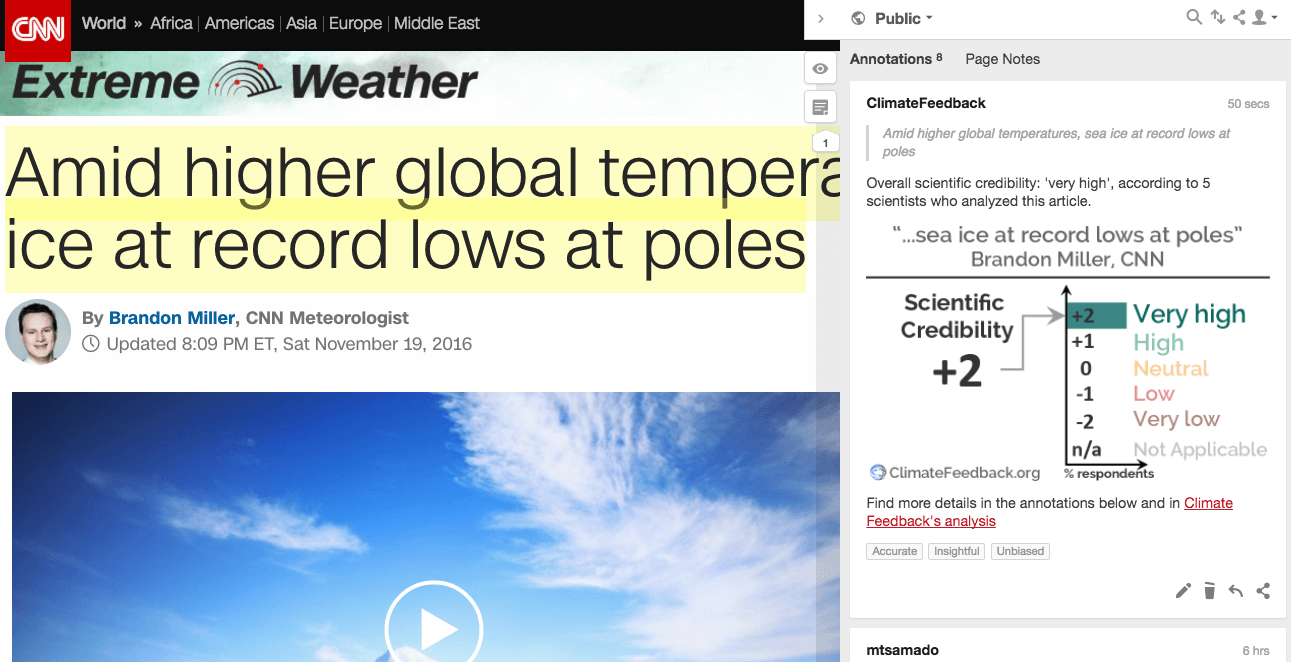 This CNN article discusses the unprecedented recent warm sea surface and air temperatures leading to the record low Arctic extent. It also explores the potential influence this long-term trend of sea ice loss may have on the polar vortex and weather patterns in the midlatitudes.

Scientists reviewing the article found that it is an accurate and insightful summary of current scientific knowledge, which indicates that warming is driving a long-term decline in Arctic sea ice coverage—though sea ice at both poles is subject to shorter-term variability, as well.

Michel Tsamados, Lecturer (Assistant Professor), University College London:
The article does a good job of conveying our current understanding of the state of the sea ice in the 21st century.

The very low total Arctic and Antarctic sea ice extent in October 2016 is a clear outlier with respect to the last ~40 years. Such an extreme event is a combination of particular weather patterns in both hemispheres superimposed on the rapid temperature rise observed in the Arctic (at twice the global rate – the so called ‘polar amplification’).

Jennifer Francis, Senior Scientist, Woods Hole Research Center:
This is an excellent summary of the Arctic’s bizarre behavior recently and through most of 2016.

The statements quoted below are from Brandon Miller; comments and replies are from the reviewers.

1. Arctic sea ice extent is declining rapidly as a result of climate change. Antarctic sea ice is expected to shrink eventually as well, but has been so far more influenced by natural variability.

“While record low sea ice is nothing new in the Arctic, this is a surprising turn of events for the Antarctic. Even as sea ice in the Arctic has seen a rapid and consistent decline over the past decade, its counterpart in the Southern Hemisphere has seen its extent increasing.”

James Renwick, Professor, Victoria University of Wellington:
Exactly. The “upward trend” has been big news, but in the last two years, sea ice extent around the Antarctic has taken a nose-dive. 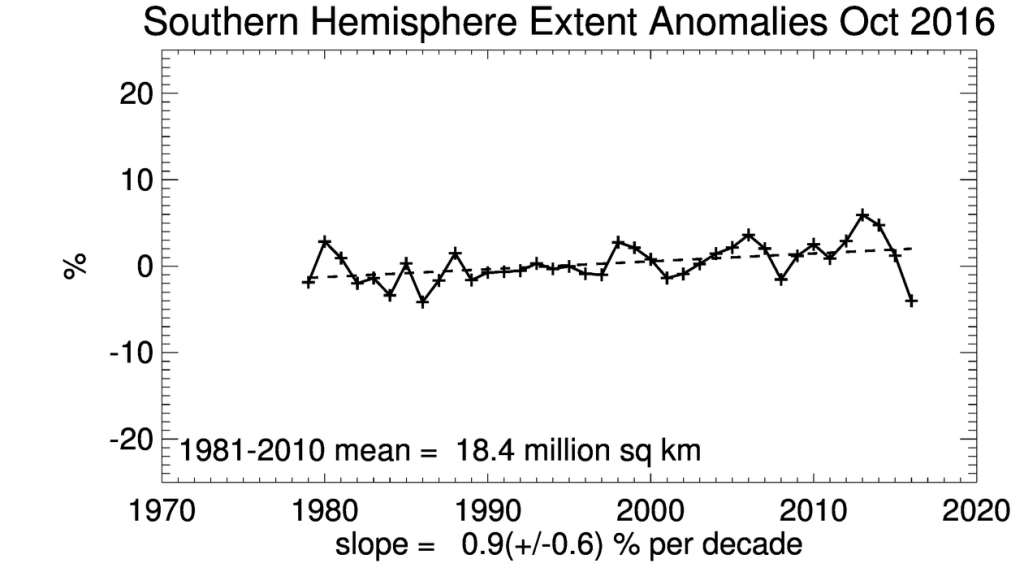 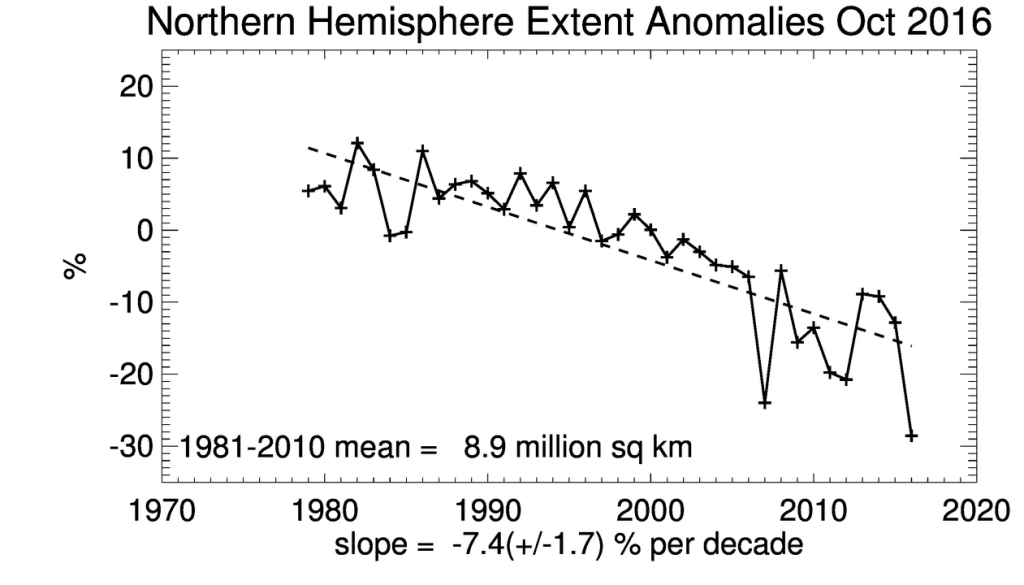 Sea ice extent anomalies for the months of October (1979-2016) in the Antarctic (up) and Arctic (down). Source: NSIDC

“Skeptics have long pointed to ice gain in the Southern Hemisphere as evidence climate change wasn’t occurring, but scientists warned that it was caused by natural variations and circulations in the atmosphere.”

Jan Lenaerts, Assistant Professor, University of Colorado, Boulder:
This is slightly confusing, since it can refer to either sea ice gain or land ice gain (which were both mentioned by “skeptics”). The sea ice gain since 2000 has been attributed to natural, decadal variability in the tropical Pacific*. Land ice gain is a false claim, and mostly refers to slight thickening of the East Antarctic interior, which is more than compensated by dynamic ice loss in West Antarctica.

“It “certainly puts the kibosh on everyone saying that Antarctica’s ice is just going up and up,” Meier said.”

Michel Tsamados, Lecturer (Assistant Professor), University College London:
I agree that the statement that Antarctic sea ice going up and up is a misconception when looked at over larger time scales.

On the other hand it is also true that over the satellite area Antarctic sea ice has increased in extent (a bit) every month of the year (see NSIDC time series) October is probably the month with the weakest positive trend.

Therefore I believe that it is more important to explain that while the transient response of Antarctic sea ice is more complex than in the Arctic, the end state (equilibrium) is also one with polar amplification, increased temperatures and sea ice decline, in both hemisphere.

“For what appears to be the first time since scientists began keeping track, sea ice in the Arctic and the Antarctic are at record lows this time of year.”

Michel Tsamados, Lecturer (Assistant Professor), University College London:
While we have a very clear picture of the sea ice concentration only over the satellite era (1979-present) there are other measurements available that are more or less direct, ranging from whaling and shipping log books (showing higher sea ice extent over the past 100 years) to paleo-climate reconstruction (proxies) over thousands to million of years. [more about ‘polar amplification’ in past climate]

“It’s far too early to tell if what we are seeing in the Arctic, and now the Antarctic, is a sharp shift towards warmer poles with less ice. Scientists are quick to point out that weather in these regions can change quickly, but this is another expected result of climate change.”

Julienne Stroeve, Senior Research Scientist, University College London:
Certainly the loss of sea ice is largely a result of warming from increased atmospheric concentrations of CO2. So it’s not surprising to see the changes in the Arctic. Climate models also predict that Antarctic sea ice will decline eventually, especially once the ozone hole recovers. There is some evidence* that the ozone hole has led to stronger circumpolar winds that spread the Antarctic sea ice cover out from the continent and since there is no land to bound the sea ice (like in the Arctic) it can expand towards the equator until it reaches warmer ocean temperatures.

2. The current lack of Arctic sea ice growth can be partly explained by the “ice-albedo” feedback—the fact that with less sea ice, the exposed ocean water is able to absorb more solar energy, accelerating the warming and melting process.

“‘The interaction between Arctic ocean temperatures and the loss of ice formation leading to continuing record minimums is clearly a climate change signal,’ said Thomas Mote, a geography research professor at the University of Georgia.”

James Renwick, Professor, Victoria University of Wellington:
Yes. The “ice-albedo feedback” has been evident in the Arctic for some years, contributing to “polar amplification”—the effect where polar latitudes warm at around twice the rate of the globe as a whole.

“Temperatures in the Arctic have soared recently, and scientists are struggling to explain exactly why.”

Jennifer Francis, Senior Scientist, Woods Hole Research Center:
The only quibble I have with this article is this statement. I’d say that we have a fairly good understanding of the causes of this warm episode. As mentioned in the article, a very diminished ice cover this summer allowed additional solar energy to be absorbed by the Arctic Ocean, which is then released back to the atmosphere in fall that in turn retards refreezing. Additional moisture is also evaporated from the open ocean, which not only traps additional heat as a greenhouse gas, but also tends to form more clouds that also trap heat. An unusually wavy jet-stream pattern has also transported extra heat and moisture from lower-latitude regions into the Arctic, adding to the warmth. We know many self-reinforcing mechanisms operate in the Arctic, so when some heat shows up there (think greenhouse gases, moisture, etc.), its effects are amplified. This has been understood for a long time, but perhaps the pace of this warming is somewhat unexpected.

“To make matters worse, the water temperatures in the Arctic Ocean are several degrees above average, which is an expected result of having less sea ice.”

Julienne Stroeve, Senior Research Scientist, University College London:
Generally, the absorbed solar radiation leads to enhanced ocean temperatures in the mixed layer, so with summers of less ice the ocean mixed layer temperatures are usually warmer than average. Though even that is more driven by the timing of when the sea ice retreats. If it retreats early in the melt season when the sun is still high in the sky then you get more ocean warming, but if like in 2012 the ice retreats rapidly in August, it doesn’t have the same impact on ocean temperatures because the sun is already starting to set. But while this may be part of the explanation for warmer ocean temperatures at the moment, in the Barents Sea it is actually a result of warm Atlantic waters entering the Arctic. I have spoken with oceanographers about this and the sea surface temperature anomalies are a result of stronger inflow to the Barents Sea and along the west coast of Svalbard. The strong northwards flow of Atlantic water is also consistent with the more southerly winds this November that have helped to bring in warm air temperatures.