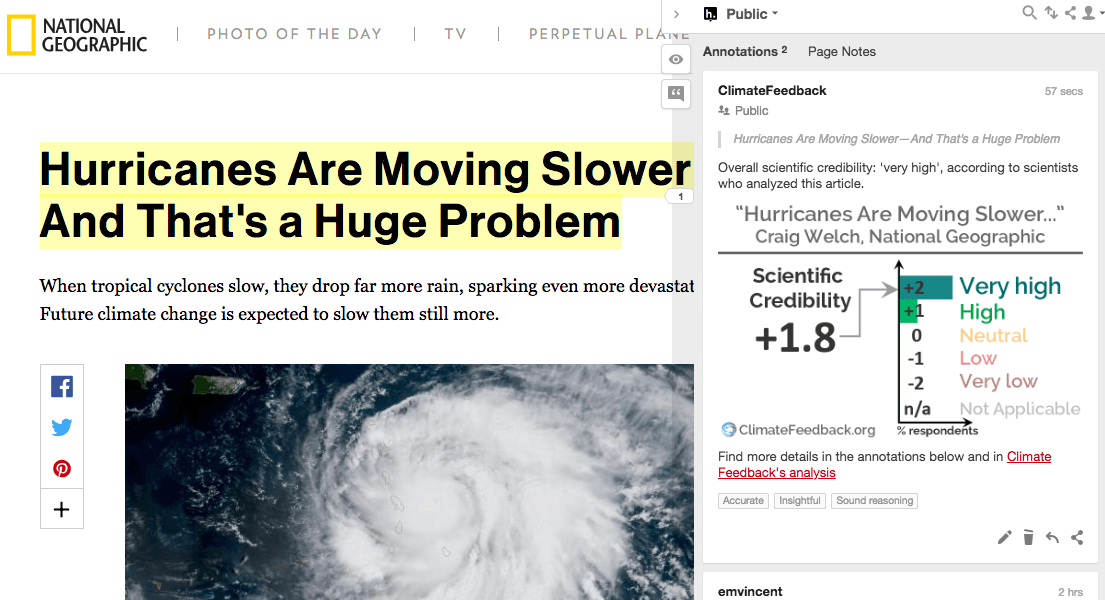 This National Geographic article covers a result reported in two recent studies: global warming seems to be causing the movement rate of hurricanes to slow. One study shows this trend in data going back to about 1950, while the other simulates hurricanes in an even warmer world using a climate model. While the process responsible for this trend needs to be studied further, it could be due to a general slowing of winds in areas where hurricanes exist due to differences in warming rate between low and high latitudes.

Scientists who reviewed the article concluded that it does a good job of placing the finding in context and asking input from scientists with expertise on the topic for validation.

Dan Chavas, Assistant Professor, Purdue University:
This is an important topic and the article explains the new research findings clearly and in terms that can be understood by laypeople. Highlighting how this result about slowing storms is consistent across two studies that employ very different methodologies further helps convey to the public how we try to use multiple lines of evidence to understand how our world works and how it may chance in the future.

Kerry Emanuel, Professor of Atmospheric Science, MIT:
The story accurately conveys the essence of the original paper by James Kossin.

Emmanuel M Vincent, Research Scientist, University of California, Merced: Emmanuel Vincent, Research Scientist, University of California, Merced:
The National Geographic article covers two new scientific studies that provide evidence that ongoing global warming is decreasing the translation speed of hurricanes. One study shows a 10% reduction in observed translation speed between 1949 and 2016 while the second finds a ~10% reduction in translation speed of two dozen hurricanes simulated in a warmer future by the end of the 21st century. The fact that two independent studies using different approaches corroborate the finding increases the confidence one can have in this surprising result, even though it remains to be validated further.

The article correctly emphasizes a more strongly established scientific result: that hurricanes drive significantly more rainfall in a warmer climate, which is a major aspect of their destructiveness.

Karthik Balaguru, Scientist, Pacific Northwest National Laboratory:
The findings from the study are consistent with the idea of a slowdown of the Hadley circulation in response to global warming. However, it’ll be interesting to see if similar trends are obtained when using hurricane track data over the satellite period, when the data is more accurate. One of the main points of the article is that the slowdown of hurricanes is occurring over land, which can certainly have serious implications. But over the ocean, which has roughly 90% of the data, the impacts of a slowdown are not entirely clear to me. For instance, it is known that slower hurricanes create a stronger cold wake and hence become more susceptible to ocean feedback. How this may influence the intensity of the storms needs careful evaluation.

Kerry Emanuel, Professor of Atmospheric Science, MIT:
“Huge” may be an exaggeration.

“While having a cyclone travel with less speed may seem like a good thing, it’s actually just the opposite. Wind speeds within the storm remain high, but the whole system itself moves slower across the landscape, allowing punishing rains to linger longer over communities.”