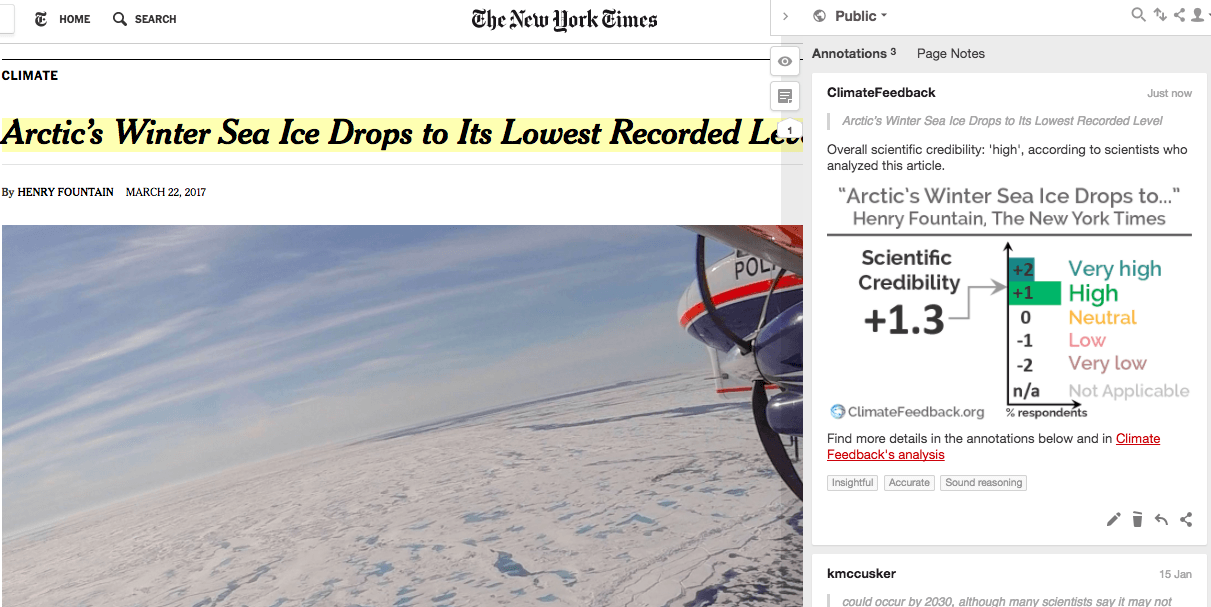 This March 2017 story in the New York Times described the record low extent of Arctic sea ice at its annual maximum. Scientists who reviewed the article found it to be accurate and informative, with only a couple details that could potentially be further clarified.

Caroline Holmes, Polar Climate Scientist, British Antarctic Survey:
The article accurately reports on the state of Arctic sea ice at the annual maximum (in March) and its causes, and gives an insightful discussion as to the implications. There is one point which may be misleading: when scientists refer to the Arctic being “ice-free” in summer they specifically mean sea ice extent below a threshold of 1 million square kilometers (386 thousand square miles). This is not made clear in the article and is an important distinction.

Nathanael Melia, Postdoctoral research fellow, University of Reading:
Both of the scientists interviewed are highly respected in their field and are from world leading institutions in polar research.

“Dr. Serreze said that such a situation, which would leave nothing but open ocean in summer until fall freeze-up begins, could occur by 2030, although many scientists say it may not happen for a decade or two after that.”

Kelly McCusker, Research Associate, Rhodium Group and Climate Impact Lab:
2030 is on the early side of ice-free predictions but definitely not out of the realm of possibility.

“Less ice coverage also means that there is more dark ocean to absorb more of the sun’s energy, which leads to more warming and melting in a feedback loop called Arctic amplification.”