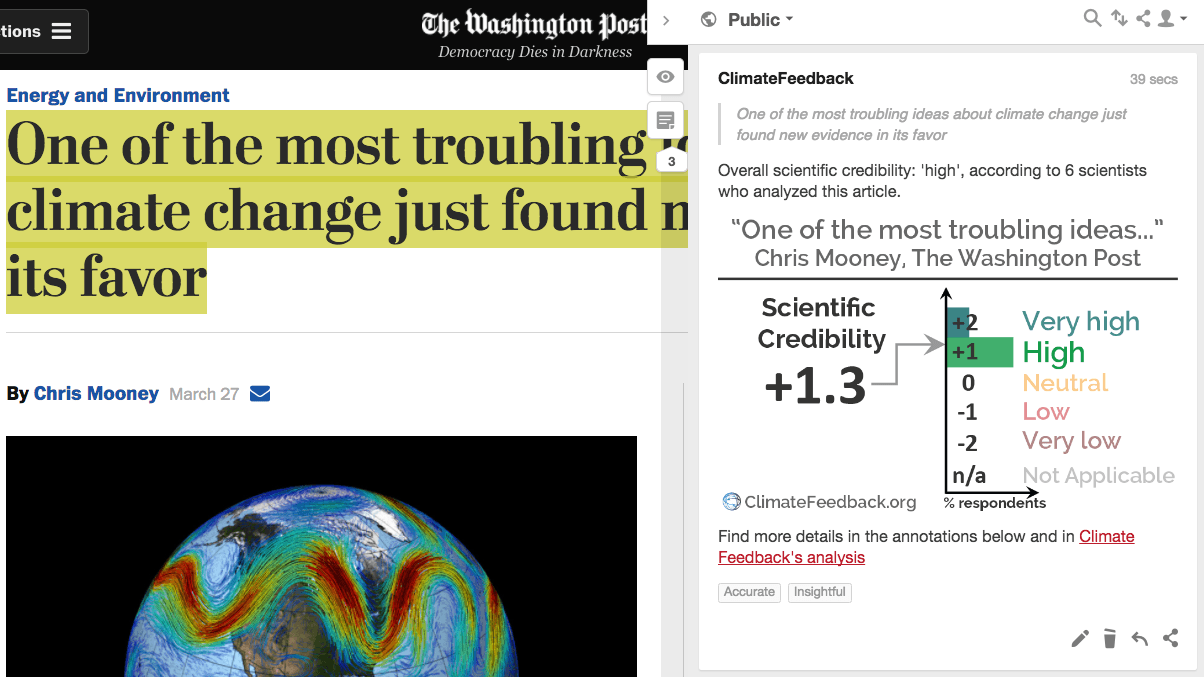 This article in The Washington Post discusses a new study related to the hypothesis that global warming is influencing extreme weather events in the midlatitudes by changing the behavior of the jet stream.

While many previous studies have explored statistical correlations, the new study provides a specific process that can plausibly explain how enhanced Arctic warming trends may trigger remote weather impacts. Specifically, it focuses on slow-moving meanders in the jet stream in the spring and summer than can cause extended periods of hot or wet weather.

The scientists who reviewed the article confirm that it is accurate and insightful, and acknowledges the areas where legitimate scientific uncertainty remains.

James Screen, Associate Professor, University of Exeter:
The author does a pretty good job of summarising the state of the science on this topic and the main advance made by the new Mann et al study. It conveys some of the uncertainty and difficulties in attributing changes in the jet strea—and in “stuck” weather patterns—to man-made climate change. It is worth noting that the Mann et al study only claims a climate change effect on the jet stream in summer. However, much of the research referred to in the article is about winter and invokes different physical processes to explain the possible climate change effects on the jet stream. My ranking of “high” rather than “very high” reflects the failure of this piece to fully capture the seasonal nuances of possible connections between climate change and the jet stream.

Jennifer Francis, Senior Scientist, Woods Hole Research Center:
The new study addresses a very complicated topic in dynamic meteorology and climate science, and this article does an excellent job of explaining the main idea and its implications. It is balanced, accurate, and well written.

Jim Kossin, Research Scientist, NOAA's Center for Weather and Climate:
Excellent article that should be very informative for a broad audience. There are a few somewhat misleading statements that place too much emphasis on the ongoing debate about how winter storms may be linked to Arctic warming, which are not directly addressed in the new paper by Mann et al. The new results might be inferred indirectly to favor one side of the debate, but this may prove to be incorrect later.

Daniel Swain, Climate Scientist, University of California, Los Angeles:
Overall, this piece accurately describes the findings of a new research paper by Mann et al on linkages between rapid Arctic warming and extreme weather at Earth’s more temperate latitudes. While there are a couple of statements that are overly confident given available evidence in the peer-reviewed literature, the author generally does an excellent job placing this new work into the broader context of related studies over the past decade.

Christopher Colose, Research Scientist, SciSpace LLC, NASA Goddard Institute for Space Studies:
The relevant framing concerning this work is not in gauging its “credibility,” since the research is sound and at the frontier of our knowledge of the topic. It will not, however, be the last word on the subject.

The subject of how climate change affects mid-latitude weather at the synoptic scale (roughly the scale of ~1000 kilometers, i.e., smaller than the tropical scale circulation such as the Hadley cell, but much larger than a tornado for instance) is complex for a number of reasons.

One reason is that these are some of the “noisiest” regions on the planet, somewhat less so in summer than in winter, but still subject to considerable internal variability. Therefore, for problems at the synoptic scale, it is often the case that initial condition uncertainty is of more importance than the expected forced component. Indeed, it is well known that 50 realizations of weather in a suite of model runs will not be in phase with reality’s weather, but even decadal trends in dynamical aspects of the mid-latitude atmosphere may differ among the 50 individual members of the model ensemble.

Tim Woollings, Lecturer, University of Oxford:
This article has reported on this story well. The ideas in the new study are interesting, but much more detailed work on this is required in the future. I agree with the quote from John Fyfe that this study is really at the start of something rather than the end. I think climate scientists in general have very diverse views on this theory, but this is well reported in this article.

As the climate warms, the Arctic is warming faster than the rest of the globe, potentially impacting the strength of the jet stream, which would have implications for midlatitude weather extremes. However, uncertainty remains regarding the magnitude and mechanisms of this effect, as it is at the frontier of scientific knowledge.

“The Northern Hemisphere jet stream […] flow is stronger when that temperature difference is large. But when the Arctic warms up faster than the equator does […] the jet stream’s flow can become weakened and elongated. That’s when you can get the resultant weather extremes.”

Daniel Swain, Climate Scientist, University of California, Los Angeles:
This is an accurate and succinct description of the primary hypothesized mechanism involved in the Arctic/mid-latitude weather linkage.

“Ever since 2012, scientists have been debating a complex and frankly explosive idea about how a warming planet will alter our weather — one that, if it’s correct, would have profound implications across the Northern Hemisphere and especially in its middle latitudes”

Jim Kossin, Research Scientist, NOAA's Center for Weather and Climate:
This is a somewhat misleading intro. The debate has been focused on winter storms (as Mooney discusses below), and these new results are strictly for boreal summer/spring.

Daniel Swain, Climate Scientist, University of California, Los Angeles:
This claim is somewhat overly confident given the available evidence. Observational studies (e.g. Francis and Vavrus 2015*) do indeed suggest that the “waviness” of the jet stream and subsequently the propensity for weather patterns to become more persistent has increased in certain regions and during certain seasons, although this is not universally true. There is also emerging evidence that the rapid warming of the Arctic may be playing a role in creating the conditions favorable for weather patterns to become “stuck in place”—a hypothesis that the new Mann et al. 2017* paper discussed in the article supports. The connections between amplified Arctic warming and mid-latitude weather extremes remains a very active area of scientific research (Overland et al. 2016*), however, and considerable uncertainty regarding the magnitude and mechanisms of this effect remain.

“This basic idea has sparked half a decade of criticism and debate, and at the cutting edge of research, scientists continue to grapple with it. And now, a new study once again reinforces one of its core aspects.”

Daniel Swain, Climate Scientist, University of California, Los Angeles:
This is an accurate framing of the (sometimes contentious) ongoing scientific conversation regarding linkages between Arctic warming and mid-latitude weather.

“‘This study goes beyond statistical correlations and explores a specific process that can plausibly explain how enhanced high-latitude warming trends may trigger remote weather impacts,’ he said.”

Jim Kossin, Research Scientist, NOAA's Center for Weather and Climate:
Yes, this is the key here. The study is a step toward physically reconciling a linkage that’s only been described statistically.

“But other scientific authors have expressed considerable skepticism of these kinds of ideas in the past. A recent study in Nature Geoscience, for instance, called into question whether the Arctic’s melting, and in particular its sea ice loss, has been causing winter cooling over Eurasia, another idea that has been swept up in the debate over the jet stream and weather extremes.”

Jim Kossin, Research Scientist, NOAA's Center for Weather and Climate:
Again, the debate has been about Arctic amplification and winter storm behavior, so this is somewhat misleading. It gives the impression that the new study tacitly pushes the debate about the winter storms toward the Francis/Vavrus side.

“‘I do not believe that this theory is fully developed or that the implications have been fully explored, but I do think that Mann et al. study is a very good start.’”

Christopher Colose, Research Scientist, SciSpace LLC, NASA Goddard Institute for Space Studies:
I agree with this. There are many competing components involved in how the jet stream will change in the future, and changing pole-to-equator temperature gradients is just one (in fact, the pole-to-equator temperature gradient increases near the tropopause, complicating the physics). Elizabeth Barnes and James Screen have a good essay here that serves as a useful entry point into these complications.

Jennifer Francis, Senior Scientist, Woods Hole Research Center:
I disagree that the study is only a beginning. The hypothesis that connects quasi-resonance with summer extreme weather, along with evidence to support it, began with Petoukhov et al (2013)*, which was then expanded upon by Coumou et al (2014)*, Kornhuber et al (2016)*, Petoukhov et al (2016)*, and now Mann et al (2017)*. Clearly there is more to learn, but in my view, we are well down the road to understanding this mechanism and identifying its signature in extreme weather.