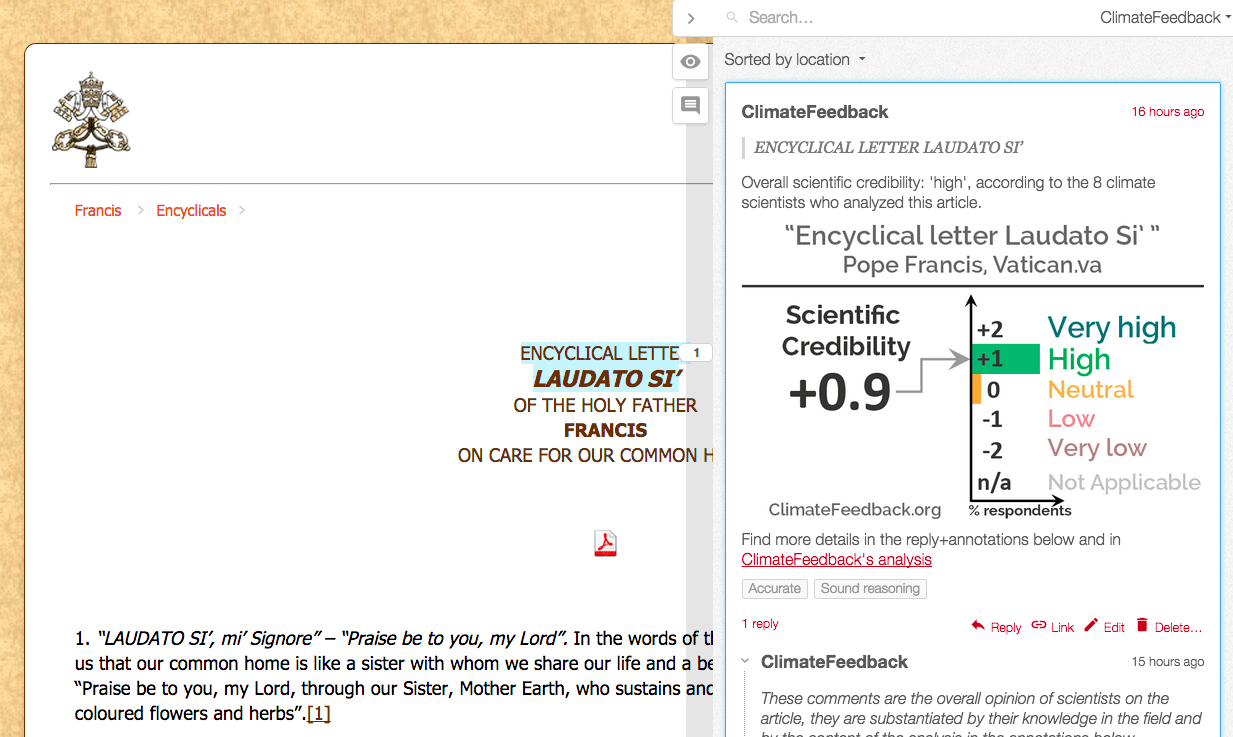 * Note that scientists only assessed information related to climate science. The following analysis is not an endorsement of the economic, political, or moral content of the encyclical.

Pope Francis’s encyclical rather accurately depicts the current reality of climate change. While it does contain a few minor scientific inaccuracies, and could be interpreted as understating the degree of certainty scientists have in understanding climate change impacts, the encyclical fairly represents the present concerns raised by the scientific community.

UPDATE (25 May 2017): The Encyclical has been edited, clarifying one of the statements that scientists had highlighted here. The problematic statement initially read “Concentrated in the atmosphere, these gases do not allow the warmth of the sun’s rays reflected by the earth to be dispersed in space” and has been updated to “As these gases build up in the atmosphere, they hamper the escape of heat produced by sunlight at the earth’s surface“.

Kerry Emanuel , Professor of Atmospheric Science at MIT
The Pope’s encyclical is strongly aligned with the scientific consensus about the reality and risks posed by global warming. The most striking feature of the encyclical is its linking of environmental degradation to cultural and political decline, painting it as a moral issue, not just a practical problem.

Alexis Berg, Research Associate, Harvard University:
In the few passages dealing with climate science, this text does not contain major scientific inaccuracies – but it does contain some minor ones, or at least some poor choices of words. The presentation of some elements (e.g., the scientific consensus on the attribution of observed climate change) is not as clear as it could be.

Andreas Klocker, Physical Oceanographer, University of Tasmania:
Some facts are a bit oversimplified (but not wrong), but in general a good article written for a very broad audience.

Dasvinder Kambo, PhD Candidate, Queen’s University
Note: I only read Chapter 1 of the encyclical.
I found Chapter 1 to be a great representation of ‘popular’ scientific understanding of the effects of climate change. However, there could have been more input on the interactions of how humans in one country influence humans in others (i.e. Fossil fuel production in North America / China decreasing rainfall in west Africa/India).

Britta Voss, Postdoctoral Research fellow, U.S. Geological Survey:
The purpose of this document was not to provide a technical description of climate science, however, the evidence presented in support of the anthropogenic footprint of environmental problems in general and climate change in particular was overall accurate and relevant.

Sarah Perkins-Kirkpatrick, Research Scientist, Climate Change Research Centre, The University of New South Wales:
Most of the encyclical is reasonably accurate, though there are a few careless statements that could have been better explained. In general, the current scientific view is reasonably well summarized.

Jean-François Exbrayat, Post-doctoral Research Fellow, The University of Edinburgh:
The encyclical is a good summary of human pressure on ecosystems and associated societal concerns. It is based on a state-of-the-art scientific knowledge of these issues although some statements are imprecise.

Jonathan Lauderdale, Postdoctoral Research Associate, MIT:
The Encyclical summarized the current state of climate science well, in conjunction with a raft of other issues related to human exploitation of the natural environment.
The key part of this document is bridging the gap between the scientific observations that we make, which often do not engage the public’s attention, and the moral implications of humans as guardians of our planet (whether you are religious or not, this still makes sense).
As a specific point, I think the Encyclical could have been more definitive in attributing recent climate change to anthropogenic factors – mentioning the natural forcings in the context of warming seemed to be uncharacteristically overcautious.

Mark Eakin, Scientist, Coordinator of NOAA’s Coral Reef Watch, National Oceanic and Atmospheric Administration:
This encyclical is beautifully written and largely captures the scientific consensus. It is a bit too conservative in places, especially in terms of the amount of climate change attributed to humans.

“In recent decades this warming has been accompanied by a constant rise in the sea level and, it would appear, by an increase of extreme weather events, even if a scientifically determinable cause cannot be assigned to each particular phenomenon.”

Sarah Perkins-Kirkpatrick, Research Scientist, Climate Change Research Centre, The University of New South Wales:
It depends on the type of event. heatwaves and extreme heat events have increased since at least the 1950s1.

Though tropical cyclones and drought are a bit harder to analyse since natural climate variability also plays a large role. This means there may be a signal of change due to human activity, but is more difficult to measure, due to the noise of the natural variability of the climate.

Also, “attribution” can be done for specific events. this basically compares how often an extreme event of a particular magnitude and duration occurs in climate model simulations both with and without human emissions of greenhouse gases. This was first done on the 2003 European heatwave2. So it can be done, but is heavily dependent to the event you analyse, the spacial scale on which it occurs, and even the climate model/s and experimental set up you use3

“….to combat this warming or at least the human causes which produce or aggravate it. It is true that there are other factors (such as volcanic activity, variations in the earth’s orbit and axis, the solar cycle), yet a number of scientific studies indicate that most global warming in recent decades is due to the great concentration of greenhouse gases (carbon dioxide, methane, nitrogen oxides and others) released mainly as a result of human activity.”

Jonathan Lauderdale, Postdoctoral Research Associate, MIT:
I think this statement is unnecessarily unclear and could be cherry-picked: “The Pope says volcanic activity, Earth’s orbit and the solar cycle cause global warming”.

While volcanic activity, changes in Earth’s orbit and the solar cycle can (and do) produce changes in climate, the recent trend of these forcings over the last couple of decades is probably towards net cooling.

Alexis Berg, Research Associate, Harvard University:
I find this statement a little weak. As mentioned above, natural factors would not lead to global warming over recent decades. Saying “a number of scientific studies” is a little bit of an understatement: it’s really almost all of the literature on the topic… The IPCC statement in the Summary for Policy Makers:

“It is extremely likely that more than half of the observed increase in global average surface temperature from 1951 to 2010 was caused by the anthropogenic increase in greenhouse gas concentrations and other anthropogenic forcings together. The best estimate of the human-induced contribution to warming is similar to the observed warming over this period. {10.3}”

“Another determining factor has been an increase in changed uses of the soil, principally deforestation for agricultural purposes.”

Andy Pitman, Director of the ARC Centre of Excellence for Climate System Science, The University of New South Wales:
This statement is correct. Deforestation leads to the emissions of greenhouse gases, a reduced absorption of gases and a range of other problems that adds to the problem of burning fossil fuels.

Jean-François Exbrayat, Post-doctoral Research Fellow, The University of Edinburgh:
Deforestation is principally the result of the agricultural expansion, for example soy bean and beef production in Brazil (1).

The conversion of forests to other types of land use leads to a release of greenhouse gases. Tropical deforestation alone emits around 0.57-1.22 Pg C y-1 (2) globally, or 7-14% of the total anthropogenic emissions. The large uncertainty is due to the complex interactions of multiple mechanisms that occur at different time scales such as instantaneous burning, and slower decay of slash residues (3). However, removing trees limits the capacity of the land surface to absorb atmospheric carbon dioxide and thereby reduces the ability of terrestrial ecosystems to act as long-term carbon stores.

“Concentrated in the atmosphere, these gases do not allow the warmth of the sun’s rays reflected by the earth to be dispersed in space.”

Alexis Berg, Research Associate, Harvard University:
This is really poorly phrased. If by “warmth of the sun’s rays reflected by the earth” one means something like “infrared radiation emitted by the earth when heated by the sun”, then okay – but that’s a stretch. As it is it makes it sound as if greenhouse gases trap reflected solar radiation…

Andy Pitman, Director of the ARC Centre of Excellence for Climate System Science, The University of New South Wales:
This statement is simply careless – sun’s rays reflected pass back out – its the suns rays absorbed and then re-emitted that get trapped. Its a basic error that should not exist.

Alexis Berg, Research Associate, Harvard University:
This is a bit confused, it seems. While melting ice caps (Greenland, Antarctica) and glaciers will lead to sea-level rise, I am unaware of the fact that it would lead to methane release. On the other hand, the “decomposition of frozen organic material” in, e.g., melting frozen soils of high latitudes (permafrost), could lead to carbon dioxide or methane release (depending on the hydrological conditions associated with this melting, i.e. aerobic or anaerobic).

“Things are made worse by the loss of tropical forests which would otherwise help to mitigate climate change.”

Jean-François Exbrayat, Post-doctoral Research Fellow, The University of Edinburgh:
Tropical deforestation contributes to climate change through the emission of greenhouse gases (see my above comment). Although regrowth and reforestation may partially offset these emissions, deforested areas will remain a long-term net source of greenhouse gases (1) unless complete regrowth is allowed.

“Carbon dioxide pollution increases the acidification of the oceans and compromises the marine food chain.”

Mark Eakin, Scientist, Coordinator of NOAA’s Coral Reef Watch, National Oceanic and Atmospheric Administration:
The combination of warming and acidification of the ocean is having tremendous consequences on organisms, ecosystems, ecosystem services, and human societies.

A recent review of the combined impacts of ocean warming and acidification on ocean chemistry and physics can be found in Howes et al. 2015

“However, many of these symptoms indicate that such effects will continue to worsen if we continue with current models of production and consumption.”

Alexis Berg, Research Associate, Harvard University:
Not only will global warming impacts worsen in the future, but it is worth underscoring that global impacts will likely not scale with global mean temperature change, i.e., the impacts of a 4 deg.C warming will not simply be twice as severe as those of a 2C warming.

“Each year sees the disappearance of thousands of plant and animal species which we will never know, which our children will never see, because they have been lost for ever.”

“Many of the world’s coral reefs are already barren or in a state of constant decline.”

Mark Eakin, Scientist, Coordinator of NOAA’s Coral Reef Watch, National Oceanic and Atmospheric Administration:
Coral reef decline has been well-documented and is accelerating due to the combination of local impacts and the global impacts of ocean warming and acidification due to anthropogenic increases in greenhouse gases.

“It is aggravated by the rise in temperature of the oceans.”

Mark Eakin, Scientist, Coordinator of NOAA’s Coral Reef Watch, National Oceanic and Atmospheric Administration:
We may have reached the point now where climate change has eclipsed the local impacts mentioned in the previous sentence as the greatest, most pervasive threat to coral reefs. See links above.