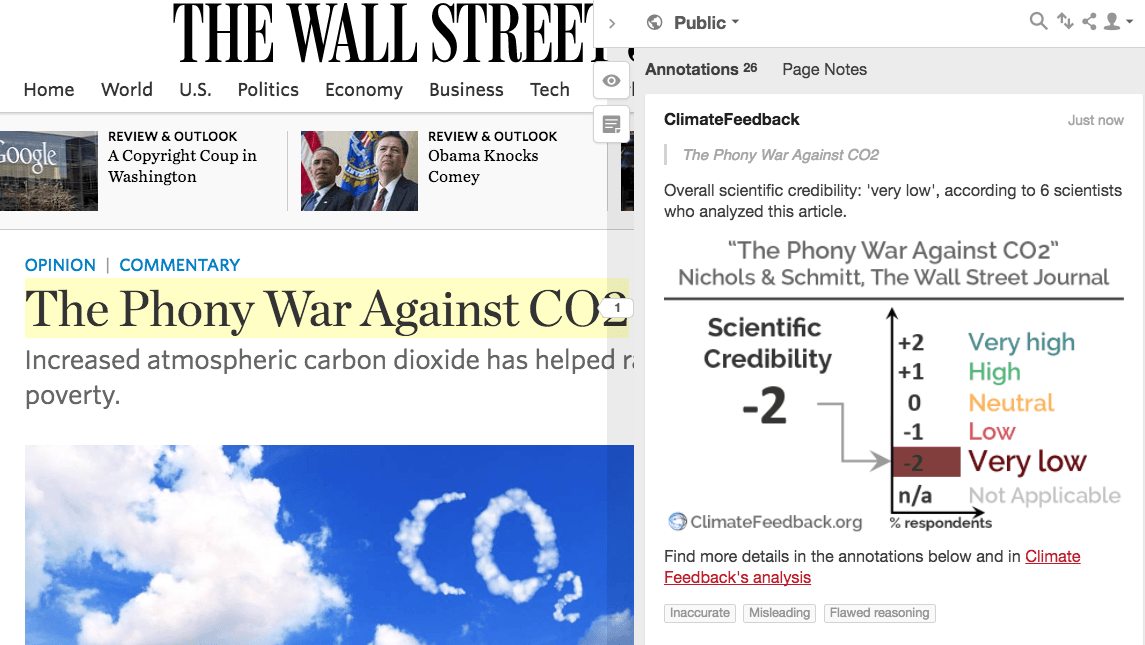 This commentary in the Wall Street Journal by Rodney Nichols and Harrison Schmitt tries to argue that CO2 emitted by humans is, overall, “beneficial”–particularly for agriculture. To do so, the authors ignore all the evidence of the negative impacts of increasing CO2 concentrations in the atmosphere (due to climate change and ocean acidification, for example). The commentary relies on claims that are not supported by any evidence, like the assertion that more CO2 in the atmosphere has helped to reduce poverty.

The authors invite the reader to “check the facts” but do not apply that maxim to themselves. Instead of referring to published scientific research, the article draws heavily from information created by an advocacy group that exists to promote CO2 emissions as beneficial. Taken as a whole, the body of scientific evidence clearly shows that this is not the case.

Wolfgang Cramer, Professor, Directeur de Recherche, Mediterranean Institute for Biodiversity and Ecology (IMBE):
The article speaks about scientific questions under an “opinion” banner—as if questions about the role of CO2 in the Earth system could be a matter of opinions. Virtually every single point in the article can be easily proven wrong by referral to standard textbook knowledge. For the major final conclusion “With more CO2 in the atmosphere, the challenge [to feed additional 2.5 billion people] can and will be met.“, there is absolutely no scientific credibility, nor support in the scientific literature—it is pure fantasy.

William Anderegg, Associate Professor, University of Utah:
The opinion article makes sweeping assertions that are not in line with the scientific understanding. The conclusions on CO2 uniformly benefiting agriculture are simply misleading—yes, CO2 can help plants but higher temperatures and more drought and pests with climate change also hurt plants.

Timothy Osborn, Professor, University of East Anglia, and Director of Research, Climatic Research Unit:
The article presents a biased view by understating the degree and impacts of global warming while overstating or simplifying the benefits of CO2 fertilisation.

James Renwick, Professor, Victoria University of Wellington:
The article is full of half-truths, untruths, and red herrings. Casting increased CO2 as a benefit to humankind, without considering the impacts and risks associated with a changing climate, is dangerous and irresponsible.

Lauren Simkins, Assistant Professor, University of Virginia:
The lack of distinction between the role of solid particulates and greenhouse gases in the atmosphere makes many of the authors’ claims false and misleading. The article does not present a complete or accurate discussion of climate change, its causes, and its societal influence. The authors state that readers should ‘check the facts’ regarding climate change, but have presented us with little scientific support for their own claims.

Victor Venema, Scientist, University of Bonn, Germany:
This has nothing to do with science.

The statements quoted below are from Harrison Schmitt and Rodney Nichols; comments and replies are from the reviewers.

1. The negative impacts of continued CO2 emissions are significant and serious. The authors only find human emissions of CO2 beneficial by ignoring all the reasons it is harmful.

“Unlike genuine pollutants, carbon dioxide (CO2) is an odorless, colorless gas. Every human being exhales about two pounds of CO2 a day, along with a similar amount of water vapor. CO2 is nontoxic to people and animals”

Timothy Osborn, Professor, University of East Anglia, and Director of Research, Climatic Research Unit:
This is a diversionary tactic: the concern about CO2 is not about its smell, its colour or its direct toxicity; instead it is about its effect on the Earth’s climate. So it is a strawman statement that may be easily demolished but not relevant to the concern about CO2 and climate change.

Victor Venema, Scientist, University of Bonn, Germany:
There are many toxic gases that are odorless and colorless. The best known one is, like CO2, also related to combustion: carbon monoxide (CO).

“But a myth persists that is both unscientific and immoral to perpetuate: that the beneficial gas carbon dioxide ranks among hazardous pollutants. It does not.”

James Renwick, Professor, Victoria University of Wellington:
This is semantics. Some call carbon dioxide a “pollutant” and others don’t. What is relevant is that the huge amount of CO2 that humanity has put into the atmosphere is changing the climate significantly. The hazard comes from changes to precipitation and extremes, leading to reduced food security and water availability. No wonder the Pentagon rates climate change as a critical threat to US national security. Just look at what’s happening in Syria and north Africa, on the back of a severe drought and a spike in food prices.

“[CO2] is also a greenhouse gas which helps maintain earth at a habitable temperature.”

Wolfgang Cramer, Professor, Directeur de Recherche, Mediterranean Institute for Biodiversity and Ecology (IMBE):
While the presence of CO2 has warmed the atmosphere to “habitable” temperatures, the additional increase of it will bring temperatures way outside habitable ranges in many regions including the oceans, as well as disturbing the water cycle and acidifying the oceans.

“But observations, such as those on our CO2 Coalition website, show that increased CO2 levels over the next century will cause modest and beneficial warming—perhaps as much as one degree Celsius (1.8 degrees Fahrenheit)”

James Renwick, Professor, Victoria University of Wellington:
That [1 °C warming] is an absolute best-case scenario, if significant mitigation action is taken urgently. Increased CO2 leads to warming, which leads to increased atmospheric water vapor, less ice, and other feedbacks. A doubling of CO2 concentrations would lead to about 3 °C warming.

Timothy Osborn, Professor, University of East Anglia, and Director of Research, Climatic Research Unit:
Projections of future warming can’t be made from observations alone: we need understanding of the mechanisms and physical processes. Neither of these are provided by the quoted website, which instead contains inaccurate articles about supposed adjustments to temperature data and claiming a new ‘little ice age’ is already here—both of which have been shown to be incorrect by scientific research. (For example, section 1.3.2 of the Fourth Assessment Working Group I IPCC report compared global temperature records from various vintages and found broad consistency.)

“The costs of emissions regulations, which will be paid by everyone, will be punishingly high and will provide no benefits to most people anywhere in the world.”

Lauren Simkins, Assistant Professor, University of Virginia:
This is simply not accurate. Global warming is a global issue that, for example, affects global coastal populations, marine ecology, crop stability, and the area of habitable land. Humans, especially in countries with the largest carbon emissions, have been successfully altering the entire Earth system; therefore, climate change is currently the most global issue that we face and will continue to face in the coming centuries.

Wolfgang Cramer, Professor, Directeur de Recherche, Mediterranean Institute for Biodiversity and Ecology (IMBE):
It is unclear what costs are referred to here. The regulations themselves cost nothing. The reductions of emissions will avoid huge damage costs and also produce economic benefits in other than the fossil-fuel dependent economic sectors. It is the damage costs that will be “paid by everyone”, not the emission reductions.

2. Continued CO2 emissions will not improve future crop production. The IPCC report concludes that the net result of further climate change will be to hinder global crop yields.

“In 2013 the level of U.S. farm output was about 2.7 times its 1948 level, and productivity was growing at an average annual rate of 1.52%. From 2001 to 2013, world-wide, global output of total crop and livestock commodities was expanding at an average rate of 2.52% a year[…] Along with better plant varieties, cropping practices and fertilizer, CO2 has contributed to this welcome increase in productivity.”

G Philip Robertson, Professor, Michigan State University:
In general, CO2 has had a positive effect on crop growth, but it’s impossible to separate historical effects from the greater effects of genetics and nitrogen and other inputs. However, it’s generally considered to be a fraction of those. We know better future effects because we have CO2 fertilization experiments in the field comparing present to future CO2 levels. Those experiments suggest that corn may have about a 1% gain [because of increased CO2] and soybeans 3-4 times that. However, these gains will almost certainly be offset by yield declines associated with the temperature increases caused by elevated CO2, which are well known.

“With more CO2 in the atmosphere, the challenge [feeding 2.5 billion more people] can and will be met.”

Wolfgang Cramer, Professor, Directeur de Recherche, Mediterranean Institute for Biodiversity and Ecology (IMBE):
There is absolutely no scientific study that would support such a conclusion. And even if there was no climate effect of CO2, a simple speculative growth enhancement by CO2 could not produce such an effect.

“Feeding these people and assuring them a comfortable living standard should be among our highest moral priorities.”

“When someone says, ‘climate science is settled,’ remind them to check the facts.”

James Renwick, Professor, Victoria University of Wellington:
The basic radiation physics has been well known for 150 years. The details will always be under discussion, but we are already seeing very clearly the expected patterns of climate change.

Lauren Simkins, Assistant Professor, University of Virginia:
This statement highlights the major problem with this article. The authors do not support their claims with scientific references and data. Their logic is flawed and does not take into account basic scientific theories that explain, for example, the role of certain gases in causing a greenhouse effect and the negative impacts of high levels of greenhouse gases in the atmosphere. […]

So based on this statement and the lack of scientific references in this article, readers should be prompted to disregard the majority of claims it presents.