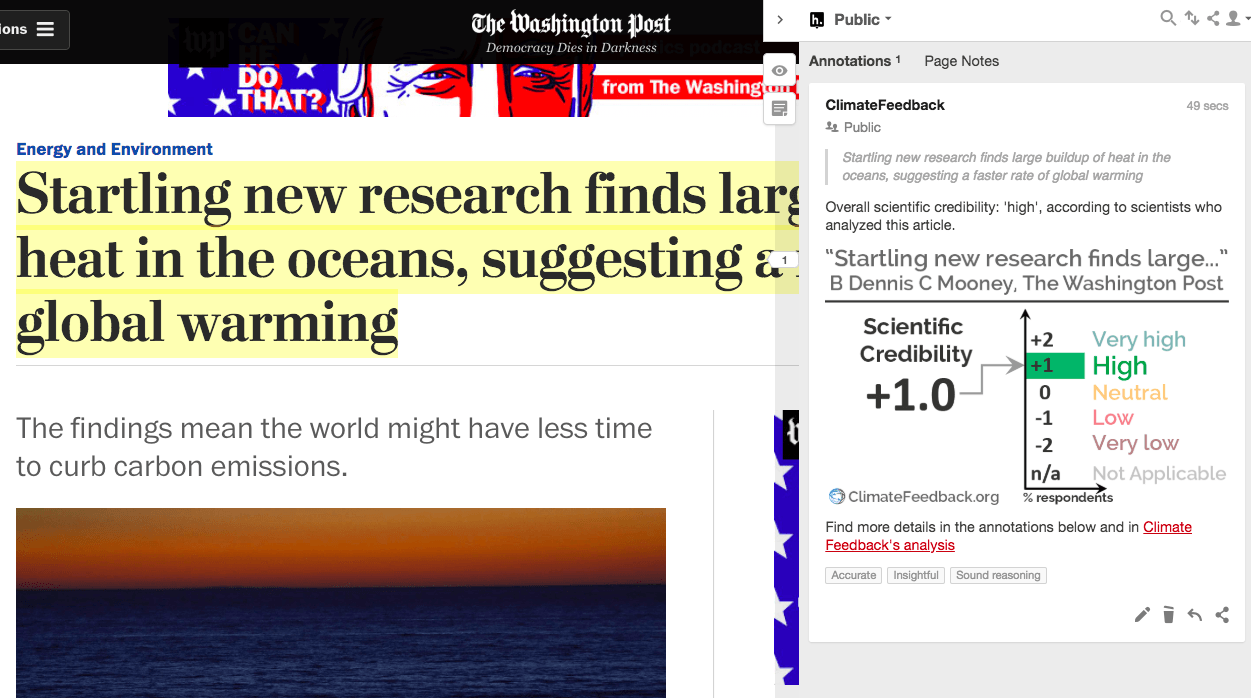 This article in The Washington Post covers a new study estimating the amount of heat energy that has accumulated in the ocean in recent decades. Such estimates have been limited because the most complete network of ocean temperatures did not exist until the 2000s. The new study uses an indirect method, instead relying on changes in atmospheric gases caused by warmer oceans. This method produces an estimate of ocean warming resulting from human activities that is similar to other estimates, within error bars.

Scientists who reviewed the article found that it did a good job of describing the study, while noting that the study’s conclusions (and implications) require additional investigation. In particular, discussion among scientists has focused on clarifying what impact this study’s results have on our understanding of climate sensitivity (how much warming occurs from a given amount of greenhouse gas emissions) and, consequently, how much the world can emit before reaching 2 °C warming.

UPDATE (14 Nov 2018): After this evaluation was published, the authors of the study corrected their results to account for mistakes in calculating error bars. While the study previously concluded that ocean warming was greater than earlier estimates showed, those older estimates are now within the expanded error bars of the new work. The summary text above was updated to accurately reflect this relationship. Reviewers’ comments below were based on coverage of the initial version of the study. Read more.

Mitch Lyle, Professor, Sr. Research, Oregon State University:
The authors use a novel ocean heat content estimate that depends on gas exchange and atmospheric oxygen content. The conclusion are interesting, that climate sensitivity may be underestimated, but their “thermometer” needs to be confirmed.

Pepijn Bakker, Assistant professor, Department of Earth Sciences, Vrije Universiteit, Netherlands:
The article gives a good and balanced representation of the main new scientific insights. What I find inappropriate about the title is that it suggests that a large buildup of heat in the oceans is a new finding. This has been known for a long time, but what is novel is that this heat buildup now appears much larger than previously assumed.

Mark Richardson, Research Associate, Colorado State University/NASA JPL:
This article covers a study1 that used precise measurements of gases in the air to infer ocean temperature change since 1991. This sounds crazy, but it’s basic physics that warming liquids release dissolved gases. The scientists accounted for other factors, checked against available ocean data and worked out that the oceans have sucked up more heat since 1991 than some other studies reported. The older studies often lacked data from the best instruments in places like the shallow seas around Indonesia so might have missed heat “hiding” in such regions2. The new study led by Dr. Resplandy of Princeton does not have this weakness and so is very credible.

The Washington Post article accurately reports the results and links to other topics using reliable sources. Quotations from Pieter Tans and Paul Durack add important caveats showing that this is strong new evidence but not the final say. This caution is vital for readers to interpret the findings.

The article then talks about what these results could mean for global warming and related political targets.

Most evidence, such as from satellite measurements of how clouds have changed with our warming climate3, suggest that we will see a lot more global warming from our emissions. By contrast, some simple “energy budget” calculations that used ocean heat data suggested less warming, but they relied on lower estimates of heat uptake with non-global measurements. The Post then reports how Resplandy’s new ocean heat findings would affect the “energy budget” results. The numbers they give are based on calculations from the research and are defensible.

I take issue with Durack’s quote that this “means the rate of warming and the sensitivity of the Earth’s system to greenhouse gases is at the upper end”. This is vague and probably overconfident: the data fit with a lot of warming in the pipeline, but plugging these numbers into one recent calculation4 could also imply relatively moderate future warming. This is overly harsh criticism for an article that tackles several tricky issues and, in my judgment, provides a well-supported and balanced discussion of a fascinating piece of new science.