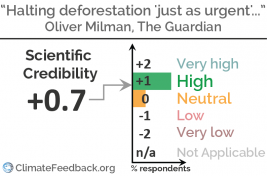 "The article correctly links estimates of current carbon dioxide emissions from land use and land cover change with fairly conservative estimates for potential carbon sequestration embedded in "natural climate solutions" as part of the climate mitigation strategy to avoid 1.5°C warming. Land-use and land-cover change is responsible for roughly 10-15% of total global carbon dioxide emissions. Forest management, reforestation, and afforestation where appropriate, is part of the climate mitigation portfolio assessed by Integrated Assessment Models used in the IPCC process." 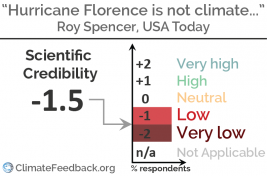 in USA Today, by Roy Spencer

This op-ed in USA Today makes the claim that Hurricane Florence has no appreciable contribution from human-caused climate change. Scientists who reviewed the article found that it ignores the evidence for trends in tropical cyclone behavior, including slower movement speed and more intense rainfall. Additionally, sea level rise raised the storm surge of the landfalling tropical cyclone above the level it would have reached a century ago. The article cherry-picks data in misleading way to claim that recent storms are no different from past tropical cyclones... 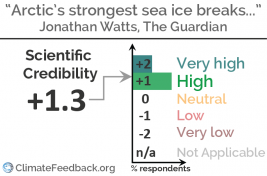 "The article is clear and accurate. The authors have consulted several experts in the field to develop this story. They provide a scientifically sound overview of the current sea ice state north of Greenland, its historical context, and what has caused this anomaly." 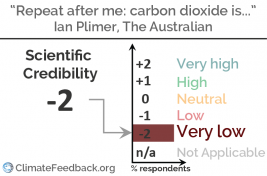 "This article is an amalgamation of logical fallacies, misleading talking points, and downright factually incorrect statements regarding the physics of the climate system. Every talking point in this article has been debunked many times over and it is astonishing that this was published." 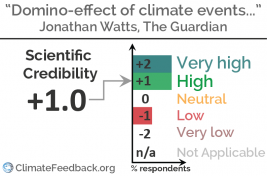 Guardian coverage of essay on potential of future “hothouse” climate is generally accurate, but misstates some details

"The article reasonably summarizes a new study published in PNAS, which describes the potential of tipping elements to enhance climate warming and the potential for the Earth to transition into a hot-house climate state. The article is careful to point out uncertainties and thus avoids being sensational. However, there are many small errors scattered throughout the article."

in The Washington Post, by Joel Achenbach, Angela Fritz

"This article accurately describes the broader climate context of recent heat extremes throughout the Northern Hemisphere. There are a couple spots where specific claims are somewhat stronger than justified by the existing scientific evidence, but in general the piece gives an accurate impression regarding the role of climate change and recent advances in extreme event attribution science." 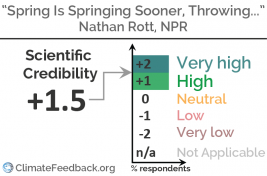 in NPR, by Nathan Rott

"This article at NPR discusses what happens when warm spring weather arrives earlier because of climate change. Animals must adjust to changes in the timing of plant flowering, for example, leading to noticeable desynchrony in the ecosystem..." 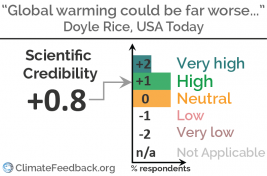 "An accurate and balanced article that gives readers a good flavour of the research but the reference to “Earth’s history” might confuse some when it otherwise refers to the studied period: the past 3.5 million years. Neatly explains a lot of the key points in a small word count, but..." 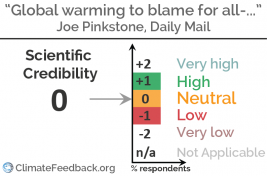 Daily Mail correctly reports that climate change leads to more severe heatwaves, but explanation of recent weather is off the mark

in Daily Mail, by Joe Pinkstone

"Mostly this article is accurate in its reporting of the recent heat over North America and Eurasia. However, there are a few misleading statements, including the headline, that exaggerate both the scale of the event and the likely role of climate change." 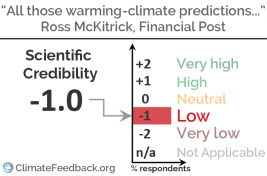 "This article selectively cherry-picks studies showing low climate sensitivity, leaving out whole lines of evidence (e.g. paleoclimate studies) that agree with the sensitivity estimates found in models. It also glosses over the many criticisms of instrumentally based (or “energy balance”) sensitivity estimates published in recent years."